NCERT Solutions for Class 10 Civics Chapter 4 – Gender, Religion and Caste (Social Science), contains solutions to various questions in Exercise for Chapter 4.  At the end of the Solutions, all the keywords which are important to understand Chapter 4 Gender, Religion and Caste Class 10 Civics, have been explained in a simple and easy to understand manner. We are providing NCERT Solutions for Class 10 all subjects which can be accessed by clicking here. 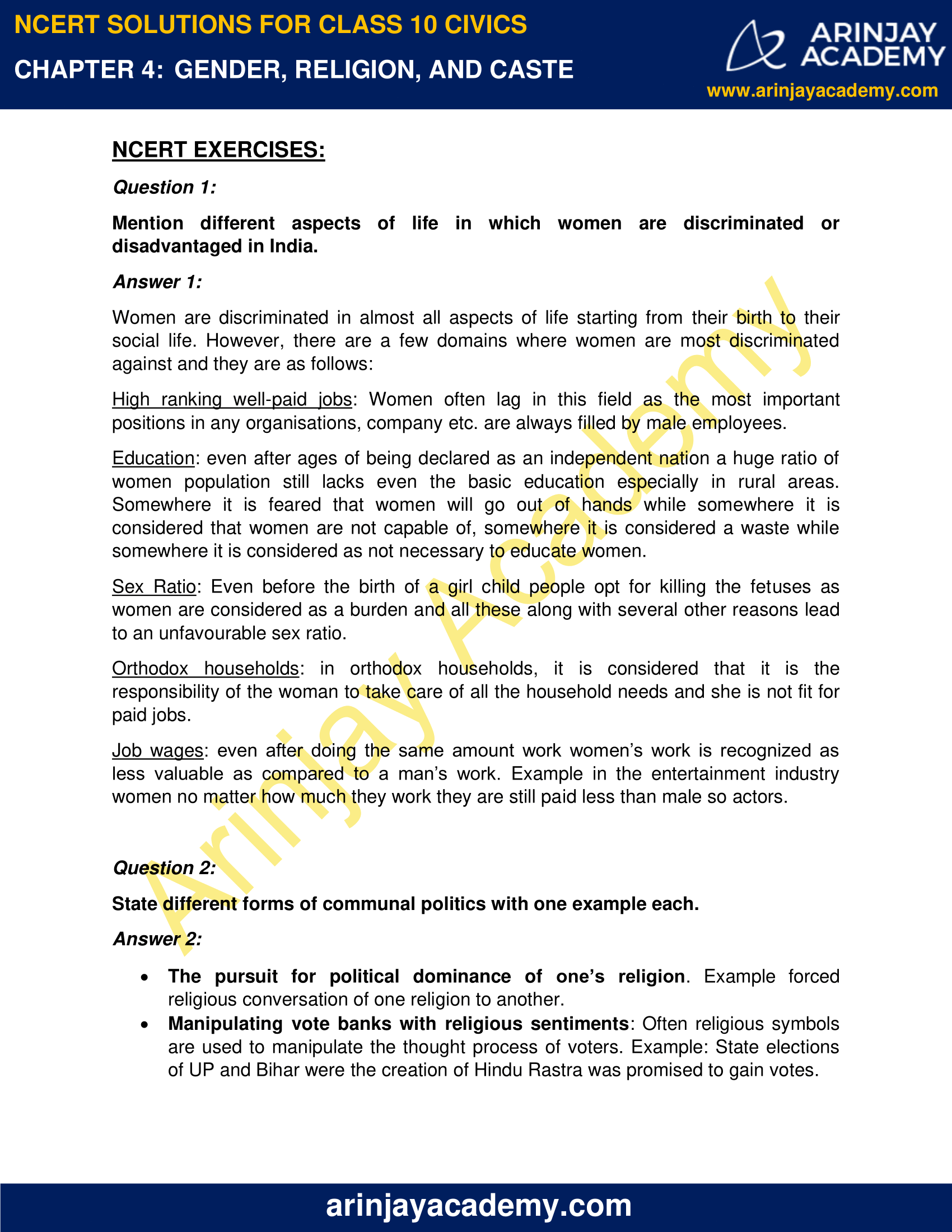 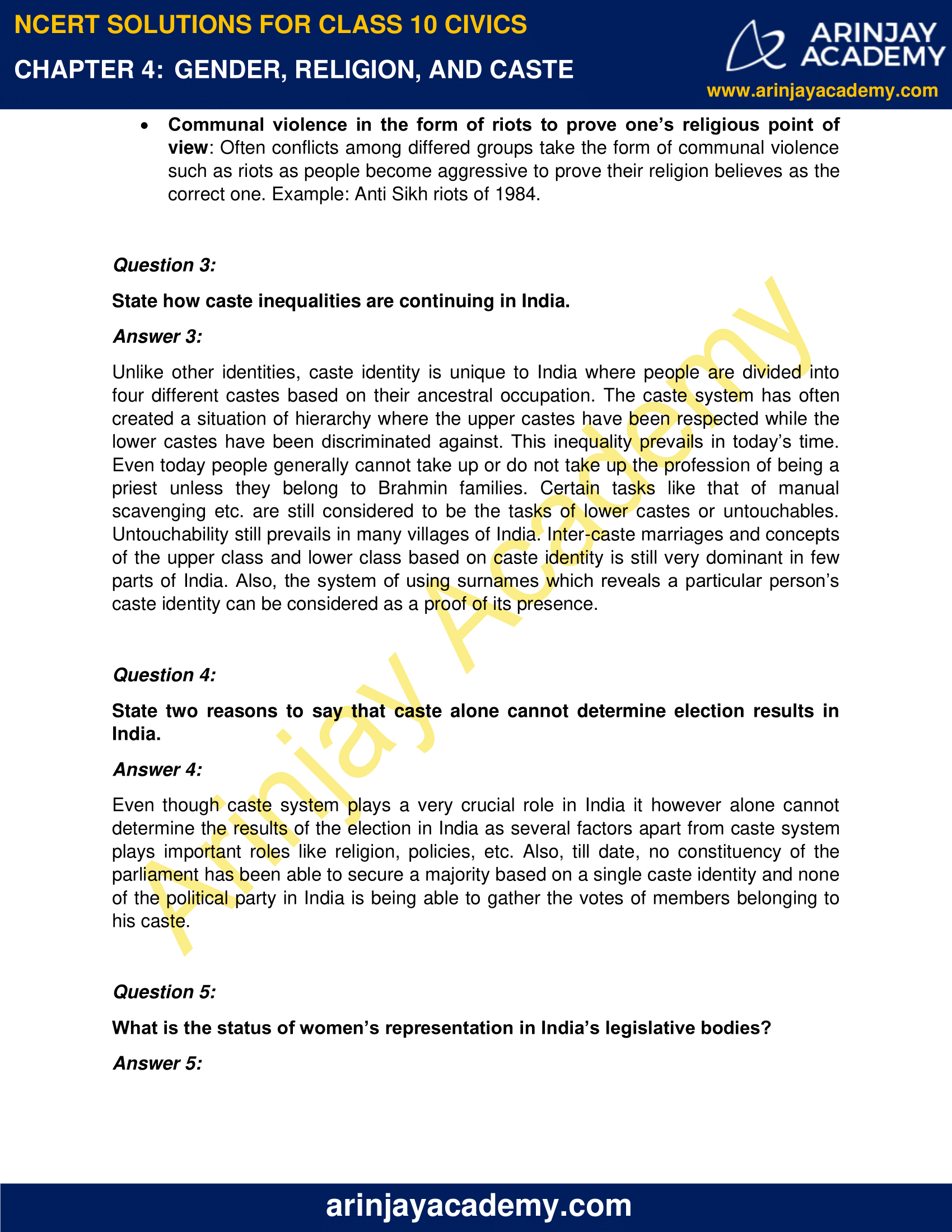 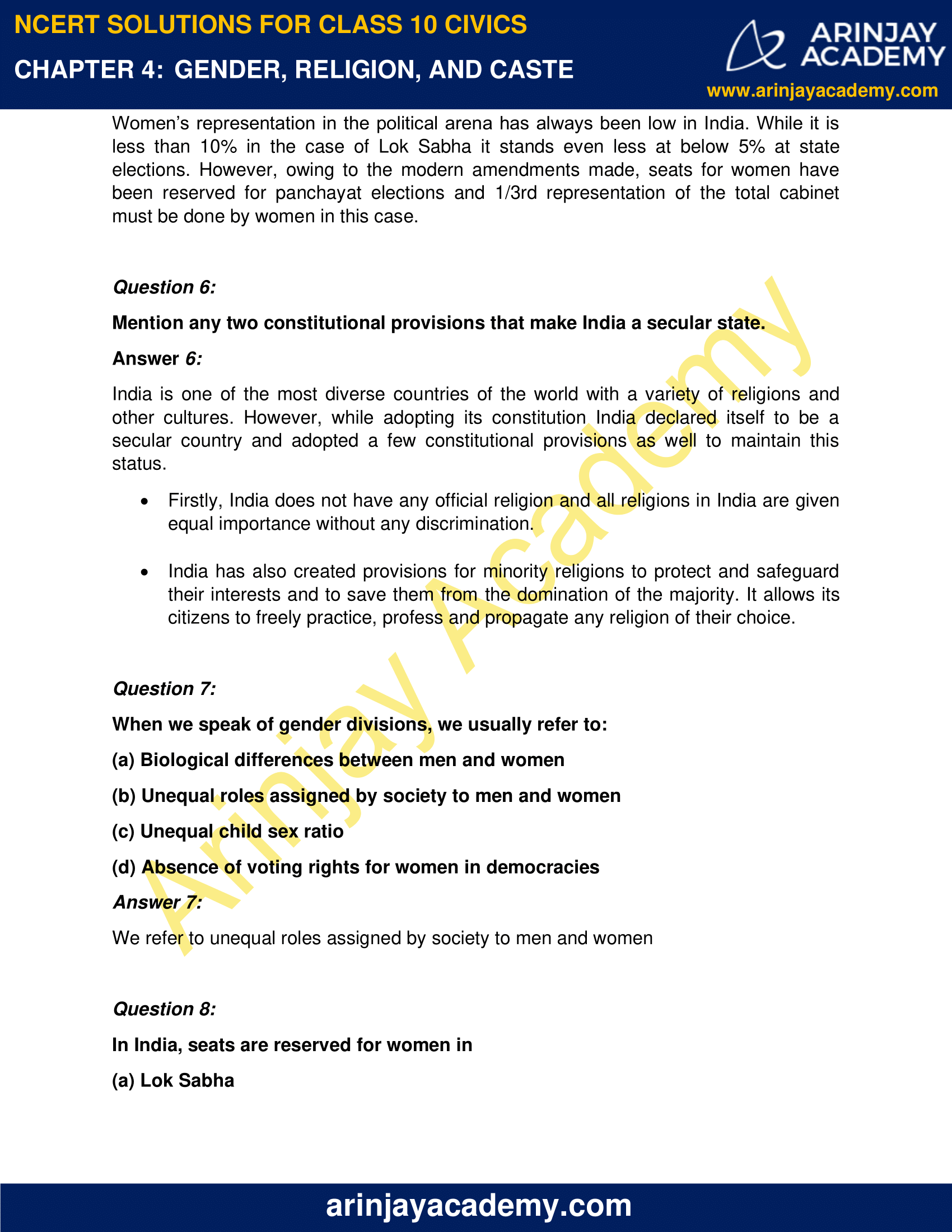 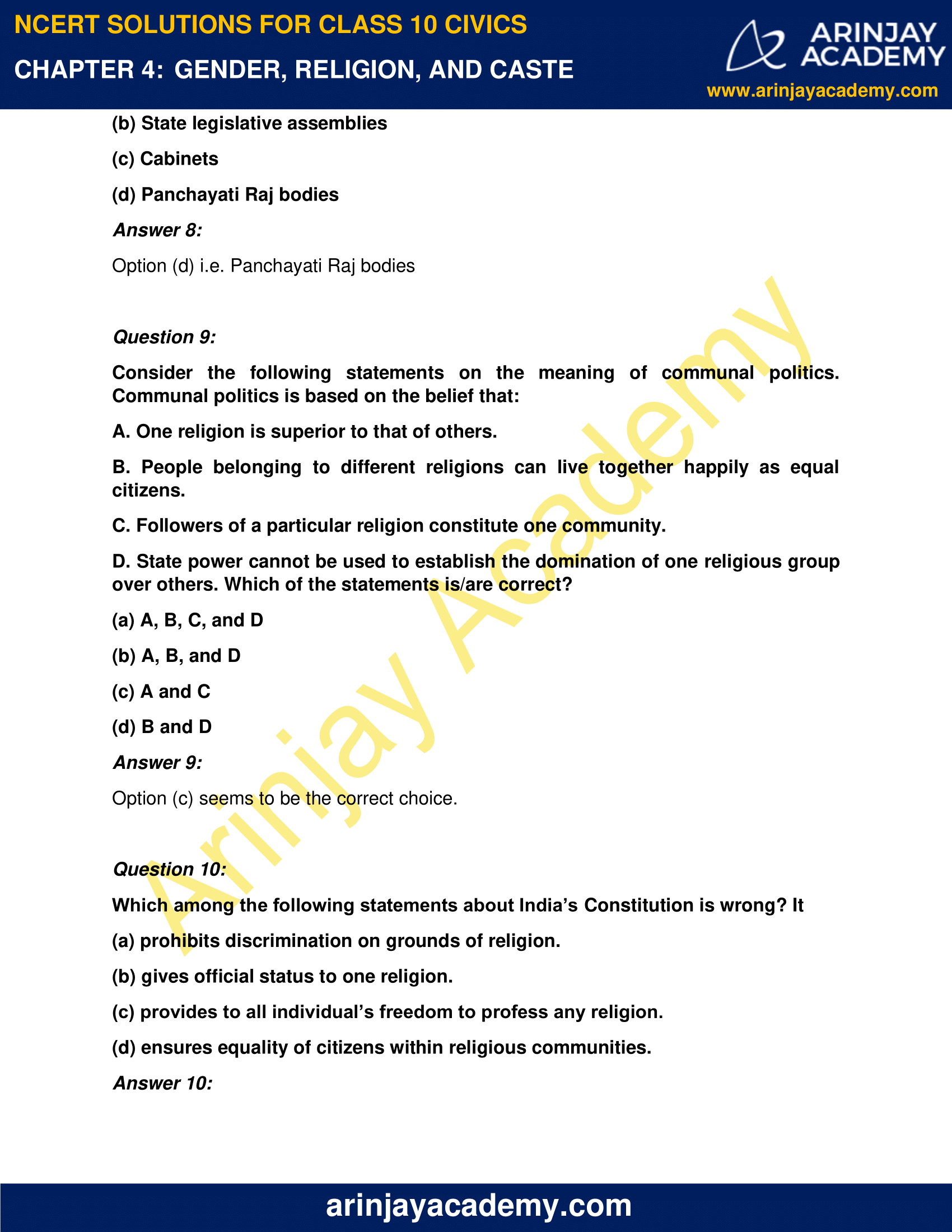 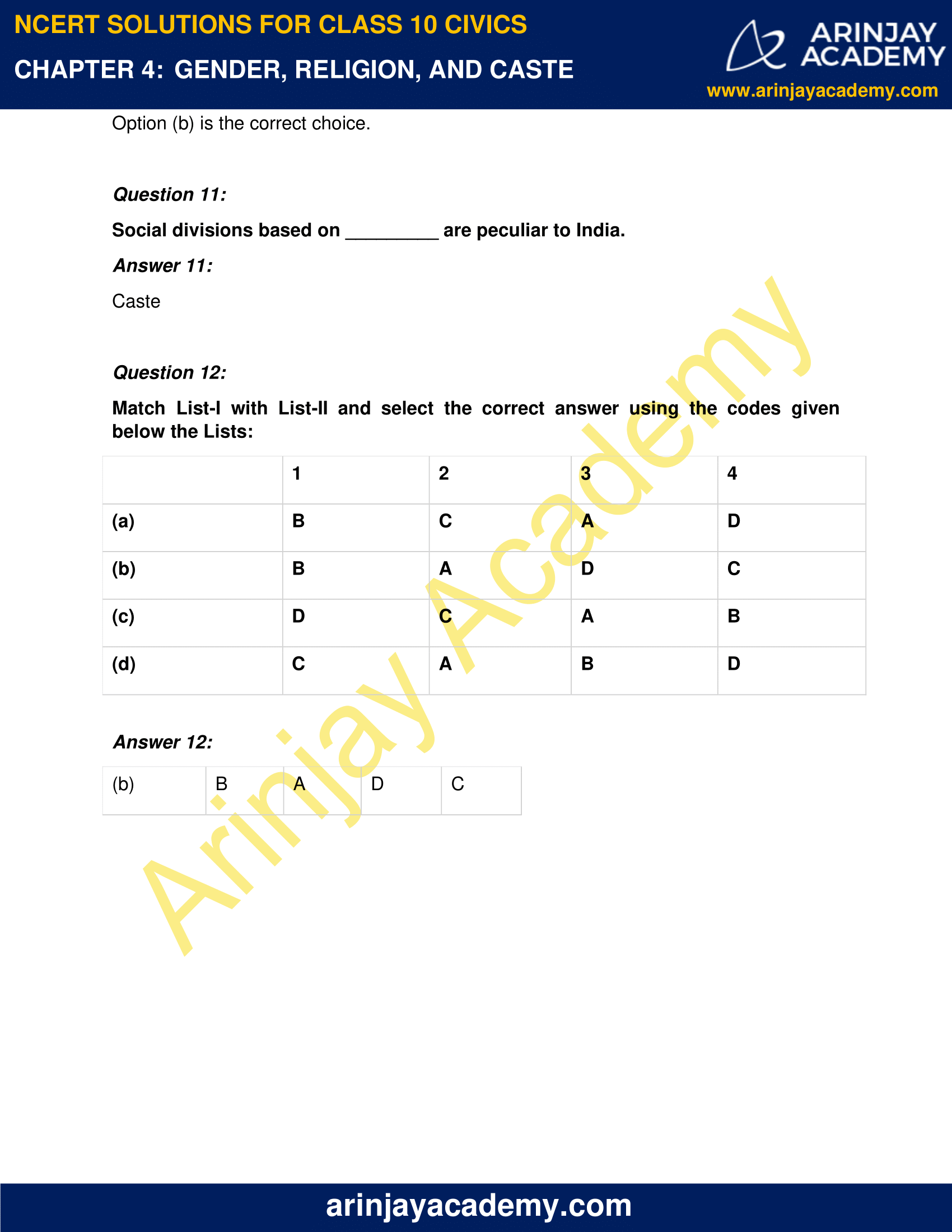 Mention different aspects of life in which women are discriminated or disadvantaged in India.

Women are discriminated in almost all aspects of life starting from their birth to their social life. However, there are a few domains where women are most discriminated against and they are as follows:

High ranking well-paid jobs: Women often lag in this field as the most important positions in any organisations, company etc. are always filled by male employees.

Sex Ratio: Even before the birth of a girl child people opt for killing the fetuses as women are considered as a burden and all these along with several other reasons lead to an unfavourable sex ratio.

Job wages: even after doing the same amount work women’s work is recognized as less valuable as compared to a man’s work. Example in the entertainment industry women no matter how much they work they are still paid less than male so actors.

State different forms of communal politics with one example each.

State how caste inequalities are continuing in India.

Unlike other identities, caste identity is unique to India where people are divided into four different castes based on their ancestral occupation. The caste system has often created a situation of hierarchy where the upper castes have been respected while the lower castes have been discriminated against. This inequality prevails in today’s time. Even today people generally cannot take up or do not take up the profession of being a priest unless they belong to Brahmin families. Certain tasks like that of manual scavenging etc. are still considered to be the tasks of lower castes or untouchables. Untouchability still prevails in many villages of India. Inter-caste marriages and concepts of the upper class and lower class based on caste identity is still very dominant in few parts of India. Also, the system of using surnames which reveals a particular person’s caste identity can be considered as a proof of its presence.

Even though caste system plays a very crucial role in India it however alone cannot determine the results of the election in India as several factors apart from caste system plays important roles like religion, policies, etc. Also, till date, no constituency of the parliament has been able to secure a majority based on a single caste identity and none of the political party in India is being able to gather the votes of members belonging to his caste.

What is the status of women’s representation in India’s legislative bodies?

Women’s representation in the political arena has always been low in India. While it is less than 10% in the case of Lok Sabha it stands even less at below 5% at state elections. However, owing to the modern amendments made, seats for women have been reserved for panchayat elections and 1/3rd representation of the total cabinet must be done by women in this case.

India is one of the most diverse countries of the world with a variety of religions and other cultures. However, while adopting its constitution India declared itself to be a secular country and adopted a few constitutional provisions as well to maintain this status.

When we speak of gender divisions, we usually refer to:

(a) Biological differences between men and women

(b) Unequal roles assigned by society to men and women

(d) Absence of voting rights for women in democracies

In India, seats are reserved for women in

A. One religion is superior to that of others.

B. People belonging to different religions can live together happily as equal citizens.

C. Followers of a particular religion constitute one community.

D. State power cannot be used to establish the domination of one religious group over others. Which of the statements is/are correct?

Option (c) seems to be the correct choice.

Which among the following statements about India’s Constitution is wrong? It

(a) prohibits discrimination on grounds of religion.

(b) gives official status to one religion.

(c) provides to all individual’s freedom to profess any religion.

Option (b) is the correct choice.

Match List-I with List-II and select the correct answer using the codes given below the Lists:

Patriarchy: It refers to a male-dominated society.

Family Laws: Laws that revolve around the domain of family and looks after legal requirements of institutions like marriage, divorce, adoption etc. are known as family laws.

Caste Hierarchy: It refers to the pyramid of the different castes that people belong to like Brahmins, Kshatriyas, Vaishyas and Sudras.