NCERT Solutions for Class 7 Science Chapter 13 – Motion and Time, contains solutions to various questions in Exercise for Chapter 13.  At the end of the Solutions, all the keywords and Notes which are important to understand Science Chapter 13 Motion and Time Class 7, have been explained in a simple and easy to understand manner. We are providing NCERT Solutions for Class 7 all subjects which can be accessed by clicking here. 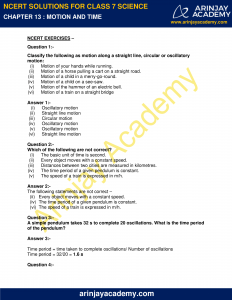 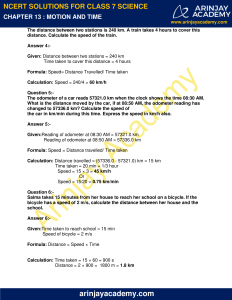 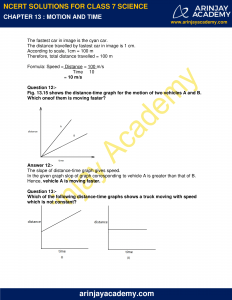 Classify the following as motion along a straight line, circular or oscillatory motion:

(i) Motion of your hands while running.

(ii) Motion of a horse pulling a cart on a straight road.

(iii) Motion of a child in a merry-go-round.

(v) Motion of the hammer of an electric bell.

(vi) Motion of a train on a straight bridge

Which of the following are not correct?

(i) The basic unit of time is second.

(ii) Every object moves with a constant speed.

(iii) Distances between two cities are measured in kilometres.

(iv) The time period of a given pendulum is constant.

(v) The speed of a train is expressed in m/h.

The following statements are not correct –

(ii)   Every object moves with a constant speed.

(iv)  The time period of a given pendulum is constant.

(vi)  The speed of a train is expressed in m/h.

A simple pendulum takes 32 s to complete 20 oscillations. What is the time period of the pendulum?

The distance between two stations is 240 km. A train takes 4 hours to cover this distance. Calculate the speed of the train.

Given: Distance between two stations = 240 km

Salma takes 15 minutes from her house to reach her school on a bicycle. If the bicycle has a speed of 2 m/s, calculate the distance between her house and the school.

Show the shape of the distance-time graph for the motion in the following cases:

(i) A car moving with a constant speed. 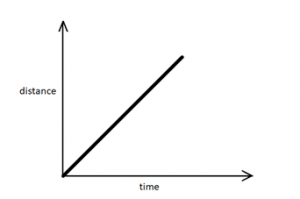 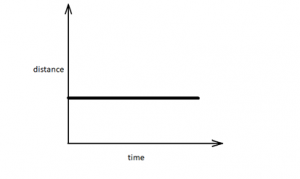 Which of the following relations is correct?

The basic unit of speed is:

Suppose the two photographs, shown in Fig. 13.1 and Fig. 13.2, had been taken at an interval of 10 seconds. If a distance of 100 metres is shown by 1 cm in these photographs, calculate the speed of the fastest car. 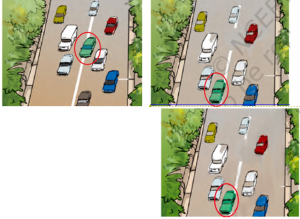 The fastest car in image is the cyan car.

The distance travelled by fastest car in image is 1 cm.

Fig. 13.15 shows the distance-time graph for the motion of two vehicles A and B. Which oneof them is moving faster? 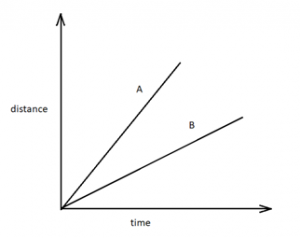 In the given graph slop of graph corresponding to vehicle A is greater than that of B. Hence, vehicle A is moving faster.

Which of the following distance-time graphs shows a truck moving with speed which is not constant?

The graph given in option (iii) is not moving with constant speed.

The distance-time graph of object moving with constant speed is a straight line. Graphs given in option (i), (ii), (iv) are straight line graphs. Hence, (iii) is the answer.

Bar graph: It is a type of graph in which data is represented by drawing rectangular bars.

Graphs: It is a method to represent data to make it look interesting and easy to interpret.

Oscillation: The to and fro motion of any object about an axis is called oscillatory motion.

Simple pendulum: It is an instrument that oscillates about an axis. It consists of a weight suspended from a point with the help of a string.

Speed: Speed of an object is the distance travelled by that object per unit time.

Time period: The time taken by a single oscillation of any instrument is called time period of that instrument.

Uniform motion: The motion in which the speed of an object remains constant with time is called uniform motion.

Unit of time: The SI unit of time is seconds. It is represented by s. Other units of time include minutes, hours etc.