NCERT Solutions for Class 7 Science Chapter 10 – Respiration in Organisms, contains solutions to various questions in Exercise for Chapter 10.  At the end of the Solutions, all the keywords and Notes which are important to understand Science Chapter 10 – Respiration in Organisms, have been explained in a simple and easy to understand manner. We are providing NCERT Solutions for Class 7 all subjects which can be accessed by clicking here. 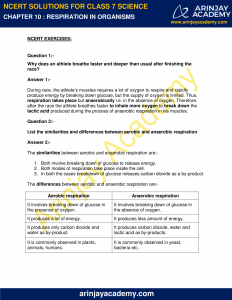 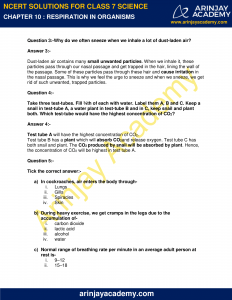 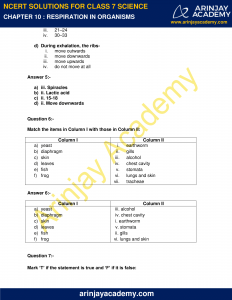 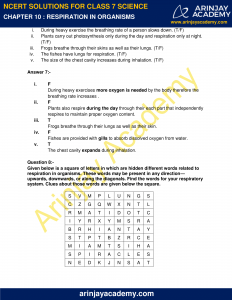 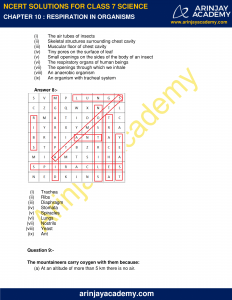 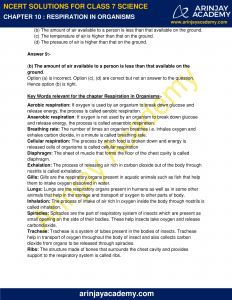 Why does an athlete breathe faster and deeper than usual after finishing the race?

During race, the athlete’s muscles requires a lot of oxygen to respire and rapidly produce energy by breaking down glucose, but the supply of oxygen is limited. Thus, respiration takes place but anaerobically i.e. in the absence of oxygen. Therefore, after the race the athlete breathes faster to inhale more oxygen to break down the lactic acid produced during the process of anaerobic respiration in his muscles.

List the similarities and differences between aerobic and anaerobic respiration.

The similarities between aerobic and anaerobic respiration are:-

The differences between aerobic and anaerobic respiration are:-

Question 3:-Why do we often sneeze when we inhale a lot of dust-laden air?

Take three test-tubes. Fill ¾th of each with water. Label them A, B and C. Keep a snail in test-tube A, a water plant in test-tube B and in C, keep snail and plant both. Which test-tube would have the highest concentration of CO2?

Test tube A will have the highest concentration of CO2.

Test tube B has a plant which will absorb CO2and release oxygen. Test tube C has both snail and plant. The CO2 produced by snail will be absorbed by plant. Hence, the concentration of CO2 will be highest in test tube A.

(b)During heavy exercise, we get cramps in the legs due to the

(iv)do not move at all

Mark ‘T’ if the statement is true and ‘F’ if it is false:

(i)During heavy exercise the breathing rate of a person slows down. (T/F)

(ii)Plants carry out photosynthesis only during the day and respiration only at night. (T/F)

(iii)Frogs breathe through their skins as well as their lungs. (T/F)

(v)The size of the chest cavity increases during inhalation. (T/F)

During heavy exercises more oxygen is needed by the body therefore the breathing rate increases .

Plants also respire during the day through their each part that independently respires to maintain proper oxygen content.

Frogs breathe through their lungs as well as their skin.

Fishes are provided with gills to absorb dissolved oxygen from water.

The chest cavity expands during inhalation.

Given below is a square of letters in which are hidden different words related to respiration in organisms. These words may be present in any direction— upwards, downwards, or along the diagonals. Find the words for your respiratory system. Clues about those words are given below the square. 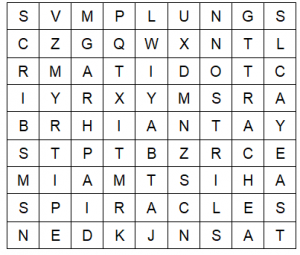 (iv)Tiny pores on the surface of leaf

(vii)The openings through which we inhale 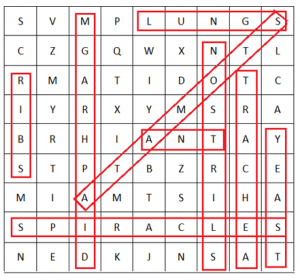 The mountaineers carry oxygen with them because:

(a)At an altitude of more than 5 km there is no air.

(b)The amount of air available to a person is less than that available on the ground.

(c)The temperature of air is higher than that on the ground.

(d)The pressure of air is higher than that on the ground.

(b) The amount of air available to a person is less than that available on the ground.

Option (a) is incorrect. Option (c), (d) are correct but not an answer to the question. Hence option (b) is right.

Breathing rate: The number of times an organism breathes i.e. inhales oxygen and exhales carbon dioxide, in a minute is called breathing rate.

Diaphragm: The sheet of muscle that forms the floor of the chest cavity is called diaphragm.

Exhalation: The process of releasing air rich in carbon dioxide out of the body through nostrils is called exhalation.

Gills: Gills are the respiratory organs present in aquatic animals such as fish that help them to intake oxygen dissolved in water.

Lungs: Lungs are the respiratory organs present in humans as well as in some other animals that help in the storage and transport of oxygen to other parts of body.

Inhalation: The process of intake of air rich in oxygen inside the body through nostrils is called inhalation.

Spiracles: Spiracles are the part of respiratory system of insects which are present as small opening on the side of their bodies. These help insects take oxygen and release carbondioxide.

Tracheae: Tracheae is a system of tubes present in the bodies of insects. Tracheae help in transport of oxygen throughout the body of insect and also collects carbon dioxide from organs to be released through spiracles.

Ribs: The structure made of bones that surrounds the chest cavity and provides support to the respiratory system is called ribs.