NCERT Solutions for Class 6 Civics Chapter 7 – Urban Administration (Social Science), contains solutions to various questions in Exercise for Chapter 7.  At the end of the Solutions, all the keywords and Notes which are important to understand Chapter 7 Urban Administration Class 6 Civics, have been explained in a simple and easy to understand manner. We are providing NCERT Solutions for Class 6 all subjects which can be accessed by clicking here. 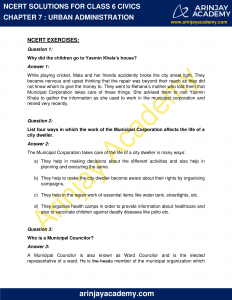 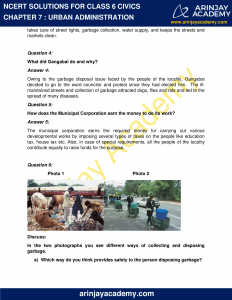 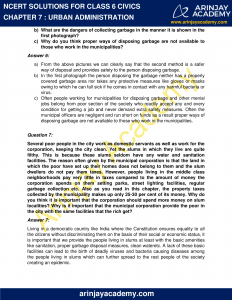 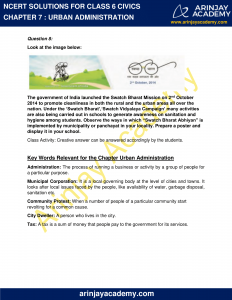 Why did the children go to Yasmin Khala’s house?

While playing cricket, Mala and her friends accidently broke the city street light. They became nervous and upset thinking that the repair was beyond their reach as they did not know whom to give the money to. They went to Rehana’s mother who told them that Municipal Corporation takes care of these things. She advised them to visit Yasmin Khala to gather the information as she used to work in the municipal corporation and retired very recently.

List four ways in which the work of the Municipal Corporation affects the life of a city dweller.

The Municipal Corporation takes care of the life of a city dweller in many ways:

(a)They help in making decisions about the different activities and also help in planning and executing the same.

(b)They help to make the city dweller become aware about their rights by organising campaigns.

(d)They organize health camps in order to provide information about healthcare and also to vaccinate children against deadly diseases like polio etc.

Who is a Municipal Councilor?

A Municipal Councilor is also known as Ward Councilor and is the elected representative of a ward. He is a member of the municipal organization which takes care of street lights, garbage collection, water supply, and keeps the streets and markets clean.

What did Gangabai do and why?

Owing to the garbage disposal issue faced by the people of the locality, Gangabai decided to go to the ward councilor and protest since they had elected him.  The ill-maintained streets and collection of garbage attracted dogs, flies and rats and led to the spread of many diseases.

How does the Municipal Corporation earn the money to do its work?

The municipal corporation earns the required money for carrying out various developmental works by imposing several types of taxes on the people like education tax, house tax etc. Also, in case of special requirements, all the people of the locality contribute equally to raise funds for the purpose.

In the two photographs you see different ways of collecting and disposing garbage.

(a)Which way do you think provides safety to the person disposing garbage?

(b)What are the dangers of collecting garbage in the manner it is shown in the first photograph?

(c)Why do you think proper ways of disposing garbage are not available to those who work in the municipalities?

(a)From the above pictures we can clearly say that the second method is a safer way of disposal and provides safety to the person disposing garbage.

(b)In the first photograph the person disposing the garbage neither has a properly covered garbage area nor takes any protective measures like gloves or masks owing to which he can fall sick if he comes in contact with any harmful bacteria or virus.

Several poor people in the city work as domestic servants as well as work for the corporation, keeping the city clean. Yet the slums in which they live are quite filthy. This is because these slums seldom have any water and sanitation facilities. The reason often given by the municipal corporation is that the land in which the poor have set up their homes does not belong to them and the slum dwellers do not pay them taxes. However, people living in the middle class neighborhoods pay very little in taxes compared to the amount of money the corporation spends on them setting parks, street lighting facilities, regular garbage collection etc. Also as you read in this chapter, the property taxes collected by the municipality makes up only 25-30 per cent of its money. Why do you think it is important that the corporation should spend more money on slum localities? Why is it important that the municipal corporation provide the poor in the city with the same facilities that the rich get?

Living in a democratic country like India where the Constitution ensures equality to all the citizens without discriminating them on the basis of their social or economic status, it is important that we provide the people living in slums at least with the basic amenities like sanitation, proper garbage disposal measures, clean wateretc. A lack of these basic facilities can lead to the birth of deadly viruses and bacteria causing diseases among the people living in slums which can further spread to the rest people of the society creating an epidemic.

Look at the image below:

The government of India launched the Swatch Bharat Mission on 2nd October 2014 to promote cleanliness in both the rural and the urban areas all over the nation. Under the ‘Swatch Bharat’,‘Swatch Vidyalaya Campaign’ many activities are also being carried out in schools to generate awareness on sanitation and hygiene among students. Observe the ways in which “Swatch Bharat Abhiyan” is implemented by municipality or panchayat in your locality. Prepare a poster and display it in your school.

Class Activity: Creative answer can be answered accordingly by the students.

Administration: The process of running a business or activity by a group of people for a particular purpose.

Municipal Corporation: It is a local governing body at the level of cities and towns. It looks after local issues faced by the people, like availability of water, garbage disposal, sanitation etc.

Community Protest: When a number of people of a particular community start revolting for a common cause.

City Dweller: A person who lives in the city.

Tax: A tax is a sum of money that people pay to the government for its services.