NCERT Solutions for Class 6 Civics Chapter 2-Diversity and Discrimination (Social Science), contains solutions to various questions in Exercise for Chapter 2.  At the end of the Solutions, all the keywords and Notes which are important to understand Diversity and Discrimination Class 6 Civics, have been explained in a simple and easy to understand manner. We are providing NCERT Solutions for Class 6 all subjects which can be accessed by clicking here. 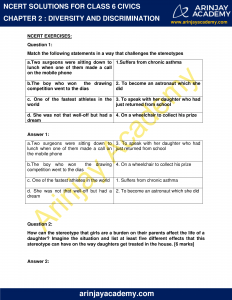 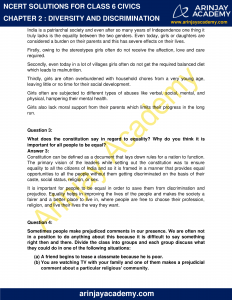 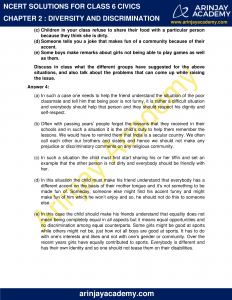 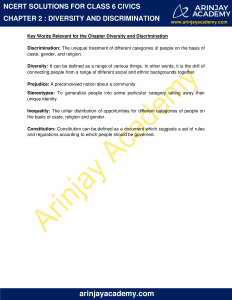 Match the following statements in a way that challenges the stereotypes

How can the stereotype that girls are a burden on their parents affect the life of a daughter? Imagine the situation and list at least five different effects that this stereotype can have on the way daughters get treated in the house. [6 marks]

India is a patriarchal society and even after so many years of Independence one thing it truly lacks is the equality between the two genders. Even today, girls or daughters are considered a burden on their parents and this has severe effects on their lives.

Firstly, owing to the stereotypes girls often do not receive the affection, love and care required.

Secondly, even today in a lot of villages girls often do not get the required balanced diet which leads to malnutrition.

Thirdly, girls are often overburdened with household chores from a very young age, leaving little or no time for their social development.

Girls often are subjected to different types of abuses like verbal, social, mental, and physical, hampering their mental health.

Girls also lack moral support from their parents which limits their progress in the long run.

What does the constitution say in regard to equality? Why do you think it is important for all people to be equal?

Constitution can be defined as a document that lays down rules for a nation to function. The primary vision of the leaders while setting out the constitution was to ensure equality to all the citizens of India and so it is framed in a manner that provides equal opportunities to all the people without them getting discriminated on the basis of their caste, social status, religion, or sex.

It is important for people to be equal in order to save them from discrimination and prejudice. Equality helps in improving the lives of the people and makes the society a fairer and a better place to live in, where people are free to choose their profession, religion, and live their lives the way they want.

Sometimes people make prejudiced comments in our presence. We are often not in a position to do anything about this because it is difficult to say something right then and there. Divide the class into groups and each group discuss what they could do in one of the following situations:

(a)A friend begins to tease a classmate because he is poor.

(b)You are watching TV with your family and one of them makes a prejudicial comment about a particular religious’ community.

(c) Children in your class refuse to share their food with a particular person because they think she is dirty.

(d) Someone tells you a joke that makes fun of a community because of their accent.

(e) Some boys make remarks about girls not being able to play games as well as them.

Discuss in class what the different groups have suggested for the above situations, and also talk about the problems that can come up while raising the issue.

(a)In such a case one needs to help the friend understand the situation of the poor classmate and tell him that being poor is not funny, it is rather a difficult situation and everybody should help that person and they should respect his dignity and self-respect.

(b)Often with passing years’ people forget the lessons that they received in their schools and in such a situation it is the child’s duty to help them remember the lessons. We would have to remind them that India is a secular country. We often call each other our brothers and sisters and hence we should not make any prejudice or discriminatory comments on any religious community.

(c)In such a situation the child must first start sharing his or her tiffin and set an example that the other person is not dirty and everybody should be friendly with her.

(d)In this situation the child must make his friend understand that everybody has a different accent on the basis of their mother tongue and it’s not something to be made fun of. Someday, someone else might find his accent funny and might make fun of him which he won’t enjoy and so, he should not do this to someone else.

(e)In this case the child should make his friends understand that equality does not mean being completely equal in all aspects but it means equal opportunities and no discrimination among equal counterparts. Some girls might be good at sports while others might not be, just how not all boys are good at sports. It has to do with one’s interests and likes and not with one’s gender or community. Over the recent years girls have equally contributed to sports. Everybody is different and has their own identity and so one should not tease them on their disabilities.

Discrimination: The unequal treatment of different categories of people on the basis of caste, gender, and religion.

Diversity: It can be defined as a range of various things. In other words, it is the drill of connecting people from a range of different social and ethnic backgrounds together.

Prejudice: A preconceived notion about a community.

Stereotypes: To generalize people into some particular category taking away their unique identity.

Inequality: The unfair distribution of opportunities for different categories of people on the basis of caste, religion and gender.

Constitution: Constitution can be defined as a document which suggests a set of rules and regulations according to which people should be governed.