NCERT Solutions for Class 6 Civics Chapter 5-Panchayati Raj (Social Science), contains solutions to various questions in Exercise for Chapter 5.  At the end of the Solutions, all the keywords and Notes which are important to understand Chapter 5 Panchayati Raj Class 6 Civics, have been explained in a simple and easy to understand manner. We are providing NCERT Solutions for Class 6 all subjects which can be accessed by clicking here. 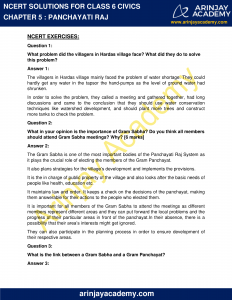 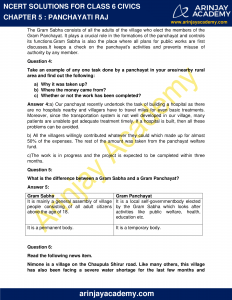 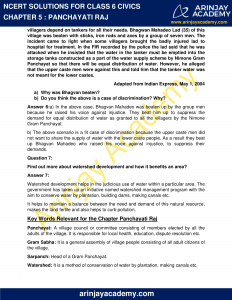 NCERT Solutions for Class 6 Civics Chapter 5-Panchayati Raj Exercises includes – Questions/Answers which helps you to understand the topic covered in Panchayati Raj Class 6 Civics (Social Science), in a better manner to help you to score good marks in your examinations.

What problem did the villagers in Hardas village face? What did they do to solve this problem?

The villagers in Hardas village mainly faced the problem of water shortage. They could hardly get any water in the tapsor the hand-pumps as the level of ground water had shrunken.

In order to solve the problem, they called a meeting and gathered together, had long discussions and came to the conclusion that they should use water conservation techniques like watershed development, and should plant more trees and construct more tanks to check the problem.

What in your opinion is the importance of Gram Sabha? Do you think all members should attend Gram Sabha meetings? Why? [6 marks]

The Gram Sabha is one of the most important bodies of the Panchayati Raj System as it plays the crucial role of electing the members of the Gram Panchayat.

It also plans strategies for the village’s development and implements the provisions.

It is the in charge of public property of the village and also looks after the basic needs of people like health, education etc.

It maintains law and order. It keeps a check on the decisions of the panchayat, making them answerable for their actions to the people who elected them.

It is important for all members of the Gram Sabha to attend the meetings as different members represent different areas and they can put forward the local problems and the progress of their particular areas in front of the panchayat.In their absence, there is a possibility that their area’s interests might get ignored.

They can also participate in the planning process in order to ensure development of their respective areas.

What is the link between a Gram Sabha and a Gram Panchayat?

The Gram Sabha consists of all the adults of the village who elect the members of the Gram Panchayat. It plays a crucial role in the formations of the panchayat and controls its functions.Gram Sabha is also the place where all plans for public works are first discusses.It keeps a check on the panchayat’s activities and prevents misuse of authority by any member.

Take an example of any one task done by a panchayat in your area/nearby rural area and find out the following:

a) Our panchayat recently undertook the task of building a hospital as there are no hospitals nearby and villagers have to travel miles for even basic treatments. Moreover, since the transportation system is not well developed in our village, many patients are unableto get adequate treatment timely. If a hospital is built, then all these problems can be avoided.

b) All the villagers willingly contributed whatever they could which made up for almost 50% of the expenses. The rest of the amount was taken from the panchayat welfare fund.

c)The work is in progress and the project is expected to be completed within three months.

What is the difference between a Gram Sabha and a Gram Panchayat?

Nimone is a village on the Chaupula Shirur road. Like many others, this village has also been facing a severe water shortage for the last few months and villagers depend on tankers for all their needs. Bhagwan Mahadeo Lad (35) of this village was beaten with sticks, iron rods and axes by a group of seven men. The incident came to light when some villagers brought the badly injured lad to hospital for treatment. In the FIR recorded by the police the lad said that he was attacked when he insisted that the water in the tanker must be emptied into the storage tanks constructed as a part of the water supply scheme by Nimone Gram Panchayat so that there will be equal distribution of water. However, he alleged that the upper caste men were against this and told him that the tanker water was not meant for the lower castes.

(b)Do you think the above is a case of discrimination? Why?

(a) In the above case, Bhagvan Mahadeo was beaten up by the group men because he raised his voice against injustice. They beat him up to suppress the demand for equal distribution of water as granted to all the villagers by the Nimone Gram Panchayat.

(b) The above scenario is a fit case of discrimination because the upper caste men did not want to share the supply of water with the lower caste people. As a result they beat up Bhagvan Mahadeo who raised his voice against injustice, to suppress their demands.

Find out more about watershed development and how it benefits an area?

Watershed development helps in the judicious use of water within a particular area. The government has taken up an initiative named watershed management program with the aim to conserve water by plantation, building dams, making canals etc.

It helps to maintain a balance between the need and demand of this natural resource, makes the land fertile and also helps to curb pollution.

Panchayat: A village council or committee consisting of members elected by all the adults of the village. It is responsible for local health, education, dispute resolution etc.

Gram Sabha: It is a general assembly of village people consisting of all adult citizens of the village.

Sarpanch: Head of a Gram Panchayat.

Watershed: It is a method of conservation of water by plantation, making canals etc.