NCERT Solutions for Class 6 Civics Chapter 3 – What is Government?

NCERT Solutions for Class 6 Civics Chapter 3 – What is Government? (Social Science), contains solutions to various questions in Exercise for Chapter 3.  At the end of the Solutions, all the keywords and Notes which are important to understand Chapter 3 – What is Government? Class 6 Civics, have been explained in a simple and easy to understand manner. We are providing NCERT Solutions for Class 6 all subjects which can be accessed by clicking here.

Download NCERT Solutions for Class 6 Civics Chapter 3 – What is Government? 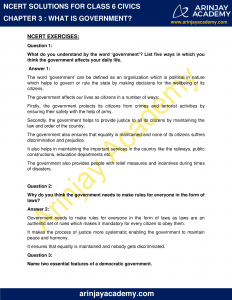 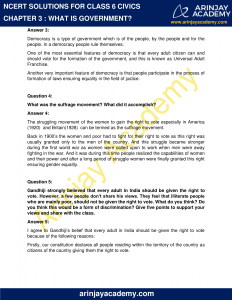 NCERT Solutions for Class 6 Civics Chapter 3-What is Government?– Solutions to Question 5-Definition of Keywords-Government, Democracy, Movement, Laws and Monarchy. 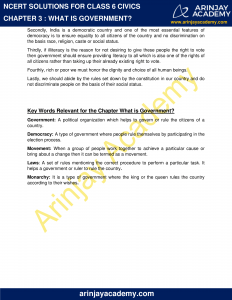 What do you understand by the word ‘government’? List five ways in which you think the government affects your daily life.

The word ‘government’ can be defined as an organization which is political in nature which helps to govern or rule the state by making decisions for the wellbeing of its citizens.

The government affects our lives as citizens in a number of ways:

Firstly, the government protects its citizens from crimes and terrorist activities by ensuring their safety with the help of army.

Secondly, the government helps to provide justice to all its citizens by maintaining the law and order of the country.

The government also ensures that equality is maintained and none of its citizens suffers discrimination and prejudice.

It also helps in maintaining the important services in the country like the railways, public constructions, education departments etc.

The government also provides people with relief measures and incentives during times of disasters.

Why do you think the government needs to make rules for everyone in the form of laws?

Government needs to make rules for everyone in the form of laws as laws are an authentic set of rules which makes it mandatory for every citizen to obey them.

It makes the process of justice more systematic enabling the government to maintain peace and harmony.

It ensures that equality is maintained and nobody gets discriminated.

Democracy is a type of government which is of the people, by the people and for the people. In a democracy people rule themselves.

One of the most essential features of democracy is that every adult citizen can and should vote for the formation of the government, and this is known as Universal Adult Franchise.

Another very important feature of democracy is that people participate in the process of formation of laws ensuring equality in the field of justice.

What was the suffrage movement? What did it accomplish?

The struggling movement of the women to gain the right to vote especially in America
(1920)  and Britain(1928)  can be termed as the suffrage movement.

Back in 1900’s the women and poor had to fight for their right to vote as this right was usually granted only to the men of the country. And this struggle became stronger during the first world war as women were called upon to work when men were away fighting in the war. And it was during this time people realized the capabilities of women and their power and after a long period of struggle women were finally granted this right ensuring gender equality.

I agree to Gandhiji’s belief that every adult in India should be given the right to vote because of the following reasons:

Secondly, India is a democratic country and one of the most essential features of democracy is to ensure equality to all citizens of the country and no discrimination on the basis race, religion, caste or social status.

Thirdly, if illiteracy is the reason for not desiring to give these people the right to vote then government should ensure providing literacy to all which is also one of the rights of all citizens rather than taking up their already existing right to vote.

Fourthly, rich or poor we must honor the dignity and choice of all human beings.

Lastly, we should abide by the rules set down by the constitution in our country and do not discriminate people on the basis of their social status.

Important Terms Relevant for NCERT Solutions for Class 6 Civics Chapter 3-What is Government?:

Government: A political organization which helps to govern or rule the citizens of a country.

Democracy: A type of government where people rule themselves by participating in the election process.

Movement: When a group of people work together to achieve a particular cause or bring about a change then it can be termed as a movement.

Laws: A set of rules mentioning the correct procedure to perform a particular task. It helps a government or ruler to rule the country.

Monarchy: It is a type of government where the king or the queen rules the country according to their wishes.