NCERT Solutions for Class 6 Civics Chapter 4 – Key Elements of a Democratic Government (Social Science), contains solutions to various questions in Exercise for Chapter 4.  At the end of the Solutions, all the keywords and Notes which are important to understand Chapter 4 Key Elements of a Democratic Government Class 6 Civics, have been explained in a simple and easy to understand manner. We are providing NCERT Solutions for Class 6 all subjects which can be accessed by clicking here. 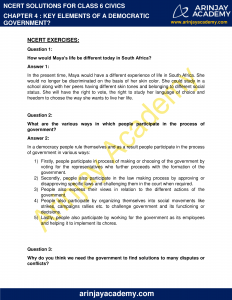 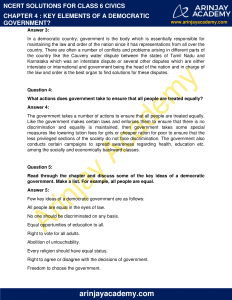 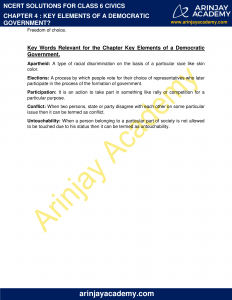 How would Maya’s life be different today in South Africa?

In the present time, Maya would have a different experience of life in South Africa. She would no longer be discriminated on the basis of her skin color. She could study in a school along with her peers having different skin tones and belonging to different social status. She will have the right to vote, the right to study her language of choice and freedom to choose the way she wants to live her life.

What are the various ways in which people participate in the process of government?

In a democracy people rule themselves and as a result people participate in the process of government in various ways:

Why do you think we need the government to find solutions to many disputes or conflicts?

In a democratic country, government is the body which is essentially responsible for maintaining the law and order of the nation since it has representations from all over the country. There are often a number of conflicts and problems arising in different parts of the country like the Cauvery water dispute between the states of Tamil Nadu and Karnataka which was an interstate dispute or several other disputes which are either interstate or international and government being the head of the nation and in charge of the law and order is the best organ to find solutions for these disputes.

What actions does government take to ensure that all people are treated equally?

Read through the chapter and discuss some of the key ideas of a democratic government. Make a list. For example, all people are equal.

Few key ideas of a democratic government are as follows:

Apartheid: A type of racial discrimination on the basis of a particular race like skin color.

Elections: A process by which people vote for their choice of representatives who later participate in the process of the formation of government.

Participation: It is an action to take part in something like rally or competition for a particular purpose.

Conflict: When two persons, state or party disagree with each other on some particular issue then it can be termed as conflict.

Untouchability: When a person belonging to a particular part of society is not allowed to be touched due to his status then it can be termed as untouchability.