You are here: Home / Archives for NCERT Solutions for Class 6 Geography

(a) What are the major landforms?

Answer: The major landforms of the earth are:

(b) What is the difference between a mountain and a plateau?

Answer: The difference between mountain and plateaus are listed in the table below:

(c) What are the different types of mountains?

Answer: There are three different types of mountains:

(d) How are mountains useful to man?

Answer: Mountains are useful to man in many ways:

(e) How are plains formed?

Answer: Plains are level land formed mostly due to the deposition of silt and clay carried down by the rivers.

(f) Why are the river plains thickly populated?

Answer: Plains are the most thickly populated area of the world as it is the most fertile area, agriculture is the main occupation of people in the plains. The climate in the plains is also pleasant.

(g) Why are mountains thinly populated?

Answer: The mountains are thinly populated because:

i. In the mountainous regions the climate is too cold for people to stay.
ii. The rugged terrain of the mountain is unsuitable for living.

1. A plain is an unbroken flat or a low-level land.
2. The Himalayas and the Alps are examples of Young fold mountains types of mountains.
3. Plateau areas are rich in mineral deposits.
4. The range is a line of mountains.
5. The plain areas are most productive for farming. 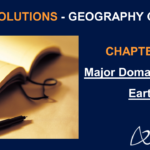 (a) What are the four major domains of the earth?

Answer: The major domains of the earth, are lithosphere, atmosphere, hydrosphere and biosphere. The first three domains function together to form the biosphere, which sustains life on earth.

(b) Name the major continents of the earth.

(c) Name the two continents that lie entirely in the Southern Hemisphere.

Answer: Antarctica and Australia lie entirely in the Southern Hemisphere.

Answer: The atmosphere can be divided into layers based on its temperature and distance from the surface. These layers are the troposphere, the stratosphere, the mesosphere and the thermosphere.

(e) Why is the earth called the ‘blue planet’?

(f) Why is the Northern Hemisphere called the Land Hemisphere?

Answer: The Northern Hemisphere is called the Land Hemisphere because most of the landmasses in terms of continent are found there while there is an abundance of water masses in the southern hemisphere.

(g) Why is the Biosphere important for living organisms?

Answer: The biosphere, is the layer within the planet Earth where life exists. This layer ranges from heights of up to ten kilometres above sea level, to depths of the ocean. The ranges are determined according to the zones which helps life to sustain, has water and oxygen. This biosphere is an integral part of all the domains as it is the only sphere sustaining life.

(e) Which is the largest continent?
(i) Africa
(ii) Asia
(iii) Australia

(a) The deepest point on the earth is Mariana Trench in the Pacific Ocean.
(b) The Indian Ocean is named after a country.
(c) The Biosphere is a narrow contact zone of land, water and air that supports life.
(d) The continents of Europe and Asia together are known as Eurasia.
(e) The highest mountain peak on the earth is Mt. Everest. 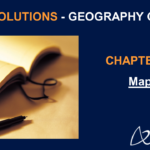 (a) What are the three components of a map?

Answer: The three main components of a map are:

1) distance, which can be calculated by estimating the scale of the map. The distance of a map which is represented by a scale helps us understand how big or small the area is.

2) Compass Direction: A map contains latitudes and longitudes, which are imaginary lines to locate any point on the earth. Some maps may only contain a North arrow to show the Direction of North.

3) Symbols (or Key): Many maps are represented either by colours or symbols because it may look extremely clustered to put in all details on the map itself. Therefore, in the bottom left or right corner, there are legends to

(b) What are the four cardinal directions?

Answer: Scale of a map depicts how large or small an area is represented by the map. Maps may show and illustrate as big a feature as the world or it may depict a small area such as a city. Accordingly, the scales of a map is either a large scale map or a small scale map.

(d) How are maps more helpful than a globe?

Answer: Maps are more helpful than globe as the maps are usually made on paper and thus easy to carry, moreover the scale of a map can be easily changed according to the requirement. Maps are also cost effective than globes.

(e) Distinguish between a map and a plan.

Answer: A Map is a roughly drawn idea or diagram that shows only basic details which are important such as the boundary or the distance between two places. It does not have any definite scale and is not extremely accurate.

A plan on the other hand is an accurate form of a map with definite graticules or a north arrow. The scale on the plan map is accurate which shows a small area on a large scale. Planned maps are extremely helpful for navigation purposes.

Answer: A large scale map provides detailed information as they show a small surface on the earth such as a city region or a mouza according to the landuse. It shows how many houses, shops, hospitals, schools, roads are there. This they provide with vivid information.

(g) How do symbols help in reading maps?

Answer: Many maps are represented either by colours or symbols because it may look extremely clustered to put in all details on the map itself. Therefore, in the bottom left or right corner, there are legends to explain what a particular colour or symbol means. For example, Yellow depicts desert area, Green depicts plain land, Brown depicts hilly region. 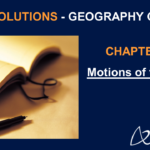 (a) What is the angle of inclination of the earth’s axis with its orbital plane?

Answer: The earth rotates around its axis at an angle of 23.5 degrees relative to its orbital plane.

(b) Define rotation and revolution.

Answer: The terms rotation and revolution refer to the various movements of the earth around its own axis as well as on its orbit around the sun.

Rotation refers to the spinning of any object around its own axis. The Earth takes 24 hours to complete one rotation on its axis.

Answer: A leap year is a year which has 366 days instead of 365. This phenomenon occurs every four years and the extra day is added in the month of February when it has 29 days instead of 28.

(d) Differentiate between the Summer and Winter Solstice.

Answer: The day of a solstice in either hemisphere has either the maximum amount of sunlight of the year (summer solstice) and marks the beginning of Summer or Winter. The Summer Solstice in Northern Hemisphere is also referred to as the June Solstice because it occurs on 21st  or 22nd June.  The least sunlight of the year (winter solstice) occurs during December 21st or 22nd.

The Summer Solstice in the Southern Hemisphere, on the other hand, occurs on December 21st or 22nd and people experience the longest day below the Equator. The Winter Solstice is also reversed and occurs on either the 21st or 22nd of June when the day is shortest.

Answer: When there is equal length of daylight and darkness within a day, it is called an equinox. Equinoxes occur twice each year: around 20 March and 23 September. In other words, it is the time of the year when the Sun is directly above the Equator.

(g) Why do the poles experience about six months day and six months night?

(a) A leap year has 366 number of days.
(b) The daily motion of the earth is Rotation.
(c) The earth travels around the sun in an elliptical orbit.
(d) The sun’s rays fall vertically on the Tropic of Cancer on 21st June.
(e) Days are shorter during Winter season. 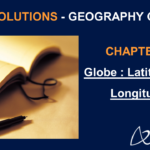 (a) What is the true shape of the earth?

Answer: A globe a 3-Dimensional model of the earth in a miniature form. Since it becomes difficult to understand the shape, size and location of different continents on the earth, the globe presents an easy solution to it. A globe also has latitudes and longitudes marked on it for easy identification.

(c) What is the latitudinal value of the Tropic of Cancer?

Answer: The latitudinal value of tropic of cancer is 23.5° N.

(d) What are the three heat zones of the Earth?

(e) What are parallels of latitude and meridians of longitude?

Answer: The imaginary lines drawn horizontally from left to right specifies the North-South position of a point on the Earth surface and are known as the Parallels of latitude. Similarly, imaginary lines drawn vertically (up and down) that meet at the North and South Poles are known as meridians or longitudes. Latitudes ranges from 0°-90° in both the hemispheres. The meridians or longitudes are semi circles which converge on both the poles and are measured east or west of the prime meridian

(f) Why does the torrid zone receive maximum amount of heat?

Answer: The torrid zone ranges between the tropic of Cancer and the tropic of Capricorn (23.5° N and S). As the earth revolves around the sun in its tilted axis, the sun’s rays fall vertically over these two important lines of latitude during the two solstices. Thus, receive the maximum amount of heat.

(a) The Tropic of Capricorn is located at 23.5 degrees south.
(b) The Standard Meridian of India is 82½° E.
(c) The 0° Meridian is also known as the prime meridian.
(d) The distance between the longitudes decreases towards poles.
(e) The Arctic Circle is located in the Northern hemisphere. 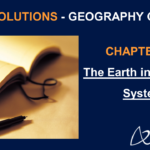 (a) How does a planet differ from a star?

Answer: A planet and a star are two different celestial bodies, the difference is listed in the table below:

(b) What is meant by the ‘Solar System’?

Answer: The Solar System consists of a yellow star; the Sun, the eight planets, their satellites or moons revolving around them, and the asteroids within the Milky Way Galaxy. The gravitational force of the Sun binds all the celestial bodies which revolve around it.

(c) Name all the planets according to their distance from the sun.

Answer: The eight planets according to the distance from the sun are Mercury, Venus, Earth, Mars, Jupiter, Saturn, Uranus and Neptune.

(d) Why is the Earth called a unique planet?

Answer: The earth is called the “unique” planet because it can support life. It has an atmosphere of its own with the right amount of oxygen necessary for respiration and carbon dioxide. Earth is also the only planet in the solar system which contains water, the elixir of life.

(e) Why do we see only one side of the moon always?

(f) What is the Universe?

Answer:The Universe is a huge body containing millions of galaxies stars and planets. It consists of matter, space and time and is extremely huge. Scientists and astronomers yet do not know the extent of the universe, but it said that the Universe is expanding.

(b) Which is the third nearest planet to the sun ?
(i) Venus
(ii) Earth
(iii) Mercury

(a) A group of stars forming various patterns is called a constellation.
(b) A huge system of stars is called galaxy.
(c) The Moon is the closest celestial body to our earth.
(d) The Earth is the third nearest planet to the sun.
(e) Planets do not have their own heat and light.