NCERT Solutions for Class 9 History Chapter 5 Pastoralists in the Modern World (Social Science), contains solutions to various questions in Exercise for Chapter 5. At the end of the Solutions, all the keywords which are important to understand Pastoralists in the Modern World Class 9 History, have been explained in a simple and easy to understand manner. We are providing NCERT Solutions for Class 9 all subjects which can be accessed by clicking here. 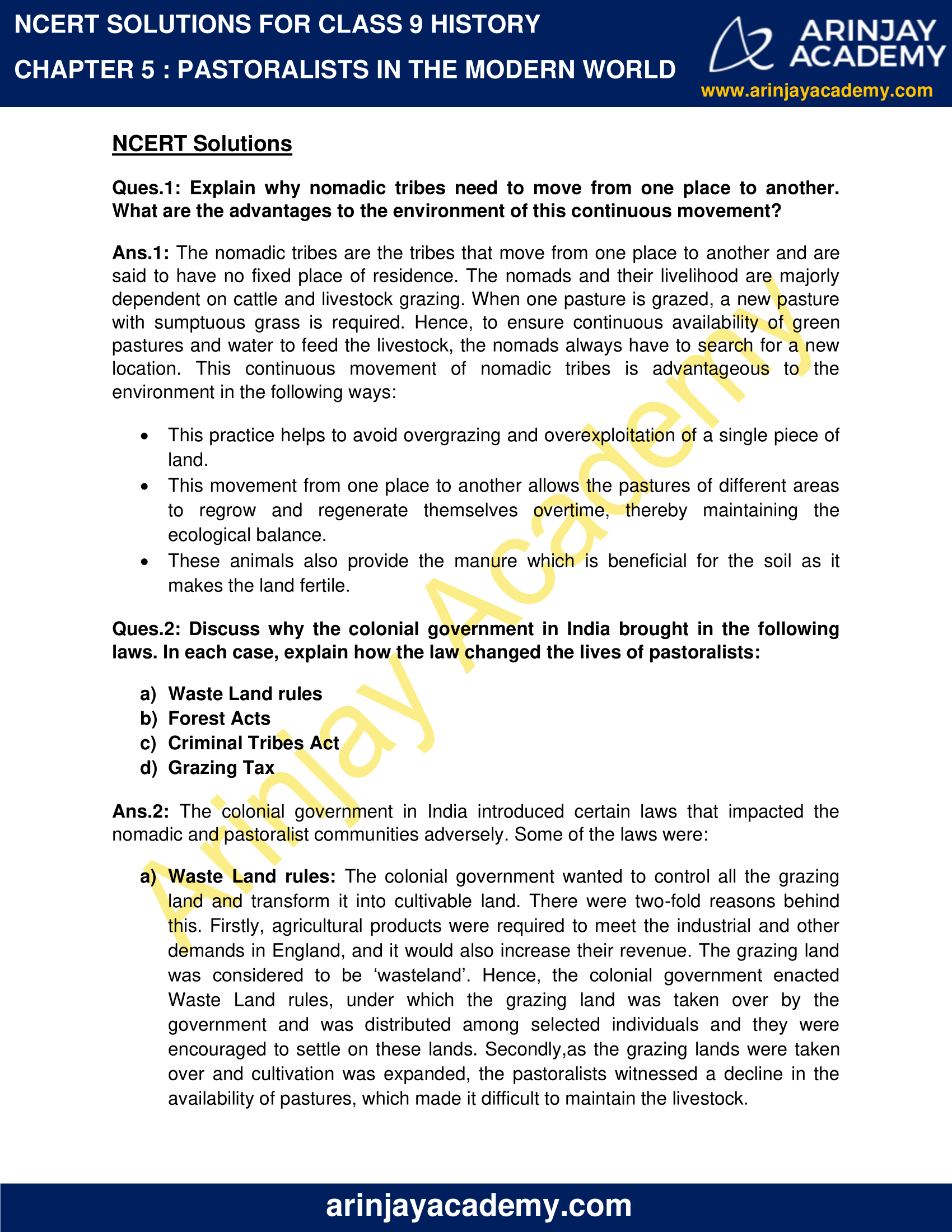 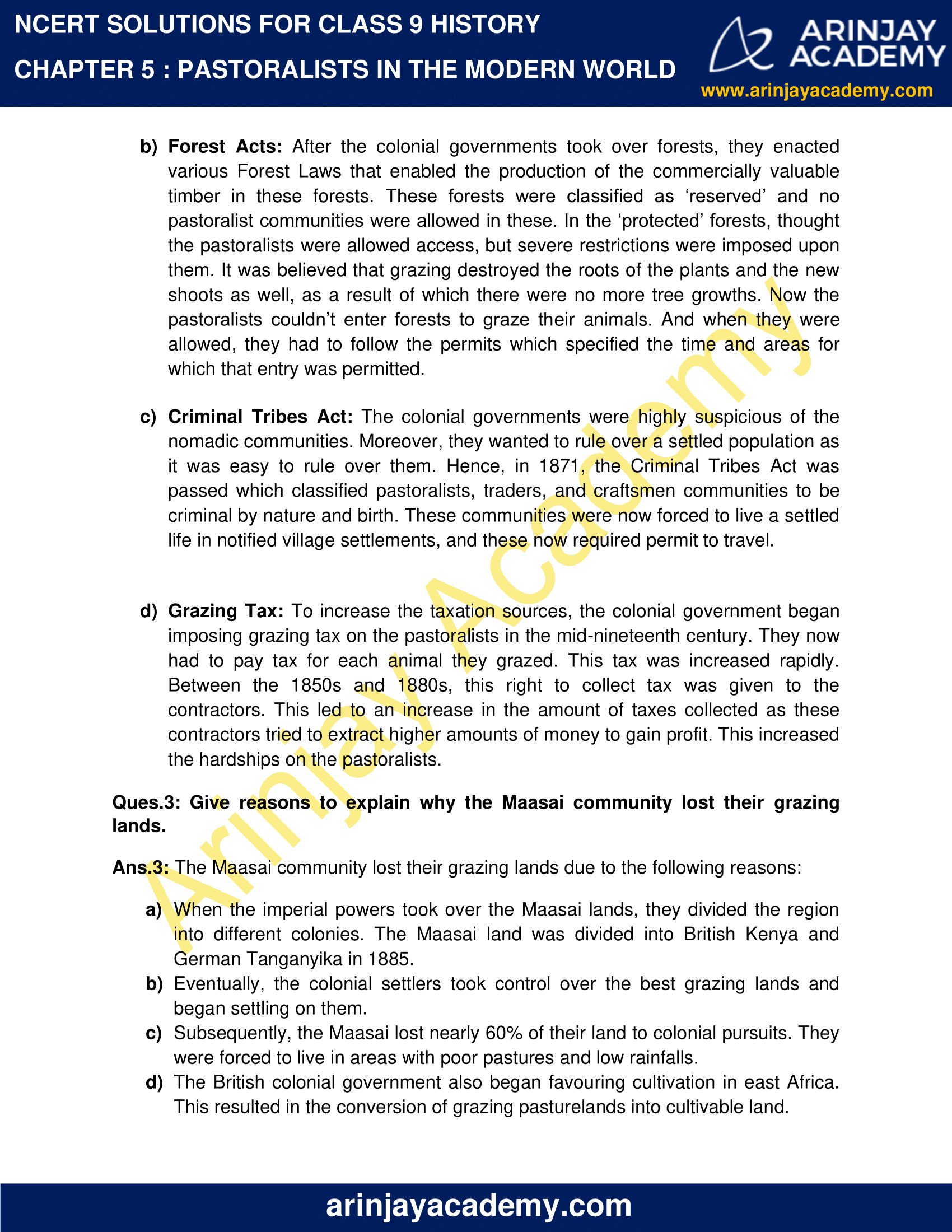 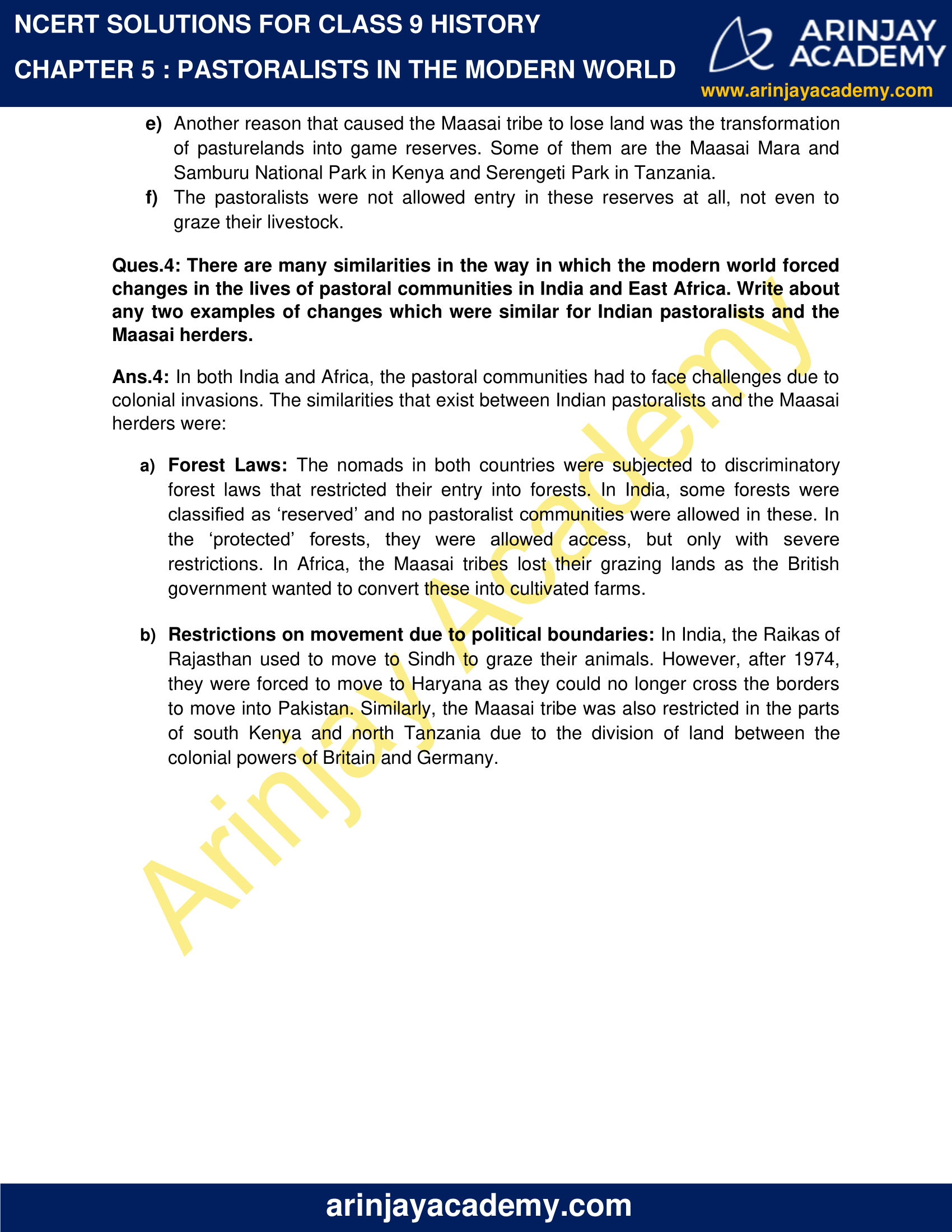 Ques.1: Explain why nomadic tribes need to move from one place to another. What are the advantages to the environment of this continuous movement?

Ans.1: The nomadic tribes are the tribes that move from one place to another and are said to have no fixed place of residence. The nomads and their livelihood are majorly dependent on cattle and livestock grazing. When one pasture is grazed, a new pasture with sumptuous grass is required. Hence, to ensure continuous availability of green pastures and water to feed the livestock, the nomads always have to search for a new location. This continuous movement of nomadic tribes is advantageous to the environment in the following ways:

Ques.2: Discuss why the colonial government in India brought in the following laws. In each case, explain how the law changed the lives of pastoralists:

Ans.2: The colonial government in India introduced certain laws that impacted the nomadic and pastoralist communities adversely. Some of the laws were:

a) Waste Land rules: The colonial government wanted to control all the grazing land and transform it into cultivable land. There were two-fold reasons behind this. Firstly, agricultural products were required to meet the industrial and other demands in England, and it would also increase their revenue. The grazing land was considered to be ‘wasteland’. Hence, the colonial government enacted Waste Land rules, under which the grazing land was taken over by the government and was distributed among selected individuals and they were encouraged to settle on these lands. Secondly,as the grazing lands were taken over and cultivation was expanded, the pastoralists witnessed a decline in the availability of pastures, which made it difficult to maintain the livestock.

b) Forest Acts: After the colonial governments took over forests, they enacted various Forest Laws that enabled the production of the commercially valuable timber in these forests. These forests were classified as ‘reserved’ and no pastoralist communities were allowed in these. In the ‘protected’ forests, thought the pastoralists were allowed access, but severe restrictions were imposed upon them. It was believed that grazing destroyed the roots of the plants and the new shoots as well, as a result of which there were no more tree growths. Now the pastoralists couldn’t enter forests to graze their animals. And when they were allowed, they had to follow the permits which specified the time and areas for which that entry was permitted.

c)  Criminal Tribes Act: The colonial governments were highly suspicious of the nomadic communities. Moreover, they wanted to rule over a settled population as it was easy to rule over them. Hence, in 1871, the Criminal Tribes Act was passed which classified pastoralists, traders, and craftsmen communities to be criminal by nature and birth. These communities were now forced to live a settled life in notified village settlements, and these now required permit to travel.

d) Grazing Tax: To increase the taxation sources, the colonial government began imposing grazing tax on the pastoralists in the mid-nineteenth century. They now had to pay tax for each animal they grazed. This tax was increased rapidly. Between the 1850s and 1880s, this right to collect tax was given to the contractors. This led to an increase in the amount of taxes collected as these contractors tried to extract higher amounts of money to gain profit. This increased the hardships on the pastoralists.

Ques.3: Give reasons to explain why the Maasai community lost their grazing lands.

Ans.3: The Maasai community lost their grazing lands due to the following reasons:

a) When the imperial powers took over the Maasai lands, they divided the region into different colonies. The Maasai land was divided into British Kenya and German Tanganyika in 1885.
b) Eventually, the colonial settlers took control over the best grazing lands and began settling on them.
c) Subsequently, the Maasai lost nearly 60% of their land to colonial pursuits. They were forced to live in areas with poor pastures and low rainfalls.
d) The British colonial government also began favouring cultivation in east Africa. This resulted in the conversion of grazing pasturelands into cultivable land.
e) Another reason that caused the Maasai tribe to lose land was the transformation of pasturelands into game reserves. Some of them are the Maasai Mara and Samburu National Park in Kenya and Serengeti Park in Tanzania.
f) The pastoralists were not allowed entry in these reserves at all, not even to graze their livestock.

Ques.4: There are many similarities in the way in which the modern world forced changes in the lives of pastoral communities in India and East Africa. Write about any two examples of changes which were similar for Indian pastoralists and the Maasai herders.

Ans.4: In both India and Africa, the pastoral communities had to face challenges due to colonial invasions. The similarities that exist between Indian pastoralists and the Maasai herders were:

a) Forest Laws: The nomads in both countries were subjected to discriminatory forest laws that restricted their entry into forests. In India, some forests were classified as ‘reserved’ and no pastoralist communities were allowed in these. In the ‘protected’ forests, they were allowed access, but only with severe restrictions. In Africa, the Maasai tribes lost their grazing lands as the British government wanted to convert these into cultivated farms.

b) Restrictions on movement due to political boundaries: In India, the Raikas of Rajasthan used to move to Sindh to graze their animals. However, after 1974, they were forced to move to Haryana as they could no longer cross the borders to move into Pakistan. Similarly, the Maasai tribe was also restricted in the parts of south Kenya and north Tanzania due to the division of land between the colonial powers of Britain and Germany

1. Pastoral Nomads and their Movements

1.2 On the Plateaus, Plains and Deserts

2.1 How Did these Changes Affect the Lives of Pastoralists?

2.2 How Did the Pastoralists Cope with these Changes?

3.1 Where have the Grazing Lands Gone?

3.2 The Borders are Closed

Bugyal: The meadows in mountain regions are known as Bugyal.

Kharif: The Kharif refers to the autumn cropping season. The crops are harvested in September-October.

Rabi: The rabi refers to the spring cropping season. The crops are harvested around the month of March.

Stubble: After the harvest, lower ends of grain stocks are left behind. These are called as stubble.

Customary rights: These are the rights that are given to the members of a community by traditional and customary methods.