NCERT Solutions for Class 9 History Chapter 1 – The French Revolution (Social Science), contains solutions to various questions in Exercise for Chapter 1.  At the end of the Solutions, all the keywords which are important to understand the French Revolution Class 9 History, have been explained in a simple and easy to understand manner. We are providing NCERT Solutions for Class 9 all subjects which can be accessed by clicking here. 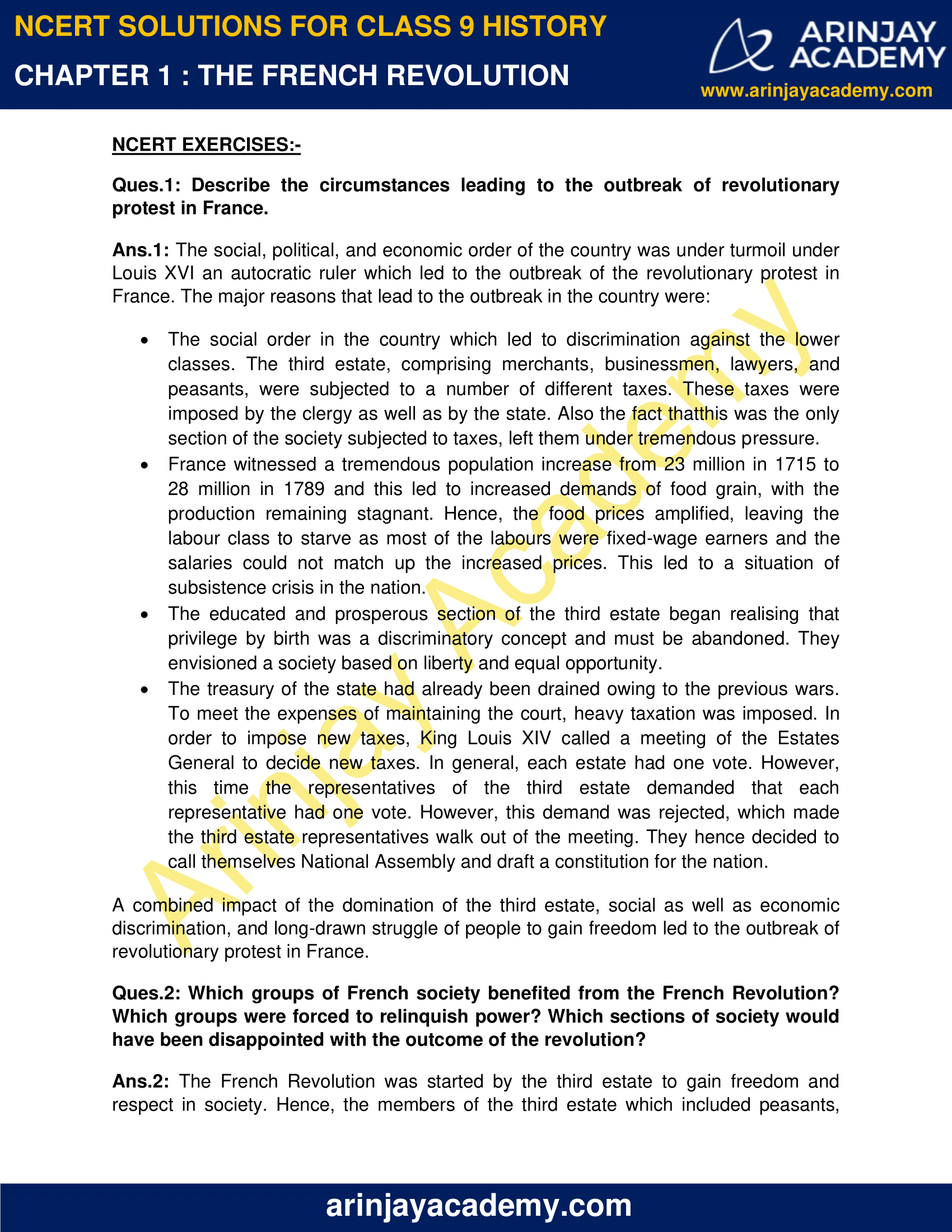 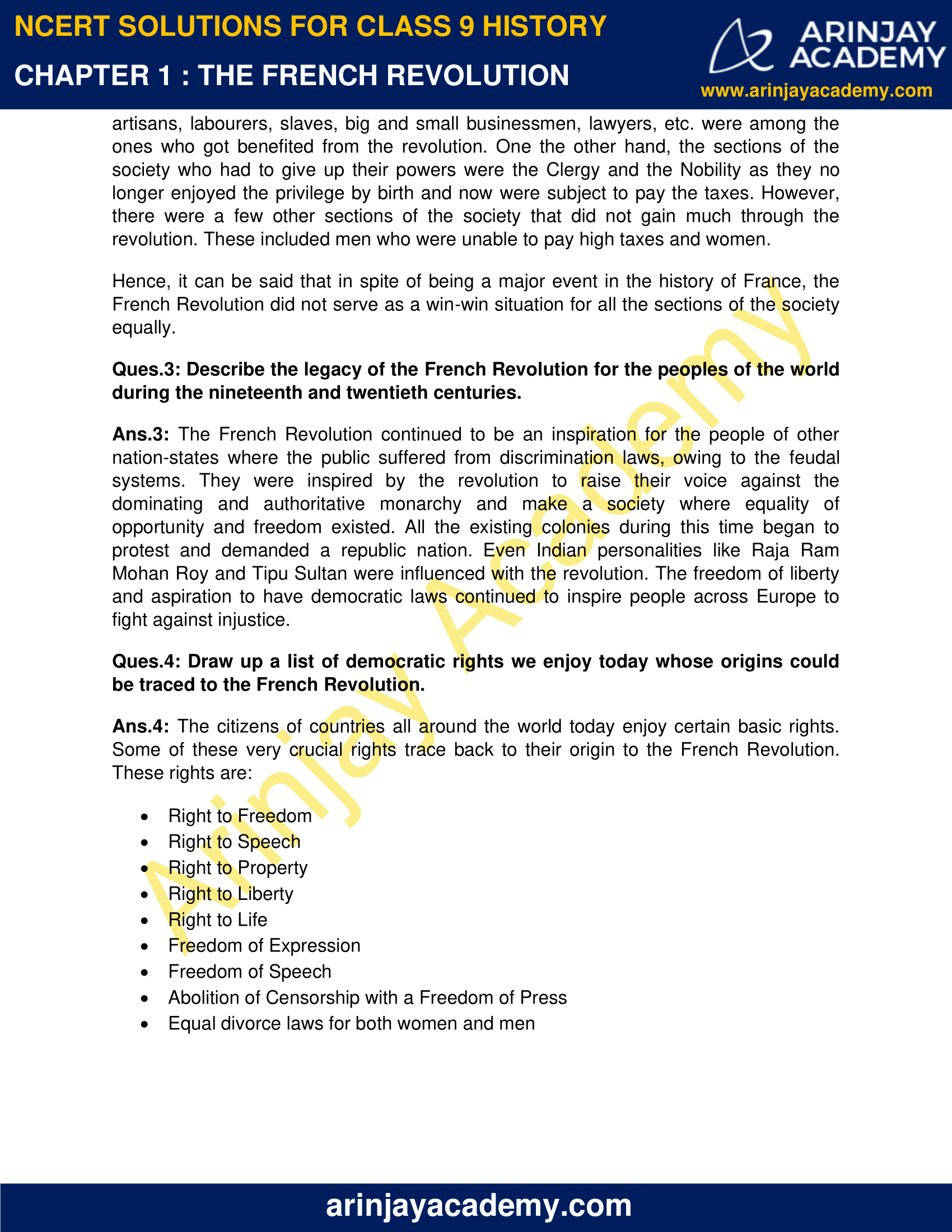 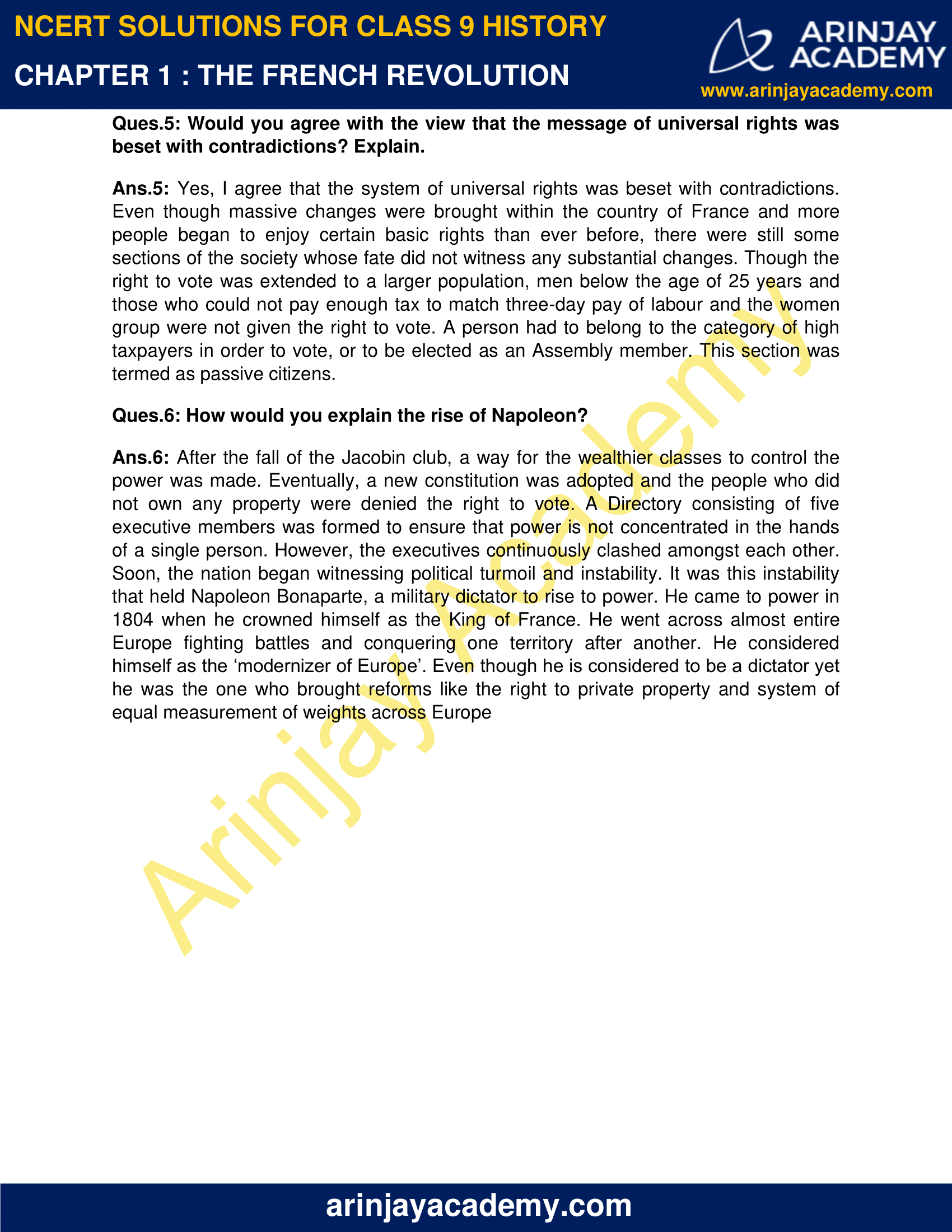 Ques.1: Describe the circumstances leading to the outbreak of revolutionary protest in France.

A combined impact of the domination of the third estate, social as well as economic discrimination, and long-drawn struggle of people to gain freedom led to the outbreak of revolutionary protest in France.

Ques.2: Which groups of French society benefited from the French Revolution? Which groups were forced to relinquish power? Which sections of society would have been disappointed with the outcome of the revolution?

Ans.2: The French Revolution was started by the third estate to gain freedom and respect in society. Hence, the members of the third estate which included peasants, artisans, labourers, slaves, big and small businessmen, lawyers, etc. were among the ones who got benefited from the revolution.One the other hand,the sections of the society who had to give up their powers were the Clergy and the Nobility as they no longer enjoyed the privilege by birth and now were  subject to pay the taxes. However, there were a few other sections of the society that did not gain much through the revolution. These included men who were unable to pay high taxes and women.

Hence, it can be said that in spite of being a major event in the history of France, the French Revolution did not serve as a win-win situation for all the sections of the society equally.

Ques.3: Describe the legacy of the French Revolution for the peoples of the world during the nineteenth and twentieth centuries.

Ans.3: The French Revolution continued to be an inspiration for the people of other nation-states where the public suffered from discrimination laws, owing to the feudal systems. They were inspired by the revolution to raise their voice against the dominating and authoritative monarchy and make a society where equality of opportunity and freedom existed. All the existing colonies during this time began to protest and demanded a republic nation. Even Indian personalities like Raja Ram Mohan Roy and Tipu Sultan were influenced with the revolution. The freedom of liberty and aspiration to have democratic laws continued to inspire people across Europe to fight against injustice.

Ques.4: Draw up a list of democratic rights we enjoy today whose origins could be traced to the French Revolution.

Ans.4: The citizens of countries all around the world today enjoy certain basic rights. Some of these very crucial rights trace back to their origin to the French Revolution. These rights are:

Ques.5: Would you agree with the view that the message of universal rights was beset with contradictions? Explain.

Ans.5: Yes, I agree that the system of universal rights was beset with contradictions. Even though massive changes were brought within the country of France and more people began to enjoy certain basic rights than ever before, there were still some sections of the society whose fate did not witness any substantial changes. Though the right to vote was extended to a larger population, men below the age of 25 years and those who could not pay enough tax to match three-day pay of labour and the women group were not given the right to vote. A person had to belong to the category of high taxpayers in order to vote, or to be elected as an Assembly member. This section was termed as passive citizens.

Ques.6: How would you explain the rise of Napoleon?

Ans.6: After the fall of the Jacobin club,a way for the wealthier classes to control the power was made. Eventually, a new constitution was adopted and the people who did not own any property were denied the right to vote. A Directory consisting of five executive members was formed to ensure that power is not concentrated in the hands of a single person. However, the executives continuously clashed amongst each other. Soon, the nation began witnessing political turmoil and instability. It was this instability that held Napoleon Bonaparte, a military dictator to rise to power. He came to power in 1804 when he crowned himself as the King of France. He went across almost entire Europe fighting battles and conquering one territory after another. He considered himself as the ‘modernizer of Europe’. Even though he is considered to be a dictator yet he was the one who brought reforms like the right to private property and system of equal measurement of weights across Europe

1.1 The struggle to survive

1.2 How a subsistence crisis happens

1.3 A growing middle class envisages an end to privileges

2. The Outbreak of the Revolution

4. Did Women have a Revolution?

4.1 The Abolition of Slavery

4.2 The Revolution and Everyday Life

Livre: Currency of France. It was obsoleted in the year 1794.

Clergy: It was the first estate of French society. It comprised of all the people connected to the church and who were bestowed with its responsibilities.

Tithe: It was a type of tax that was paid to the Clergy by the peasants of the third estate. It was corresponding to one-tenth of the agricultural produce.

Taille: It was the tax which was paid by the third estate directly to the state.

Old Regime: It refers to the society and institutions of France before 1789.

Subsistence Crisis: Crisis faced by the citizens of France due to an excessive shortage of food, leading to a struggle for survival. The basic means of subsistence i.e. food, was no longer affordable during the crisis.

Chateau:It was a term predominantly used for the royal residence of the King, or for a nobleman.

Manor: Refers to the residence and land belonging to a lord.

Treason: An act of betraying one’s own country.

Negroes: A term used to describe the native African community living in the south of the Sahara.

Emancipation: The process of liberating someone from different types of restrictions be it social, political or legal.