NCERT Solutions for Class 9 History Chapter 3 – Nazism and the Rise of Hitler (Social Science), contains solutions to various questions in Exercise for Chapter 3.  At the end of the Solutions, all the keywords which are important to understand Nazism and the Rise of Hitler Class 9 History, have been explained in a simple and easy to understand manner. We are providing NCERT Solutions for Class 9 all subjects which can be accessed by clicking here. 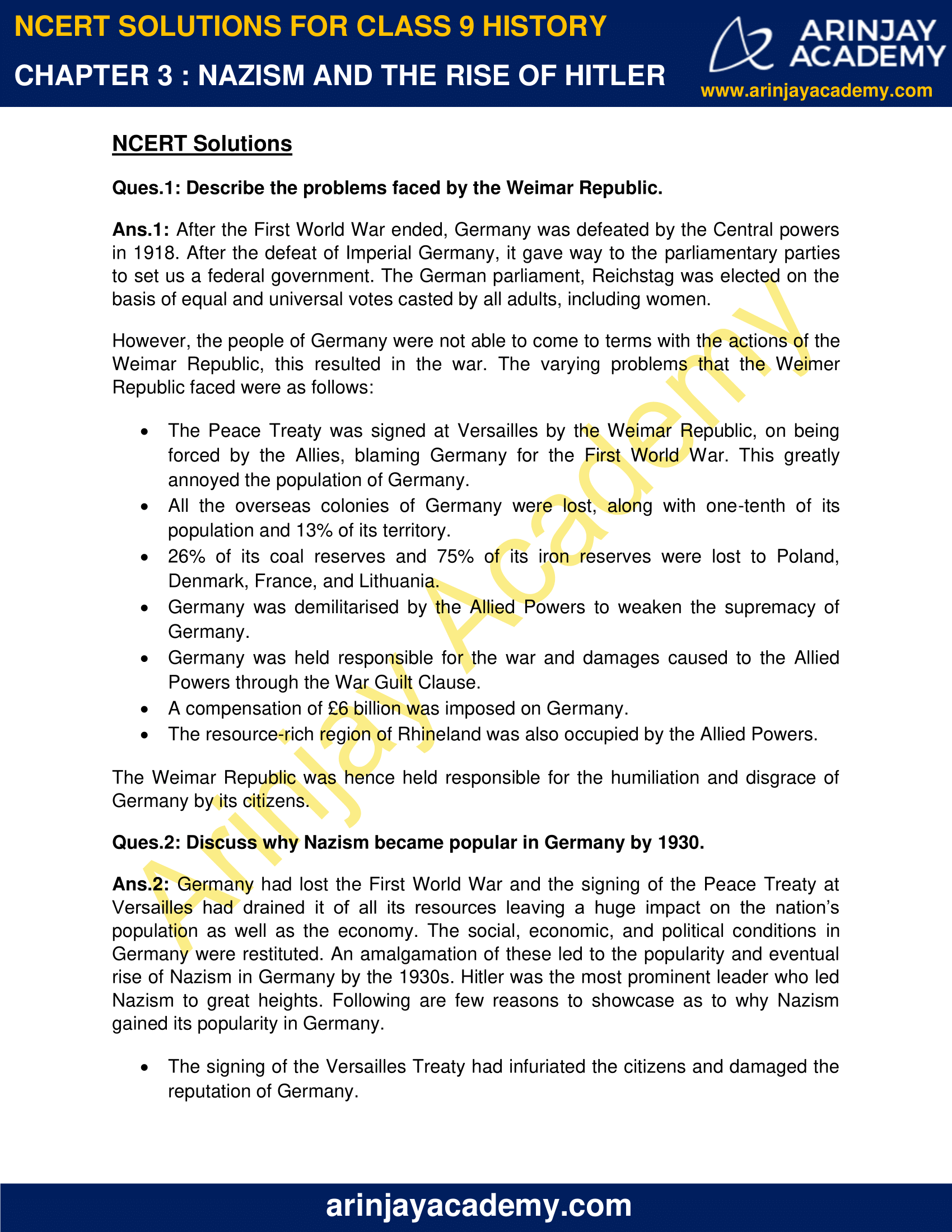 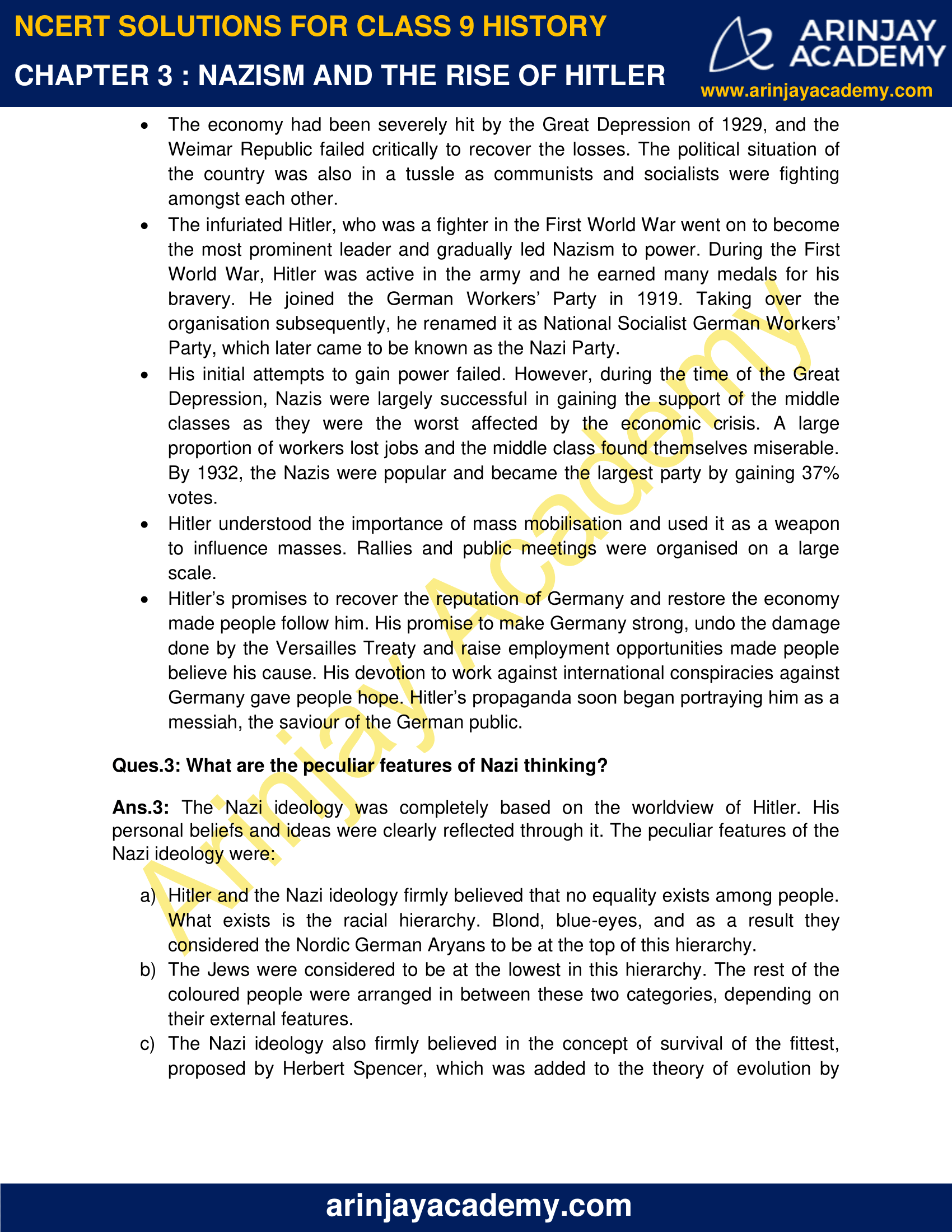 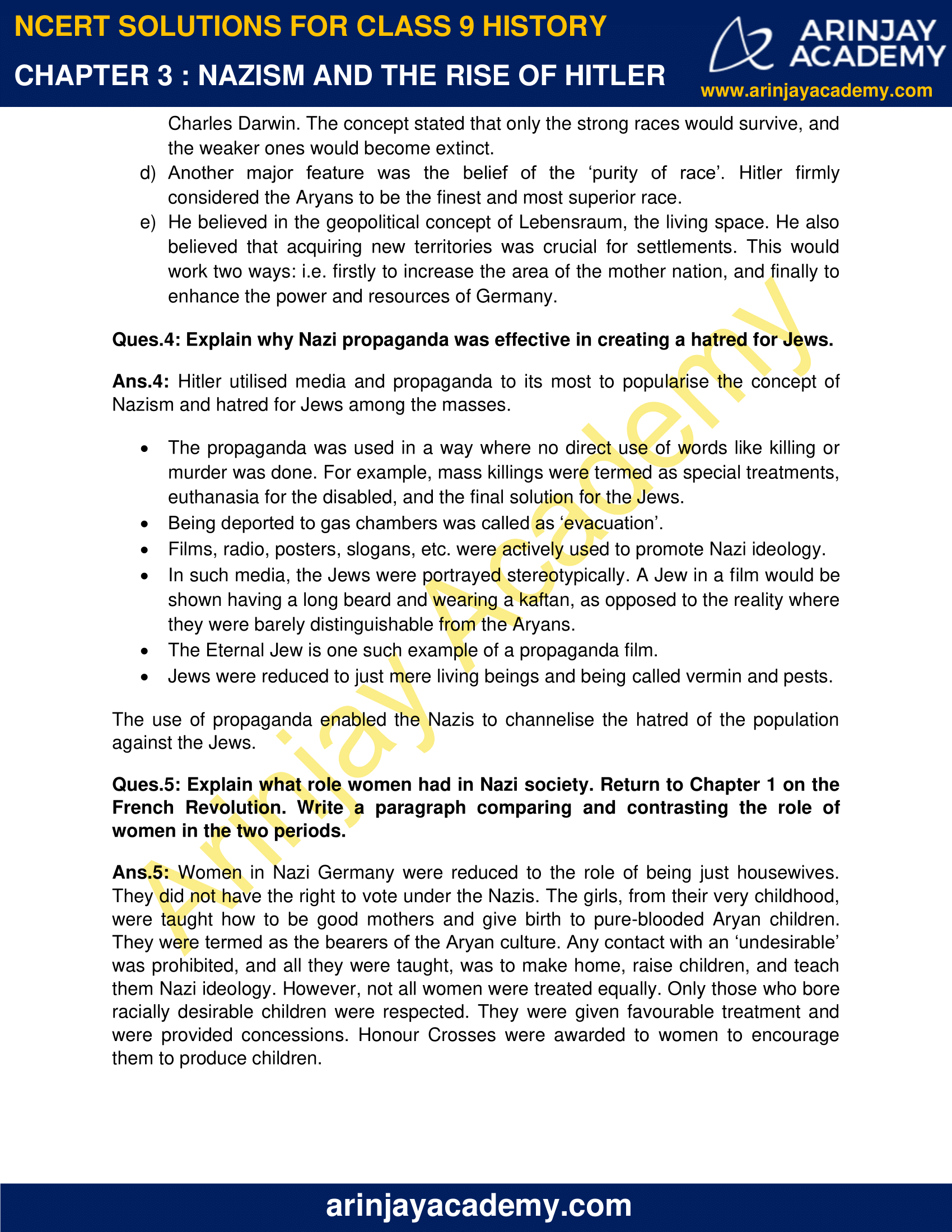 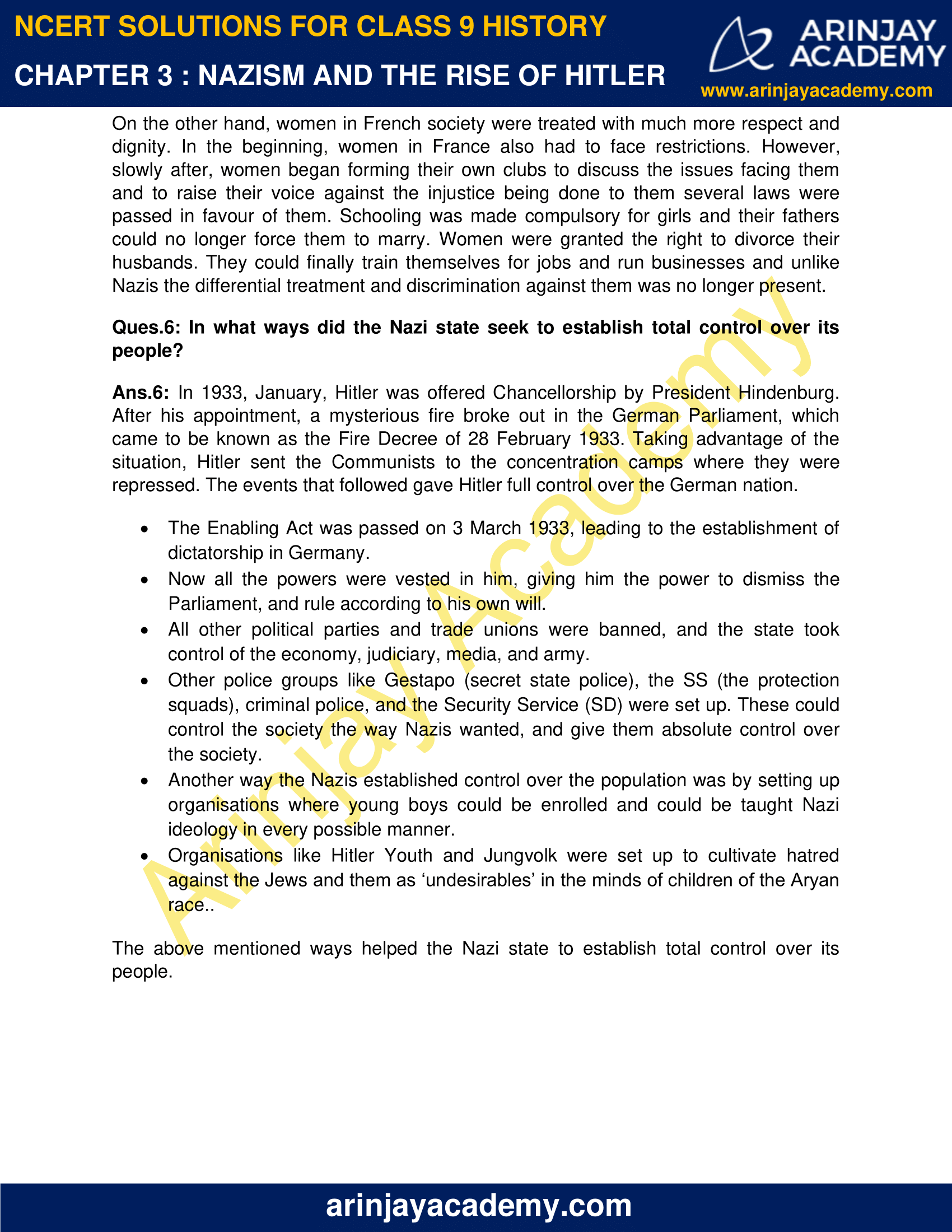 Ques.1: Describe the problems faced by the Weimar Republic.

Ans.1: After the First World War ended, Germany was defeated by the Central powers in 1918. After the defeat of Imperial Germany, it gave way to the parliamentary parties to set us a federal government. The German parliament, Reichstag was elected on the basis of equal and universal votes casted by all adults, including women.

However, the people of Germany were not able to come to terms with the actions of the Weimar Republic, this resulted in the war. The varying problems that the Weimer Republic faced were as follows:

The Weimar Republic was hence held responsible for the humiliation and disgrace of Germany by its citizens.

Ques.2: Discuss why Nazism became popular in Germany by 1930.

Ans.2: Germany had lost the First World War and the signing of the Peace Treaty at Versailles had drained it of all its resources leaving a huge impact on the nation’s population as well as the economy. The social, economic, and political conditions in Germany were restituted. An amalgamation of these led to the popularity and eventual rise of Nazism in Germany by the 1930s. Hitler was the most prominent leader who led Nazism to great heights. Following are few reasons to showcase as to why Nazism gained its popularity in Germany.

Ques.3: What are the peculiar features of Nazi thinking?

a) Hitler and the Nazi ideology firmly believed that no equality exists among people. What exists is the racial hierarchy. Blond, blue-eyes, and as a result they considered the Nordic German Aryans to be at the top of this hierarchy.

b) The Jews were considered to be at the lowest in this hierarchy. The rest of the coloured people were arranged in between these two categories, depending on their external features.

c) The Nazi ideology also firmly believed in the concept of survival of the fittest, proposed by Herbert Spencer, which was added to the theory of evolution by Charles Darwin. The concept stated that only the strong races would survive, and the weaker ones would become extinct.

d) Another major feature was the belief of the ‘purity of race’. Hitler firmly considered the Aryans to be the finest and most superior race.

e) He believed in the geopolitical concept of Lebensraum, the living space. He also believed that acquiring new territories was crucial for settlements. This would work two ways: i.e. firstly to increase the area of the mother nation, and finally to enhance the power and resources of Germany.

Ques.4: Explain why Nazi propaganda was effective in creating a hatred for Jews.

Ans.4: Hitler utilised media and propaganda to its most to popularise the concept of Nazism and hatred for Jews among the masses.

The use of propaganda enabled the Nazis to channelise the hatred of the population against the Jews.

Ques.5: Explain what role women had in Nazi society. Return to Chapter 1 on the French Revolution. Write a paragraph comparing and contrasting the role of women in the two periods.

Ans.5: Women in Nazi Germany were reduced to the role of being just housewives. They did not have the right to vote under the Nazis. The girls, from their very childhood, were taught how to be good mothers and give birth to pure-blooded Aryan children. They were termed as the bearers of the Aryan culture. Any contact with an ‘undesirable’ was prohibited, and all they were taught, was to make home, raise children, and teach them Nazi ideology. However, not all women were treated equally. Only those who bore racially desirable children were respected. They were given favourable treatment and were provided concessions. Honour Crosses were awarded to women to encourage them to produce children.

On the other hand, women in French society were treated with much more respect and dignity. In the beginning, women in France also had to face restrictions. However, slowly after, women began forming their own clubs to discuss the issues facing them and to raise their voice against the injustice being done to them several laws were passed in favour of them. Schooling was made compulsory for girls and their fathers could no longer force them to marry. Women were granted the right to divorce their husbands. They could finally train themselves for jobs and run businesses and unlike Nazis the differential treatment and discrimination against them was no longer present.

Ques.6: In what ways did the Nazi state seek to establish total control over its people?

Ans.6: In 1933, January, Hitler was offered Chancellorship by President Hindenburg. After his appointment, a mysterious fire broke out in the German Parliament, which came to be known as the Fire Decree of 28 February 1933. Taking advantage of the situation, Hitler sent the Communists to the concentration camps where they were repressed. The events that followed gave Hitler full control over the German nation.

The above mentioned ways helped the Nazi state to establish total control over its people.

1. Birth of the Weimar Republic

1.3 The Years of Depression

2.1 The Destruction of Democracy

3.1 Establishment of the Racial State

4.1 The Nazi Cult of Motherhood

4.2 The Art of Propaganda

5. Ordinary People and the Crimes Against Humanity

5.1 Knowledge about the Holocaust

Important Terms Relevant for NCERT Solutions for Class 9 History Chapter 3 – Nazism and the Rise of Hitler :

Allies: Generally referred to other countries or parties who were part of the same thing. Here in this chapter it refers to the parties in the World War. Initially, led by the UK and France , and later joined by the UK and USSR.

Reparation: To make up for something that is wrongly done.

Proletarianisation: Level of being impoverished matching to that of the working class.

Propaganda: A way of appealing to the masses by using persuasive techniques in media, like posters, movies, etc.

Concentration camp: A camp set up by Nazis where the prisoners were isolated and detained, without any laws.

Nordic German Aryans: A branch of Aryans that lived in north European countries, with German or related origin.

Gypsy: They had their own community identity. Most of them traced their origin to India.

Pauperised: to be reduced to absolute poverty.

Persecution: Punishment to the people of a religion or community. It is generally systematic.

Usurers: These were the moneylenders who charged excessive interest.

Jungvolk: All the children below 14 years of age were admitted to these Nazi Youths Groups.