NCERT Solutions for Class 9 History Chapter 4 – Forest Society and Colonialism (Social Science), contains solutions to various questions in Exercise for Chapter 4.  At the end of the Solutions, all the keywords which are important to understand Forest Society and Colonialism Class 9 History, have been explained in a simple and easy to understand manner. We are providing NCERT Solutions for Class 9 all subjects which can be accessed by clicking here. 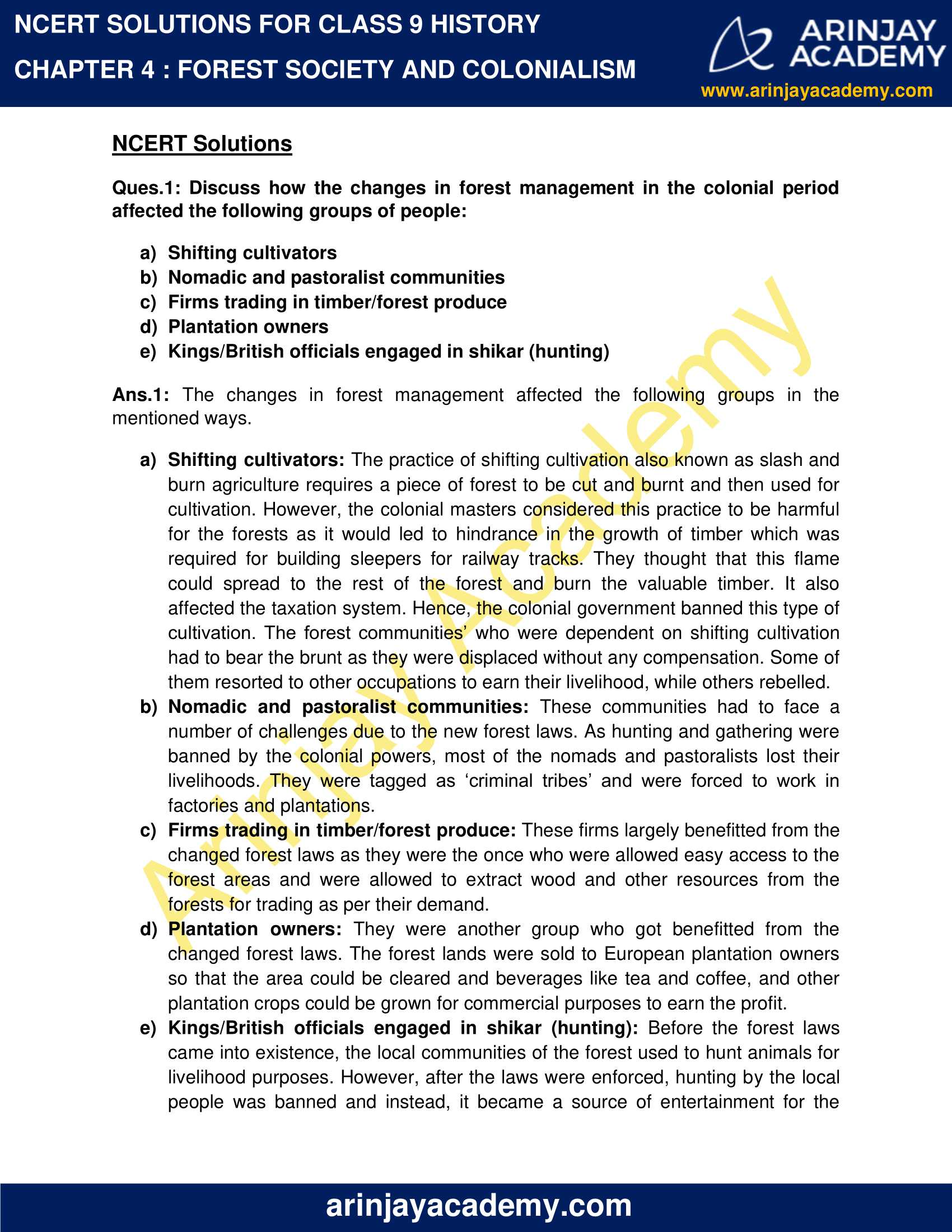 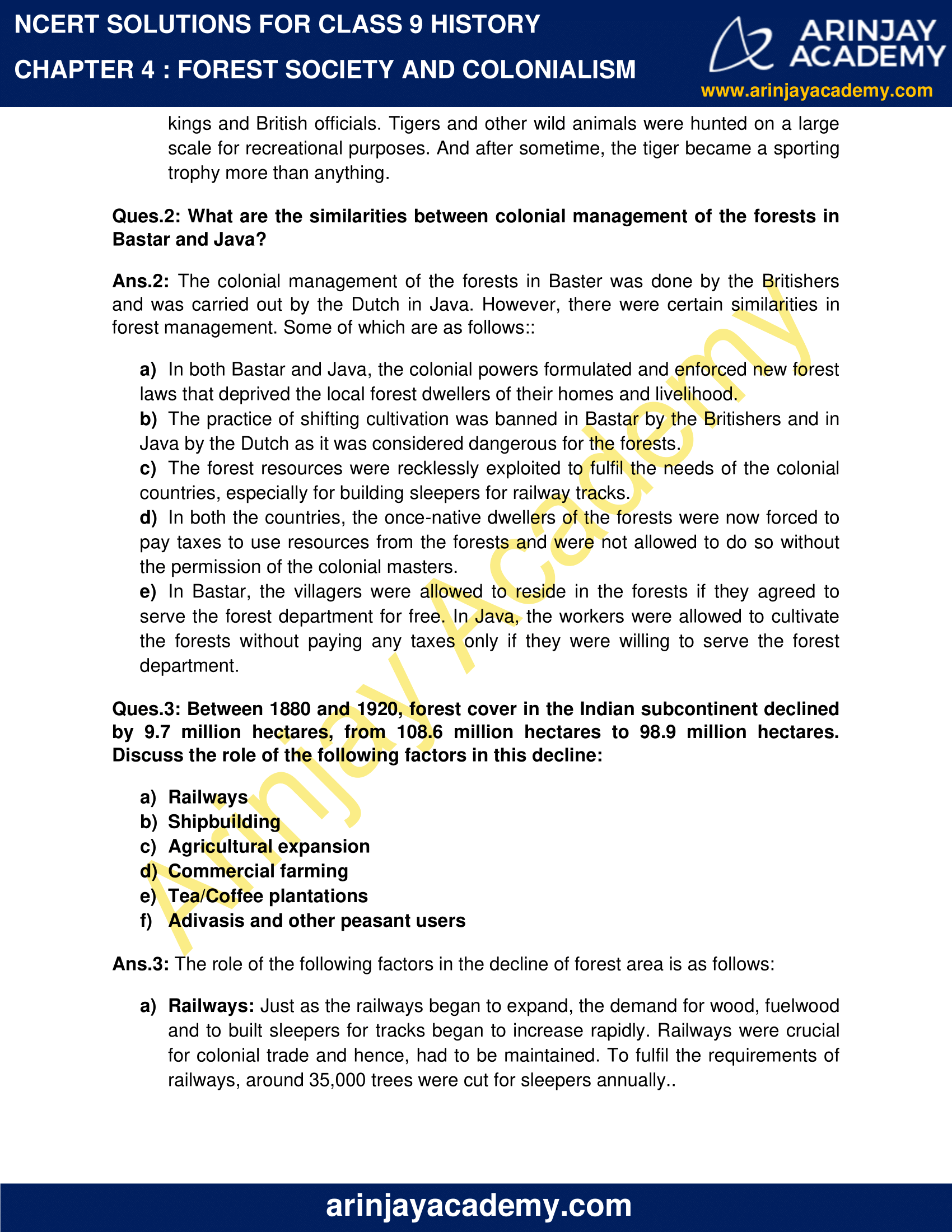 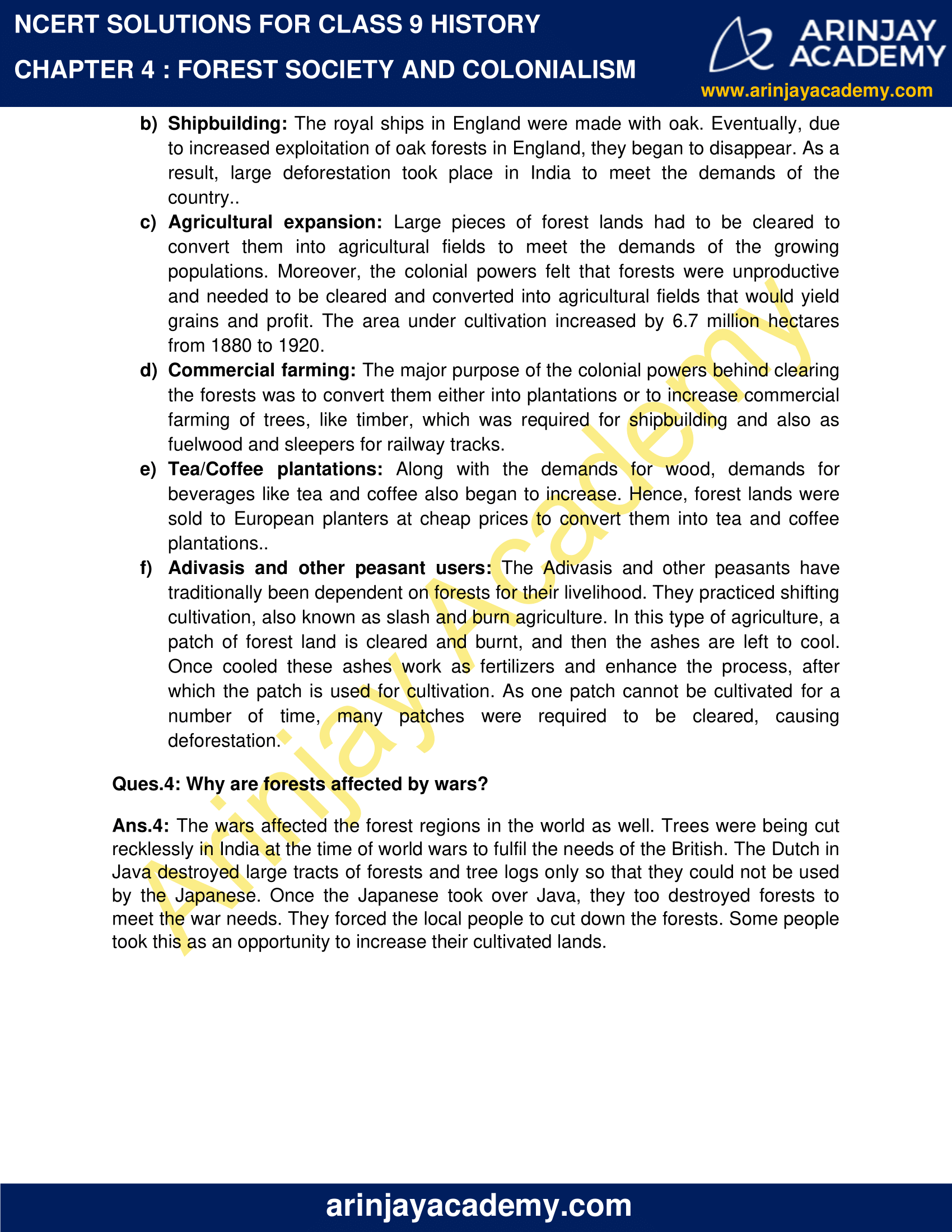 Ques.1: Discuss how the changes in forest management in the colonial period affected the following groups of people:

Ans.1: The changes in forest management affected the following groups in the mentioned ways.

a) Shifting cultivators: The practice of shifting cultivation also known as slash and burn agriculture requires a piece of forest to be cut and burnt and then used for cultivation. However, the colonial masters considered this practice to be harmful for the forests as it would led to hindrance in the growth of timber which was required for building sleepers for railway tracks. They thought that this flame could spread to the rest of the forest and burn the valuable timber. It also affected the taxation system. Hence, the colonial government banned this type of cultivation. The forest communities’ who were dependent on shifting cultivation had to bear the brunt as they were displaced without any compensation. Some of them resorted to other occupations to earn their livelihood, while others rebelled.

b) Nomadic and pastoralist communities: These communities had to face a number of challenges due to the new forest laws. As hunting and gathering were banned by the colonial powers, most of the nomads and pastoralists lost their livelihoods. They were tagged as ‘criminal tribes’ and were forced to work in factories and plantations.

c) Firms trading in timber/forest produce: These firms largely benefitted from the changed forest laws as they were the once who were allowed easy access to the forest areas and were allowed to extract wood and other resources from the forests for trading as per their demand.

d) Plantation owners: They were another group who got benefitted from the changed forest laws. The forest lands were sold to European plantation owners so that the area could be cleared and beverages like tea and coffee, and other plantation crops could be grown for commercial purposes to earn the profit.

e) Kings/British officials engaged in shikar (hunting): Before the forest laws came into existence, the local communities of the forest used to hunt animals for livelihood purposes. However, after the laws were enforced, hunting by the local people was banned and instead, it became a source of entertainment for the kings and British officials. Tigers and other wild animals were hunted on a large scale for recreational purposes. And after sometime, the tiger became a sporting trophy more than anything.

Ques.2: What are the similarities between colonial management of the forests in Bastar and Java?

Ans.2: The colonial management of the forests in Baster was done by the Britishers and was carried out by the Dutch in Java. However, there were certain similarities in forest management. Some of which are as follows::

a) In both Bastar and Java, the colonial powers formulated and enforced new forest laws that deprived the local forest dwellers of their homes and livelihood.

b) The practice of shifting cultivation was banned in Bastar by the Britishers and in Java by the Dutch as it was considered dangerous for the forests.

c) The forest resources were recklessly exploited to fulfil the needs of the colonial countries, especially for building sleepers for railway tracks.

d) In both the countries, the once-native dwellers of the forests were now forced to pay taxes to use resources from the forests and were not allowed to do so without the permission of the colonial masters.

Ans.3: The role of the following factors in the decline of forest area is as follows:

a) Railways: Just as the railways began to expand, the demand for wood, fuelwood and to built sleepers for tracks began to increase rapidly. Railways were crucial for colonial trade and hence, had to be maintained. To fulfil the requirements of railways, around 35,000 trees were cut for sleepers annually..

b) Shipbuilding: The royal ships in England were made with oak. Eventually, due to increased exploitation of oak forests in England, they began to disappear. As a result, large deforestation took place in India to meet the demands of the country..

d) Commercial farming: The major purpose of the colonial powers behind clearing the forests was to convert them either into plantations or to increase commercial farming of trees, like timber, which was required for shipbuilding and also as fuelwood and sleepers for railway tracks.

f) Adivasis and other peasant users: The Adivasis and other peasants have traditionally been dependent on forests for their livelihood. They practiced shifting cultivation, also known as slash and burn agriculture. In this type of agriculture, a patch of forest land is cleared and burnt, and then the ashes are left to cool. Once cooled these ashes work as fertilizers and enhance the process, after which the patch is used for cultivation. As one patch cannot be cultivated for a number of time, many patches were required to be cleared, causing deforestation.

Ques.4: Why are forests affected by wars?

Ans.4: The wars affected the forest regions in the world as well. Trees were being cut recklessly in India at the time of world wars to fulfil the needs of the British. The Dutch in Java destroyed large tracts of forests and tree logs only so that they could not be used by the Japanese. Once the Japanese took over Java, they too destroyed forests to meet the war needs. They forced the local people to cut down the forests. Some people took this as an opportunity to increase their cultivated lands.

1.2 Sleepers on the Tracks

2. The Rise of Commercial Forestry

2.1 How were the Lives of People Affected

2.2 How did Forest Rules Affect Cultivation

3. Rebellion in the Forest

3.1 The people of Bastar

3.2 The Fears of the People

4.1 The Woodcutters of Java

Sleepers: These are the wooden planks which are used to hold the railway tracks together.

Scientific forestry:This system of forestry was introduced by the British. In this type of forestry, old trees are cut and new trees belonging to the same species are grown for commercial purposes.

Cultivation: The process of planting, sowing, harvesting crops on an array of land.