NCERT Solutions for Class 9 History Chapter 2 Socialism in Europe and the Russian Revolution (Social Science), contains solutions to various questions in Exercise for Chapter 2.  At the end of the Solutions, all the keywords which are important to understand Socialism in Europe and the Russian Revolution Class 9 History, have been explained in a simple and easy to understand manner. We are providing NCERT Solutions for Class 9 all subjects which can be accessed by clicking here. 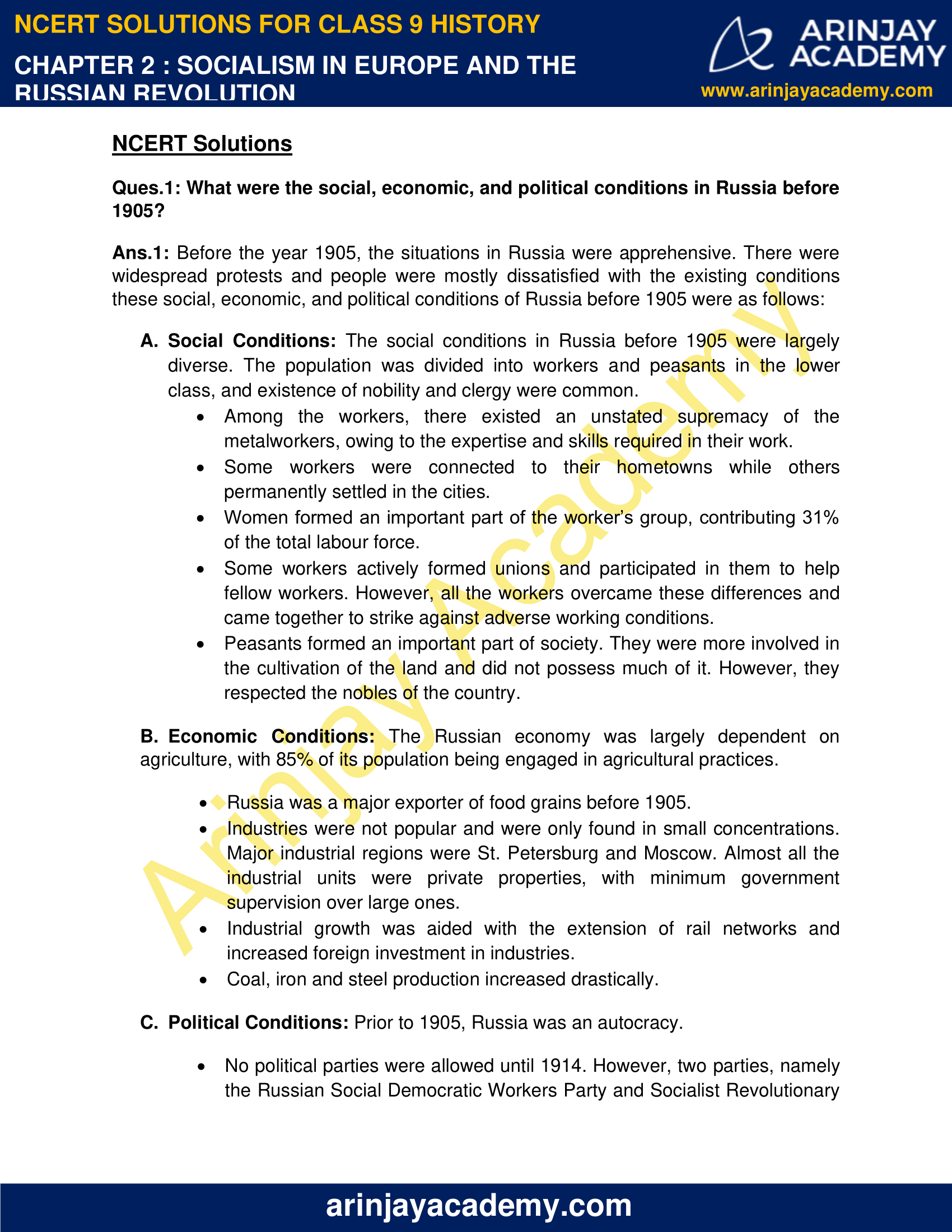 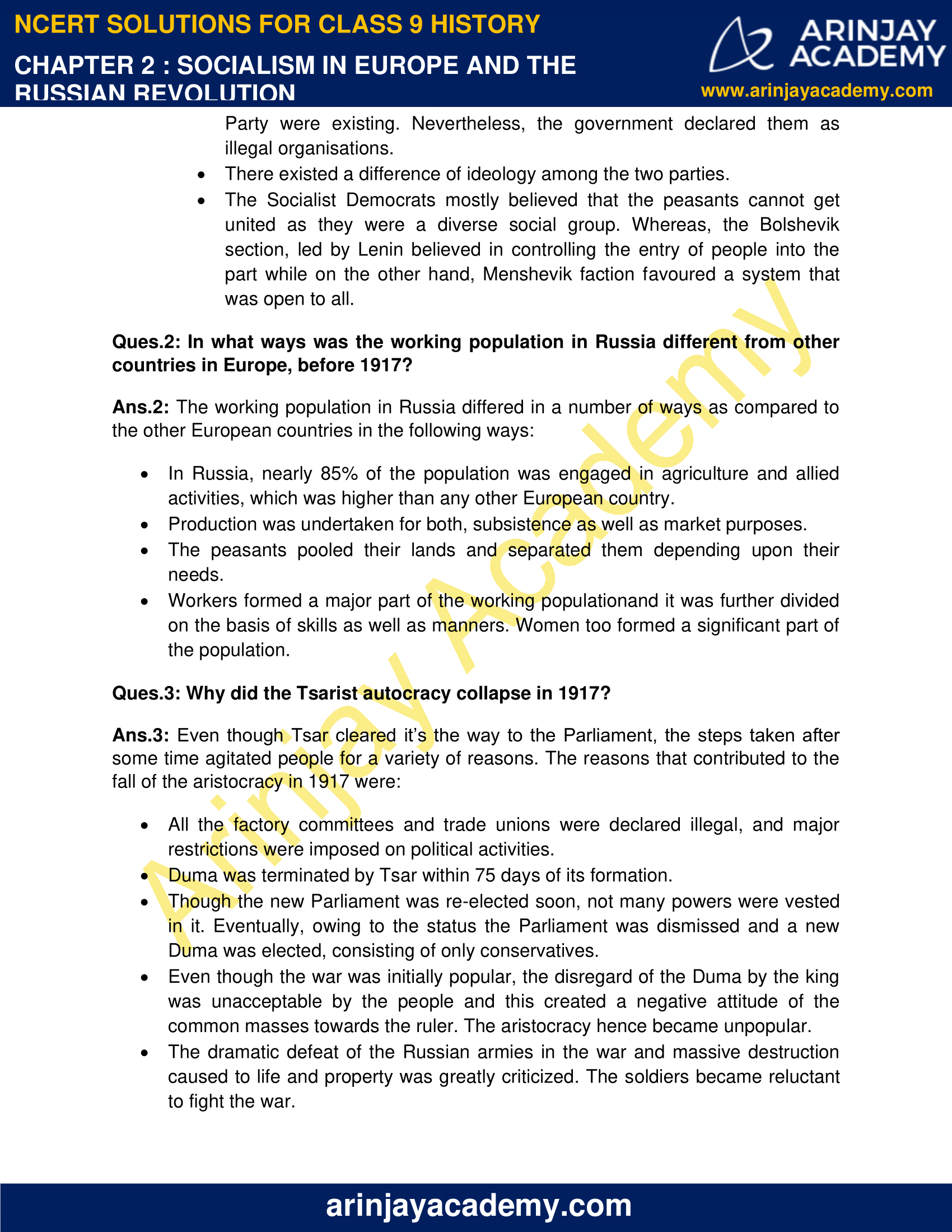 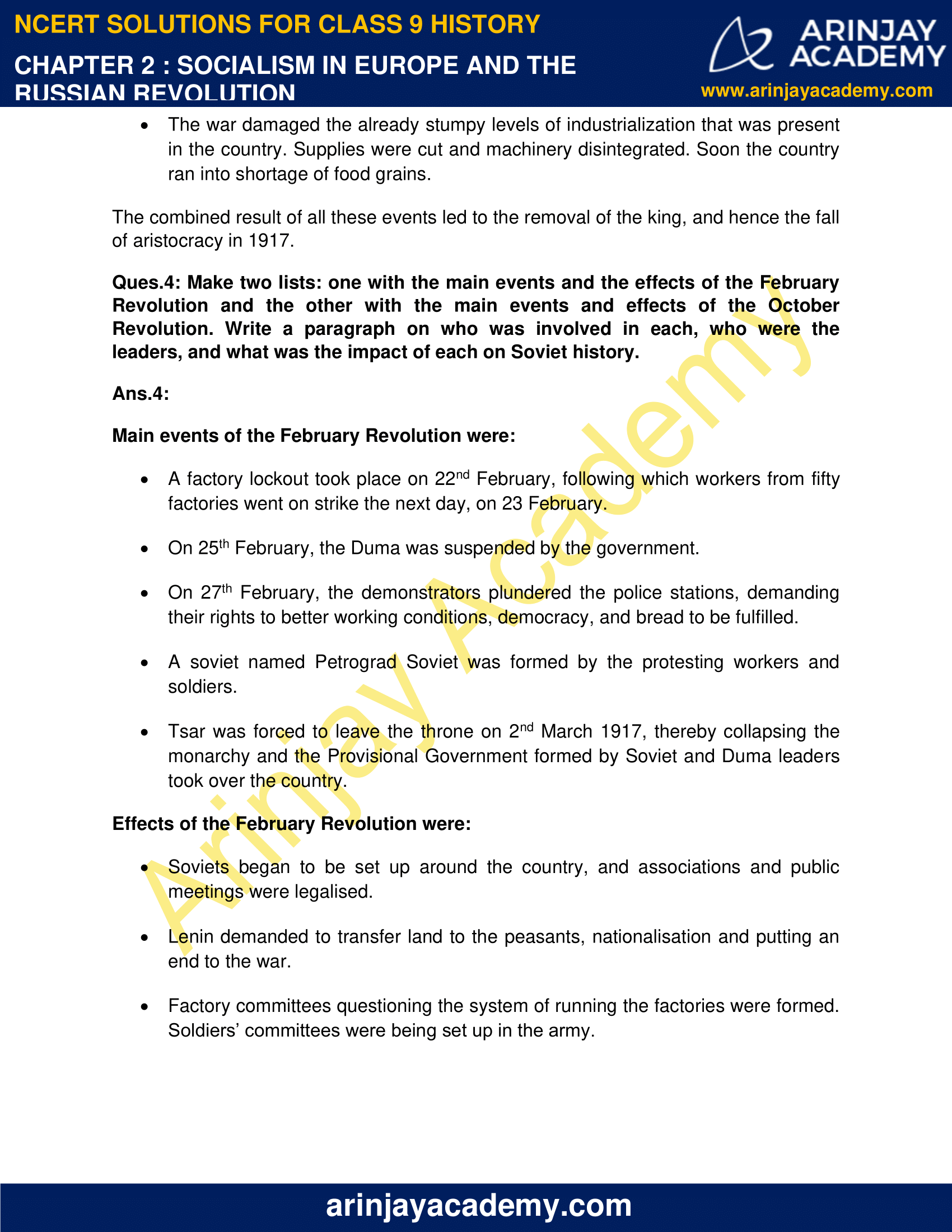 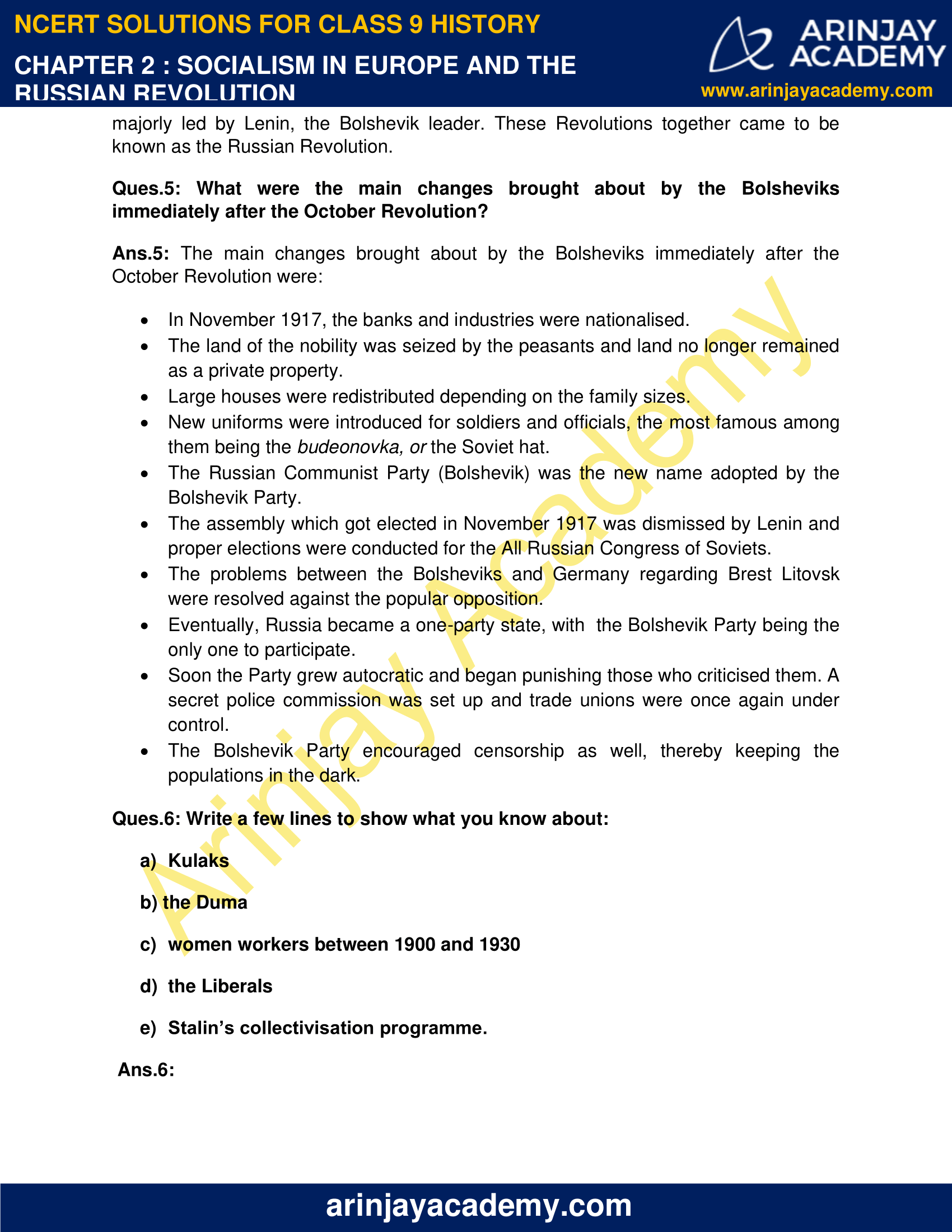 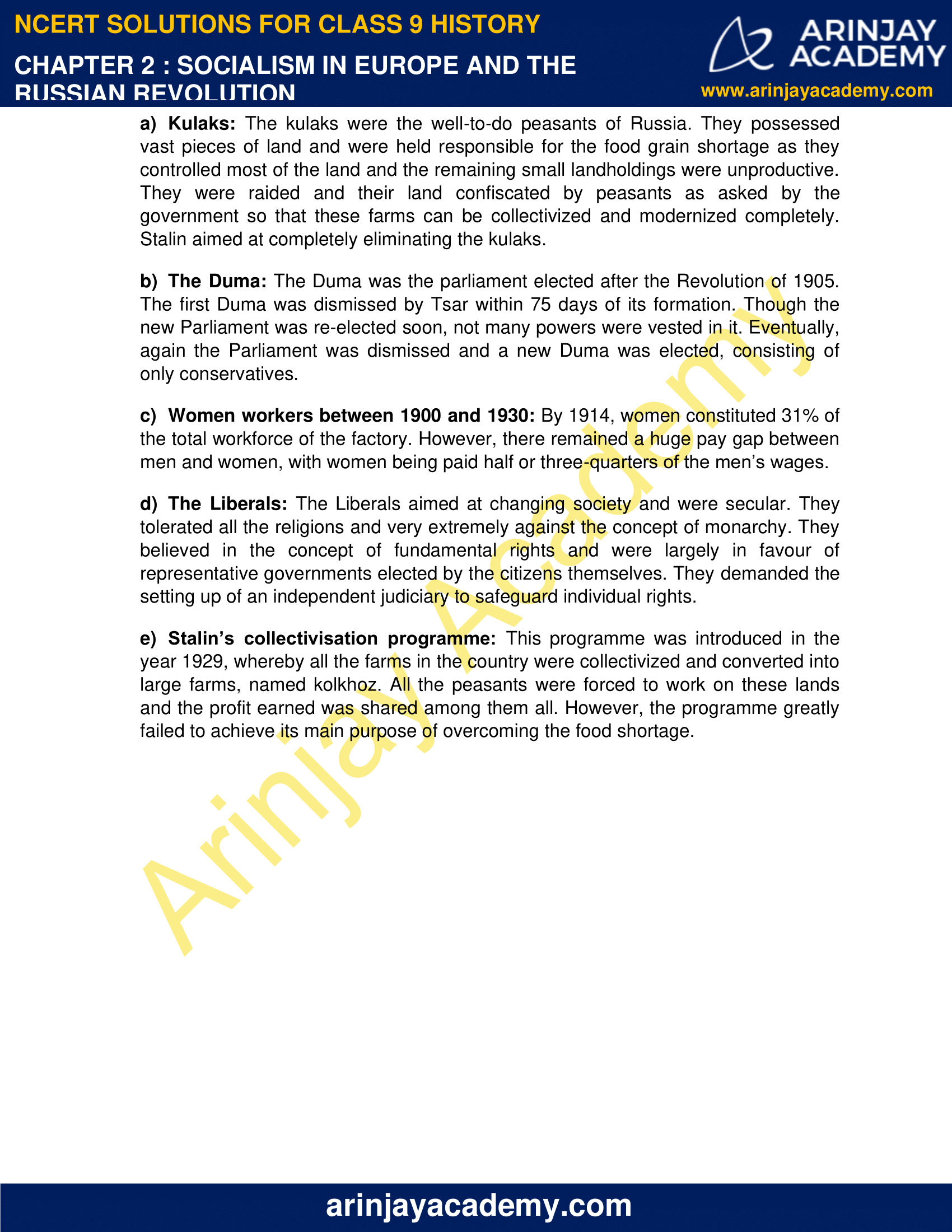 Ques.1: What were the social, economic, and political conditions in Russia before 1905?

Ans.1: Before the year 1905, the situations in Russia were apprehensive. There were widespread protests and people were mostly dissatisfied with the existing conditions these social, economic, and political conditions of Russia before 1905 were as follows:

A. Social Conditions: The social conditions in Russia before 1905 were largely diverse. The population was divided into workers and peasants in the lower class, and existence of nobility and clergy were common.

B. Economic Conditions: The Russian economy was largely dependent on agriculture, with 85% of its population being engaged in agricultural practices.

C. Political Conditions: Prior to 1905, Russia was an autocracy.

Ques.2: In what ways was the working population in Russia different from other countries in Europe, before 1917?

Ans.2: The working population in Russia differed in a number of ways as compared to the other European countries in the following ways:

Ques.3: Why did the Tsarist autocracy collapse in 1917?

Ans.3: Even though Tsar cleared it’s the way to the Parliament, the steps taken after some time agitated people for a variety of reasons. The reasons that contributed to the fall of the aristocracy in 1917 were:

The combined result of all these events led to the removal of the king, and hence the fall of aristocracy in 1917.

Main events of the February Revolution were:

Effects of the February Revolution were:

Main events of the October Revolution were:

Effects of the October Revolution were:

Ques.5: What were the main changes brought about by the Bolsheviks immediately after the October Revolution?

Ans.5: The main changes brought about by the Bolsheviks immediately after the October Revolution were:

Ques.6: Write a few lines to show what you know about:

a) Kulaks
b) the Duma
c) women workers between 1900 and 1930
d) the Liberals
e) Stalin’s collectivisation programme.

a) Kulaks: The kulaks were the well-to-do peasants of Russia. They possessed vast pieces of land and were held responsible for the food grain shortage as they controlled most of the land and the remaining small landholdings were unproductive. They were raided and their land confiscated by peasants as asked by the government so that these farms can be collectivized and modernized completely. Stalin aimed at completely eliminating the kulaks.

b) The Duma: The Duma was the parliament elected after the Revolution of 1905. The first Duma was dismissed by Tsar within 75 days of its formation. Though the new Parliament was re-elected soon, not many powers were vested in it. Eventually, again the Parliament was dismissed and a new Duma was elected, consisting of only conservatives.

c) Women workers between 1900 and 1930: By 1914, women constituted 31% of the total workforce of the factory. However, there remained a huge pay gap between men and women, with women being paid half or three-quarters of the men’s wages.

d) The Liberals: The Liberals aimed at changing society and were secular. They tolerated all the religions and very extremely against the concept of monarchy. They believed in the concept of fundamental rights and were largely in favour of representative governments elected by the citizens themselves. They demanded the setting up of an independent judiciary to safeguard individual rights.

e) Stalin’s collectivisation programme: This programme was introduced in the year 1929, whereby all the farms in the country were collectivized and converted into large farms, named kolkhoz. All the peasants were forced to work on these lands and the profit earned was shared among them all. However, the programme greatly failed to achieve its main purpose of overcoming the food shortage.

1. The Age of Social Change

1.3 The Coming of Socialism to Europe

2.5 The First World War and the Russian Empire

3. The February Revolution in Petrograd

4. What Changed after October?

5. The Global Influence of the Russian Revolution and the USSR

Suffragette movement: A movement demanding the right to vote for women.

Socialism: A system of structuring the society where the government owns all the property.

Real wage: The part of income indicating the quantity of the goods that can be bought with it.

Autonomy: The state of ruling one’s own country or self-governance..

Nomadism: A lifestyle where people are continuously keeps moving from one place to another to earn their living. These do not have settled lives.

Deported: Being removed from one’s own country by force.

Exiled: Living away from one’s own country under forceful conditions.