NCERT Solutions for Class 9 Geography Chapter 4 – Climate (Social Science), contains solutions to various questions in Exercise for Chapter 4.  At the end of the Solutions, all the keywords which are important to understand Climate Class 9 Geography, have been explained in a simple and easy to understand manner. We are providing NCERT Solutions for Class 9 all subjects which can be accessed by clicking here. 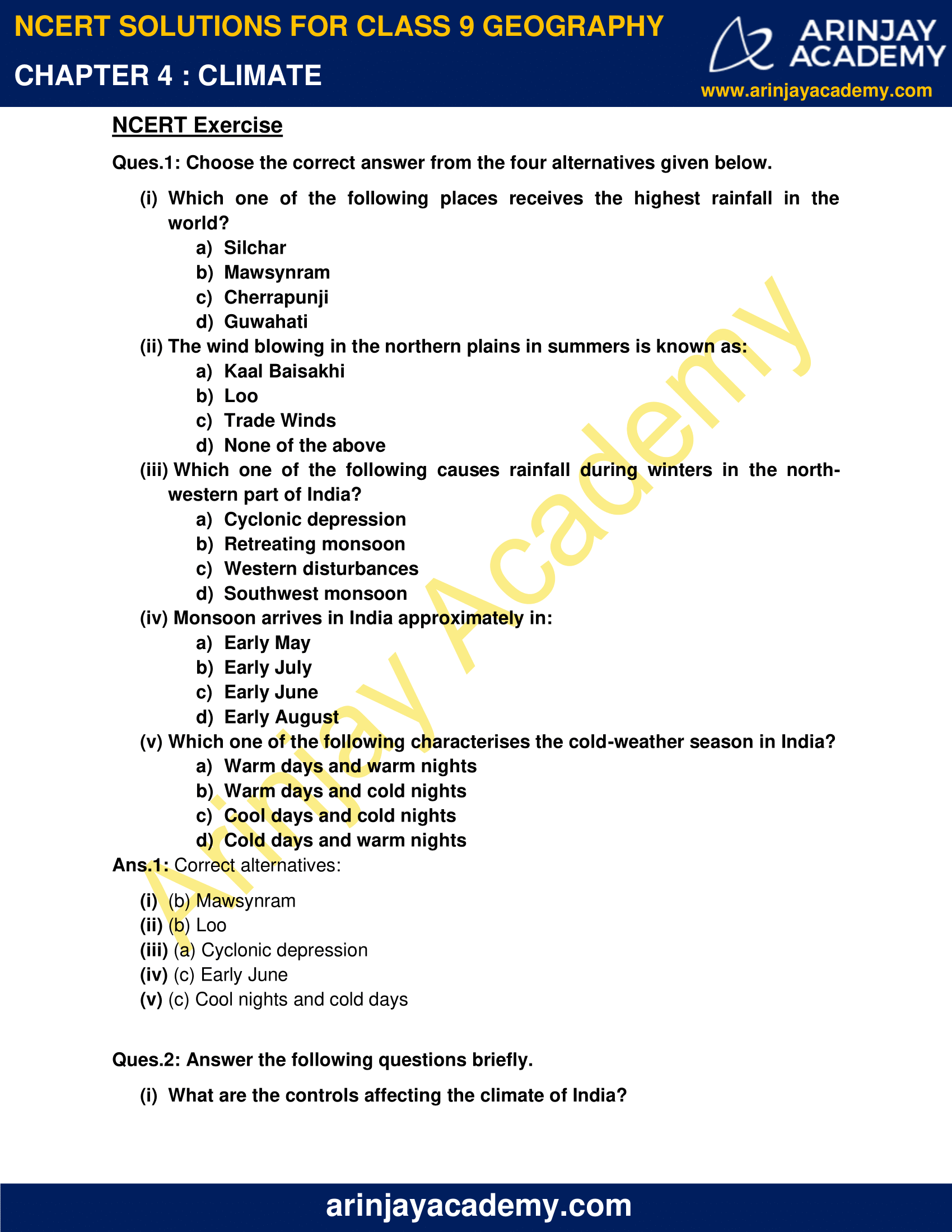 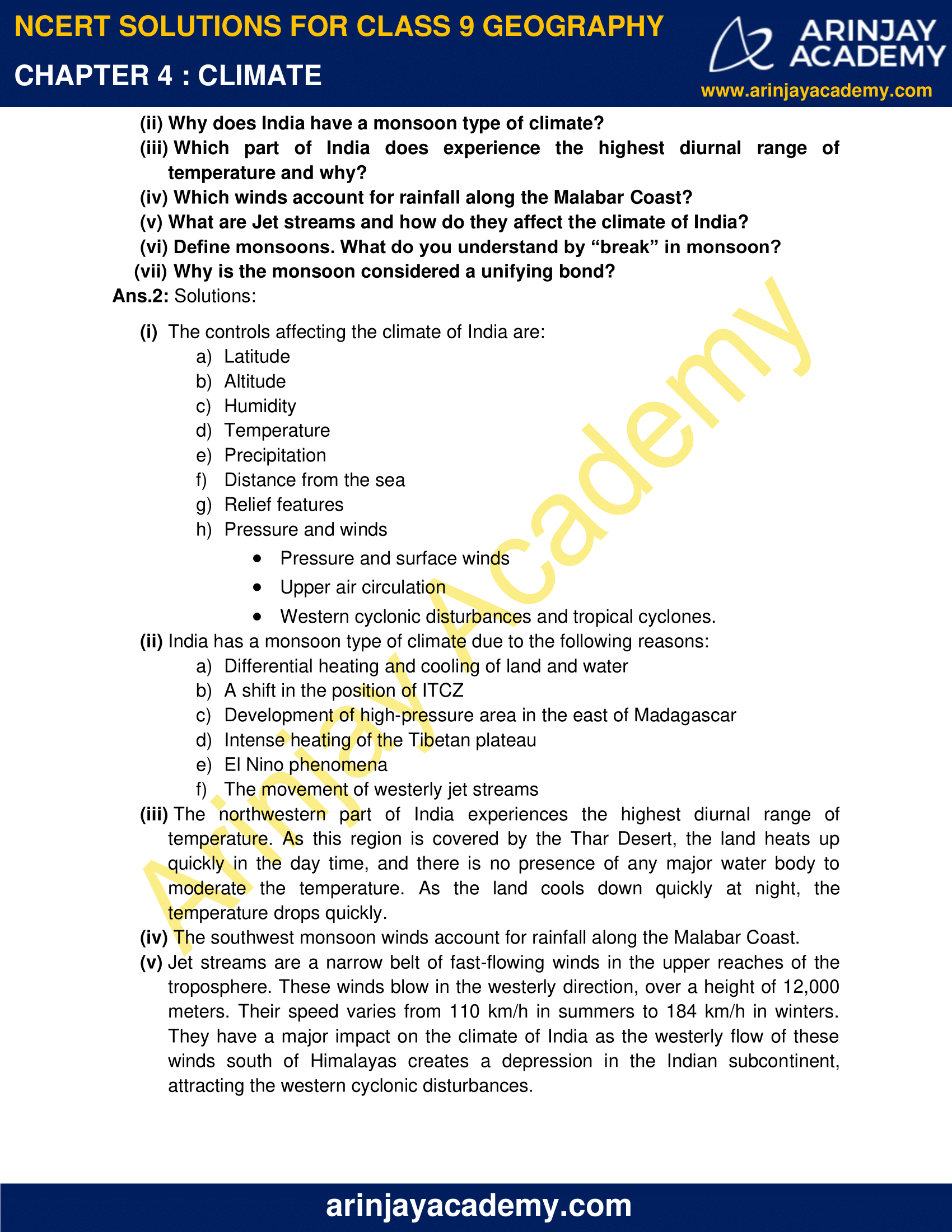 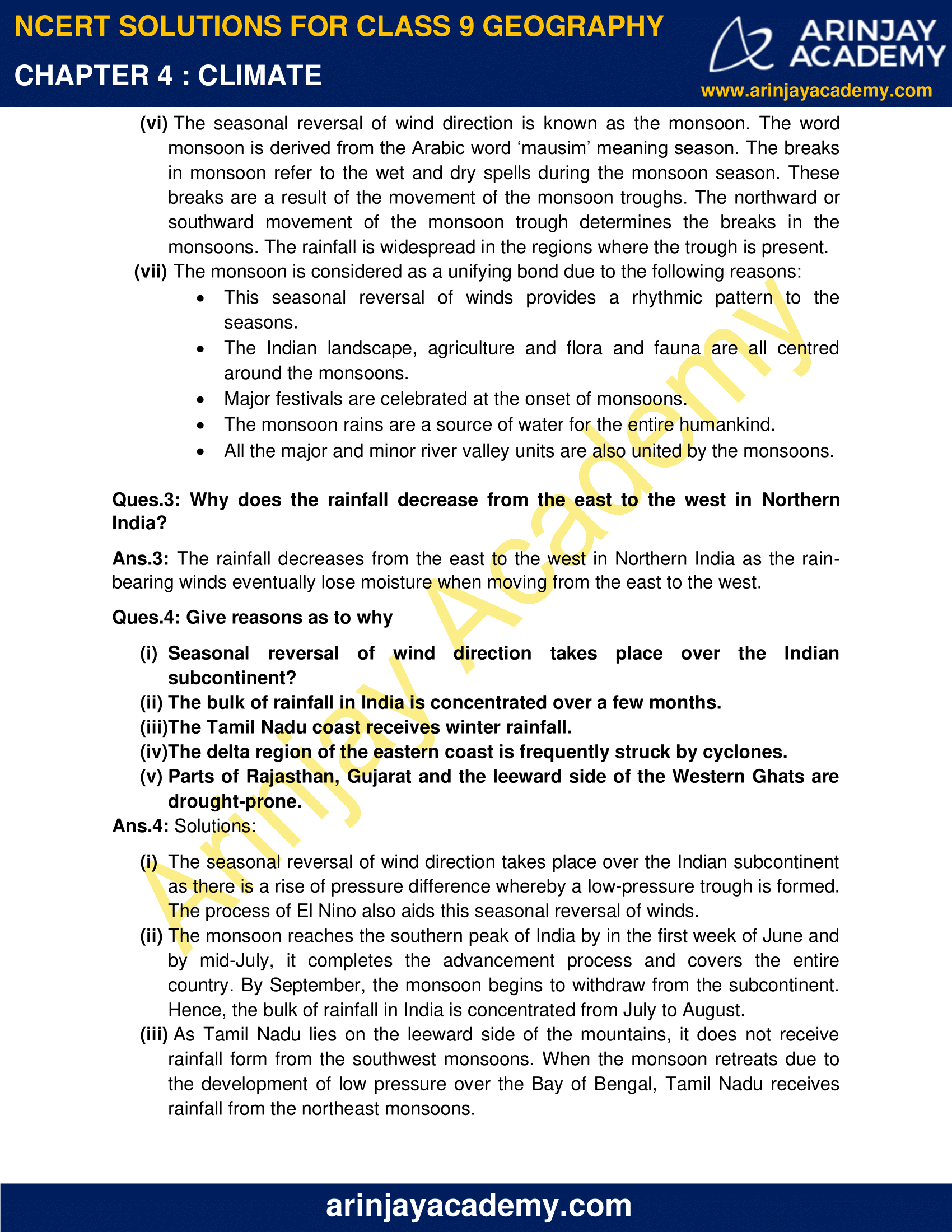 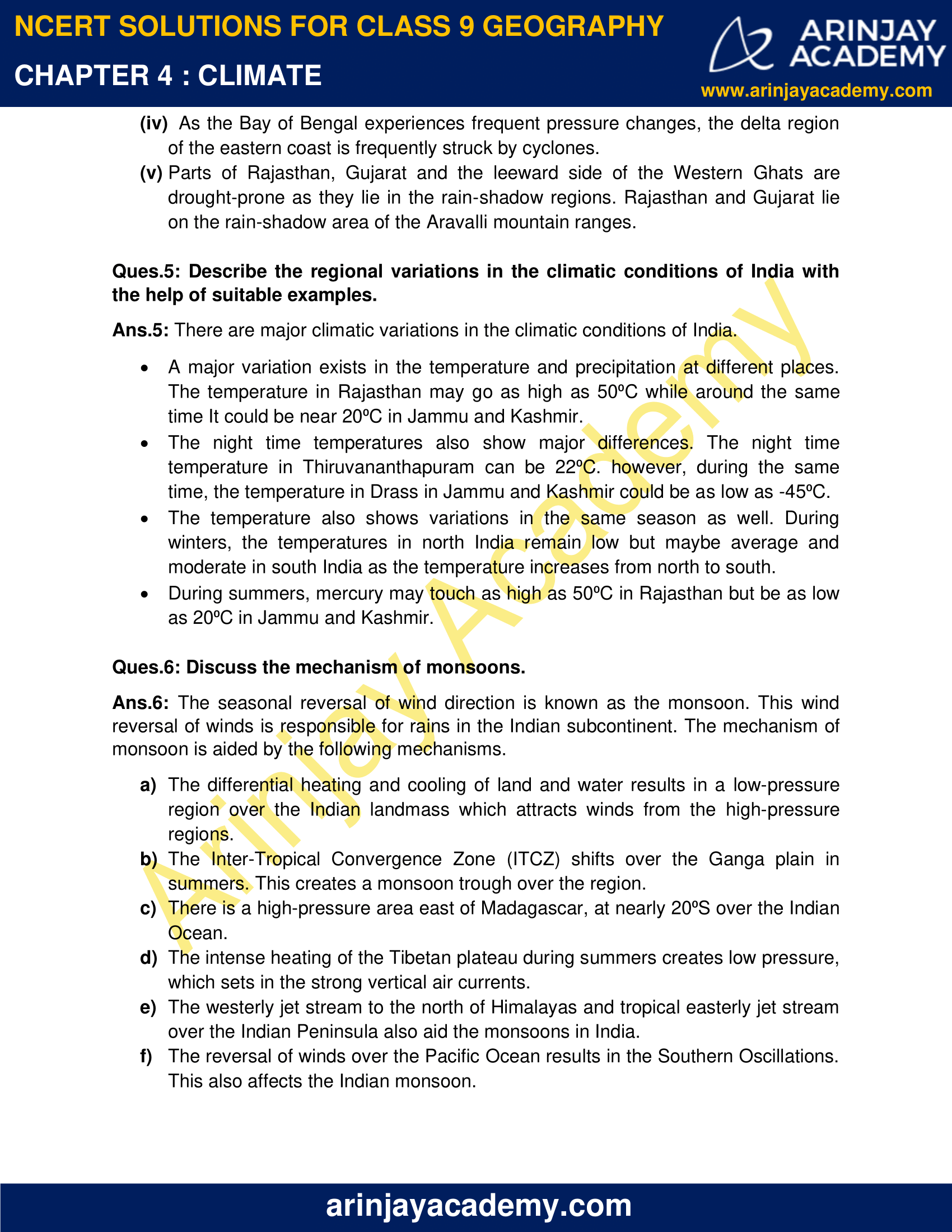 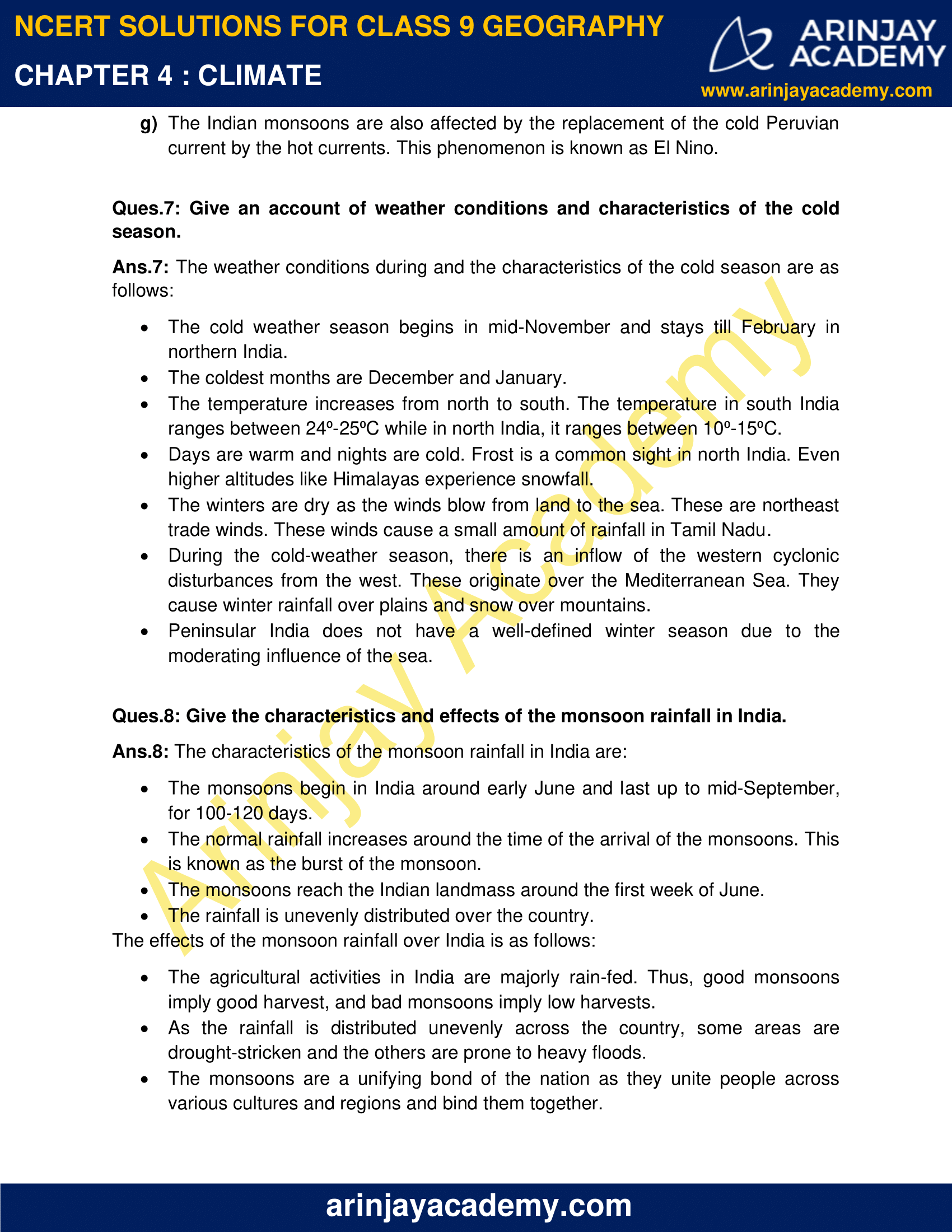 NCERT Solutions for Class 9 Geography Chapter 4 – Climate Exercises includes Question/Answers which helps you to understand the topic covered in Climate Class 9 Geography (Social Science), in a better manner to help you to score good marks in your examinations.

Ques.1: Choose the correct answer from the four alternatives given below.

(i) Which one of the following places receives the highest rainfall in the world?

(ii) The wind blowing in the northern plains in summers is known as:

(iii) Which one of the following causes rainfall during winters in the north-western part of India?

(v) Which one of the following characterises the cold-weather season in India?

(i) What are the controls affecting the climate of India?

(ii) Why does India have a monsoon type of climate?

(iii) Which part of India does experience the highest diurnal range of temperature and why?

(iv) Which winds account for rainfall along the Malabar Coast?

(v) What are Jet streams and how do they affect the climate of India?

(vi) Define monsoons. What do you understand by “break” in monsoon?

(vii) Why is the monsoon considered a unifying bond?

(i) The controls affecting the climate of India are:

(ii) India has a monsoon type of climate due to the following reasons:

(iv) The southwest monsoon winds account for rainfall along the Malabar Coast.

(v) Jet streams are a narrow belt of fast-flowing winds in the upper reaches of the troposphere. These winds blow in the westerly direction, over a height of 12,000 meters. Their speed varies from 110 km/h in summers to 184 km/h in winters. They have a major impact on the climate of India as the westerly flow of these winds south of Himalayas creates a depression in the Indian subcontinent, attracting the western cyclonic disturbances.

(vii) The monsoon is considered as a unifying bond due to the following reasons:

Ques.3: Why does the rainfall decrease from the east to the west in Northern India?

Ques.4: Give reasons as to why

(i) Seasonal reversal of wind direction takes place over the Indian subcontinent?

(ii) The bulk of rainfall in India is concentrated over a few months.

(iv) The delta region of the eastern coast is frequently struck by cyclones.

(v) Parts of Rajasthan, Gujarat and the leeward side of the Western Ghats are drought-prone.

(ii) The monsoon reaches the southern peak of India by in the first week of June and by mid-July, it completes the advancement process and covers the entire country. By September, the monsoon begins to withdraw from the subcontinent. Hence, the bulk of rainfall in India is concentrated from July to August.

(iii) As Tamil Nadu lies on the leeward side of the mountains, it does not receive rainfall form from the southwest monsoons. When the monsoon retreats due to the development of low pressure over the Bay of Bengal, Tamil Nadu receives rainfall from the northeast monsoons.

(iv) As the Bay of Bengal experiences frequent pressure changes, the delta region of the eastern coast is frequently struck by cyclones.

(v) Parts of Rajasthan, Gujarat and the leeward side of the Western Ghats are drought-prone as they lie in the rain-shadow regions. Rajasthan and Gujarat lie on the rain-shadow area of the Aravalli mountain ranges.

Ques.5: Describe the regional variations in the climatic conditions of India with the help of suitable examples.

Ans.5: There are major climatic variations in the climatic conditions of India.

Ques.6: Discuss the mechanism of monsoons.

Ans.6: The seasonal reversal of wind direction is known as the monsoon. This wind reversal of winds is responsible for rains in the Indian subcontinent. The mechanism of monsoon is aided by the following mechanisms.

Ques.7: Give an account of weather conditions and characteristics of the cold season.

Ans.7: The weather conditions during and the characteristics of the cold season are as follows:

Ques.8: Give the characteristics and effects of the monsoon rainfall in India.

Ans.8: The characteristics of the monsoon rainfall in India are:

The effects of the monsoon rainfall over India is as follows:

Climate: The total of weather conditions of a large area over a long time, mostly 31 years, is known as climate.

Weather: Weather refers to the atmospheric conditions of any area at a point of time.

Monsoon: The seasonal reversal of winds is known as monsoon.

Coriolis force: The force generated by the rotation of the earth is the Coriolis Force.