NCERT Solutions for Class 9 Geography Chapter 3 – Drainage (Social Science), contains solutions to various questions in Exercise for Chapter 3. At the end of the Solutions, all the keywords which are important to understand Drainage Class 9 Geography, have been explained in a simple and easy to understand manner. We are providing NCERT Solutions for Class 9 all subjects which can be accessed by clicking here. 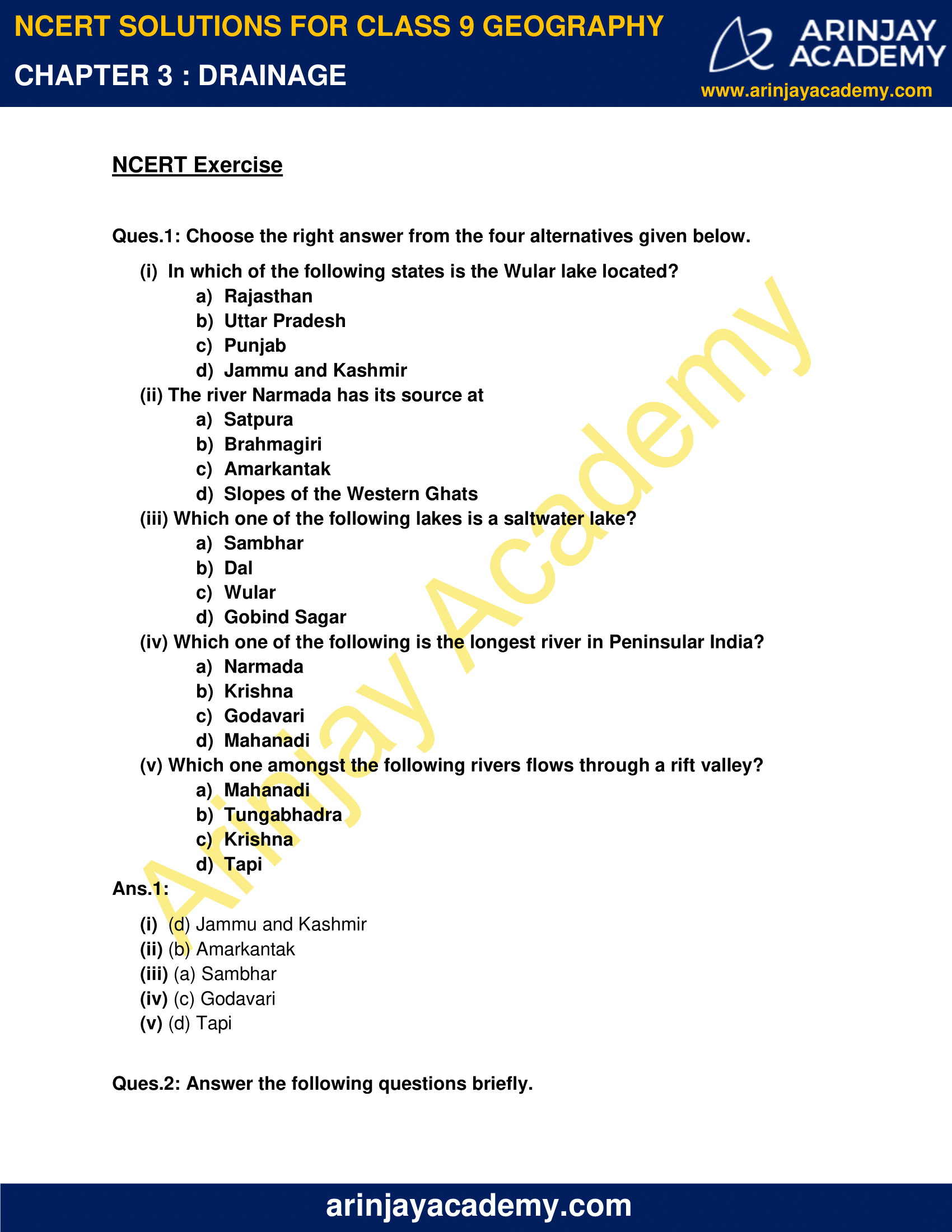 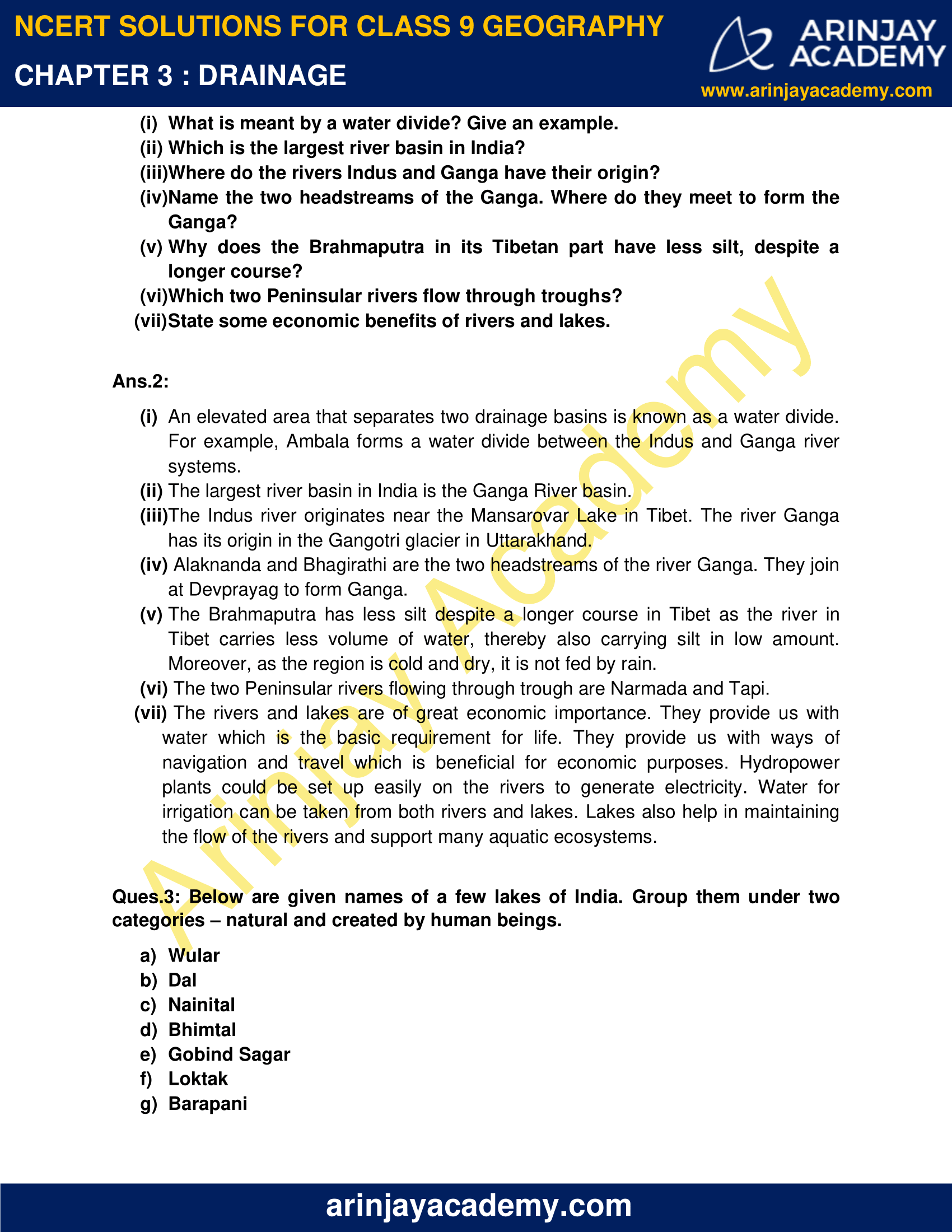 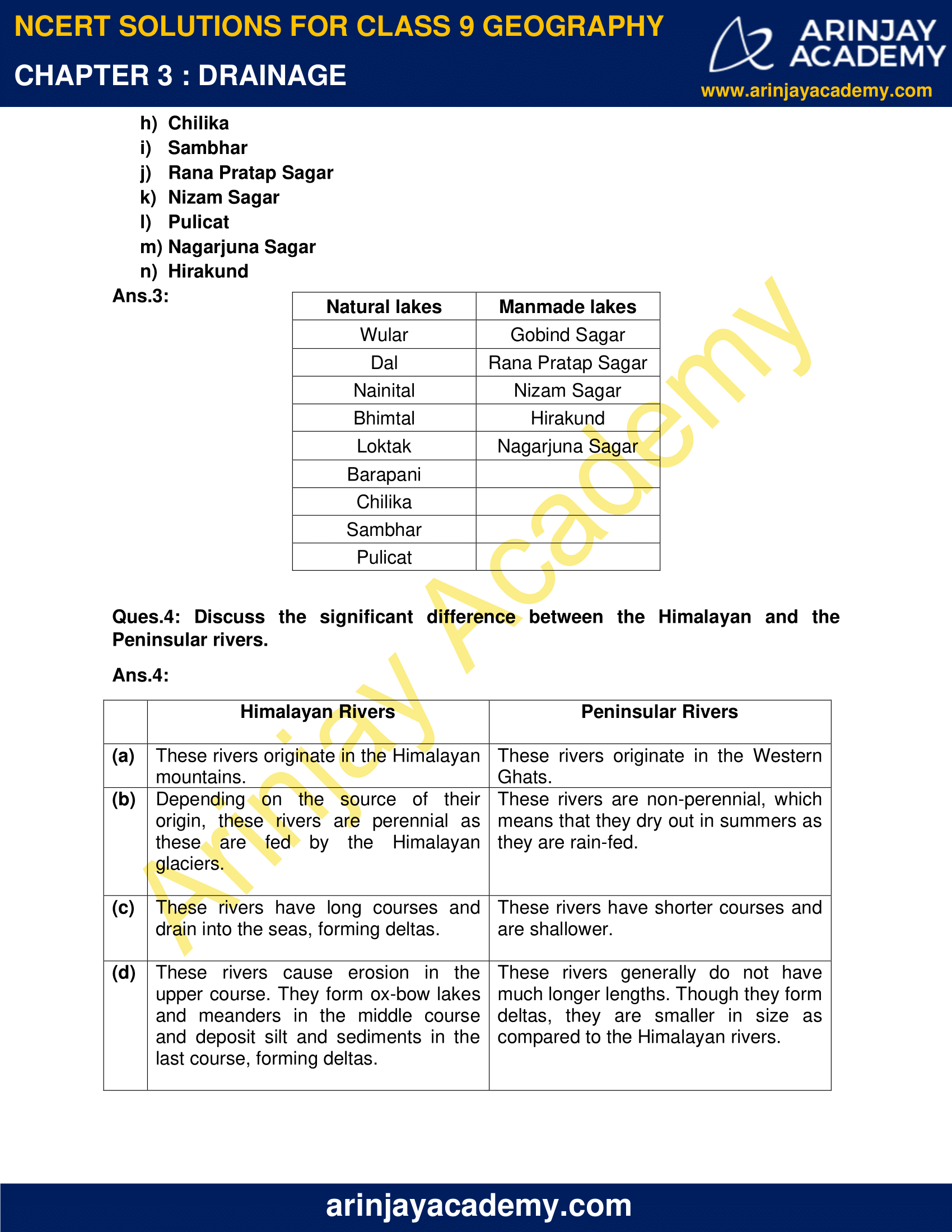 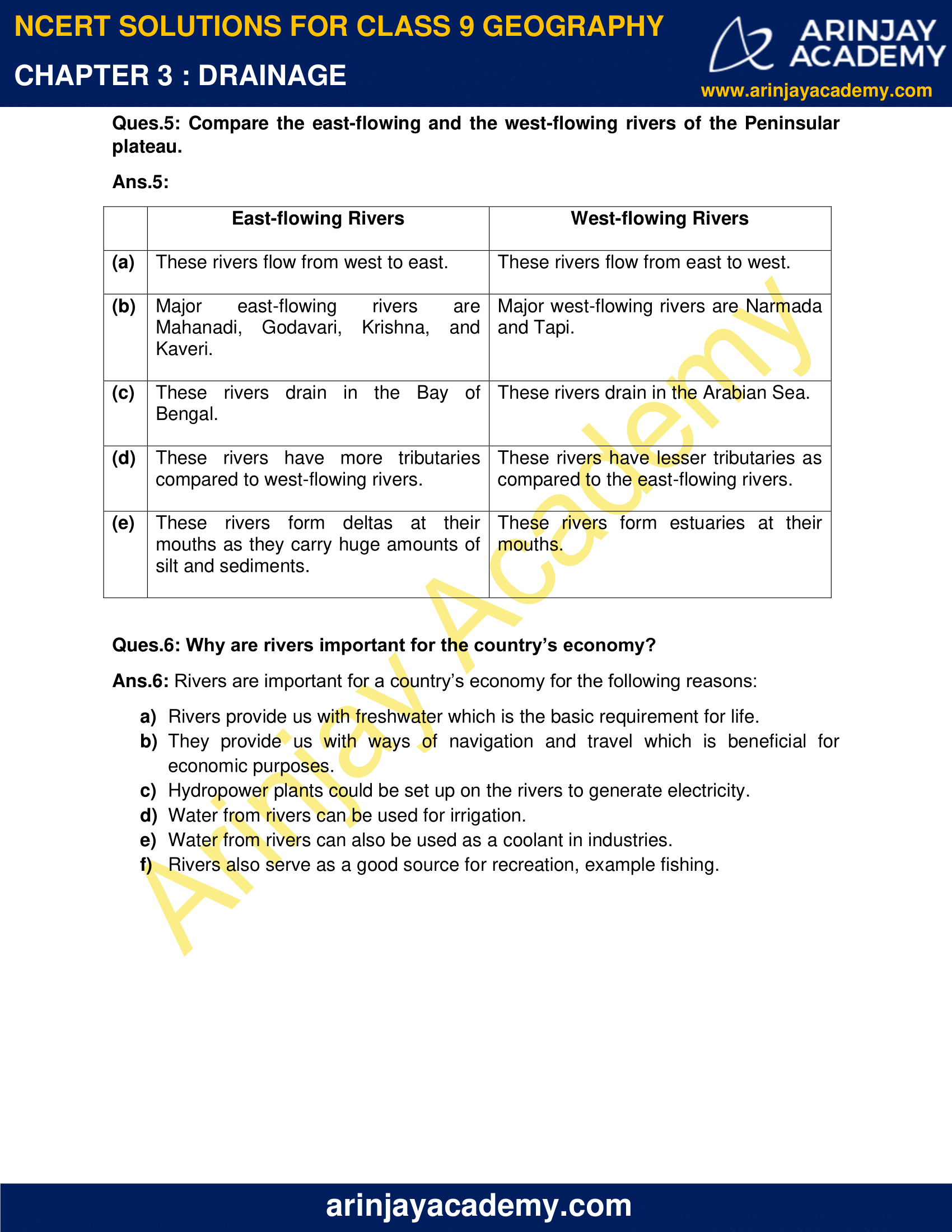 NCERT Solutions for Class 9 Geography Chapter 3 – Drainage Exercises includes Question/Answers which helps you to understand the topic covered in Drainage Class 9 Geography (Social Science), in a better manner to help you to score good marks in your examinations.

i. In which of the following states is the Wular lake located?

ii. The river Narmada has its source at

(iii) Which one of the following lakes is a saltwater lake?

(iv) Which one of the following is the longest river in Peninsular India?

(v) Which one amongst the following rivers flows through a rift valley?

(i) What is meant by a water divide? Give an example.
(ii) Which is the largest river basin in India?
(iii) Where do the rivers Indus and Ganga have their origin?
(iv) Name the two headstreams of the Ganga. Where do they meet to form the Ganga?
(v) Why does the Brahmaputra in its Tibetan part have less silt, despite a longer course?
(vi) Which two Peninsular rivers flow through troughs?
(vii) State some economic benefits of rivers and lakes.

(i) An elevated area that separates two drainage basins is known as a water divide. For example, Ambala forms a water divide between the Indus and Ganga river systems.

(ii) The largest river basin in India is the Ganga River basin.

(iii) The Indus river originates near the Mansarovar Lake in Tibet. The river Ganga has its origin in the Gangotri glacier in Uttarakhand.

(iv) Alaknanda and Bhagirathi are the two headstreams of the river Ganga. They join at Devprayag to form Ganga.

(v) The Brahmaputra has less silt despite a longer course in Tibet as the river in Tibet carries less volume of water, thereby also carrying silt in low amount. Moreover, as the region is cold and dry, it is not fed by rain.

(vi) The two Peninsular rivers flowing through trough are Narmada and Tapi.

(viii) The rivers and lakes are of great economic importance. They provide us with water which is the basic requirement for life. They provide us with ways of navigation and travel which is beneficial for economic purposes. Hydropower plants could be set up easily on the rivers to generate electricity. Water for irrigation can be taken from both rivers and lakes. Lakes also help in maintaining the flow of the rivers and support many aquatic ecosystems.

Ques.3: Below are given names of a few lakes of India. Group them under two categories – natural and created by human beings. 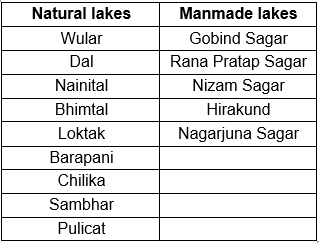 Ques.4: Discuss the significant difference between the Himalayan and the Peninsular rivers. 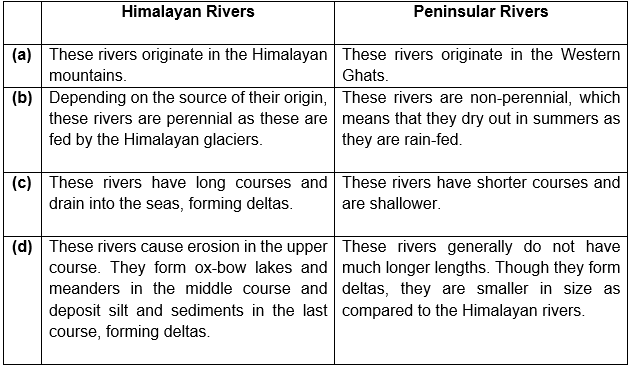 Ques.5: Compare the east-flowing and the west-flowing rivers of the Peninsular plateau. 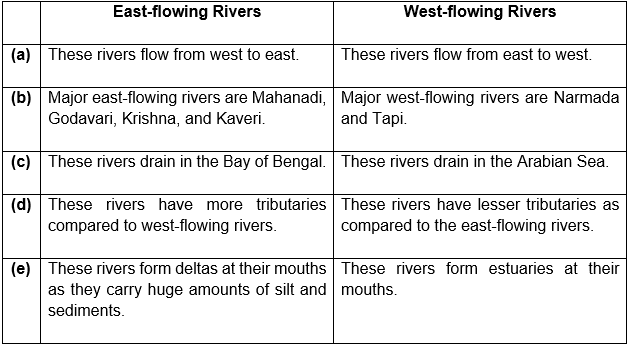 Ques.6: Why are rivers important for the country’s economy?

Ans.6: Rivers are important for a country’s economy for the following reasons:

a) Rivers provide us with freshwater which is the basic requirement for life.
b) They provide us with ways of navigation and travel which is beneficial for economic purposes.
c) Hydropower plants could be set up on the rivers to generate electricity.
d) Water from rivers can be used for irrigation.
e) Water from rivers can also be used as a coolant in industries.
f) Rivers also serve as a good source for recreation, example fishing.

Drainage: The river system of an area.

Drainage basin: The area drained by a river.

Perennial rivers: Rivers that flow throughout the year.

Non-perennial rivers: The seasonal rivers that flow only during monsoons.

River system: A river with its tributaries.