NCERT Solutions for Class 9 Geography Chapter 2 – Physical Features of India (Social Science), contains solutions to various questions in Exercise for Chapter 2.  At the end of the Solutions, all the keywords which are important to understand Physical Features of India Class 9 Geography, have been explained in a simple and easy to understand manner. We are providing NCERT Solutions for Class 9 all subjects which can be accessed by clicking here. 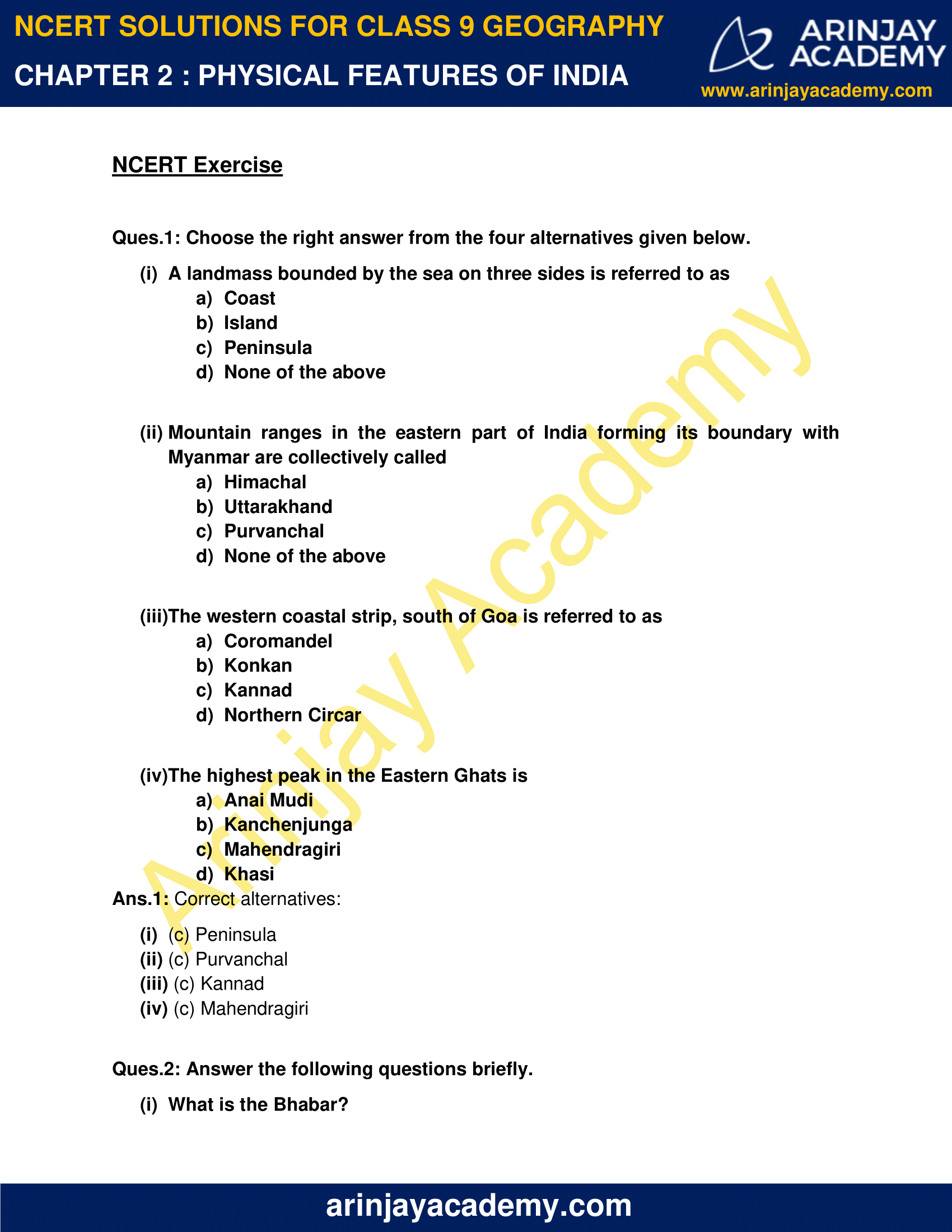 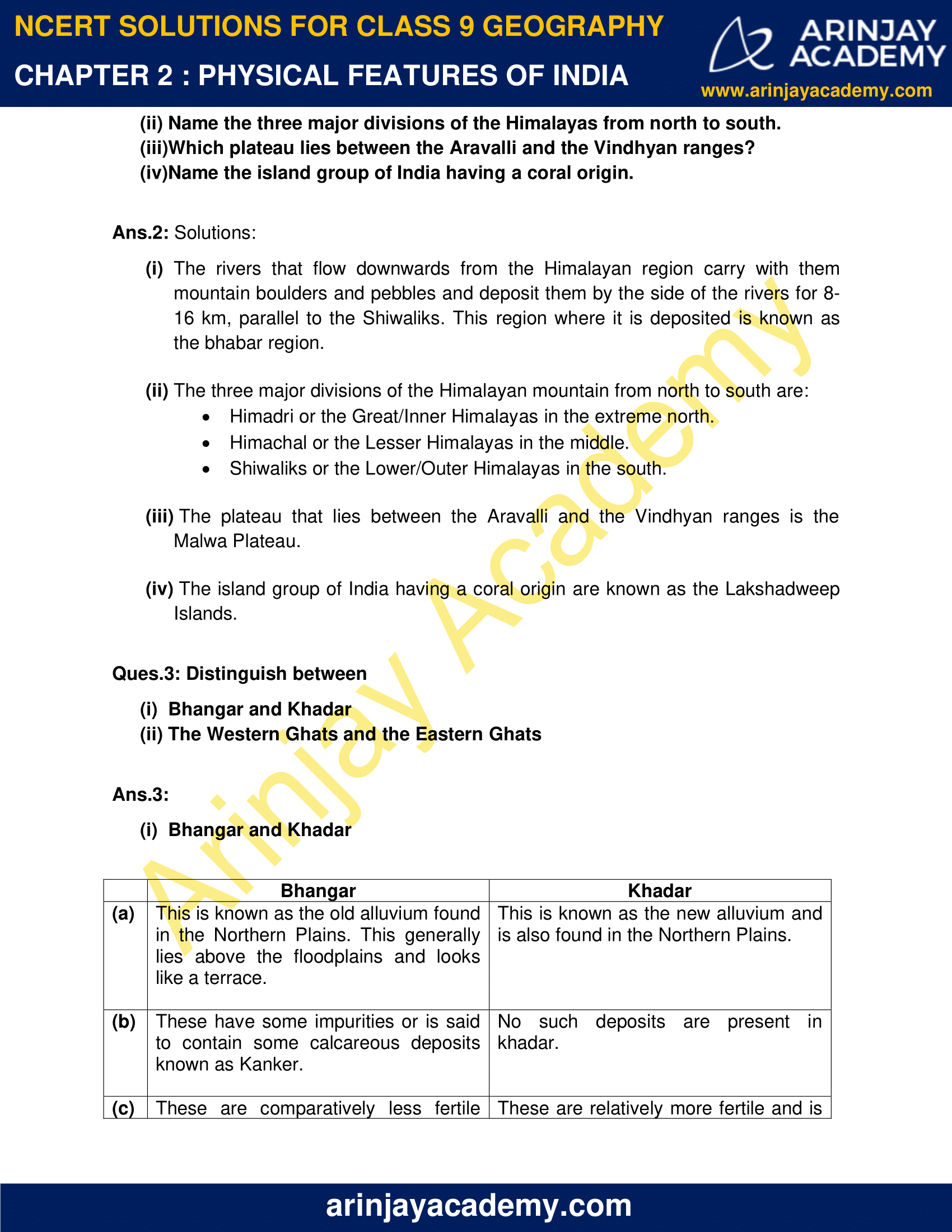 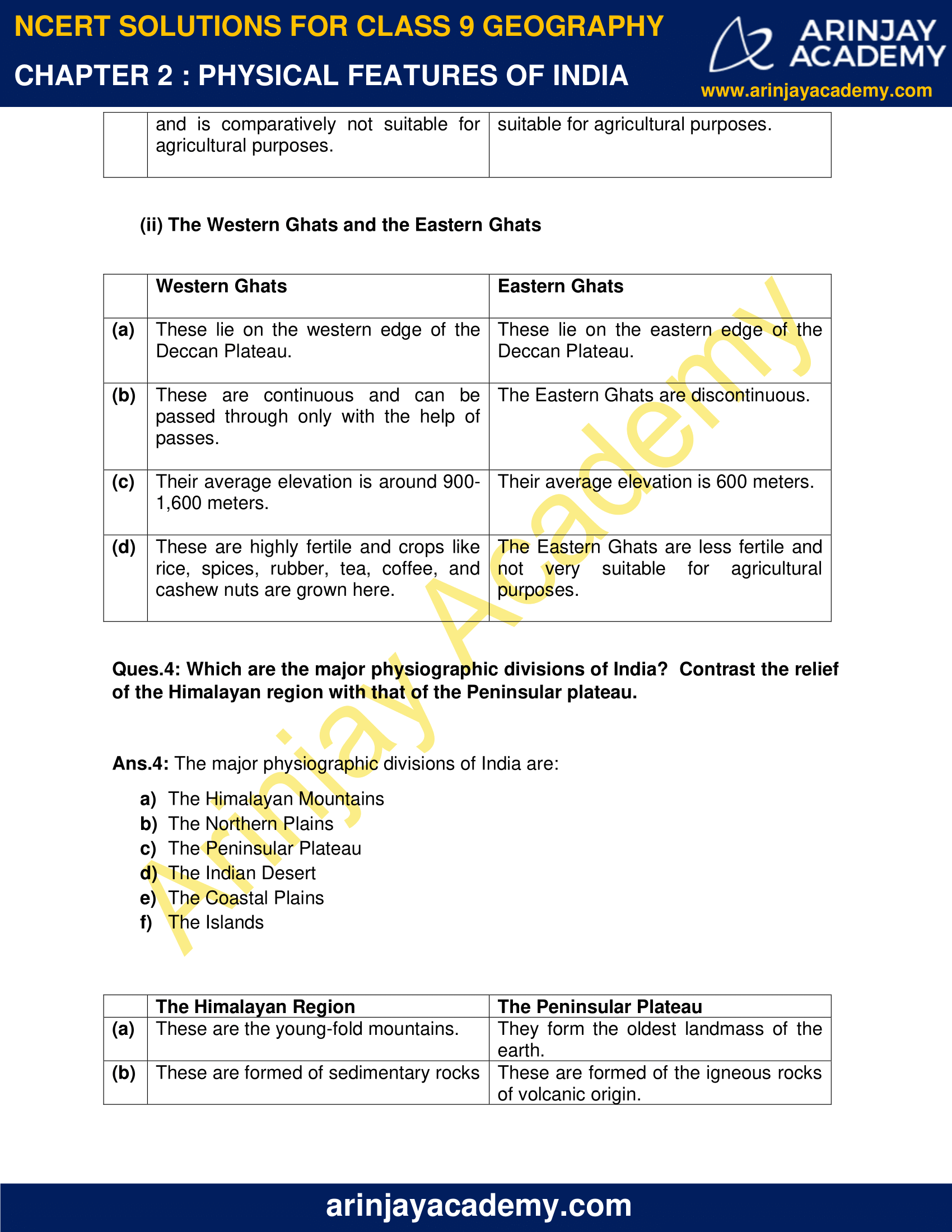 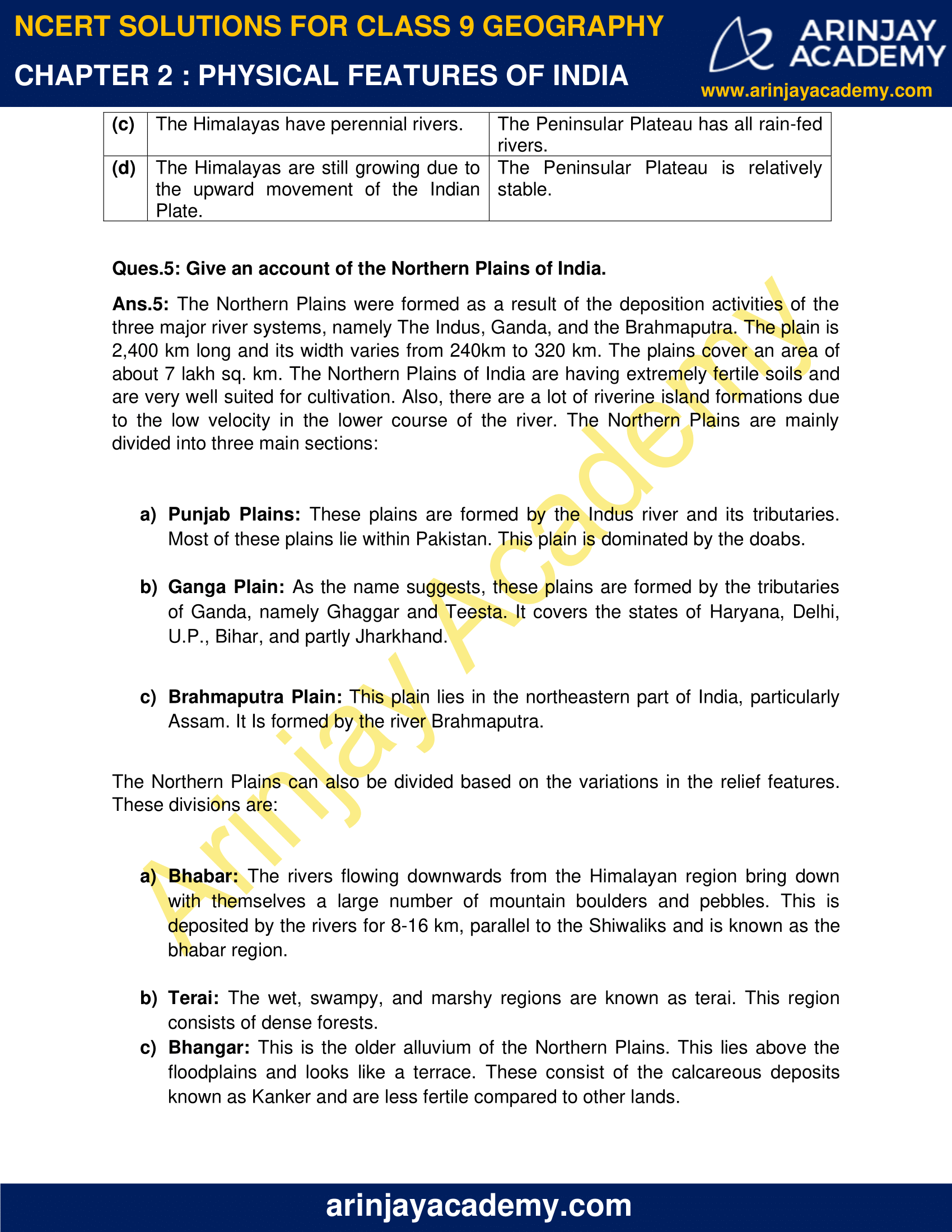 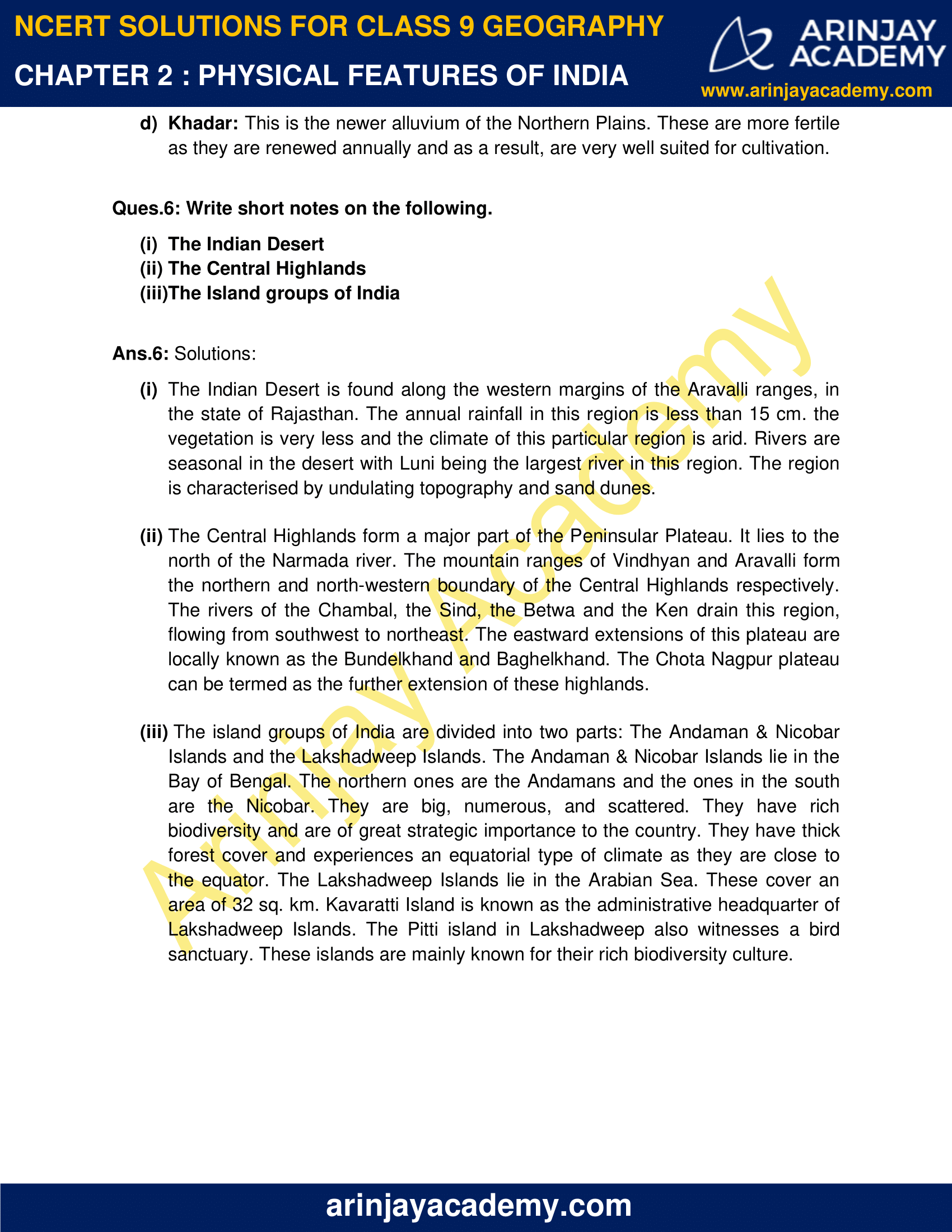 (a) Himachal
(b) Uttarakhand
(c) Purvanchal
(d) None of the above

(iii) The western coastal strip, south of Goa is referred to as

(iv) The highest peak in the Eastern Ghats is

(i) What is the Bhabar?
(ii) Name the three major divisions of the Himalayas from north to south.
(iii) Which plateau lies between the Aravalli and the Vindhyan ranges?
(iv) Name the island group of India having a coral origin.

(i) The rivers that flow downwards from the Himalayan region carry with them mountain boulders and pebbles and deposit them by the side of the rivers for 8-16 km, parallel to the Shiwaliks. This region where it is deposited is known as the bhabar region.

(ii) The three major divisions of the Himalayan mountain from north to south are:

(iii) The plateau that lies between the Aravalli and the Vindhyan ranges is the Malwa Plateau.

(iv) The island group of India having a coral origin are known as the Lakshadweep Islands.

(i) Bhangar and Khadar

(i) Bhangar and Khadar

Ques.4: Which are the major physiographic divisions of India?  Contrast the relief of the Himalayan region with that of the Peninsular plateau.

Ans.4: The major physiographic divisions of India are:

Ques.5: Give an account of the Northern Plains of India.

Ans.5: The Northern Plains were formed as a result of the deposition activities of the three major river systems, namely The Indus, Ganda, and the Brahmaputra. The plain is 2,400 km long and its width varies from 240km to 320 km. The plains cover an area of about 7 lakh sq. km. The Northern Plains of India are having extremely fertile soils and are very well suited for cultivation. Also, there are a lot of riverine island formations due to the low velocity in the lower course of the river. The Northern Plains are mainly divided into three main sections:

a) Punjab Plains: These plains are formed by the Indus river and its tributaries. Most of these plains lie within Pakistan. This plain is dominated by the doabs.

b) Ganga Plain: As the name suggests, these plains are formed by the tributaries of Ganda, namely Ghaggar and Teesta. It covers the states of Haryana, Delhi, U.P., Bihar, and partly Jharkhand.

c) Brahmaputra Plain: This plain lies in the northeastern part of India, particularly Assam. It Is formed by the river Brahmaputra.

The Northern Plains can also be divided based on the variations in the relief features. These divisions are:

a) Bhabar: The rivers flowing downwards from the Himalayan region bring down with themselves a large number of mountain boulders and pebbles. This is deposited by the rivers for 8-16 km, parallel to the Shiwaliks and is known as the bhabar region.

b) Terai: The wet, swampy, and marshy regions are known as terai. This region consists of dense forests.

c) Bhangar: This is the older alluvium of the Northern Plains. This lies above the floodplains and looks like a terrace. These consist of the calcareous deposits known as Kanker and are less fertile compared to other lands.

d) Khadar: This is the newer alluvium of the Northern Plains. These are more fertile as they are renewed annually and as a result, are very well suited for cultivation.

(i) The Indian Desert is found along the western margins of the Aravalli ranges, in the state of Rajasthan. The annual rainfall in this region is less than 15 cm. the vegetation is very less and the climate of this particular region is arid. Rivers are seasonal in the desert with Luni being the largest river in this region. The region is characterised by undulating topography and sand dunes.

(ii) The Central Highlands form a major part of the Peninsular Plateau. It lies to the north of the Narmada river. The mountain ranges of Vindhyan and Aravalli form the northern and north-western boundary of the Central Highlands respectively. The rivers of the Chambal, the Sind, the Betwa and the Ken drain this region, flowing from southwest to northeast. The eastward extensions of this plateau are locally known as the Bundelkhand and Baghelkhand. The Chota Nagpur plateau can be termed as the further extension of these highlands.

(iii) The island groups of India are divided into two parts: The Andaman & Nicobar Islands and the Lakshadweep Islands. The Andaman & Nicobar Islands lie in the Bay of Bengal. The northern ones are the Andamans and the ones in the south are the Nicobar. They are big, numerous, and scattered. They have rich biodiversity and are of great strategic importance to the country. They have thick forest cover and experiences an equatorial type of climate as they are close to the equator. The Lakshadweep Islands lie in the Arabian Sea. These cover an area of 32 sq. km. Kavaratti Island is known as the administrative headquarter of Lakshadweep Islands. The Pitti island in Lakshadweep also witnesses a bird sanctuary. These islands are mainly known for their rich biodiversity culture.

Physiography: It includes the relief features present in a region.

Plain: It is a large, flat area.

Plateau: It is a geographic feature which looks like a table land.

River system: A river with its tributaries known as a river system.

Delta: The area where the river deposit the silt and sediments before entering the sea and ocean is known as delta.