NCERT Solutions for Class 9 Civics Chapter 5 – Democratic Rights (Social Science), contains solutions to various questions in Exercise for Chapter 5.  At the end of the Solutions, all the keywords which are important to understand Democratic Rights Class 9 Civics, have been explained in a simple and easy to understand manner. We are providing NCERT Solutions for Class 9 all subjects which can be accessed by clicking here. 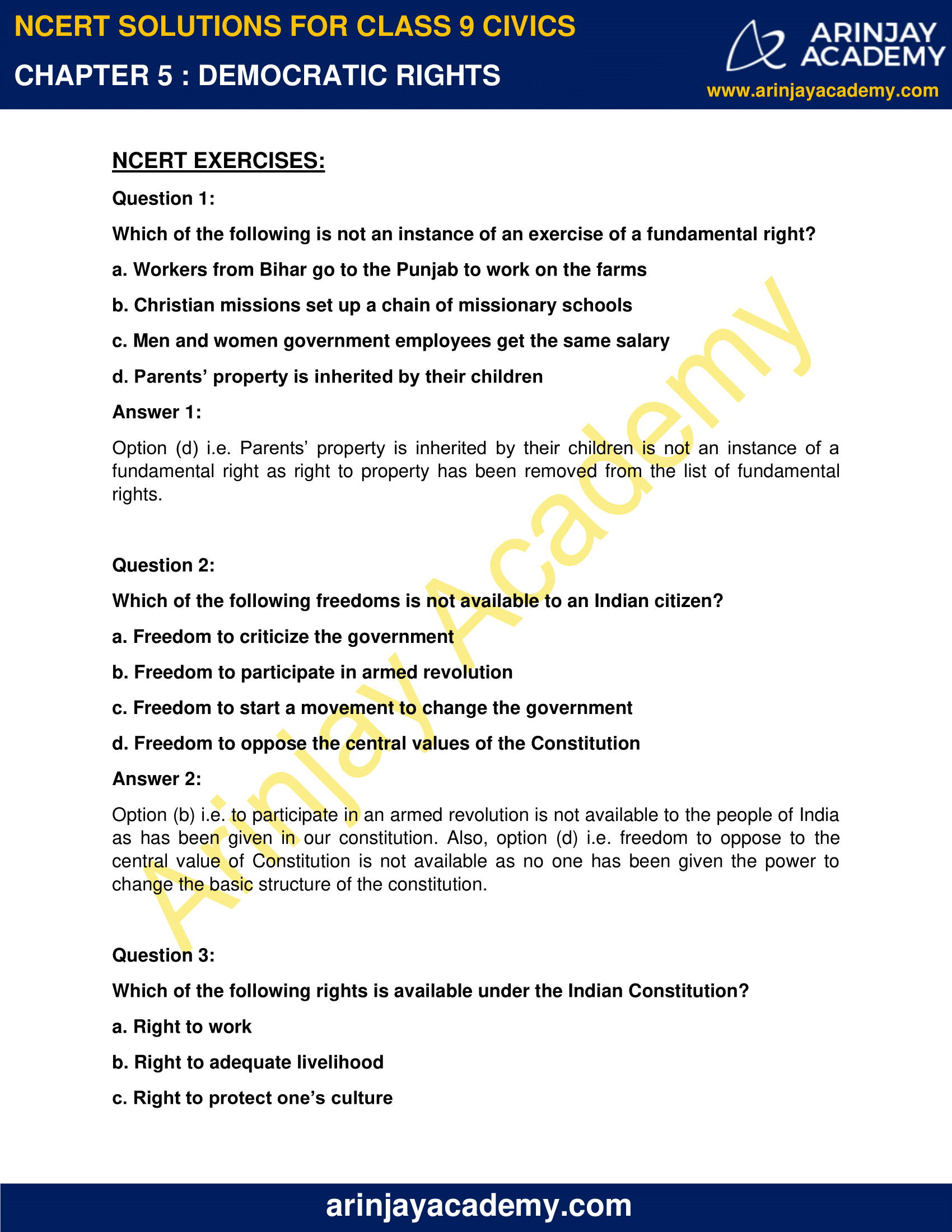 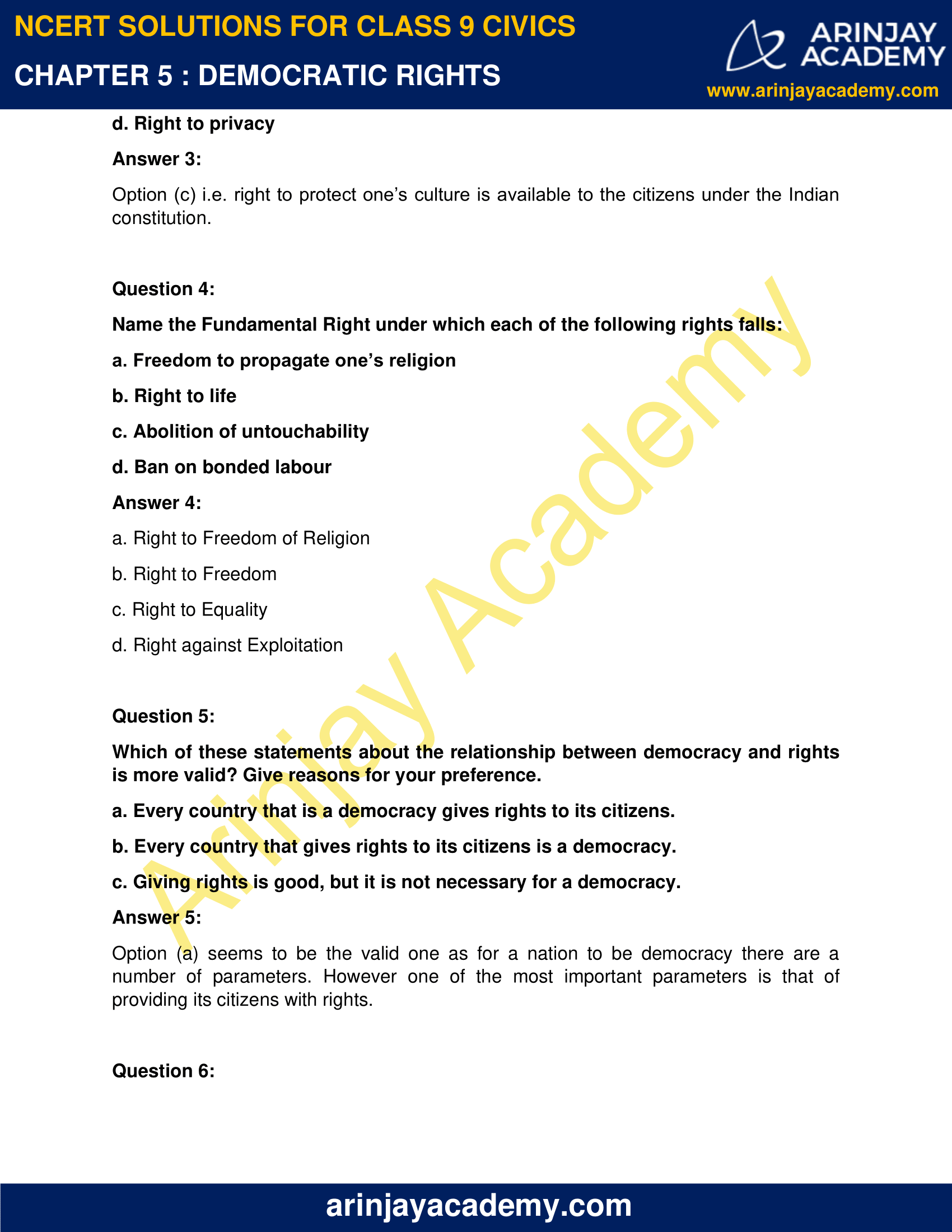 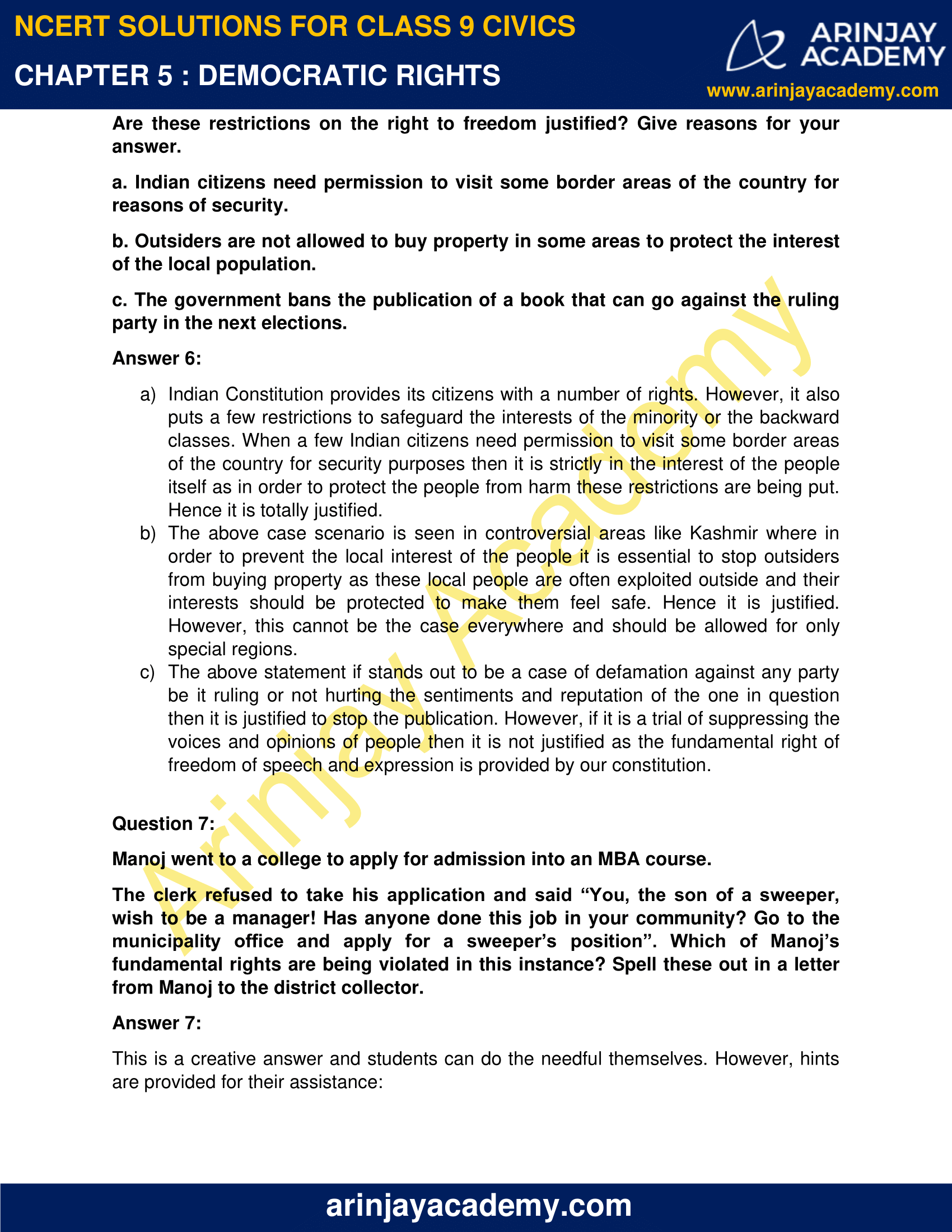 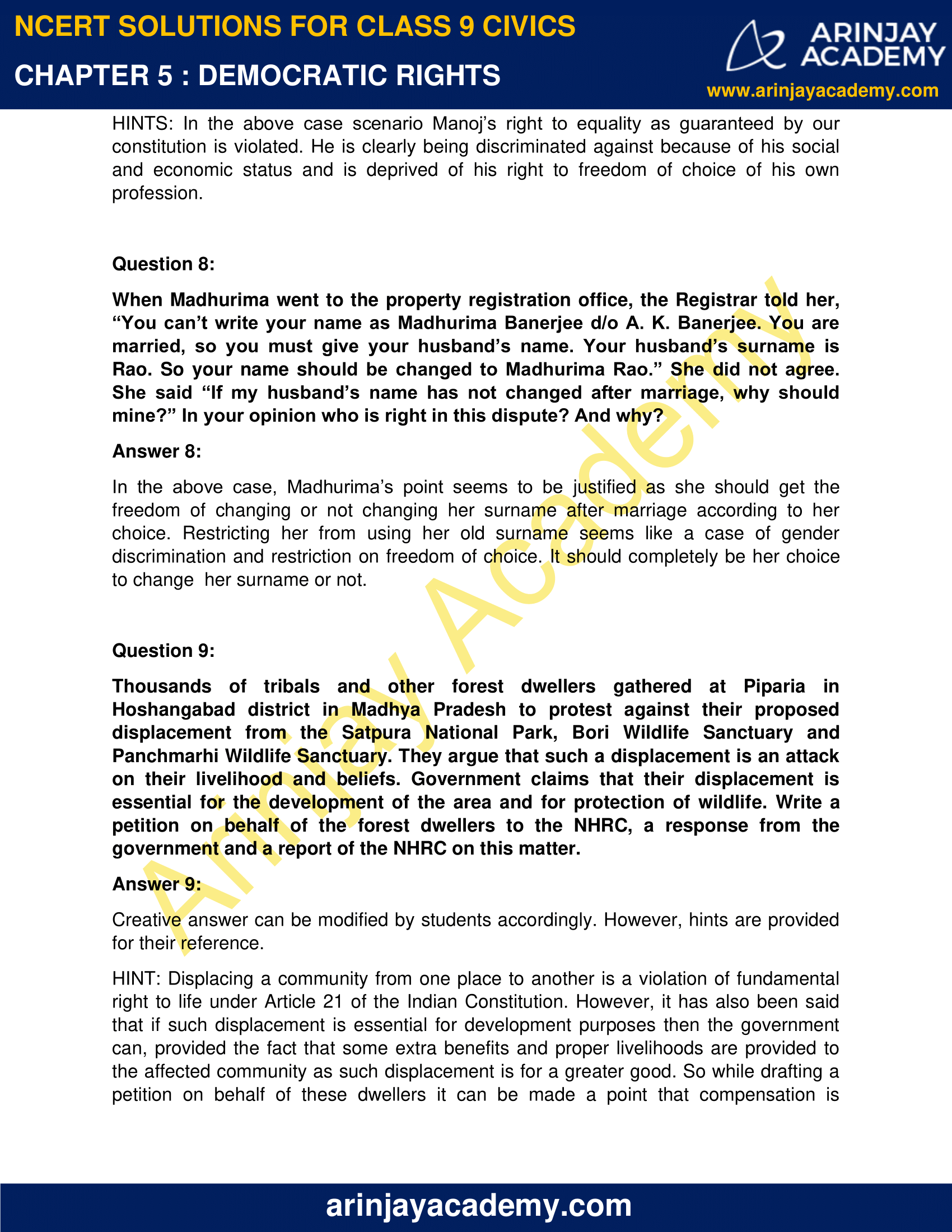 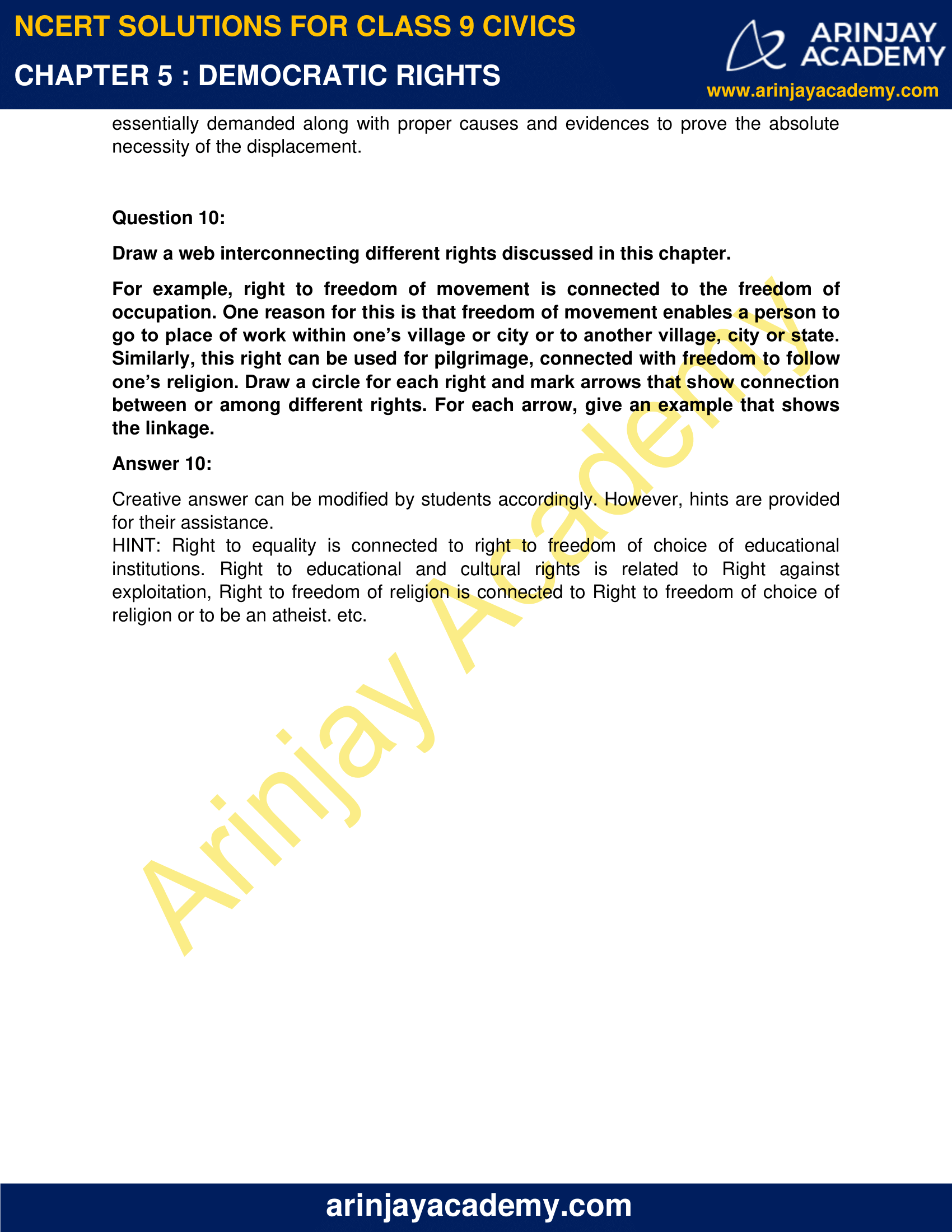 Which of the following is not an instance of an exercise of a fundamental right?

Which of the following freedoms is not available to an Indian citizen?

Which of the following rights is available under the Indian Constitution?

Option (c) i.e. right to protect one’s culture is available to the citizens under the Indian constitution.

Name the Fundamental Right under which each of the following rights falls:

Which of these statements about the relationship between democracy and rights is more valid? Give reasons for your preference.

Option (a) seems to be the valid one as for a nation to be democracy there are a number of parameters. However one of the most important parameters is that of providing its citizens with rights.

Are these restrictions on the right to freedom justified? Give reasons for your answer.

a) Indian citizens need permission to visit some border areas of the country for reasons of security.
b) Outsiders are not allowed to buy property in some areas to protect the interest of the local population.
c) The government bans the publication of a book that can go against the ruling party in the next elections.

a) Indian Constitution provides its citizens with a number of rights. However, it also puts a few restrictions to safeguard the interests of the minority or the backward classes. When a few Indian citizens need permission to visit some border areas of the country for security purposes then it is strictly in the interest of the people itself as in order to protect the people from harm these restrictions are being put. Hence it is totally justified.
b) The above case scenario is seen in controversial areas like Kashmir where in order to prevent the local interest of the people it is essential to stop outsiders from buying property as these local people are often exploited outside and their interests should be protected to make them feel safe. Hence it is justified. However, this cannot be the case everywhere and should be allowed for only special regions.
c) The above statement if stands out to be a case of defamation against any party be it ruling or not hurting the sentiments and reputation of the one in question then it is justified to stop the publication. However, if it is a trial of suppressing the voices and opinions of people then it is not justified as the fundamental right of freedom of speech and expression is provided by our constitution.

Manoj went to a college to apply for admission into an MBA course.

The clerk refused to take his application and said “You, the son of a sweeper, wish to be a manager! Has anyone done this job in your community? Go to the municipality office and apply for a sweeper’s position”. Which of Manoj’s fundamental rights are being violated in this instance? Spell these out in a letter from Manoj to the district collector.

This is a creative answer and students can do the needful themselves. However, hints are provided for their assistance:

HINTS: In the above case scenario Manoj’s right to equality as guaranteed by our constitution is violated. He is clearly being discriminated against because of his social and economic status and is deprived of his right to freedom of choice of his own profession.

When Madhurima went to the property registration office, the Registrar told her, “You can’t write your name as Madhurima Banerjee d/o A. K. Banerjee. You are married, so you must give your husband’s name. Your husband’s surname is Rao. So your name should be changed to Madhurima Rao.” She did not agree. She said “If my husband’s name has not changed after marriage, why should mine?” In your opinion who is right in this dispute? And why?

In the above case, Madhurima’s point seems to be justified as she should get the freedom of changing or not changing her surname after marriage according to her choice. Restricting her from using her old surname seems like a case of gender discrimination and restriction on freedom of choice. It should completely be her choice to change  her surname or not.

Thousands of tribals and other forest dwellers gathered at Piparia in Hoshangabad district in Madhya Pradesh to protest against their proposed displacement from the Satpura National Park, Bori Wildlife Sanctuary and Panchmarhi Wildlife Sanctuary. They argue that such a displacement is an attack on their livelihood and beliefs. Government claims that their displacement is essential for the development of the area and for protection of wildlife. Write a petition on behalf of the forest dwellers to the NHRC, a response from the government and a report of the NHRC on this matter.

Creative answer can be modified by students accordingly. However, hints are provided for their reference.

HINT: Displacing a community from one place to another is a violation of fundamental right to life under Article 21 of the Indian Constitution. However, it has also been said that if such displacement is essential for development purposes then the government can, provided the fact that some extra benefits and proper livelihoods are provided to the affected community as such displacement is for a greater good. So while drafting a petition on behalf of these dwellers it can be made a point that compensation is essentially demanded along with proper causes and evidences to prove the absolute necessity of the displacement.

Draw a web interconnecting different rights discussed in this chapter.

For example, right to freedom of movement is connected to the freedom of occupation. One reason for this is that freedom of movement enables a person to go to place of work within one’s village or city or to another village, city or state. Similarly, this right can be used for pilgrimage, connected with freedom to follow one’s religion. Draw a circle for each right and mark arrows that show connection between or among different rights. For each arrow, give an example that shows the linkage.

Creative answer can be modified by students accordingly. However, hints are provided for their assistance.

2. Rights in a Democracy

2.2 Why do we need rights in a democracy?

3. Rights in the Indian Constitution

3.4 Right to Freedom of Religion

3.6 How can we secure these rights? – Right to Constitutional Remedies

Dalit: It refers to a class of people who, for ages have been  considered to be untouchables because of their backward socio-economic status.

Covenant: When individuals, groups, or countries create undertakings to support a rule which is obligatory on the countersigners, then it can be termed as covenant.

Fundamental Rights: These are basic rights that are guaranteed by the constitution of a country to its citizens to enable them to live a safe, healthy and respectful life without getting exploited or suppressed by the power of the ruling parties.

Exploitation: It refers to the misuse or abuse of a particular individual, community, race, caste, sex etc. in order to make profits or just to practice discrimination for self-satisfaction.

PIL: PIL or public Interest litigation refers to a lawsuit undertaken to safeguard public interest at large by an individual or a group of members having a locus standi.