NCERT Solutions for Class 9 Civics Chapter 4 – Working of Institutions (Social Science), contains solutions to various questions in Exercise for Chapter 4.  At the end of the Solutions, all the keywords which are important to understand Working of Institutions Class 9 Civics, have been explained in a simple and easy to understand manner. We are providing NCERT Solutions for Class 9 all subjects which can be accessed by clicking here. 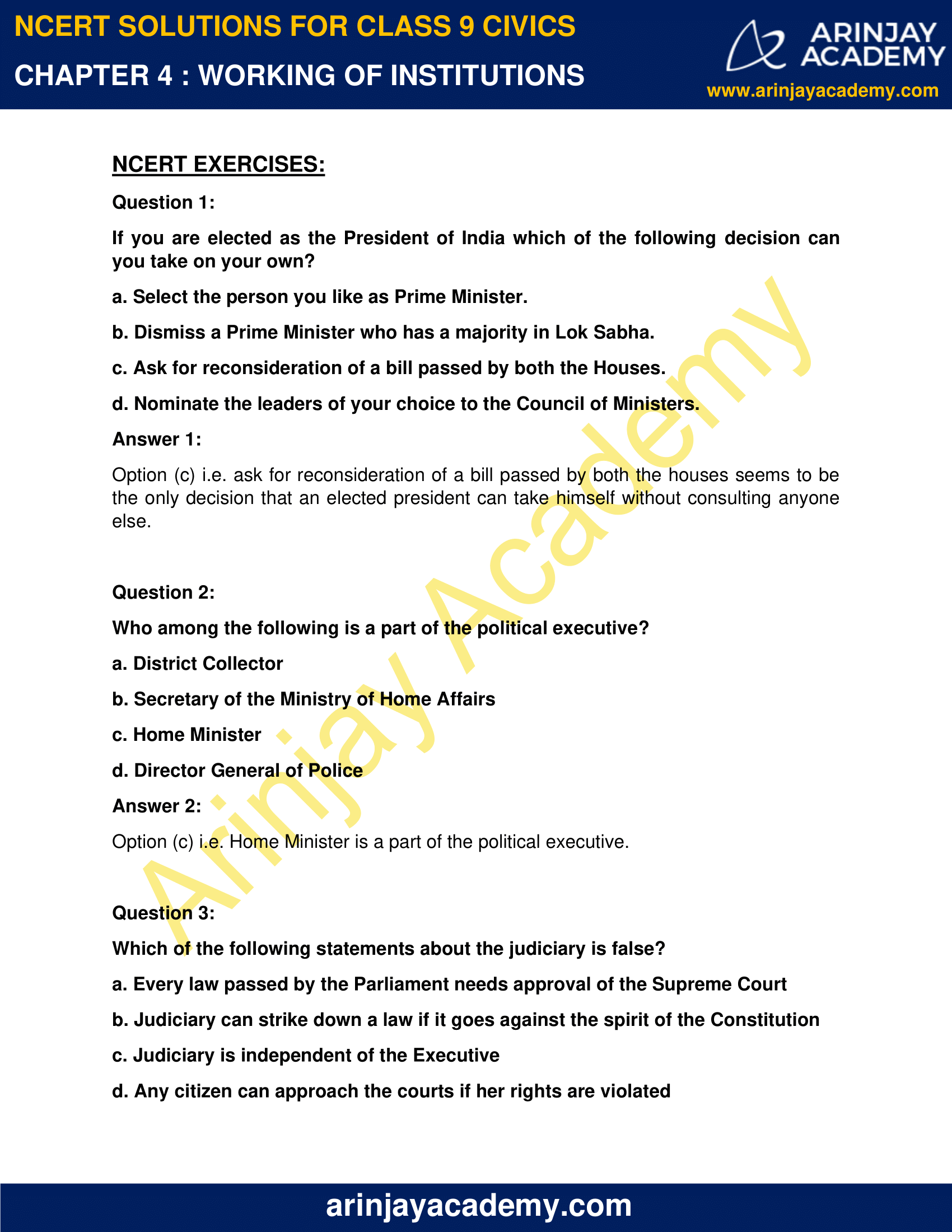 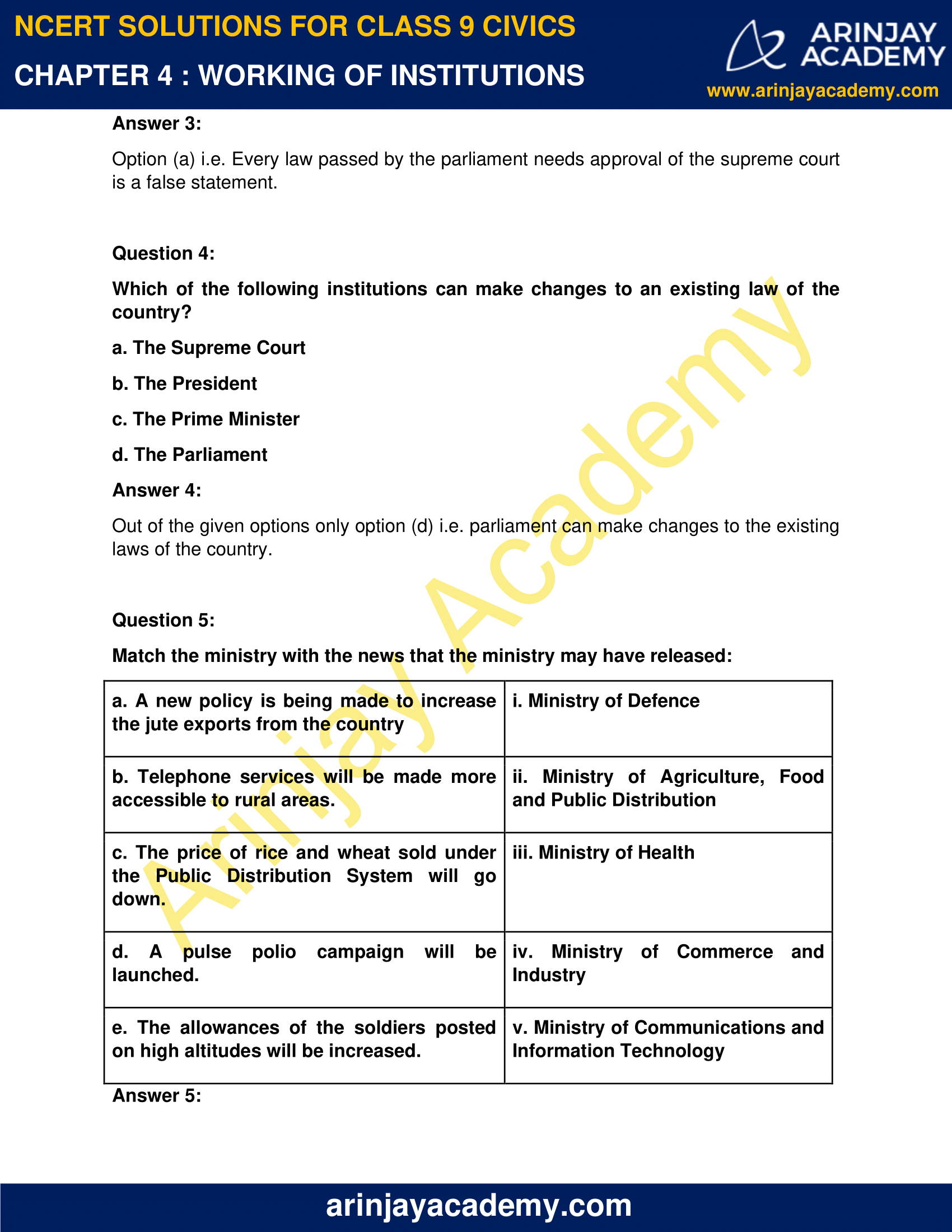 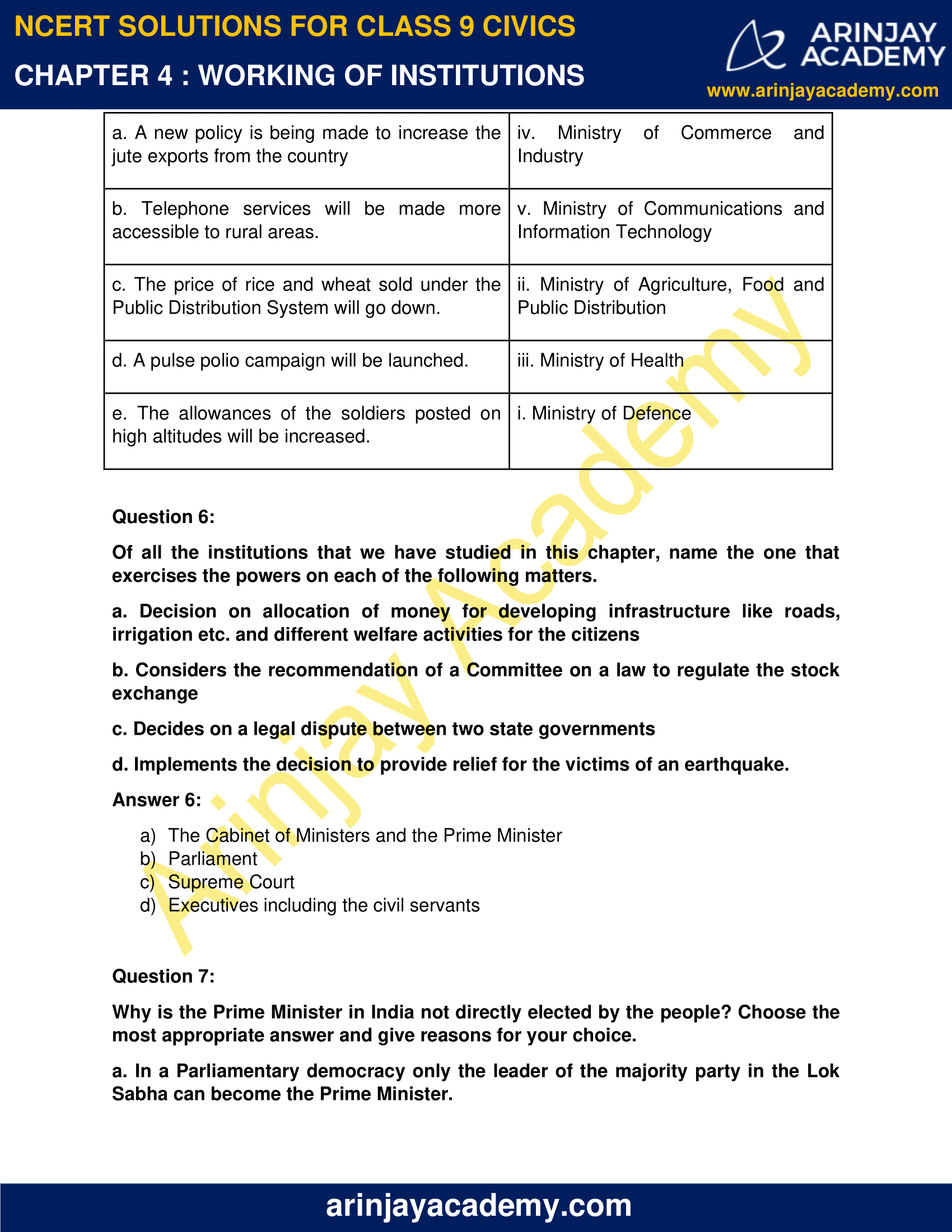 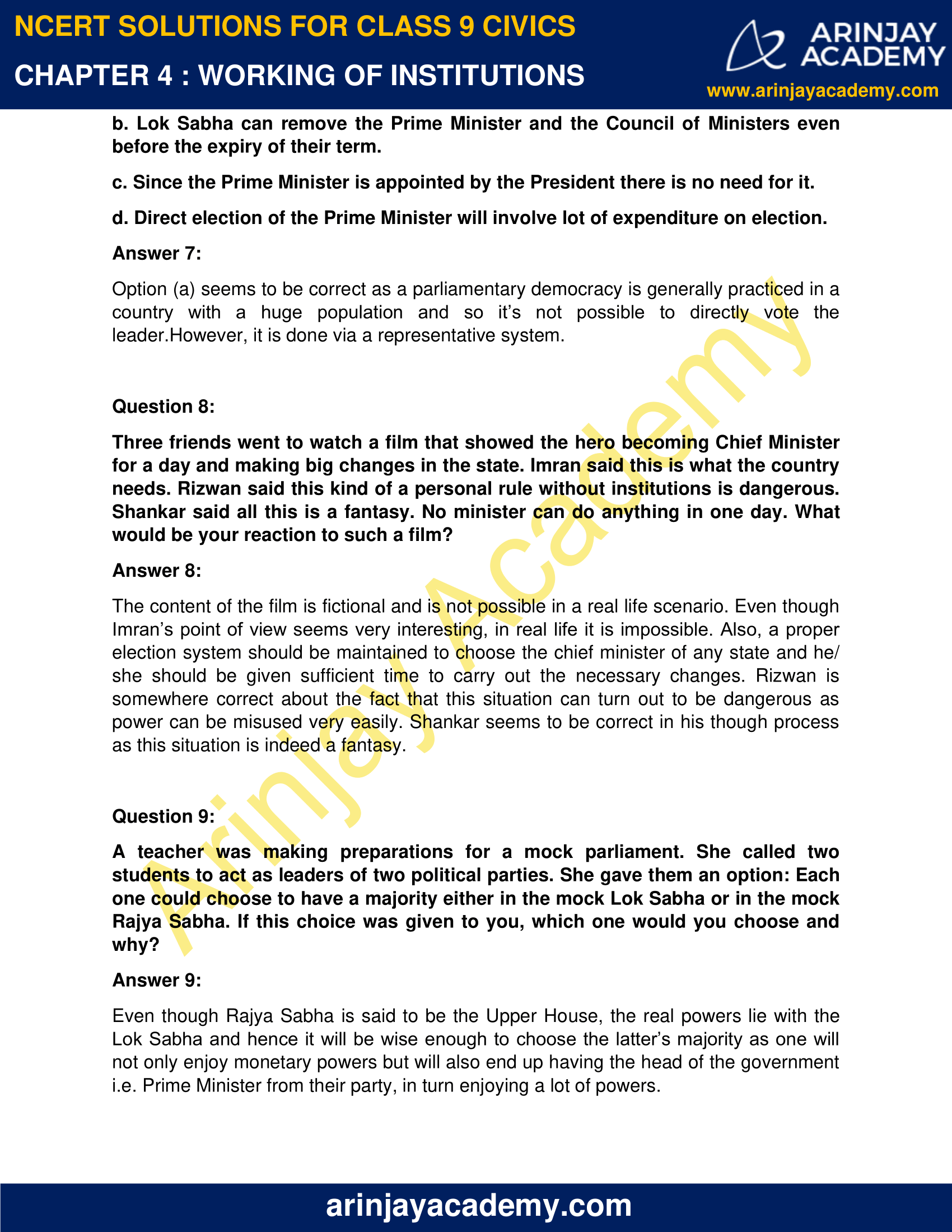 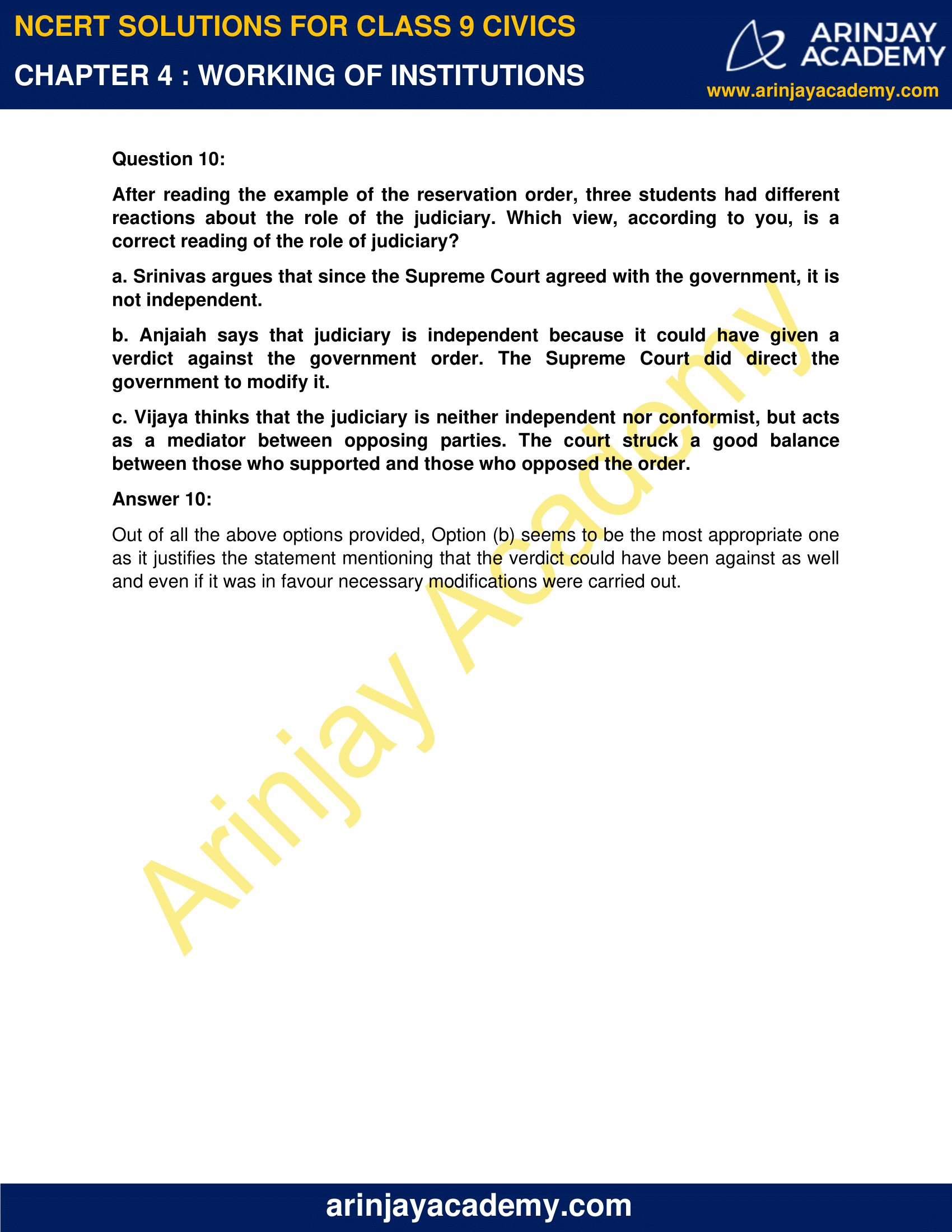 If you are elected as the President of India which of the following decision can you take on your own?

a) Select the person you like as Prime Minister.
b) Dismiss a Prime Minister who has a majority in Lok Sabha.
c) Ask for reconsideration of a bill passed by both the Houses.
d) Nominate the leaders of your choice to the Council of Ministers.

Option (c) i.e. ask for reconsideration of a bill passed by both the houses seems to be the only decision that an elected president can take himself without consulting anyone else.

Who among the following is a part of the political executive?

Option (c) i.e. Home Minister is a part of the political executive.

Which of the following statements about the judiciary is false?

Option (a) i.e. Every law passed by the parliament needs approval of the supreme court is a false statement.

Which of the following institutions can make changes to an existing law of the country?

Out of the given options only option (d) i.e. parliament can make changes to the existing laws of the country. 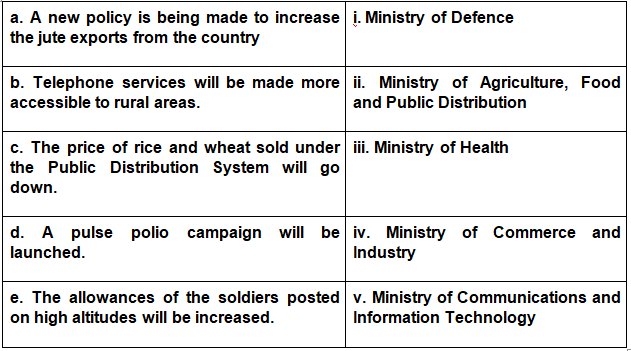 Of all the institutions that we have studied in this chapter, name the one that exercises the powers on each of the following matters.

a) Decision on allocation of money for developing infrastructure like roads, irrigation etc. and different welfare activities for the citizens
b) Considers the recommendation of a Committee on a law to regulate the stock exchange
c) Decides on a legal dispute between two state governments
d) Implements the decision to provide relief for the victims of an earthquake.

Why is the Prime Minister in India not directly elected by the people? Choose the most appropriate answer and give reasons for your choice.

Option (a) seems to be correct as a parliamentary democracy is generally practiced in a country with a huge population and so it’s not possible to directly vote the leader.However, it is done via a representative system.

Three friends went to watch a film that showed the hero becoming Chief Minister for a day and making big changes in the state. Imran said this is what the country needs. Rizwan said this kind of a personal rule without institutions is dangerous. Shankar said all this is a fantasy. No minister can do anything in one day. What would be your reaction to such a film?

The content of the film is fictional and is not possible in a real life scenario. Even though Imran’s point of view seems very interesting, in real life it is impossible. Also, a proper election system should be maintained to choose the chief minister of any state and he/ she should be given sufficient time to carry out the necessary changes. Rizwan is somewhere correct about the fact that this situation can turn out to be dangerous as power can be misused very easily. Shankar seems to be correct in his though process as this situation is indeed a fantasy.

A teacher was making preparations for a mock parliament. She called two students to act as leaders of two political parties. She gave them an option: Each one could choose to have a majority either in the mock Lok Sabha or in the mock Rajya Sabha. If this choice was given to you, which one would you choose and why?

Even though Rajya Sabha is said to be the Upper House, the real powers lie with the Lok Sabha and hence it will be wise enough to choose the latter’s majority as one will not only enjoy monetary powers but will also end up having the head of the government i.e. Prime Minister from their party, in turn enjoying a lot of powers.

After reading the example of the reservation order, three students had different reactions about the role of the judiciary. Which view, according to you, is a correct reading of the role of judiciary?

Out of all the above options provided, Option (b) seems to be the most appropriate one as it justifies the statement mentioning that the verdict could have been against as well and even if it was in favour necessary modifications were carried out.

3.2 Prime Minister and Council of Ministers

3.3 Power of the Prime Minister

No confidence motion: It is an indication that is passed by the members of the Lok Sabha to remove a government from power if it feels that the government is not working properly by passing this motion in the parliament.

Judiciary: It can be defined as the legal authorities of a country or the different levels of court of the motherland.

Appellate Jurisdiction: It refers to the court of appeal for the civil and criminal cases.

Coalition Government: When a particular political party is unable to form its government due to lesser number of votes received, it can align with other parties to form the majority and form the government to rule. This type of government is known as coalition government.

Memorandum: It is a written message or a document issued by an authority for some particular communication related to dogma or pronouncement of the government.