Download NCERT Solutions for Class 9 Civics Chapter 1 – What is Democracy? Why Democracy? 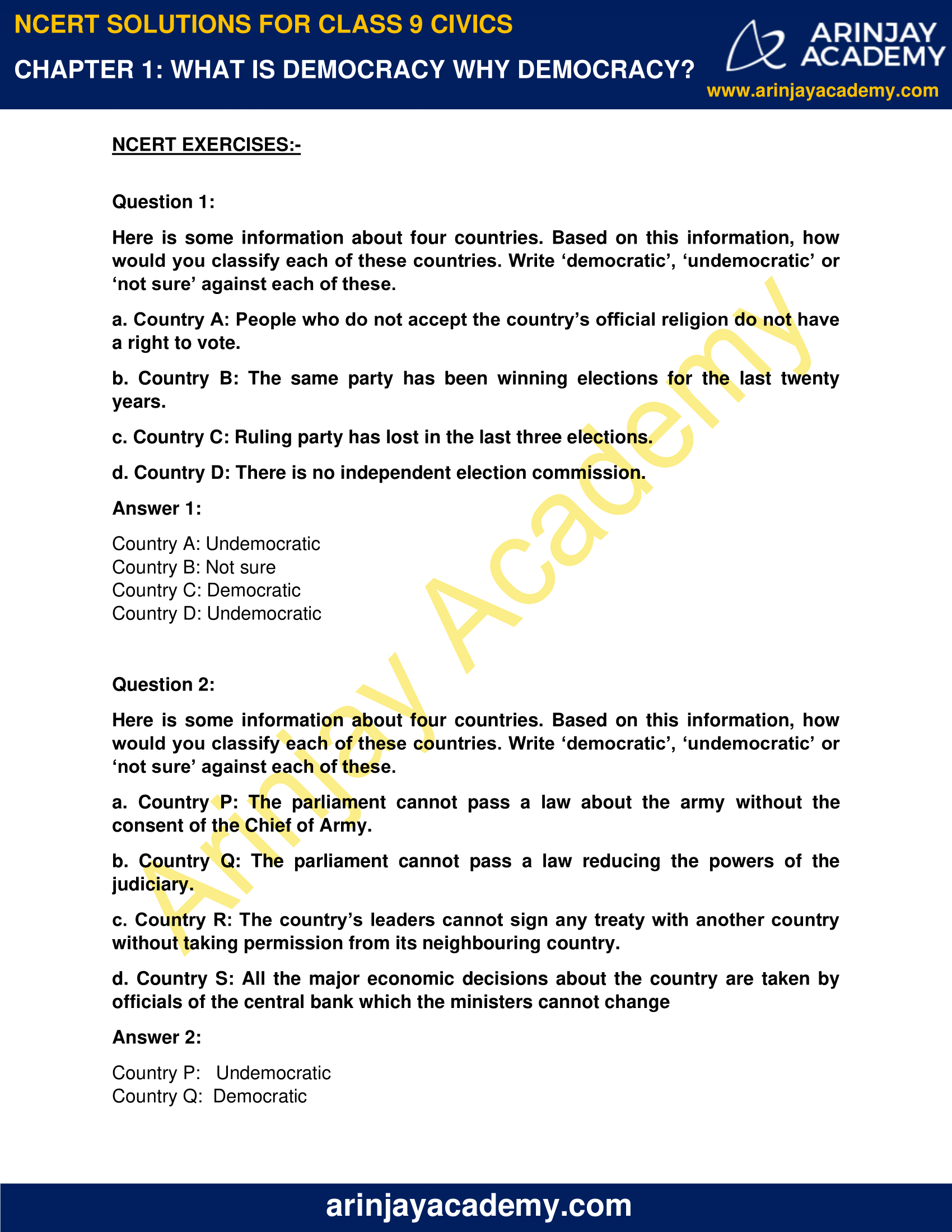 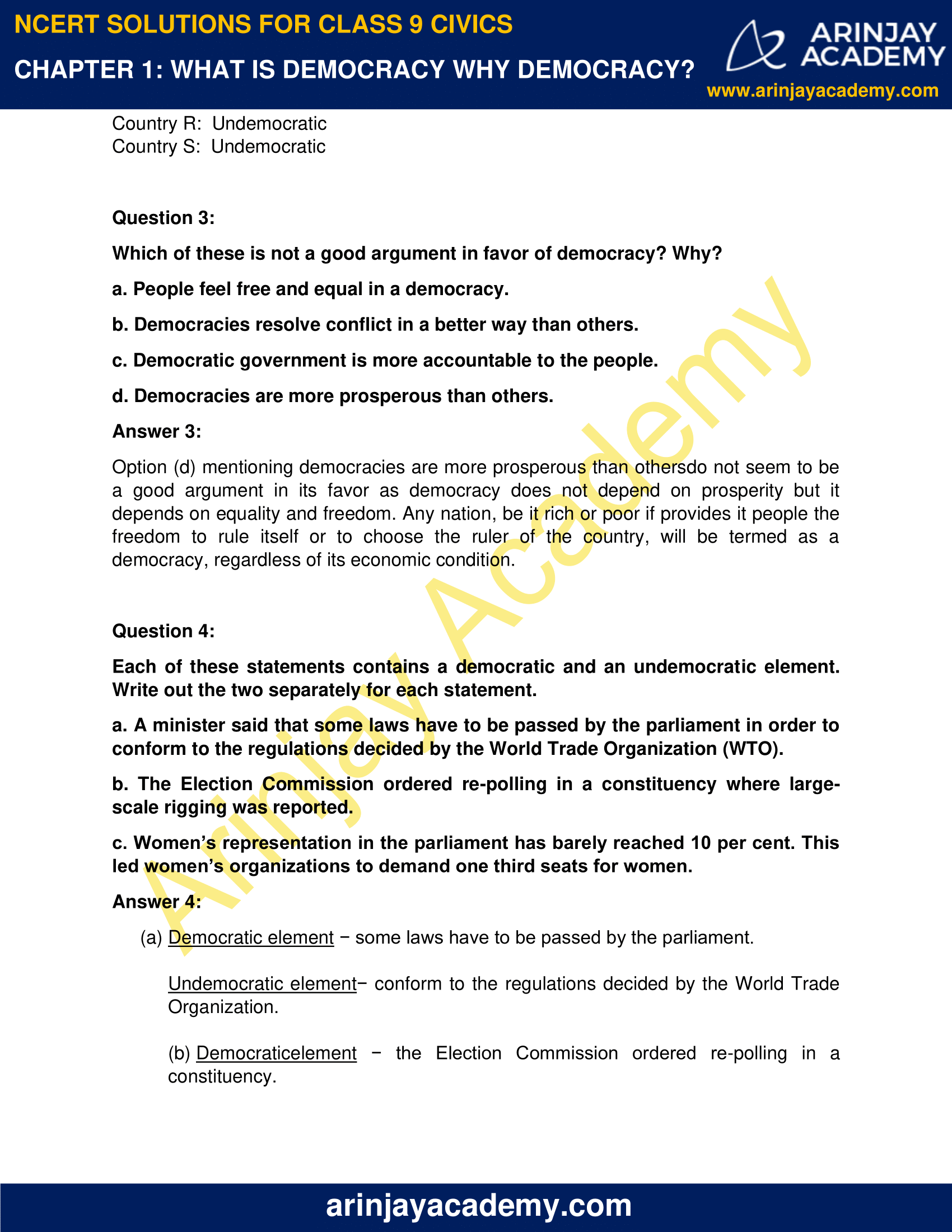 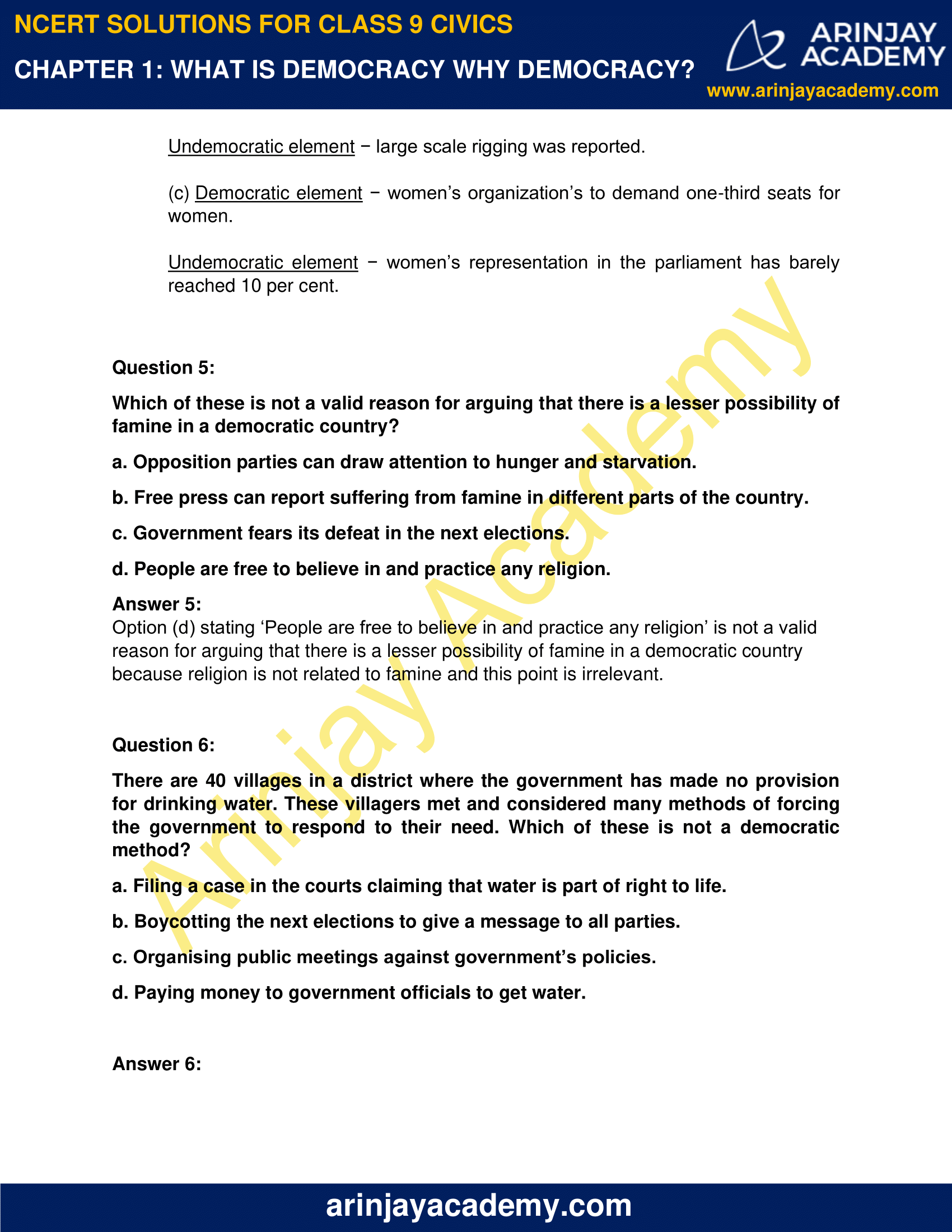 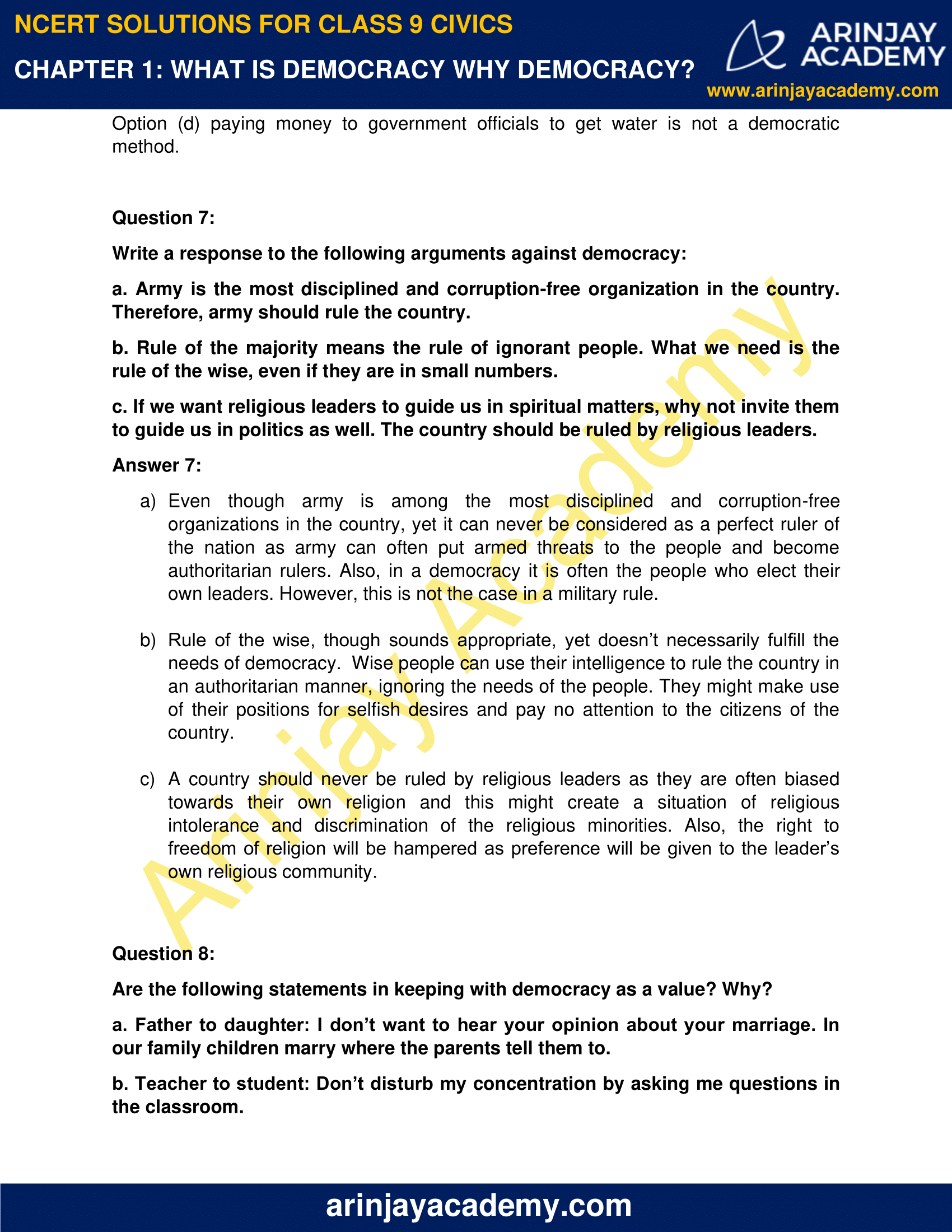 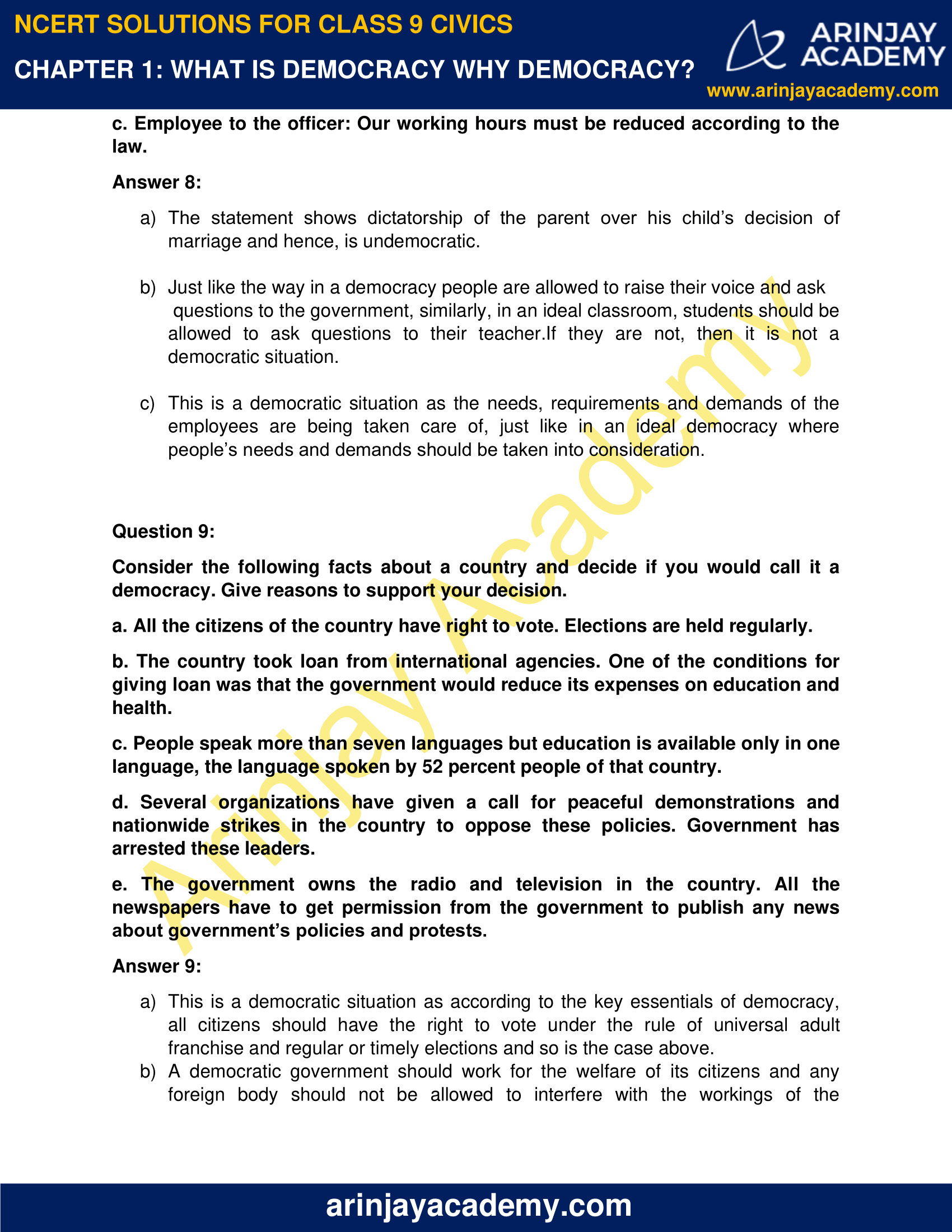 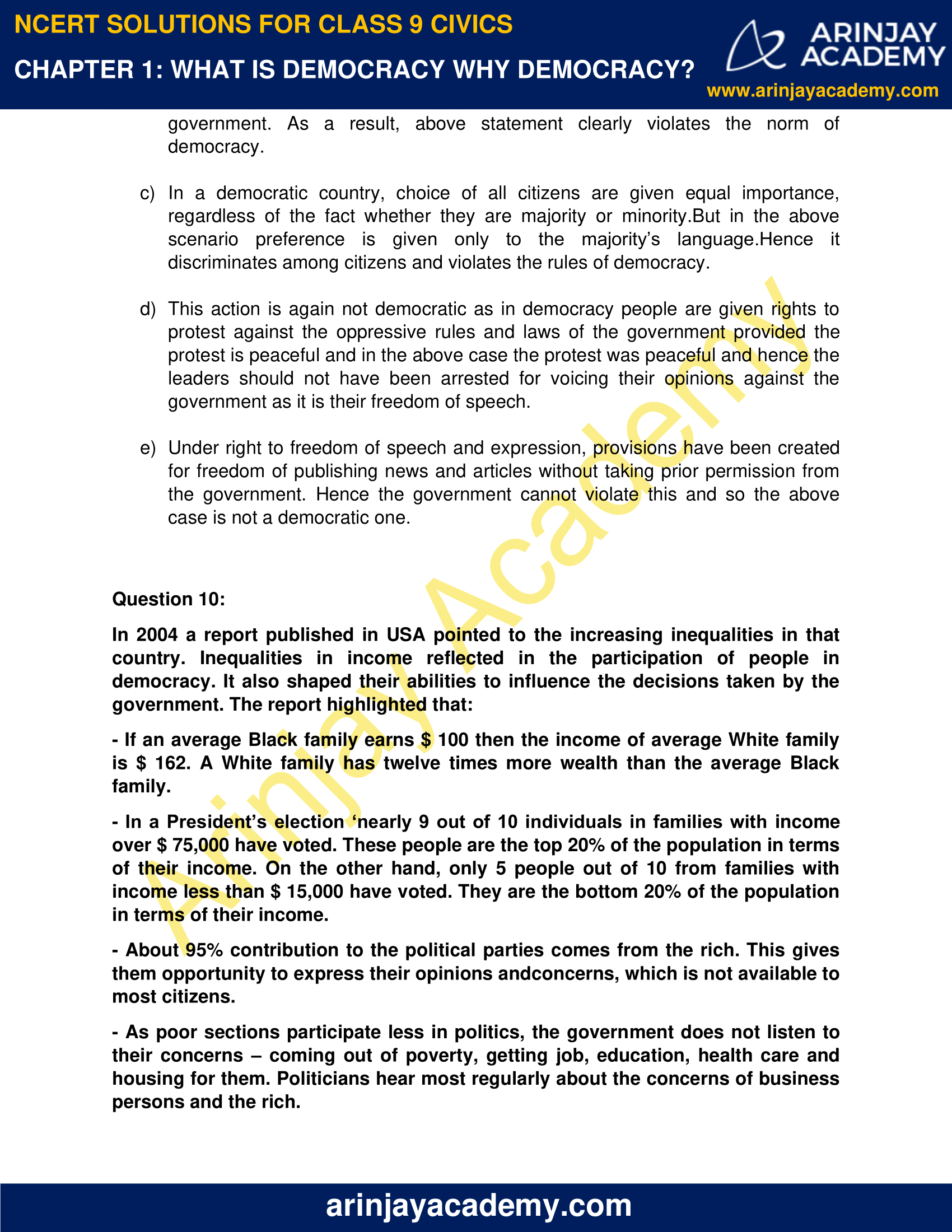 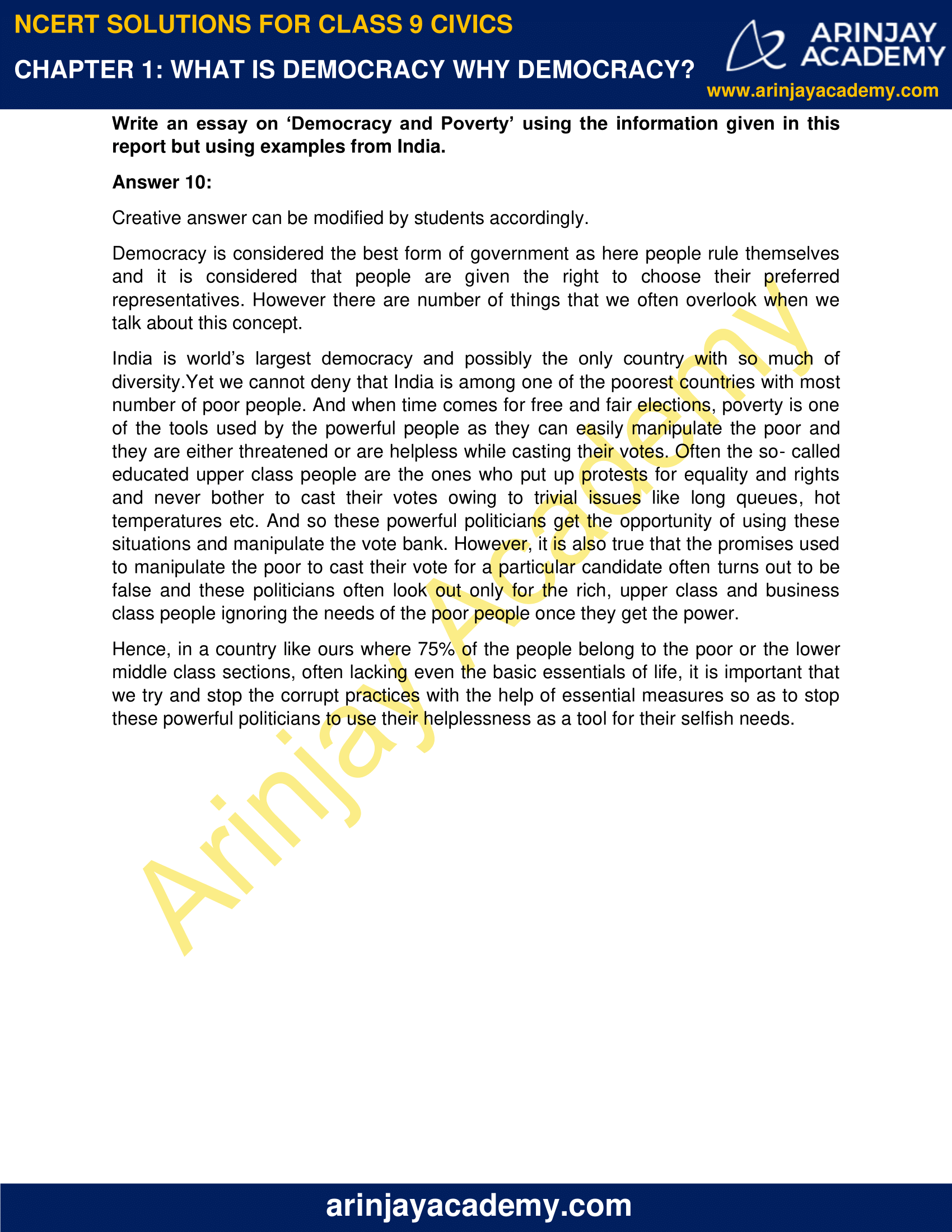 NCERT Solutions for Class 9 Civics Chapter 1 – What is Democracy? Why Democracy? – NCERT Exercises

a) Country A: People who do not accept the country’s official religion do not have a right to vote.
b) Country B: The same party has been winning elections for the last twenty years.
c) Country C: Ruling party has lost in the last three elections.
d) Country D: There is no independent election commission.

a) Country P: The parliament cannot pass a law about the army without the consent of the Chief of Army.

b) Country Q: The parliament cannot pass a law reducing the powers of the judiciary.

c) Country R: The country’s leaders cannot sign any treaty with another country without taking permission from its neighbouring country.

d) Country S: All the major economic decisions about the country are taken by officials of the central bank which the ministers cannot change

Which of these is not a good argument in favor of democracy? Why?

a) People feel free and equal in a democracy.
b) Democracies resolve conflict in a better way than others.
c) Democratic government is more accountable to the people.
d) Democracies are more prosperous than others.

Option (d) mentioning democracies are more prosperous than others do not seem to be a good argument in its favor as democracy does not depend on prosperity but it depends on equality and freedom. Any nation, be it rich or poor if provides it people the freedom to rule itself or to choose the ruler of the country, will be termed as a democracy, regardless of its economic condition.

Each of these statements contains a democratic and an undemocratic element. Write out the two separately for each statement.

(a) A minister said that some laws have to be passed by the parliament in order to conform to the regulations decided by the World Trade Organization (WTO).

(b) The Election Commission ordered re-polling in a constituency where large-scale rigging was reported.

(c) Women’s representation in the parliament has barely reached 10 per cent. This led women’s organizations to demand one third seats for women.

Which of these is not a valid reason for arguing that there is a lesser possibility of famine in a democratic country?

a) Opposition parties can draw attention to hunger and starvation.
b) Free press can report suffering from famine in different parts of the country.
c) Government fears its defeat in the next elections.
d) People are free to believe in and practice any religion.

Answer 5:
Option (d) stating ‘People are free to believe in and practice any religion’ is not a valid reason for arguing that there is a lesser possibility of famine in a democratic country because religion is not related to famine and this point is irrelevant.

There are 40 villages in a district where the government has made no provision for drinking water. These villagers met and considered many methods of forcing the government to respond to their need. Which of these is not a democratic method?

a) Filing a case in the courts claiming that water is part of right to life.
b) Boycotting the next elections to give a message to all parties.
c) Organising public meetings against government’s policies.
d) Paying money to government officials to get water.

Option (d) paying money to government officials to get water is not a democratic method.

Write a response to the following arguments against democracy:

a) Army is the most disciplined and corruption-free organization in the country. Therefore, army should rule the country.

a) Even though army is among the most disciplined and corruption-free organizations in the country, yet it can never be considered as a perfect ruler of the nation as army can often put armed threats to the people and become authoritarian rulers. Also, in a democracy it is often the people who elect their own leaders. However, this is not the case in a military rule.

b) Rule of the wise, though sounds appropriate, yet doesn’t necessarily fulfill the needs of democracy. Wise people can use their intelligence to rule the country in an authoritarian manner, ignoring the needs of the people. They might make use of their positions for selfish desires and pay no attention to the citizens of the country.

c) A country should never be ruled by religious leaders as they are often biased towards their own religion and this might create a situation of religious intolerance and discrimination of the religious minorities. Also, the right to freedom of religion will be hampered as preference will be given to the leader’s own religious community.

Are the following statements in keeping with democracy as a value? Why?

a) Father to daughter: I don’t want to hear your opinion about your marriage. In our family children marry where the parents tell them to.
b) Teacher to student: Don’t disturb my concentration by asking me questions in the classroom.
c) Employee to the officer: Our working hours must be reduced according to the law.

a) The statement shows dictatorship of the parent over his child’s decision of marriage and hence, is undemocratic.

c) This is a democratic situation as the needs, requirements and demands of the employees are being taken care of, just like in an ideal democracy where people’s needs and demands should be taken into consideration.

Consider the following facts about a country and decide if you would call it a democracy. Give reasons to support your decision.

a) All the citizens of the country have right to vote. Elections are held regularly.
b) The country took loan from international agencies. One of the conditions for giving loan was that the government would reduce its expenses on education and health.
c) People speak more than seven languages but education is available only in one language, the language spoken by 52 percent people of that country.
d) Several organizations have given a call for peaceful demonstrations and nationwide strikes in the country to oppose these policies. Government has arrested these leaders.
e) The government owns the radio and television in the country. All the newspapers have to get permission from the government to publish any news about government’s policies and protests.

a) This is a democratic situation as according to the key essentials of democracy, all citizens should have the right to vote under the rule of universal adult franchise and regular or timely elections and so is the case above.
b) A democratic government should work for the welfare of its citizens and any foreign body should not be allowed to interfere with the workings of the government. As a result, above statement clearly violates the norm of democracy.
c) In a democratic country, choice of all citizens are given equal importance, regardless of the fact whether they are majority or minority.But in the above scenario preference is given only to the majority’s language.Hence it discriminates among citizens and violates the rules of democracy.
d) This action is again not democratic as in democracy people are given rights to protest against the oppressive rules and laws of the government provided the protest is peaceful and in the above case the protest was peaceful and hence the leaders should not have been arrested for voicing their opinions against the government as it is their freedom of speech.
e) Under right to freedom of speech and expression, provisions have been created for freedom of publishing news and articles without taking prior permission from the government. Hence the government cannot violate this and so the above case is not a democratic one.

In 2004 a report published in USA pointed to the increasing inequalities in that country. Inequalities in income reflected in the participation of people in democracy. It also shaped their abilities to influence the decisions taken by the government. The report highlighted that:

– About 95% contribution to the political parties comes from the rich. This gives them opportunity to express their opinions and concerns, which is not available to most citizens.

– As poor sections participate less in politics, the government does not listen to their concerns – coming out of poverty, getting job, education, health care and housing for them. Politicians hear most regularly about the concerns of business persons and the rich.

Write an essay on ‘Democracy and Poverty’ using the information given in this report but using examples from India.

Democracy is considered the best form of government as here people rule themselves and it is considered that people are given the right to choose their preferred representatives. However there are number of things that we often overlook when we talk about this concept.

India is world’s largest democracy and possibly the only country with so much of diversity.Yet we cannot deny that India is among one of the poorest countries with most number of poor people. And when time comes for free and fair elections, poverty is one of the tools used by the powerful people as they can easily manipulate the poor and they are either threatened or are helpless while casting their votes. Often the so- called educated upper class people are the ones who put up protests for equality and rights and never bother to cast their votes owing to trivial issues like long queues, hot temperatures etc. And so these powerful politicians get the opportunity of using these situations and manipulate the vote bank. However, it is also true that the promises used to manipulate the poor to cast their vote for a particular candidate often turns out to be false and these politicians often look out only for the rich, upper class and business class people ignoring the needs of the poor people once they get the power.

Hence, in a country like ours where 75% of the people belong to the poor or the lower middle class sections, often lacking even the basic essentials of life, it is important that we try and stop the corrupt practices with the help of essential measures so as to stop these powerful politicians to use their helplessness as a tool for their selfish needs.

Topics Covered in Chapter 1 – What is Democracy? Why Democracy? Class 9 Civics (Social Science)

2.3 One person, one vote, one value one value

Important Terms Relevant for NCERT Solutions for Class 9 Civics Chapter 1 – What is Democracy? Why Democracy?

Military Coup: When a democratically elected government is thrown out of power by force and military leaders start ruling a country, it is termed as military coup.

Referendum: A referendum is a straight and universal vote in which a complete electorate is invited to vote on a specific suggestion.

Universal Adult Franchise: When all adults in the country above the age of 18 are allowed to vote without any discrimination on the basis of class caste religion sex etc. then it can be termed as universal adult franchise.

Dictatorship: A dictatorship is a form of government where a single leader or a group of leaders, rule in an authoritarian way i.e. according to their own whims and fancies.

Monarchy: When a country or state is ruled by kings or queens then the particular state can be said to be under monarchy rule.