NCERT Solutions for Class 9 Civics Chapter 3 – Electoral Politics (Social Science), contains solutions to various questions in Exercise for Chapter 3.  At the end of the Solutions, all the keywords which are important to understand Electoral Politics Class 9 Civics, have been explained in a simple and easy to understand manner. We are providing NCERT Solutions for Class 9 all subjects which can be accessed by clicking here. 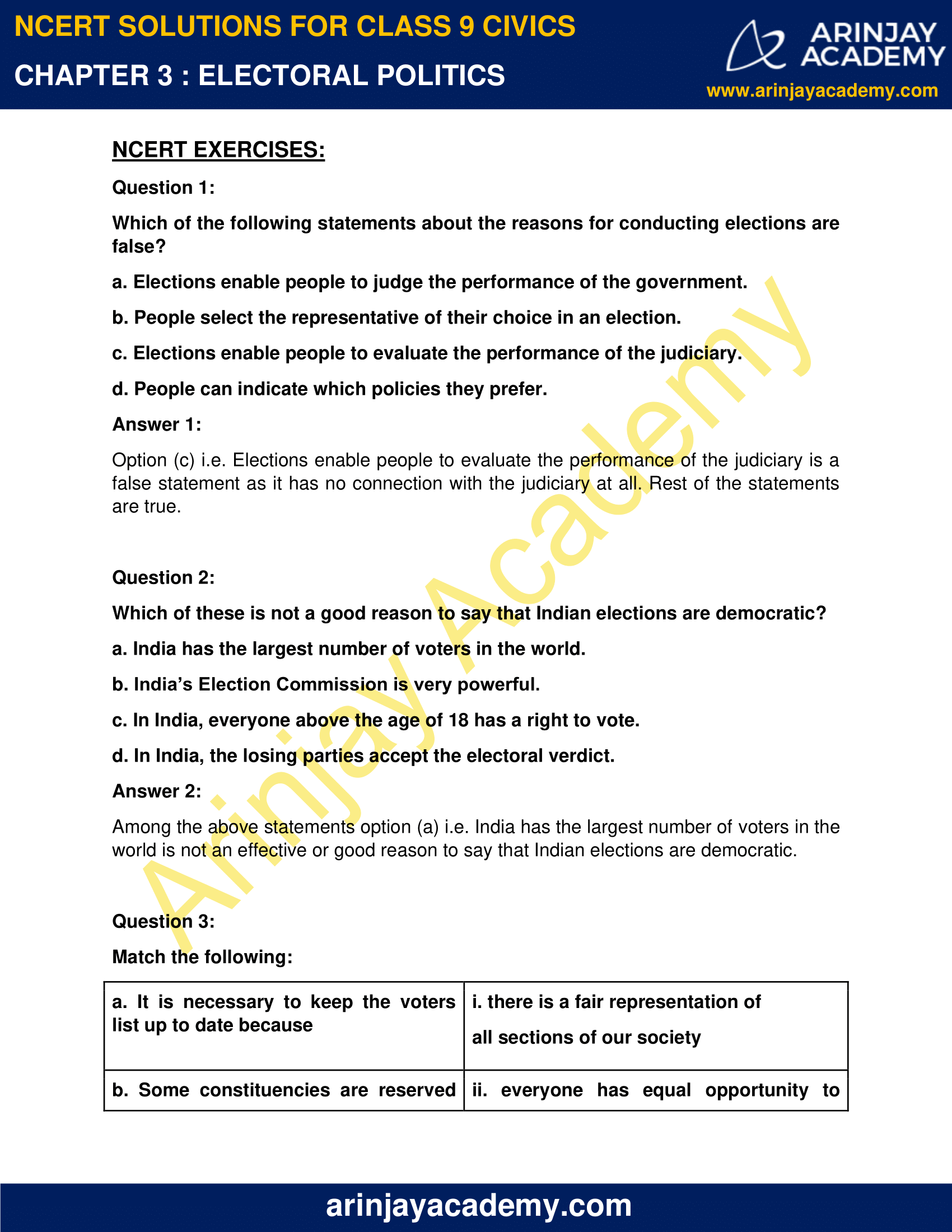 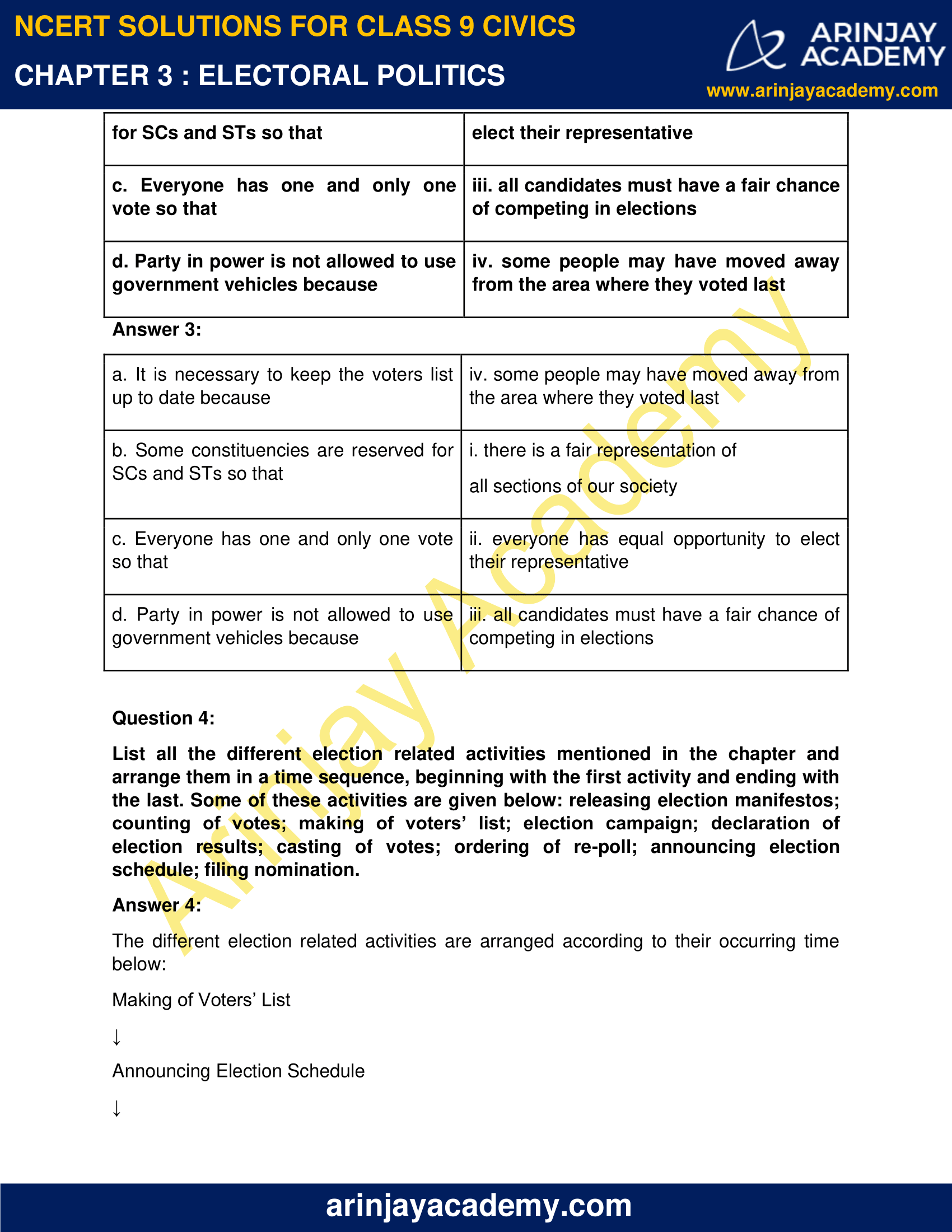 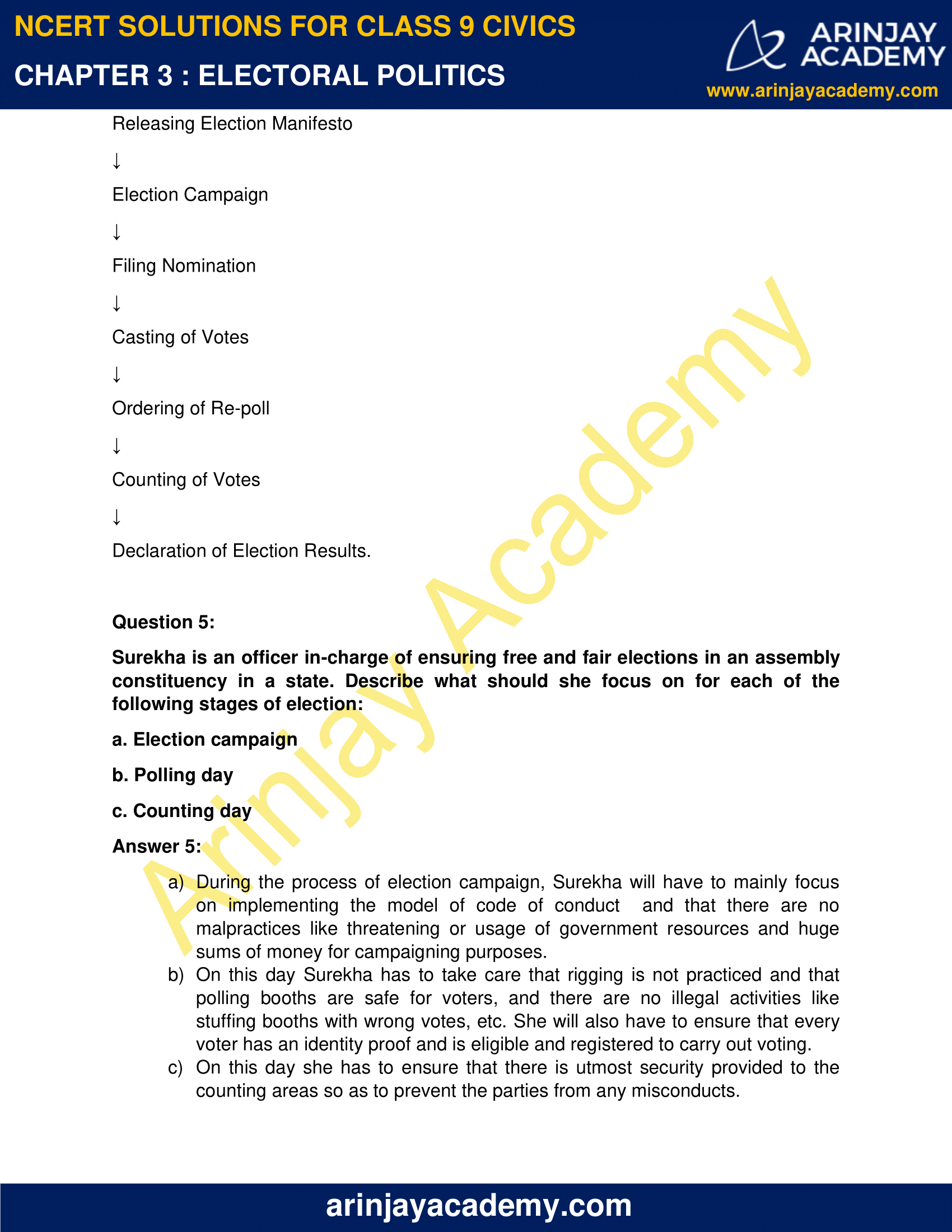 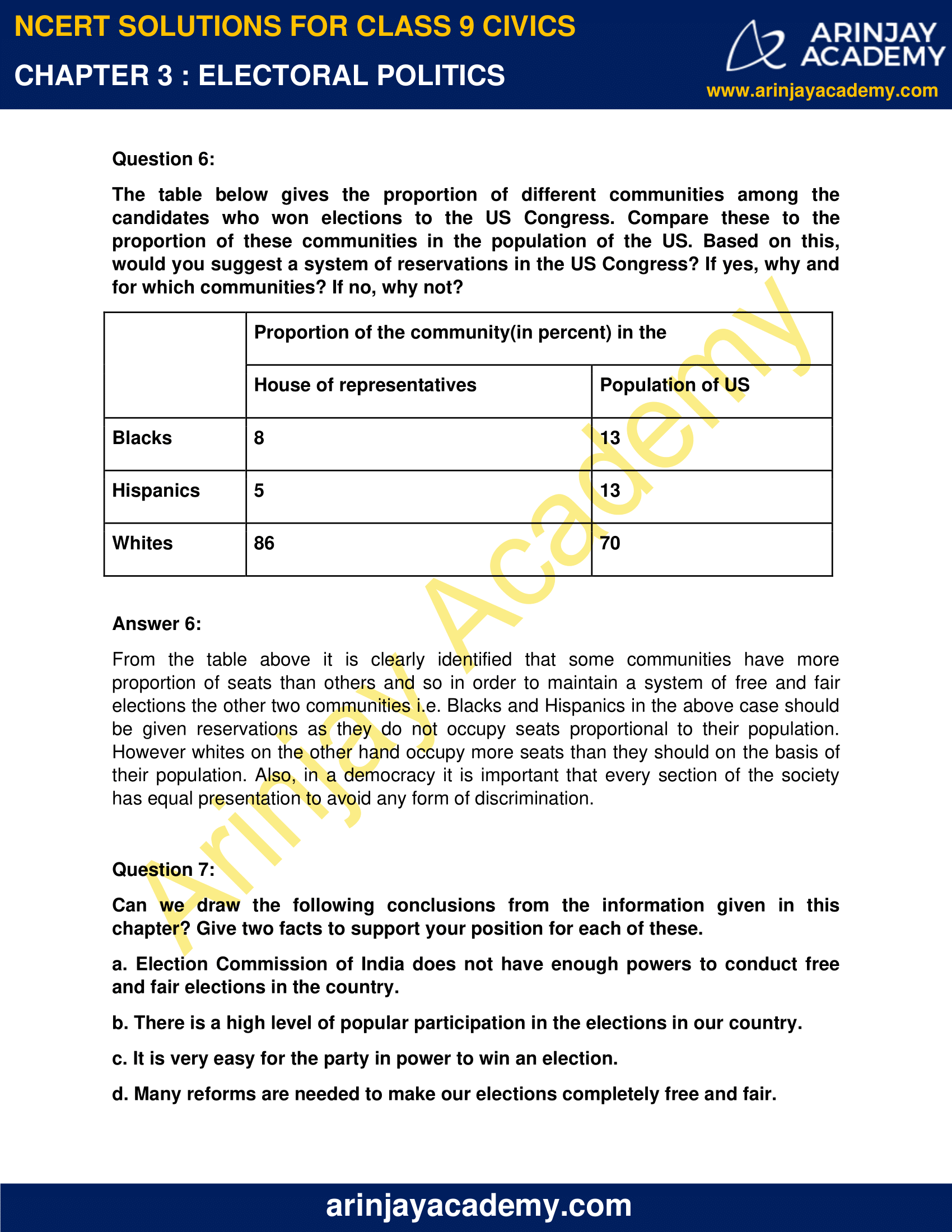 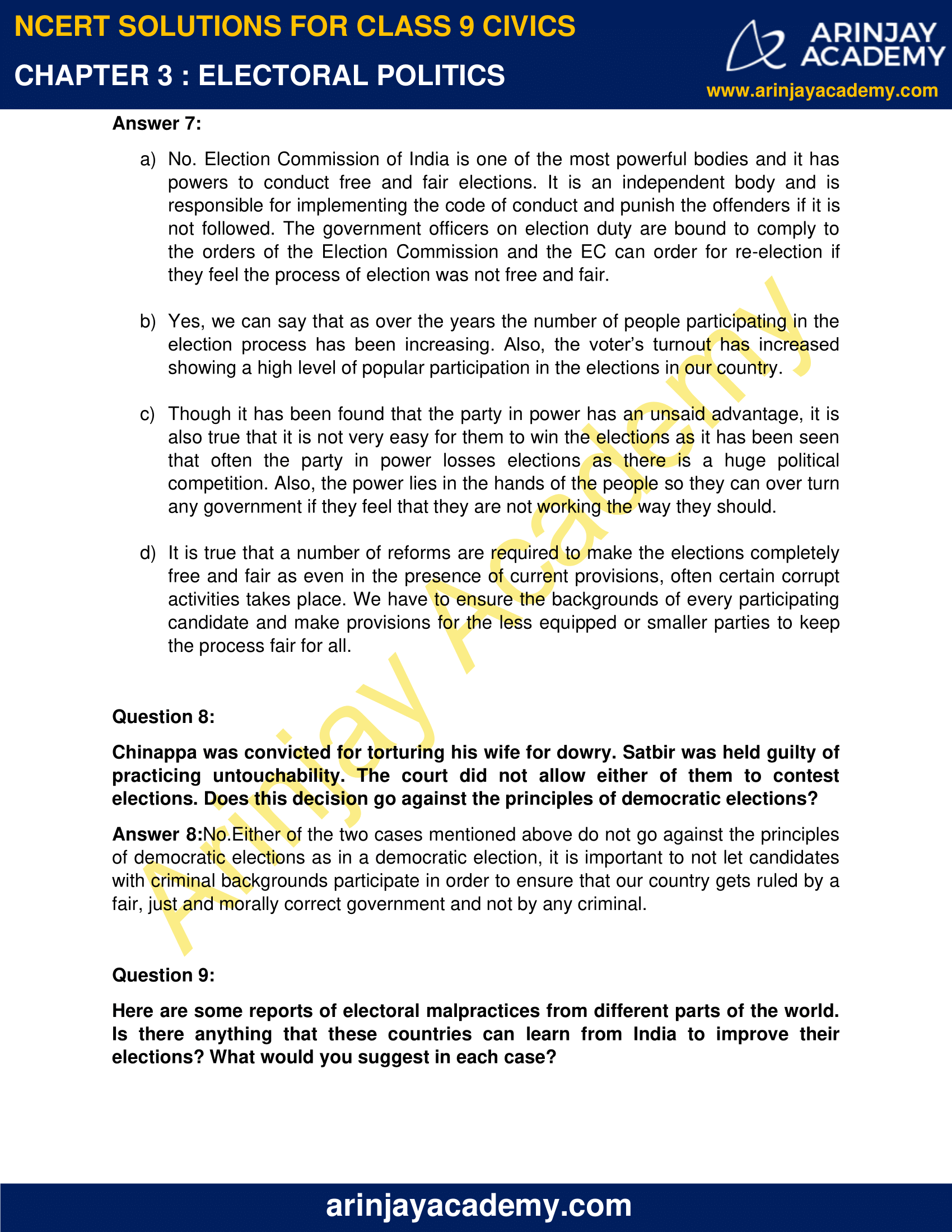 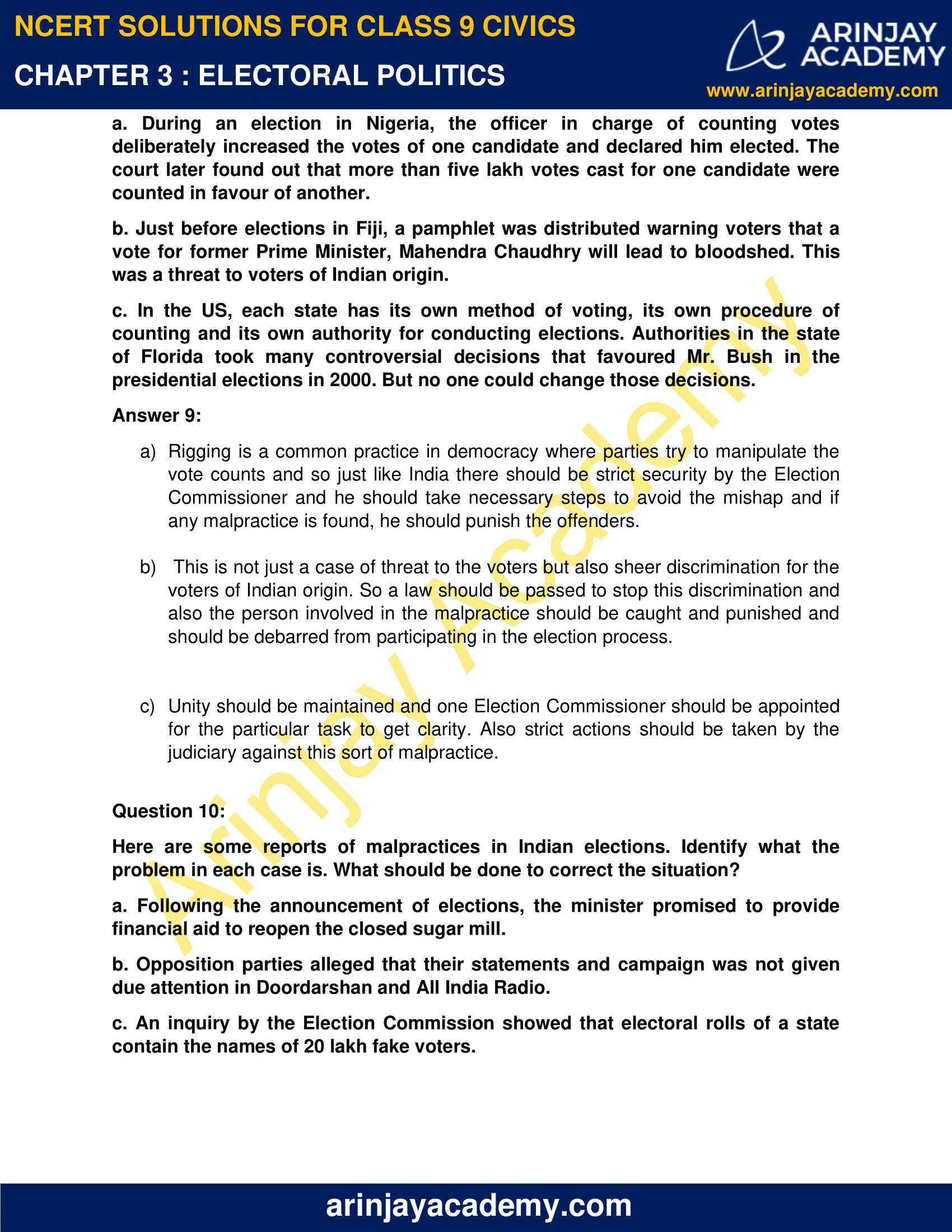 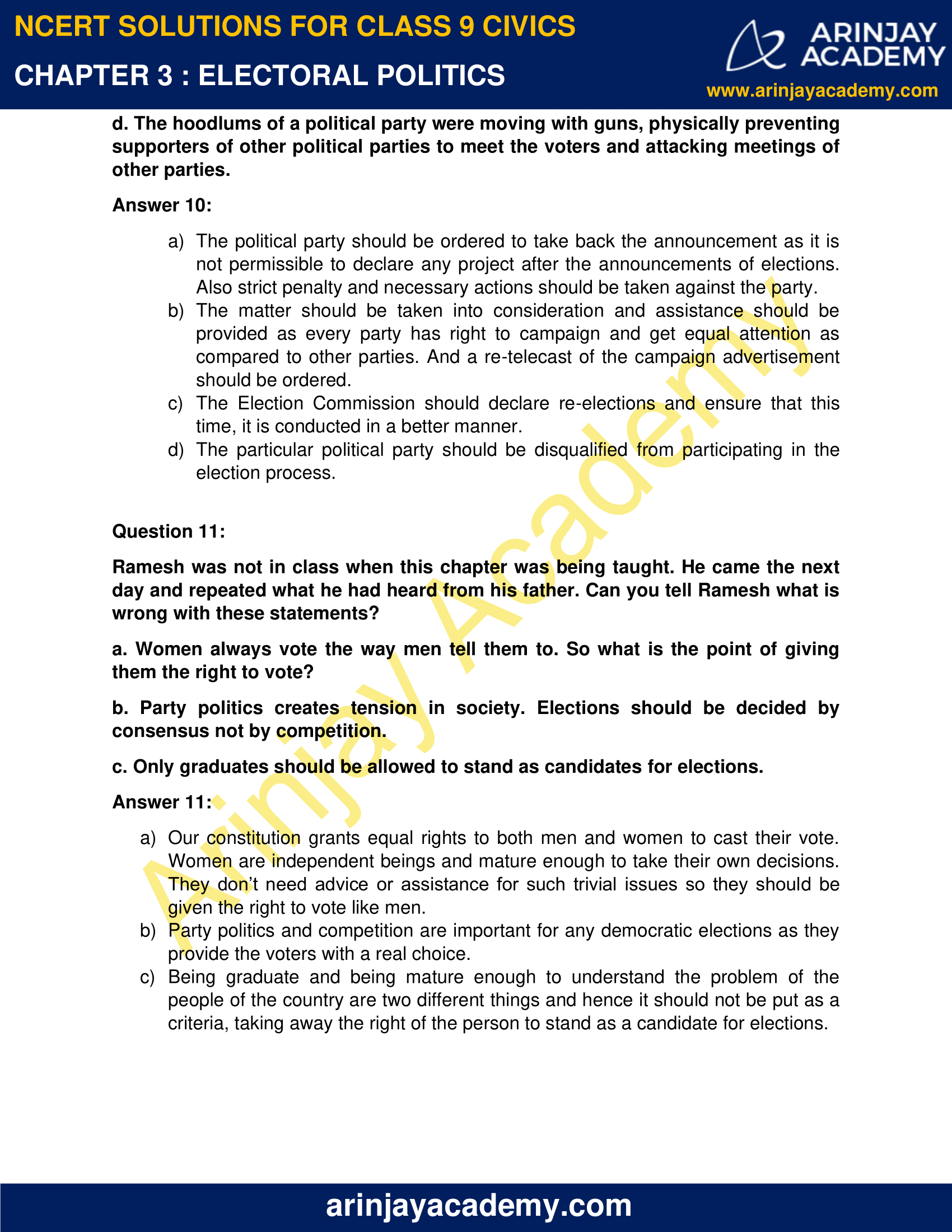 Which of the following statements about the reasons for conducting elections are false?

Option (c) i.e. Elections enable people to evaluate the performance of the judiciary is a false statement as it has no connection with the judiciary at all. Rest of the statements are true.

Which of these is not a good reason to say that Indian elections are democratic?

a) India has the largest number of voters in the world.
b) India’s Election Commission is very powerful.
c) In India, everyone above the age of 18 has a right to vote.
d) In India, the losing parties accept the electoral verdict.

Among the above statements option (a) i.e. India has the largest number of voters in the world is not an effective or good reason to say that Indian elections are democratic.

The different election related activities are arranged according to their occurring time below:

Surekha is an officer in-charge of ensuring free and fair elections in an assembly constituency in a state. Describe what should she focus on for each of the following stages of election:

a) During the process of election campaign, Surekha will have to mainly focus on implementing the model of code of conduct and that there are no malpractices like threatening or usage of government resources and huge sums of money for campaigning purposes.

b) On this day Surekha has to take care that rigging is not practiced and that polling booths are safe for voters, and there are no illegal activities like stuffing booths with wrong votes, etc. She will also have to ensure that every voter has an identity proof and is eligible and registered to carry out voting.

c) On this day she has to ensure that there is utmost security provided to the counting areas so as to prevent the parties from any misconducts.

From the table above it is clearly identified that some communities have more proportion of seats than others and so in order to maintain a system of free and fair elections the other two communities i.e. Blacks and Hispanics in the above case should be given reservations as they do not occupy seats proportional to their population. However whites on the other hand occupy more seats than they should on the basis of their population. Also, in a democracy it is important that every section of the society has equal presentation to avoid any form of discrimination.

Can we draw the following conclusions from the information given in this chapter? Give two facts to support your position for each of these.

a) Election Commission of India does not have enough powers to conduct free and fair elections in the country.
b) There is a high level of popular participation in the elections in our country.
c) It is very easy for the party in power to win an election.
d) Many reforms are needed to make our elections completely free and fair.

a) No. Election Commission of India is one of the most powerful bodies and it has powers to conduct free and fair elections. It is an independent body and is responsible for implementing the code of conduct and punish the offenders if it is not followed. The government officers on election duty are bound to comply to the orders of the Election Commission and the EC can order for re-election if they feel the process of election was not free and fair.

b) Yes, we can say that as over the years the number of people participating in the election process has been increasing. Also, the voter’s turnout has increased showing a high level of popular participation in the elections in our country.

c) Though it has been found that the party in power has an unsaid advantage, it is also true that it is not very easy for them to win the elections as it has been seen that often the party in power losses elections as there is a huge political competition. Also, the power lies in the hands of the people so they can over turn any government if they feel that they are not working the way they should.

d) It is true that a number of reforms are required to make the elections completely free and fair as even in the presence of current provisions, often certain corrupt activities takes place. We have to ensure the backgrounds of every participating candidate and make provisions for the less equipped or smaller parties to keep the process fair for all.

Chinappa was convicted for torturing his wife for dowry. Satbir was held guilty of practicing untouchability. The court did not allow either of them to contest elections. Does this decision go against the principles of democratic elections?

Answer 8:No.Either of the two cases mentioned above do not go against the principles of democratic elections as in a democratic election, it is important to not let candidates with criminal backgrounds participate in order to ensure that our country gets ruled by a fair, just and morally correct government and not by any criminal.

Here are some reports of electoral malpractices from different parts of the world. Is there anything that these countries can learn from India to improve their elections? What would you suggest in each case?

a) During an election in Nigeria, the officer in charge of counting votes deliberately increased the votes of one candidate and declared him elected. The court later found out that more than five lakh votes cast for one candidate were counted in favour of another.

b) Just before elections in Fiji, a pamphlet was distributed warning voters that a vote for former Prime Minister, Mahendra Chaudhry will lead to bloodshed. This was a threat to voters of Indian origin.

c) In the US, each state has its own method of voting, its own procedure of counting and its own authority for conducting elections. Authorities in the state of Florida took many controversial decisions that favoured Mr. Bush in the presidential elections in 2000. But no one could change those decisions.

a) Rigging is a common practice in democracy where parties try to manipulate the vote counts and so just like India there should be strict security by the Election Commissioner and he should take necessary steps to avoid the mishap and if any malpractice is found, he should punish the offenders.

b) This is not just a case of threat to the voters but also sheer discrimination for the voters of Indian origin. So a law should be passed to stop this discrimination and also the person involved in the malpractice should be caught and punished and should be debarred from participating in the election process.

c) Unity should be maintained and one Election Commissioner should be appointed for the particular task to get clarity. Also strict actions should be taken by the judiciary against this sort of malpractice.

Here are some reports of malpractices in Indian elections. Identify what the problem in each case is. What should be done to correct the situation?

a) Following the announcement of elections, the minister promised to provide financial aid to reopen the closed sugar mill.
b) Opposition parties alleged that their statements and campaign was not given due attention in Doordarshan and All India Radio.
c) An inquiry by the Election Commission showed that electoral rolls of a state contain the names of 20 lakh fake voters.
d) The hoodlums of a political party were moving with guns, physically preventing supporters of other political parties to meet the voters and attacking meetings of other parties.

a) The political party should be ordered to take back the announcement as it is not permissible to declare any project after the announcements of elections. Also strict penalty and necessary actions should be taken against the party.

b) The matter should be taken into consideration and assistance should be provided as every party has right to campaign and get equal attention as compared to other parties. And a re-telecast of the campaign advertisement should be ordered.

c) The Election Commission should declare re-elections and ensure that this time, it is conducted in a better manner.

d) The particular political party should be disqualified from participating in the election process.

Ramesh was not in class when this chapter was being taught. He came the next day and repeated what he had heard from his father. Can you tell Ramesh what is wrong with these statements?

a) Women always vote the way men tell them to. So what is the point of giving them the right to vote?

b) Party politics creates tension in society. Elections should be decided by consensus not by competition.

c) Only graduates should be allowed to stand as candidates for elections.

a) Our constitution grants equal rights to both men and women to cast their vote. Women are independent beings and mature enough to take their own decisions. They don’t need advice or assistance for such trivial issues so they should be given the right to vote like men.

b) Party politics and competition are important for any democratic elections as they provide the voters with a real choice.

c) Being graduate and being mature enough to understand the problem of the people of the country are two different things and hence it should not be put as a criteria, taking away the right of the person to stand as a candidate for elections.

1.3 What makes an election democratic?

1.4 Is it good to have political competition?

2. What is Our System of Elections?

2.6 Polling and counting of votes

3. What Makes Elections In India Democratic?

3.4 Challenges to free and fair elections

Constituency: The term constituency refers to an assembly of voters in an identified area who elect a representative to a legislative body.

Incumbent: It refers to the choice for the people voting, rendering between members of current party and power and that of opposition party.

Turnout: It refers to the total number or percentage of voters who actually voted and were eligible to do so.

Election Campaign: When different parties before elections makes appeal to people using different ways to get elected and become the ruling party then it can be termed as election campaign.

Nomination: The act of choosing one-person party or leader over the another for a particular purpose can be termed as nomination.