NCERT Solutions for Class 9 Civics Chapter 2 – Constitutional Design (Social Science), contains solutions to various questions in Exercise for Chapter 2.  At the end of the Solutions, all the keywords which are important to understand Constitutional Design Class 9 Civics, have been explained in a simple and easy to understand manner. We are providing NCERT Solutions for Class 9 all subjects which can be accessed by clicking here. 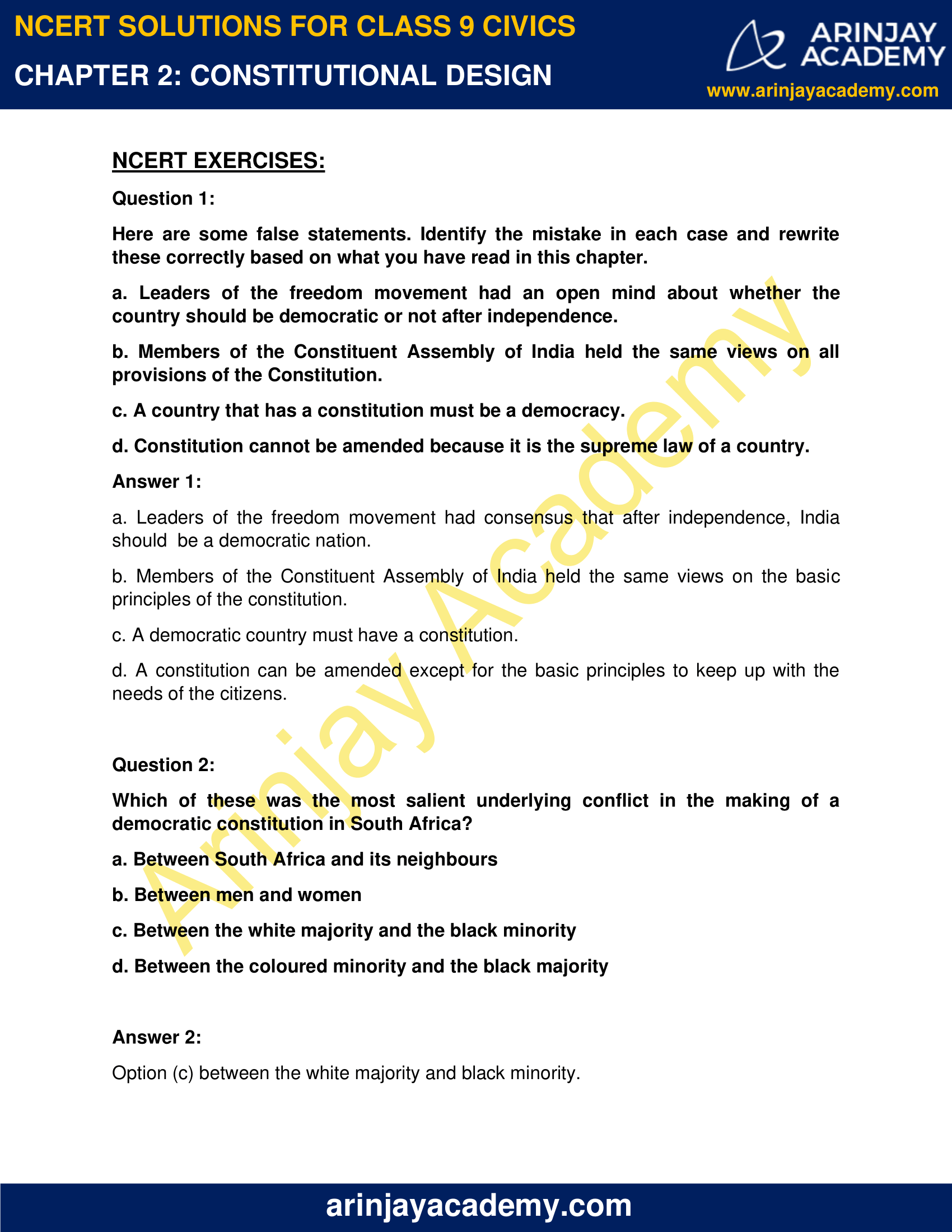 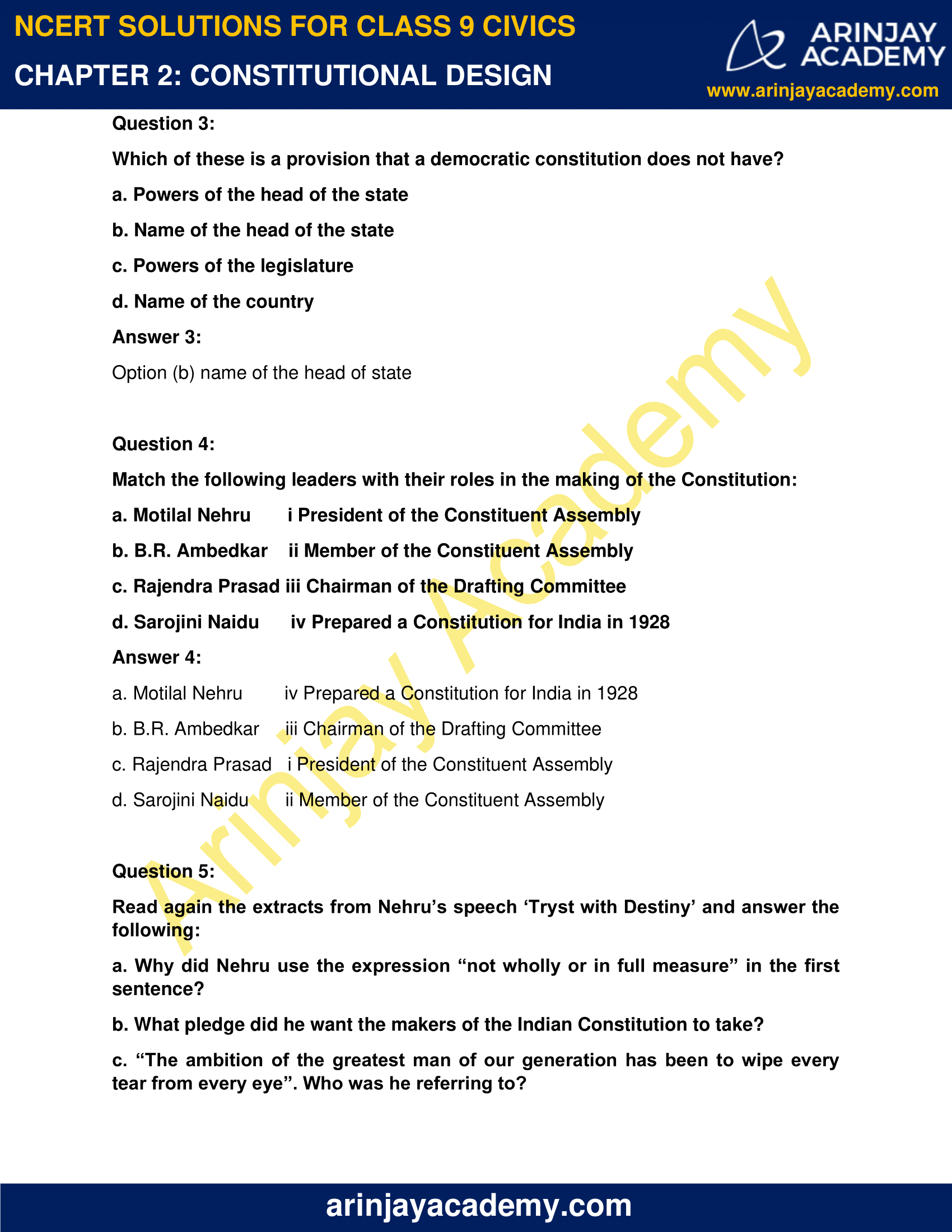 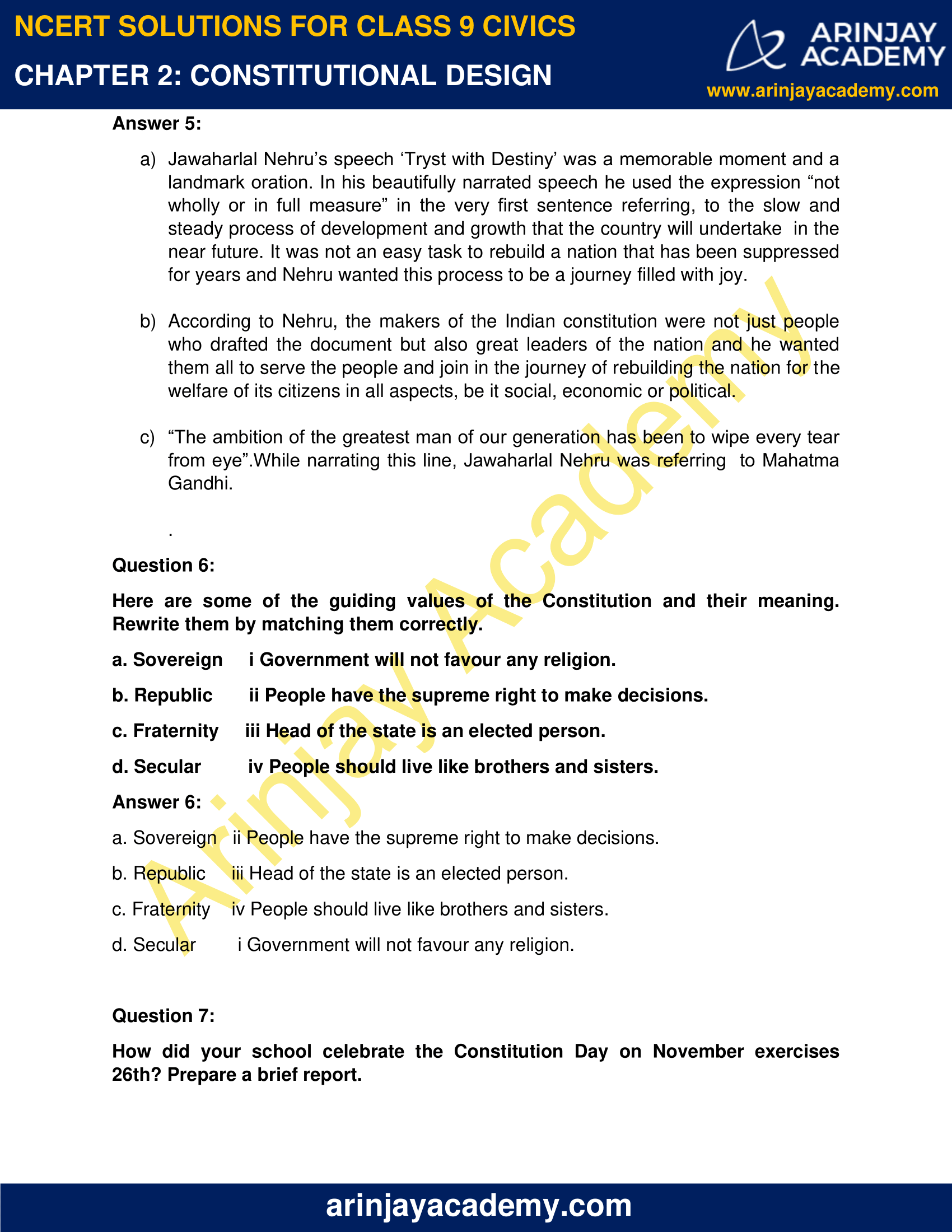 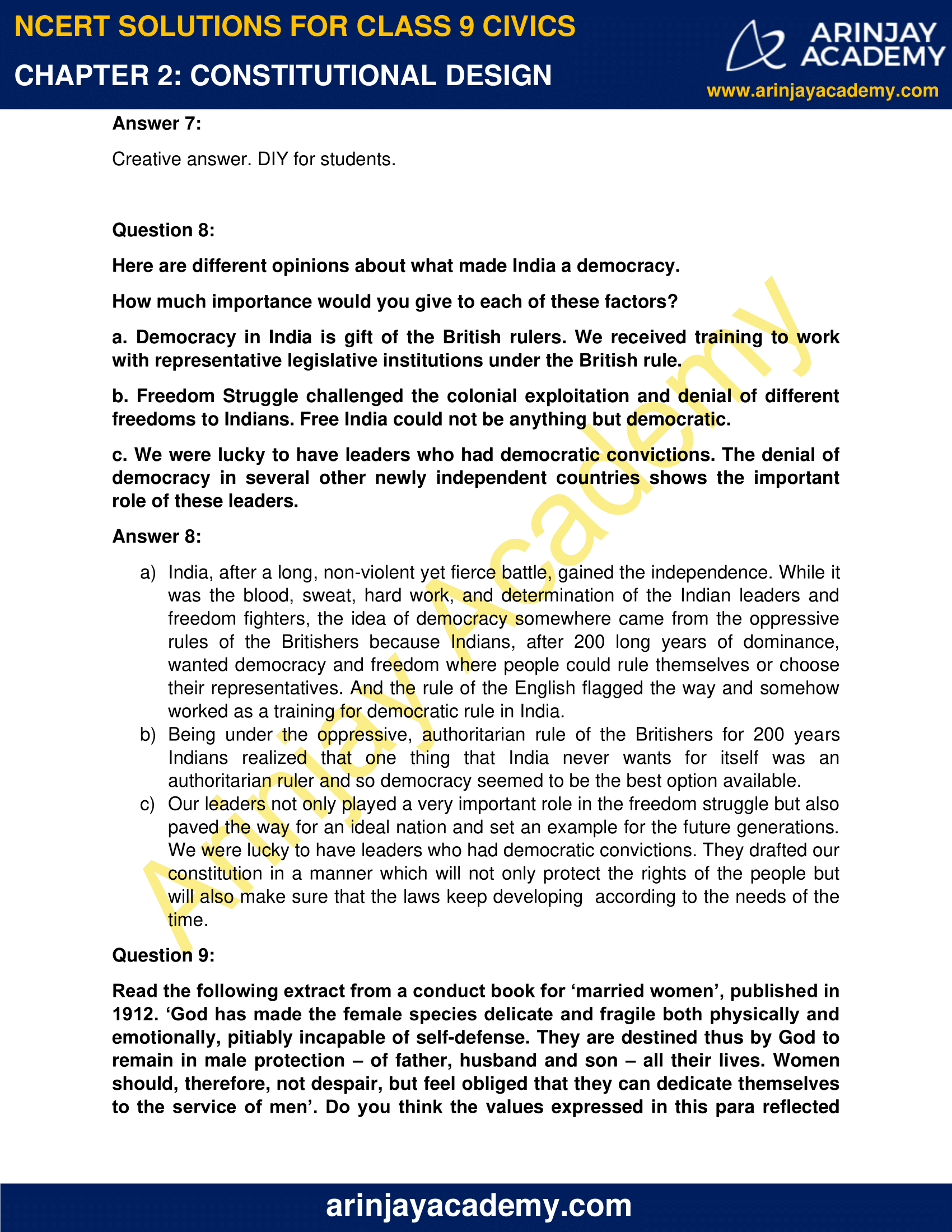 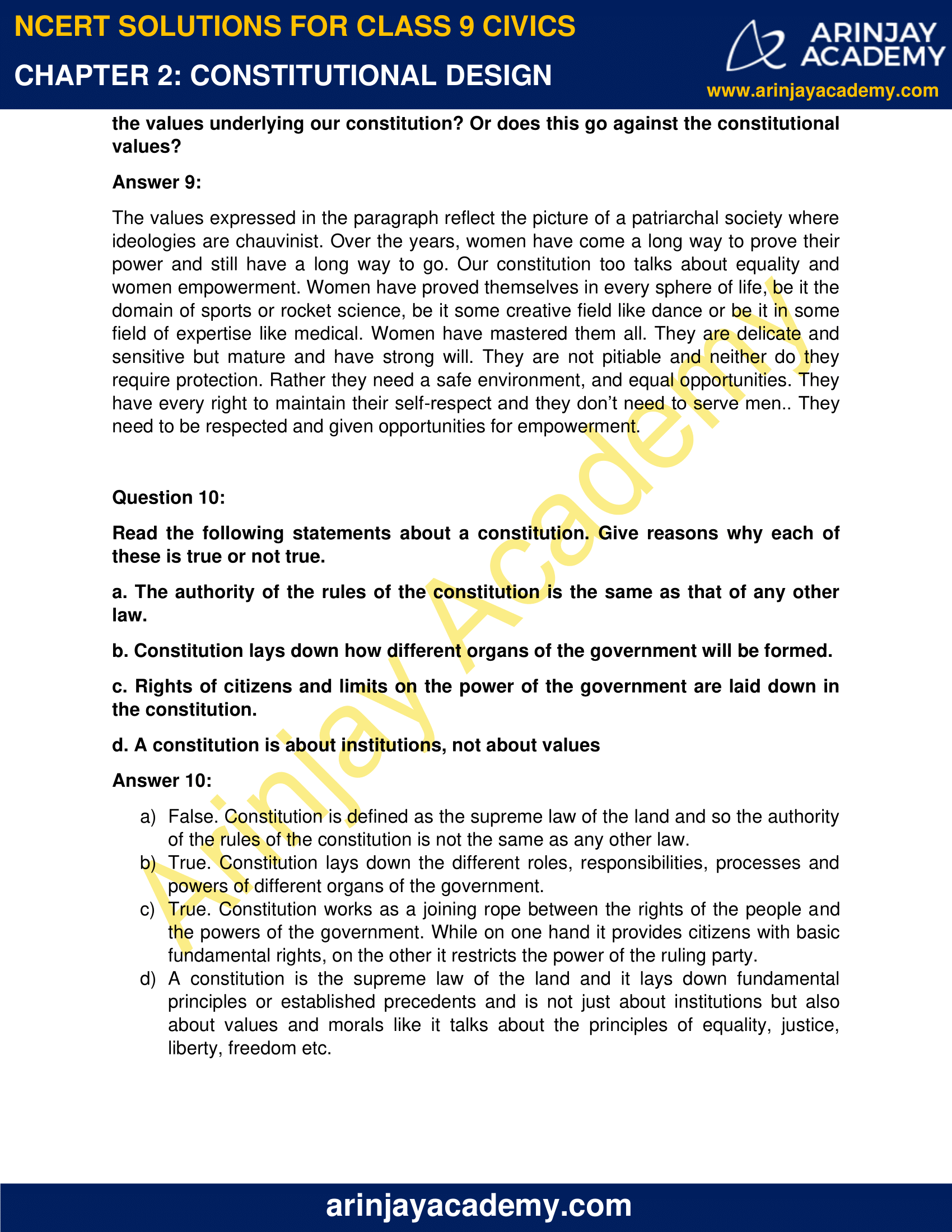 Here are some false statements. Identify the mistake in each case and rewrite these correctly based on what you have read in this chapter.

a) Leaders of the freedom movement had an open mind about whether the country should be democratic or not after independence.

c) A country that has a constitution must be a democracy.

d) Constitution cannot be amended because it is the supreme law of a country.

a) Leaders of the freedom movement had consensus that after independence, India should be a democratic nation.

b) Members of the Constituent Assembly of India held the same views on the basic principles of the constitution.

c) A democratic country must have a constitution.

d) A constitution can be amended except for the basic principles to keep up with the needs of the citizens.

Which of these was the most salient underlying conflict in the making of a democratic constitution in South Africa?

Option (c) between the white majority and black minority.

Which of these is a provision that a democratic constitution does not have?

Option (b) name of the head of state

Match the following leaders with their roles in the making of the Constitution:

Read again the extracts from Nehru’s speech ‘Tryst with Destiny’ and answer the following:

a) Why did Nehru use the expression “not wholly or in full measure” in the first sentence?
b) What pledge did he want the makers of the Indian Constitution to take?
c) “The ambition of the greatest man of our generation has been to wipe every tear from every eye”. Who was he referring to?

a) Jawaharlal Nehru’s speech ‘Tryst with Destiny’ was a memorable moment and a landmark oration. In his beautifully narrated speech he used the expression “not wholly or in full measure” in the very first sentence referring, to the slow and steady process of development and growth that the country will undertake in the near future. It was not an easy task to rebuild a nation that has been suppressed for years and Nehru wanted this process to be a journey filled with joy.

b) According to Nehru, the makers of the Indian constitution were not just people who drafted the document but also great leaders of the nation and he wanted them all to serve the people and join in the journey of rebuilding the nation for the welfare of its citizens in all aspects, be it social, economic or political.

c) “The ambition of the greatest man of our generation has been to wipe every tear from eye”.While narrating this line, Jawaharlal Nehru was referring to Mahatma Gandhi.

Here are some of the guiding values of the Constitution and their meaning. Rewrite them by matching them correctly.

How did your school celebrate the Constitution Day on November exercises 26th? Prepare a brief report.

Here are different opinions about what made India a democracy.

How much importance would you give to each of these factors?

a) Democracy in India is gift of the British rulers. We received training to work with representative legislative institutions under the British rule.
b) Freedom Struggle challenged the colonial exploitation and denial of different freedoms to Indians. Free India could not be anything but democratic.
c) We were lucky to have leaders who had democratic convictions. The denial of democracy in several other newly independent countries shows the important role of these leaders.

a) India, after a long, non-violent yet fierce battle, gained the independence. While it was the blood, sweat, hard work, and determination of the Indian leaders and freedom fighters, the idea of democracy somewhere came from the oppressive rules of the Britishers because Indians, after 200 long years of dominance, wanted democracy and freedom where people could rule themselves or choose their representatives. And the rule of the English flagged the way and somehow worked as a training for democratic rule in India.
b) Being under the oppressive, authoritarian rule of the Britishers for 200 years Indians realized that one thing that India never wants for itself was an authoritarian ruler and so democracy seemed to be the best option available.
c) Our leaders not only played a very important role in the freedom struggle but also paved the way for an ideal nation and set an example for the future generations. We were lucky to have leaders who had democratic convictions. They drafted our constitution in a manner which will not only protect the rights of the people but will also make sure that the laws keep developing according to the needs of the time.

Read the following extract from a conduct book for ‘married women’, published in 1912. ‘God has made the female species delicate and fragile both physically and emotionally, pitiably incapable of self-defense. They are destined thus by God to remain in male protection – of father, husband and son – all their lives. Women should, therefore, not despair, but feel obliged that they can dedicate themselves to the service of men’. Do you think the values expressed in this para reflected the values underlying our constitution? Or does this go against the constitutional values?

The values expressed in the paragraph reflect the picture of a patriarchal society where ideologies are chauvinist. Over the years, women have come a long way to prove their power and still have a long way to go. Our constitution too talks about equality and women empowerment. Women have proved themselves in every sphere of life, be it the domain of sports or rocket science, be it some creative field like dance or be it in some field of expertise like medical. Women have mastered them all. They are delicate and sensitive but mature and have strong will. They are not pitiable and neither do they require protection. Rather they need a safe environment, and equal opportunities. They have every right to maintain their self-respect and they don’t need to serve men.. They need to be respected and given opportunities for empowerment.

Read the following statements about a constitution. Give reasons why each of these is true or not true.

a) False. Constitution is defined as the supreme law of the land and so the authority of the rules of the constitution is not the same as any other law.
b) True. Constitution lays down the different roles, responsibilities, processes and powers of different organs of the government.
c) True. Constitution works as a joining rope between the rights of the people and the powers of the government. While on one hand it provides citizens with basic fundamental rights, on the other it restricts the power of the ruling party.
d) A constitution is the supreme law of the land and it lays down fundamental principles or established precedents and is not just about institutions but also about values and morals like it talks about the principles of equality, justice, liberty, freedom etc.

1.1 Towards a new constitution

2. Why Do We Need A Constitution?

3. Making Of The Indian Constitution

3.1 The path to the Constitution

4. Guiding Values Of The Indian Constitution

4.1 The Dream and the Promise

4.2 Philosophy of the Constitution

Constitution: A constitution can be defined as a body of fundamental principles or established precedents according to which a state is accredited to be ruled.

Legislature: A legislature is a premeditated assembly with the authority to make laws for a political body such as a country or a city.

Treason: The delinquency of betraying one’s own country, especially by endeavoring to kill or takeover the sovereign or government is known as treason.

Constituent Assembly: A constituent assembly is a gathering of leaders or elected representatives accumulated for the purpose of drafting a constitution.