You are here: Home / Archives for Zero coupon bonds 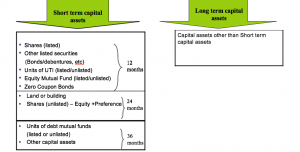 Where share(s) of a company are acquired by the non-resident assessee on redemption of Global Depository Receipts [referred to in Section 115AC(1)(b)] held by such assesse, the period of holding of such shares shall be reckoned from the date on which the request for such redemption was made .

PERIOD OF HOLDING IN CASE OF GDR

TRANSACTIONS NOT REGARDED AS TRANSFER -SECTION 47

Section 47 covers certain transactions, which are not regarded as transfer and, accordingly gains arising thereon are not liable to capital gain tax.

Following transactions shall not be regarded as transfer for the purpose of capital gains tax in respect of non-residents and foreign companies : –