NCERT Solutions for Class 10 History Chapter 4 – The age of Industrialisation (Social Science), contains solutions to various questions in Exercise for Chapter 4.  At the end of the Solutions, all the keywords which are important to understand The age of Industrialisation Class 10 History, have been explained in a simple and easy to understand manner. We are providing NCERT Solutions for Class 10 all subjects which can be accessed by clicking here. 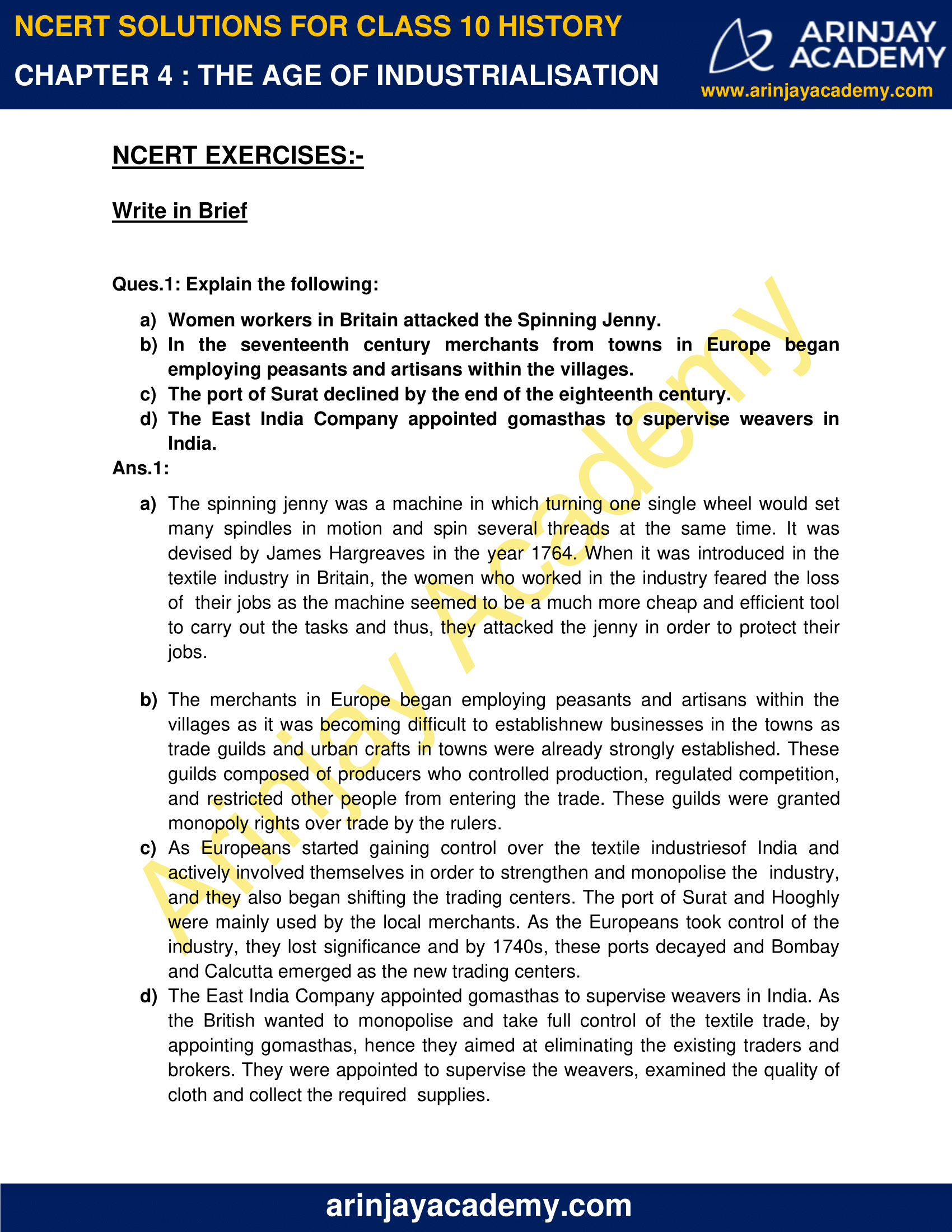 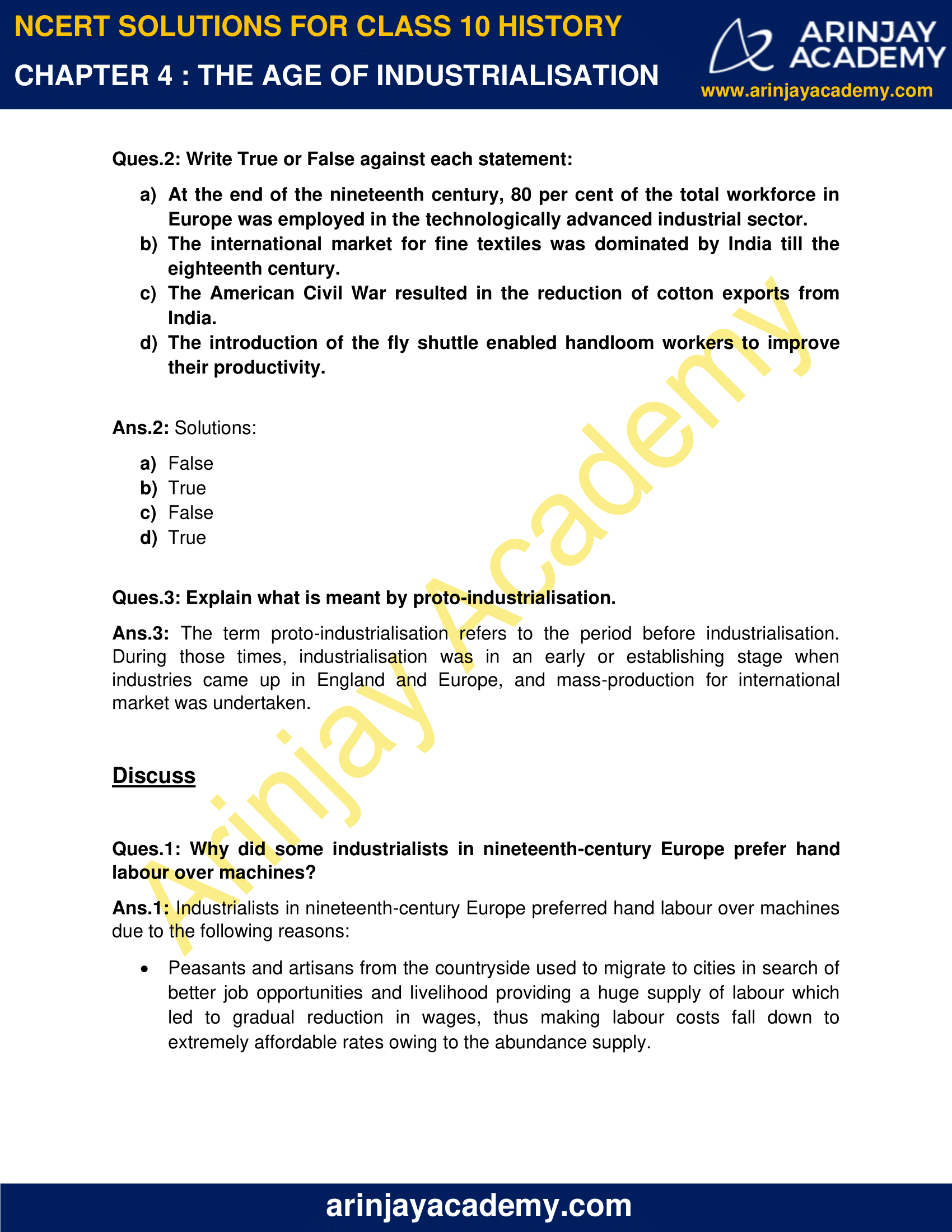 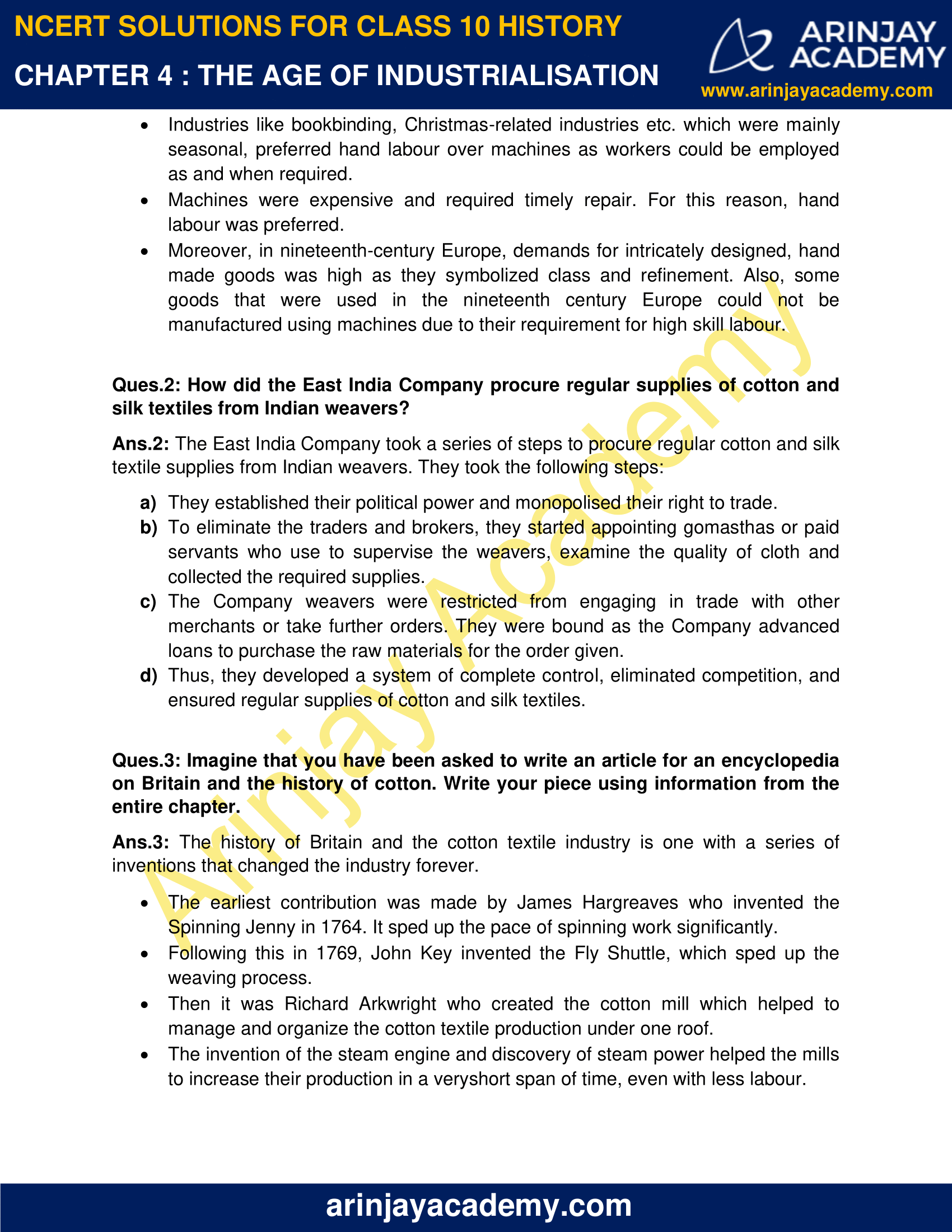 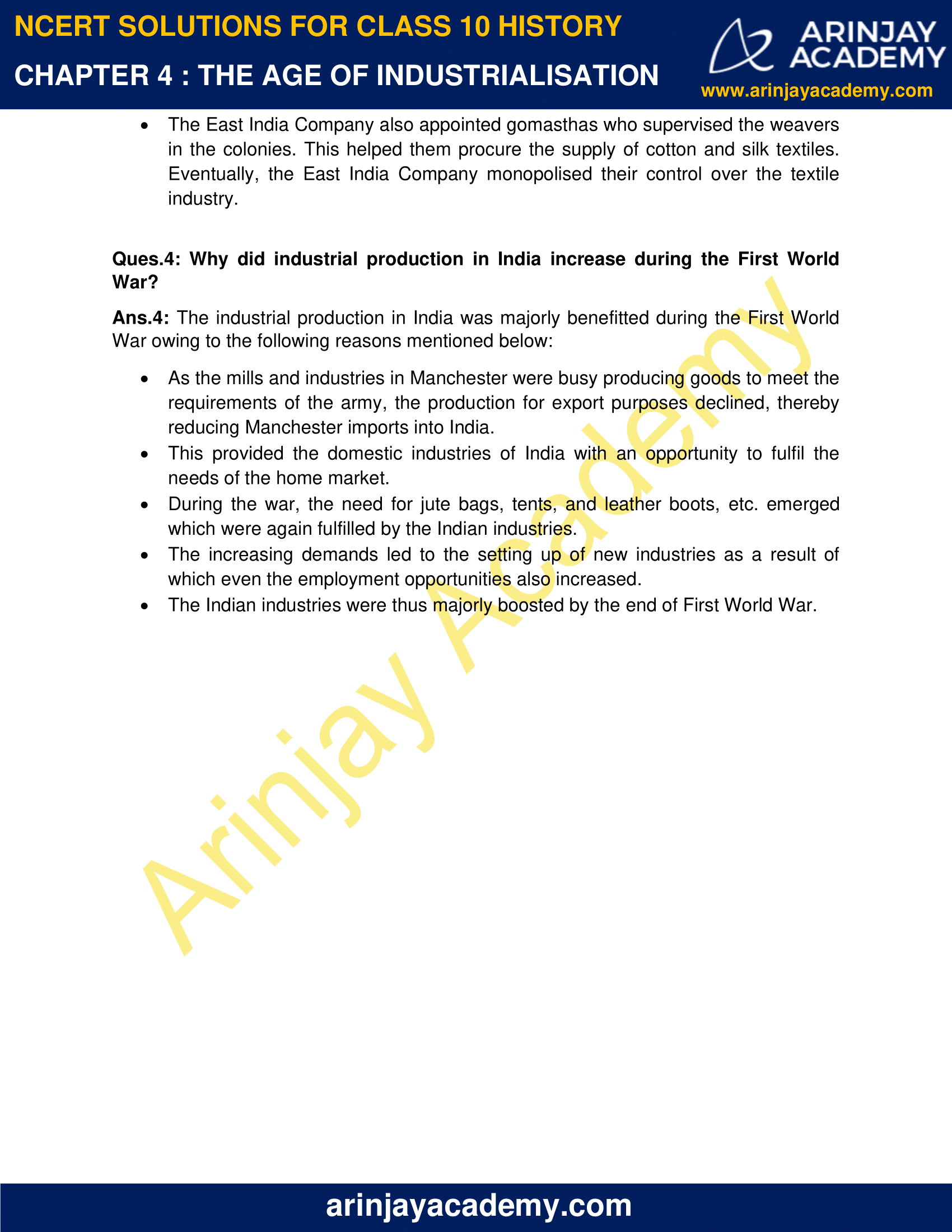 a) Women workers in Britain attacked the Spinning Jenny.

b) In the seventeenth century merchants from towns in Europe began employing peasants and artisans within the villages.

c) The port of Surat declined by the end of the eighteenth century.

a) The spinning jenny was a machine in which turning one single wheel would set many spindles in motion and spin several threads at the same time. It was devised by James Hargreaves in the year 1764. When it was introduced in the textile industry in Britain, the women who worked in the industry feared the loss of their jobs as the machine seemed to be a much more cheap and efficient tool to carry out the tasks and thus, they attacked the jenny in order to protect their jobs.

b) The merchants in Europe began employing peasants and artisans within the villages as it was becoming difficult to establish new businesses in the towns as trade guilds and urban crafts in towns were already strongly established. These guilds composed of producers who controlled production, regulated competition, and restricted other people from entering the trade. These guilds were granted monopoly rights over trade by the rulers.

c) As Europeans started gaining control over the textile industries of India and actively involved themselves in order to strengthen and monopolise the industry, and they also began shifting the trading centers. The port of Surat and Hooghly were mainly used by the local merchants. As the Europeans took control of the industry, they lost significance and by 1740s, these ports decayed and Bombay and Calcutta emerged as the new trading centers.

d) The East India Company appointed gomasthas to supervise weavers in India. As the British wanted to monopolise and take full control of the textile trade, by appointing gomasthas, hence they aimed at eliminating the existing traders and brokers. They were appointed to supervise the weavers, examined the quality of cloth and collect the required

Ques.2: Write True or False against each statement:

a) At the end of the nineteenth century, 80 per cent of the total workforce in Europe was employed in the technologically advanced industrial sector.

b) The international market for fine textiles was dominated by India till the eighteenth century.

c) The American Civil War resulted in the reduction of cotton exports from India.

d) The introduction of the fly shuttle enabled handloom workers to improve their productivity.

Ques.3: Explain what is meant by proto-industrialisation.

Ques.1: Why did some industrialists in nineteenth-century Europe prefer hand labour over machines?

Ans.1: Industrialists in nineteenth-century Europe preferred hand labour over machines due to the following reasons:

Ques.2: How did the East India Company procure regular supplies of cotton and silk textiles from Indian weavers?

Ans.2: The East India Company took a series of steps to procure regular cotton and silk textile supplies from Indian weavers. They took the following steps:

a) They established their political power and monopolised their right to trade.

b) To eliminate the traders and brokers, they started appointing gomasthas or paid servants who use to supervise the weavers, examine the quality of cloth and collected the required supplies.

c) The Company weavers were restricted from engaging in trade with other merchants or take further orders. They were bound as the Company advanced loans to purchase the raw materials for the order given.

d) Thus, they developed a system of complete control, eliminated competition, and ensured regular supplies of cotton and silk textiles.

Ques.3: Imagine that you have been asked to write an article for an encyclopedia on Britain and the history of cotton. Write your piece using information from the entire chapter.

Ans.3: The history of Britain and the cotton textile industry is one with a series of inventions that changed the industry forever.

Ques.4: Why did industrial production in India increase during the First World War?

Ans.4: The industrial production in India was majorly benefited during the First World War owing to the following reasons mentioned below:

1. Before the Industrial Revolution

1.1 The Coming Up of the Factory

1.2 The Pace of Industrial Change

3. Industrialisation in the Colonies

3.1 The Age of Indian Textiles

3.2 What Happened to Weavers?

4.2 Where Did the Workers Come From?

5. The Peculiarities of Industrial Growth

Orient: Orient refers to the countries that lie to the east of the Mediterranean in Asia. This term depicts the western perception of this region as traditional, mysterious, and pre-modern.

Proto: Initial or early form of something.

Stapler: A person who mainly works with the wool by categorizing it or attaching it depending on the fiber.

Fuller: It refers to a person who gathers cloth by pleating.

Carding: The process of preparing cotton or wool fibers before spinning.

Spinning Jenny: A machine in which turning one single wheel would set many spindles in motion and spin several threads at the same time. It was devised by James Hargreaves in the year 1764.

Sepoy: The British pronunciation of the Hindi word sipahi, meaning an Indian soldier who served in the British arm force.

Fly Shuttle: A mechanical device for weaving that places horizontal threads over vertical threads, and is moved using ropes and pullies.