NCERT Solutions for Class 10 History Chapter 1 – The Rise of Nationalism in Europe (Social Science), contains solutions to various questions in Exercise for Chapter 1.  At the end of the Solutions, all the keywords which are important to understand The Rise of Nationalism in Europe Class 10 History, have been explained in a simple and easy to understand manner. We are providing NCERT Solutions for Class 10 all subjects which can be accessed by clicking here. 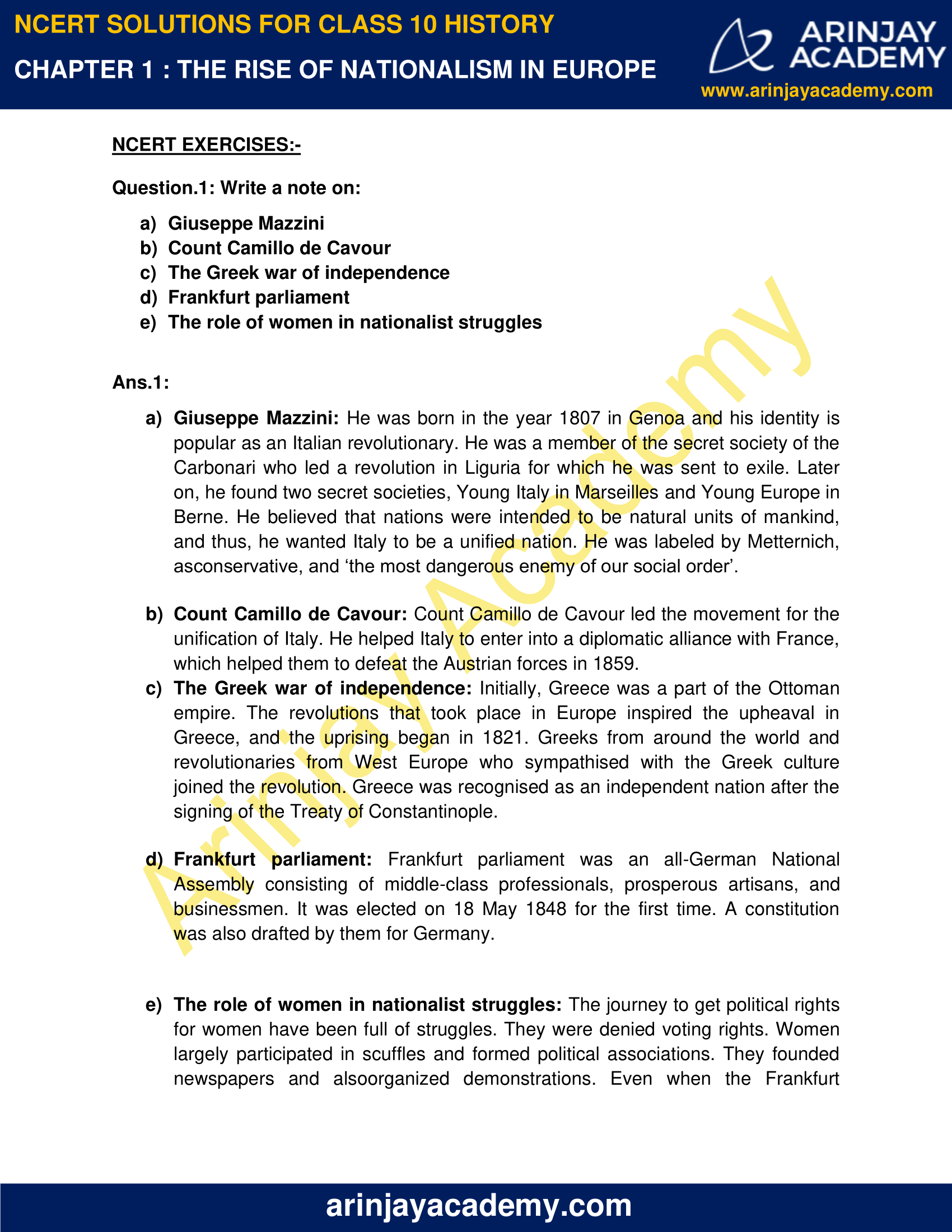 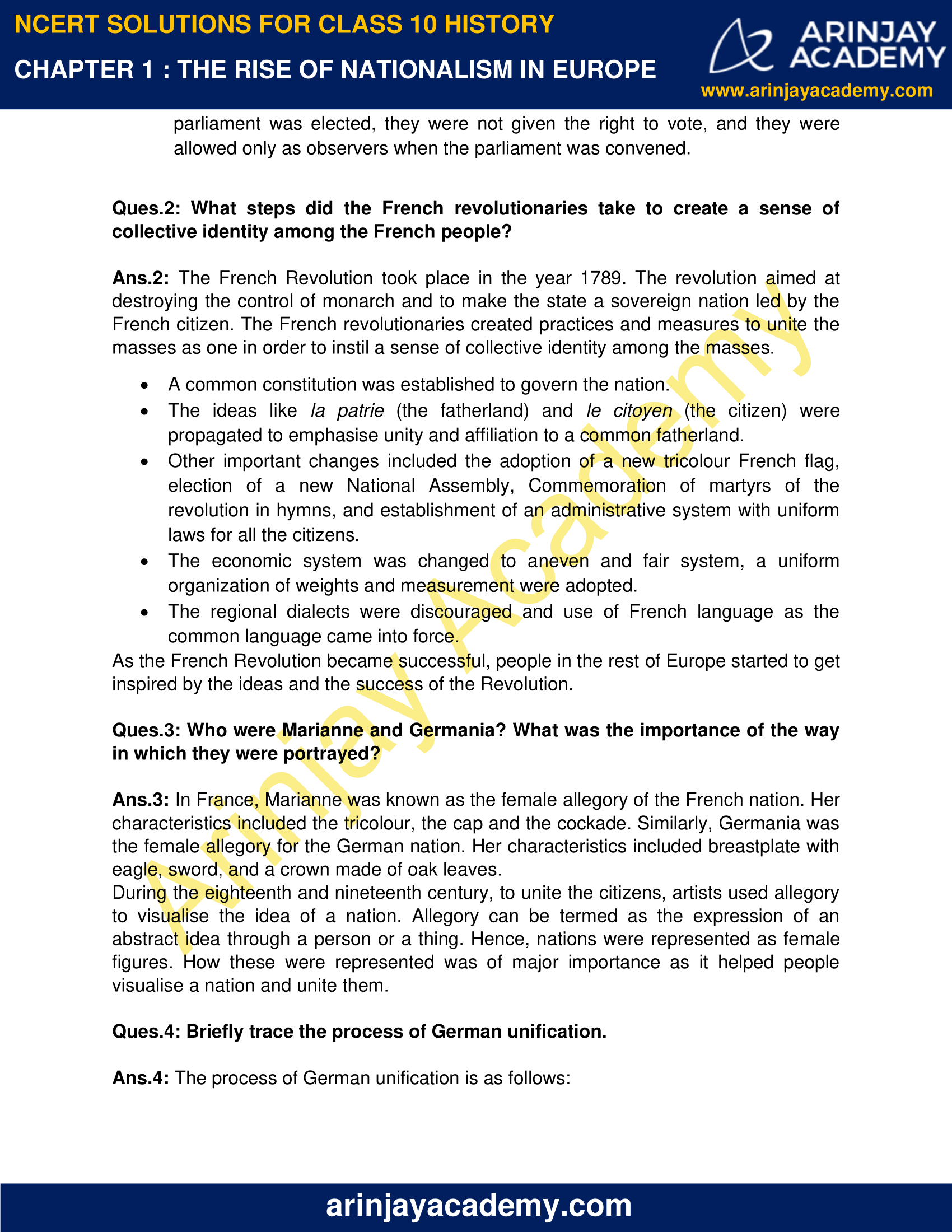 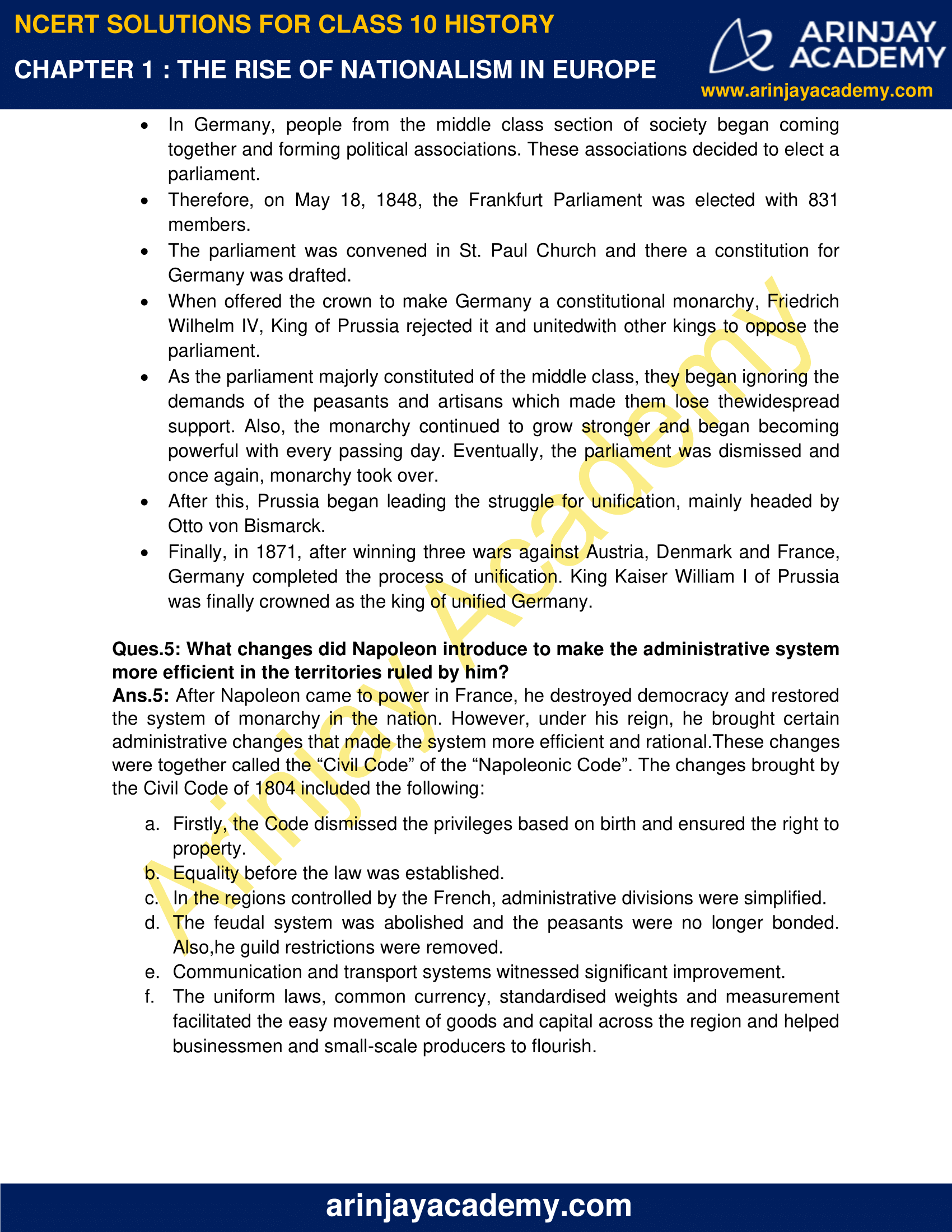 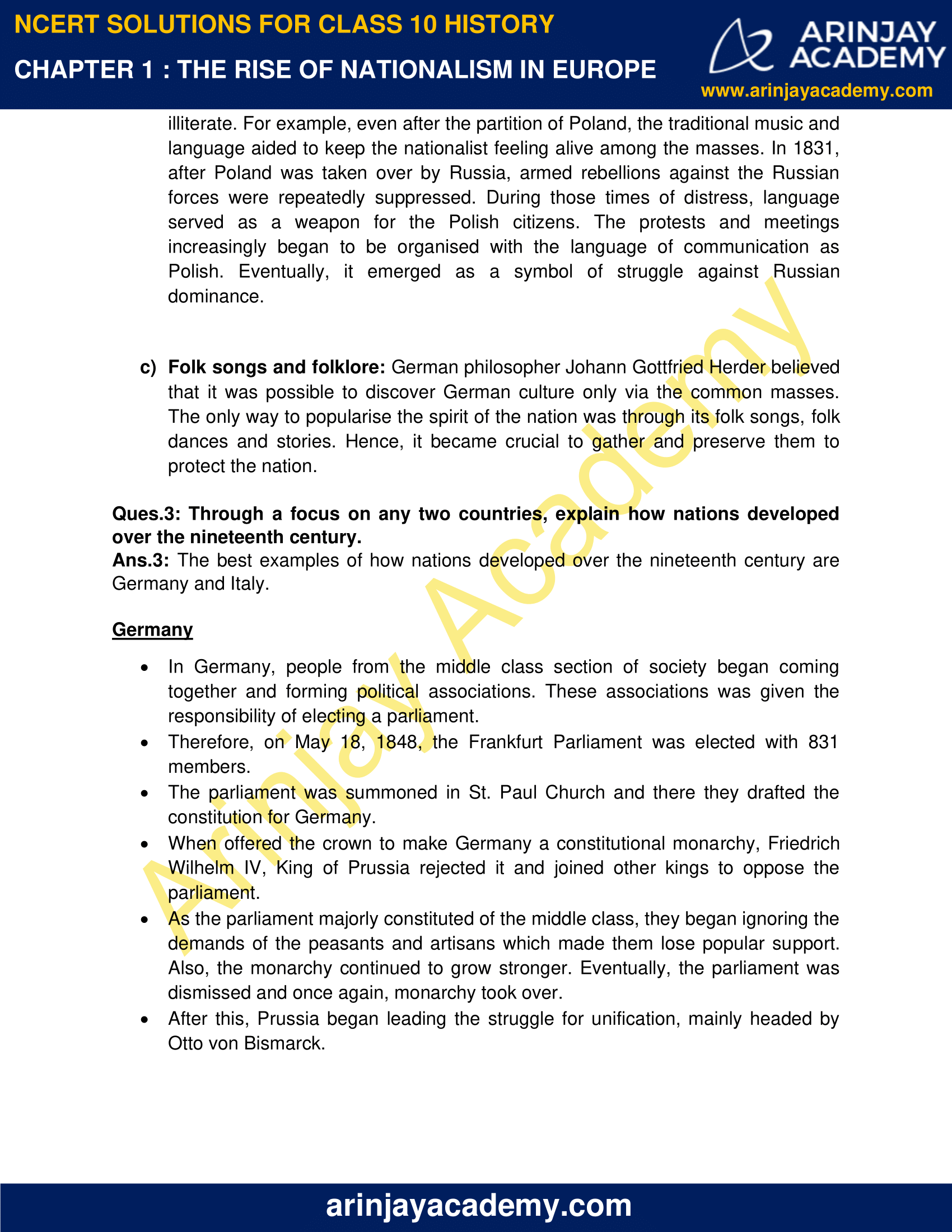 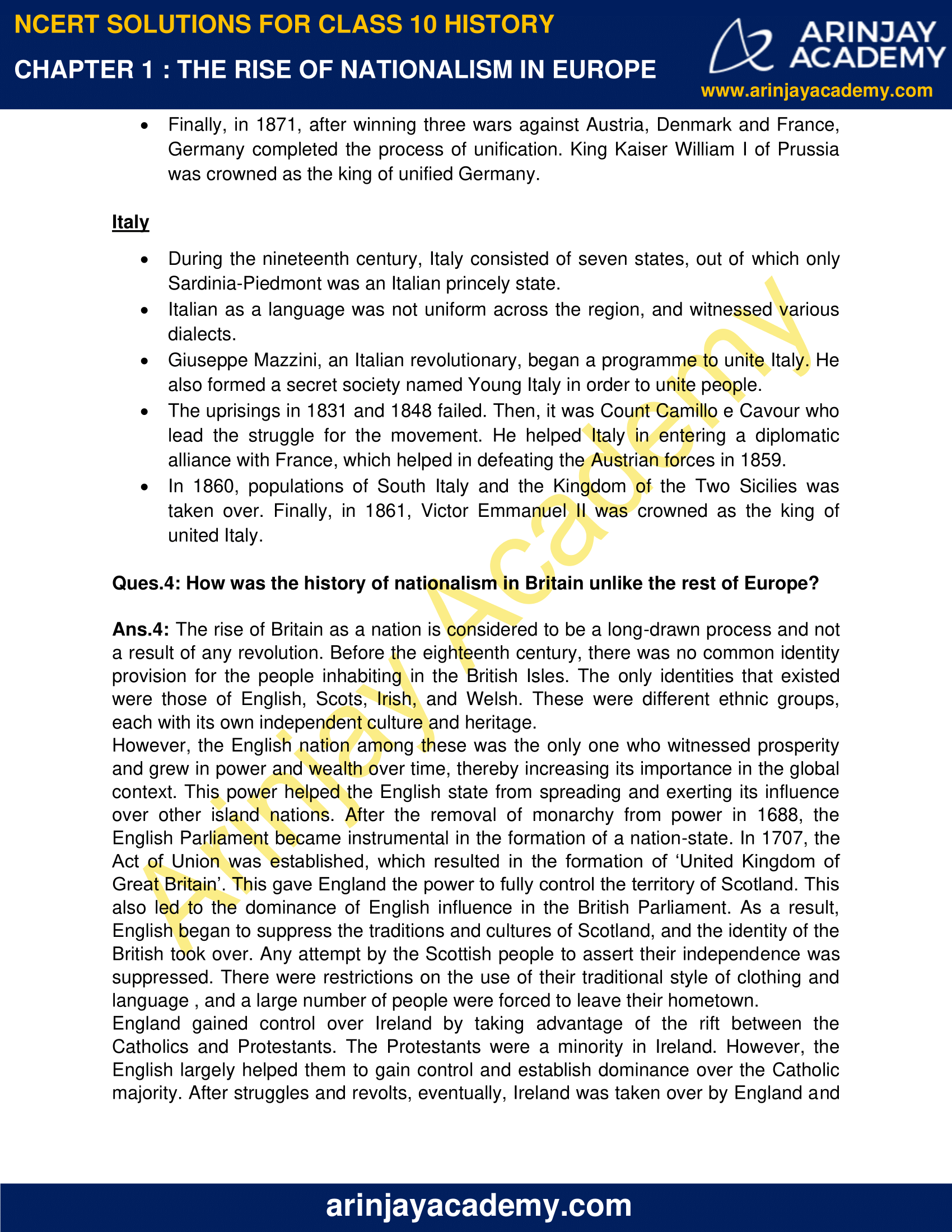 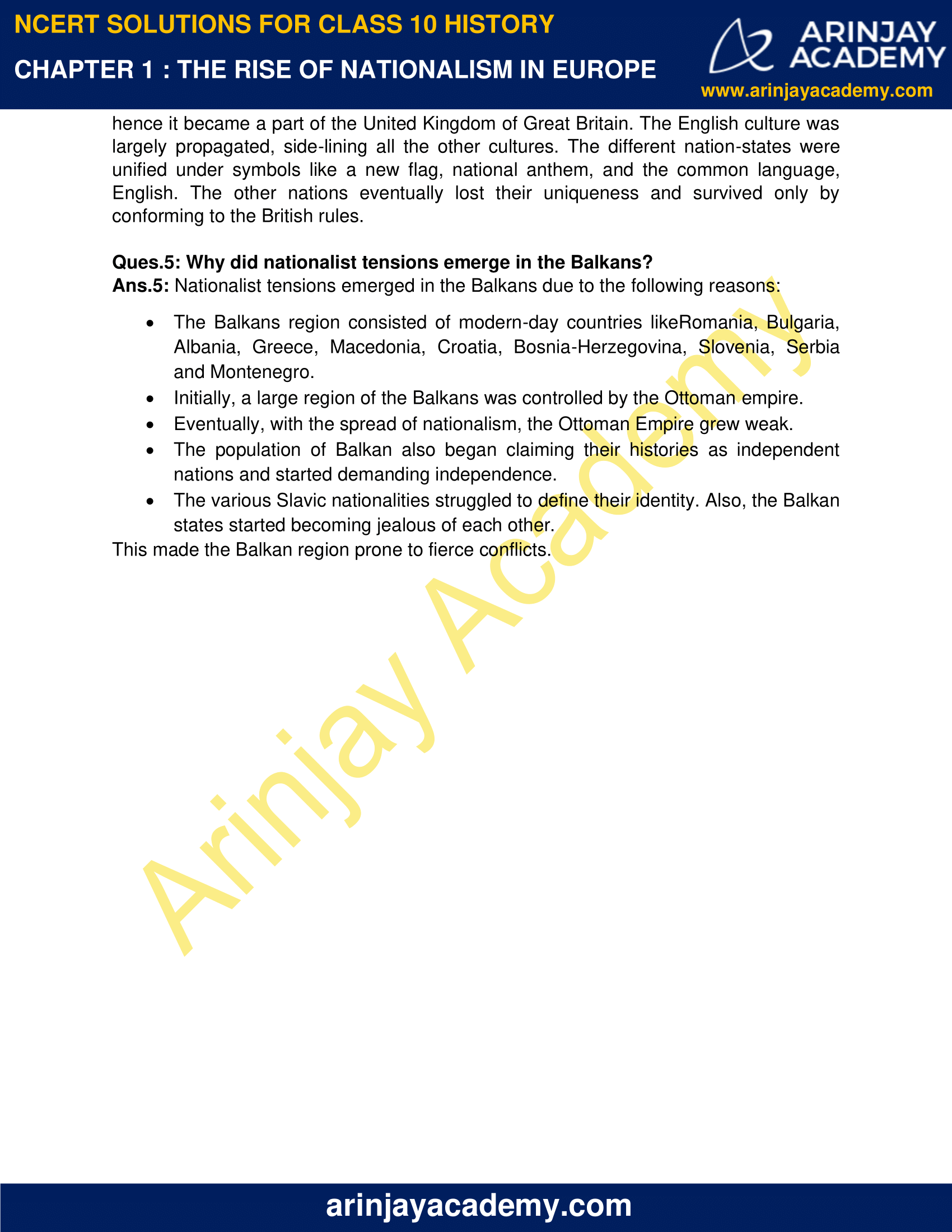 Question.1: Write a note on:

a) Giuseppe Mazzini: He was born in the year 1807 in Genoa and his identity is popular as an Italian revolutionary. He was a member of the secret society of the Carbonari who led a revolution in Liguria for which he was sent to exile. Later on, he found two secret societies, Young Italy in Marseilles and Young Europe in Berne. He believed that nations were intended to be natural units of mankind, and thus, he wanted Italy to be a unified nation. He was labeled by Metternich, as conservative, and ‘the most dangerous enemy of our social order’.

c) The Greek war of independence: Initially, Greece was a part of the Ottoman empire. The revolutions that took place in Europe inspired the upheaval in Greece, and the uprising began in 1821. Greeks from around the world and revolutionaries from West Europe who sympathised with the Greek culture joined the revolution. Greece was recognised as an independent nation after the signing of the Treaty of Constantinople.

d) Frankfurt parliament: Frankfurt parliament was an all-German National Assembly consisting of middle-class professionals, prosperous artisans, and businessmen. It was elected on 18 May 1848 for the first time. A constitution was also drafted by them for Germany.

e) The role of women in nationalist struggles: The journey to get political rights for women have been full of struggles. They were denied voting rights. Women largely participated in scuffles and formed political associations. They founded newspapers and also organized demonstrations. Even when the Frankfurt parliament was elected, they were not given the right to vote, and they were allowed only as observers when the parliament was convened.


Ques.2: What steps did the French revolutionaries take to create a sense of collective identity among the French people?

Ans.2: The French Revolution took place in the year 1789. The revolution aimed at destroying the control of monarch and to make the state a sovereign nation led by the French citizen. The French revolutionaries created practices and measures to unite the masses as one in order to instil a sense of collective identity among the masses.

As the French Revolution became successful, people in the rest of Europe started to get inspired by the ideas and the success of the Revolution.

Ques.3: Who were Marianne and Germania? What was the importance of the way in which they were portrayed?

During the eighteenth and nineteenth century, to unite the citizens, artists used allegory to visualise the idea of a nation. Allegory can be termed as the expression of an abstract idea through a person or a thing. Hence, nations were represented as female figures. How these were represented was of major importance as it helped people visualise a nation and unite them.

Ans.4: The process of German unification is as follows:

Ques.5: What changes did Napoleon introduce to make the administrative system more efficient in the territories ruled by him?

Ans.5: After Napoleon came to power in France, he destroyed democracy and restored the system of monarchy in the nation. However, under his reign, he brought certain administrative changes that made the system more efficient and rational.These changes were together called the “Civil Code” of the “Napoleonic Code”. The changes brought by the Civil Code of 1804 included the following:

However, these administrative changes did not satisfy the people for long as Napoleon’s rule brought with it increased censorship, taxation, and forced entry into the French armies.

Ques.1: Explain what is meant by the 1848 revolution of the liberals.  What were the political, social and economic ideas supported by the liberals?

Ans.1: The year 1848 witnessed revolutions from all around Europe.

Ques.2: Choose three examples to show the contribution of culture to the growth of nationalism in Europe.

Ans.2: The spirit of nationalism can never rise just like that due to territorial expansion and wars. Cultural affiliation plays a very crucial role in unifying the masses and inspiring them to work in the direction of nationalism. Even during the spread of nationalism in Europe cultural significance played an important role to mobilise the citizens. The different ways in which culture contributed to the growth of nationalism were:

a) Romanticism: The “Romanticism” movement played a significant role in the igniting the nationalist sentiment among the masses. The idea of Romanticism was based on intuition, emotions, and mystical feelings. It aimed at instilling a sense of shared culture and collective heritage as the basis of a nation.Various scholars and philosophers propagated the idea of Romanticism.

b) Language: The preservation of vernacular languages was also equally important. The propagation of ideas in the vernacular language could facilitate the spread of nationalist ideas and beliefs to a larger population who were illiterate. For example, even after the partition of Poland, the traditional music and language aided to keep the nationalist feeling alive among the masses. In 1831, after Poland was taken over by Russia, armed rebellions against the Russian forces were repeatedly suppressed. During those times of distress, language served as a weapon for the Polish citizens. The protests and meetings increasingly began to be organised with the language of communication as Polish. Eventually, it emerged as a symbol of struggle against Russian dominance.

c) Folk songs and folklore: German philosopher Johann Gottfried Herder believed that it was possible to discover German culture only via the common masses. The only way to popularise the spirit of the nation was through its folk songs, folk dances and stories. Hence, it became crucial to gather and preserve them to protect the nation.

Ques.3: Through a focus on any two countries, explain how nations developed over the nineteenth century.

Ans.3: The best examples of how nations developed over the nineteenth century are Germany and Italy.

Ques.4: How was the history of nationalism in Britain unlike the rest of Europe?

Ans.4: The rise of Britain as a nation is considered to be a long-drawn process and not a result of any revolution. Before the eighteenth century, there was no common identity provision for the people inhabiting in the British Isles. The only identities that existed were those of English, Scots, Irish, and Welsh. These were different ethnic groups, each with its own independent culture and heritage.

However, the English nation among these was the only one who witnessed prosperity and grew in power and wealth over time, thereby increasing its importance in the global context. This power helped the English state from spreading and exerting its influence over other island nations. After the removal of monarchy from power in 1688, the English Parliament became instrumental in the formation of a nation-state. In 1707, the Act of Union was established, which resulted in the formation of ‘United Kingdom of Great Britain’. This gave England the power to fully control the territory of Scotland. This also led to the dominance of English influence in the British Parliament. As a result, English began to suppress the traditions and cultures of Scotland, and the identity of the British took over. Any attempt by the Scottish people to assert their independence was suppressed. There were restrictions on the use of their traditional style of clothing and language , and a large number of people were forced to leave their hometown.

England gained control over Ireland by taking advantage of the rift between the Catholics and Protestants. The Protestants were a minority in Ireland. However, the English largely helped them to gain control and establish dominance over the Catholic majority. After struggles and revolts, eventually, Ireland was taken over by England and hence it became a part of the United Kingdom of Great Britain. The English culture was largely propagated, side-lining all the other cultures. The different nation-states were unified under symbols like a new flag, national anthem, and the common language, English. The other nations eventually lost their uniqueness and survived only by conforming to the British rules.

Ques.5: Why did nationalist tensions emerge in the Balkans?

Ans.5: Nationalist tensions emerged in the Balkans due to the following reasons:

This made the Balkan region prone to fierce conflicts.

1. The French Revolution and the Idea of the Nation

2. The Making of Nationalism in Europe

2.1 The Aristocracy and the New Middle Class

2.2 What did Liberal Nationalism Stand for?

3.1 The Romantic Imagination and National Feeling

4. The Making of Germany and Italy

4.1 Germany – Can the Army be the Architect of a Nation?

4.3 The Strange Case of Britain

Important Terms Relevant for NCERT Solutions for Class 10 History Chapter 1 – The Rise of Nationalism in Europe :

Absolutist: This is a form of government where all the powers are vested in the ruler and there are no restrictions on the usage of the power. It is also known as monarchical government.

Utopian: An ideal state of the society which is unlikely to exist.

Plebiscite: A direct system of voting where the citizens vote in favour or against a proposal.

Suffrage: The right to vote.

Conservatism: Conservatism refers to the political philosophy that stressed the importance of tradition, established institutions and customs like the Church, and preferred gradual development to quick change.

Ideology: A system of ideas and beliefs that reflects a particular social and political vision.

Ethnic: A group or system that relates to common racial, background, or tribal origin that a community identifies with.

Allegory: The expression of an abstract idea through a person or a thing.