NCERT Solutions for Class 10 History Chapter 3 – The Making of a Global World (Social Science), contains solutions to various questions in Exercise for Chapter 3.  At the end of the Solutions, all the keywords which are important to understand The Making of a Global World Class 10 History, have been explained in a simple and easy to understand manner. We are providing NCERT Solutions for Class 10 all subjects which can be accessed by clicking here. 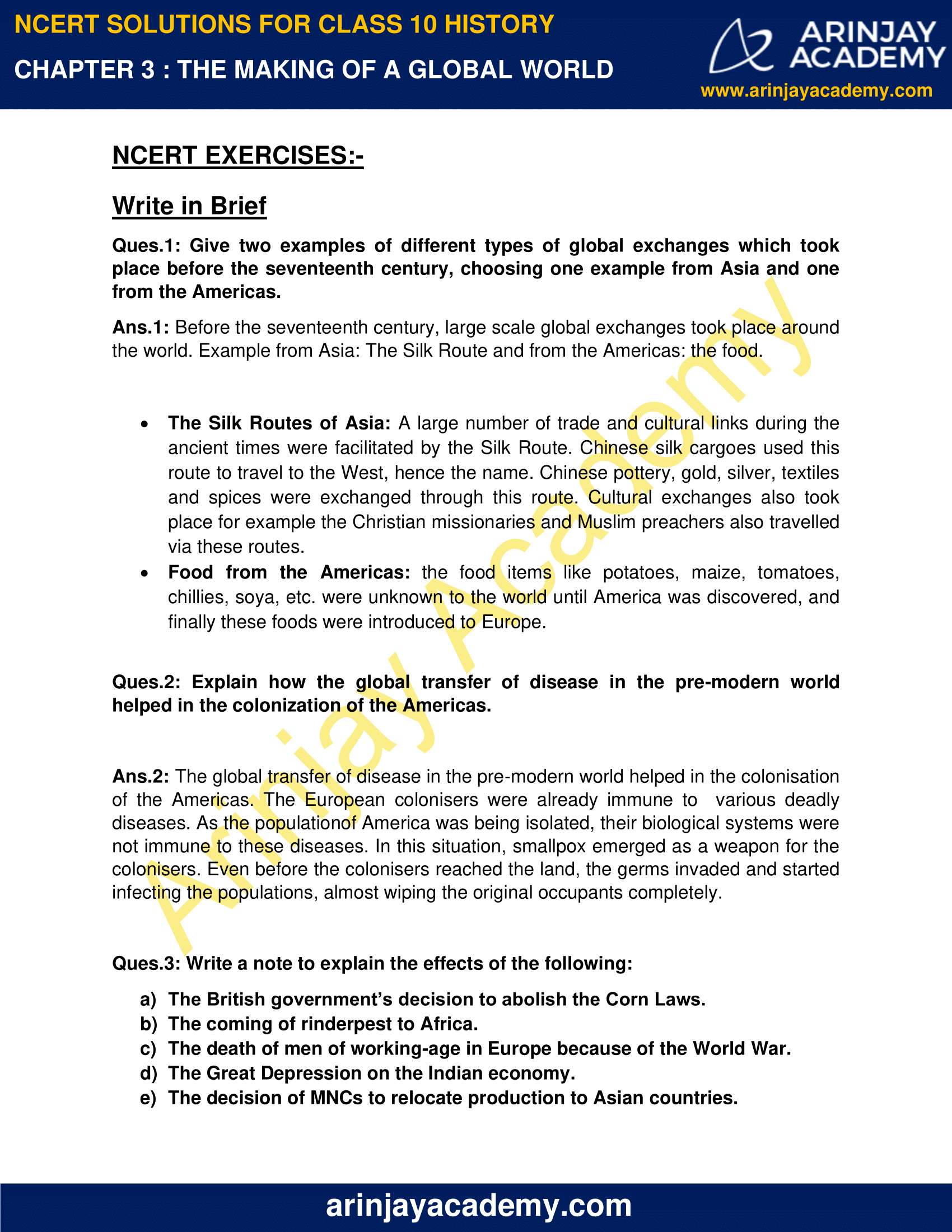 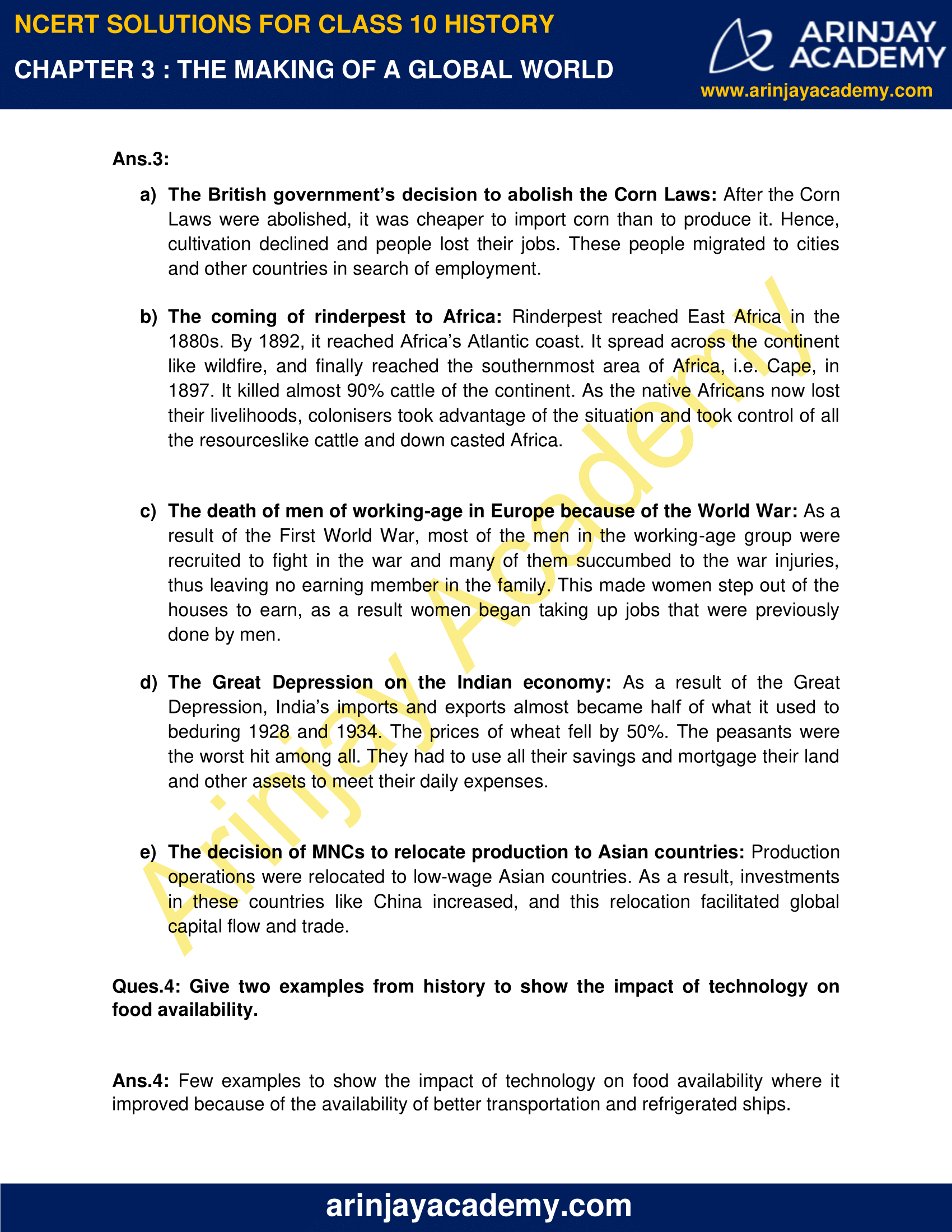 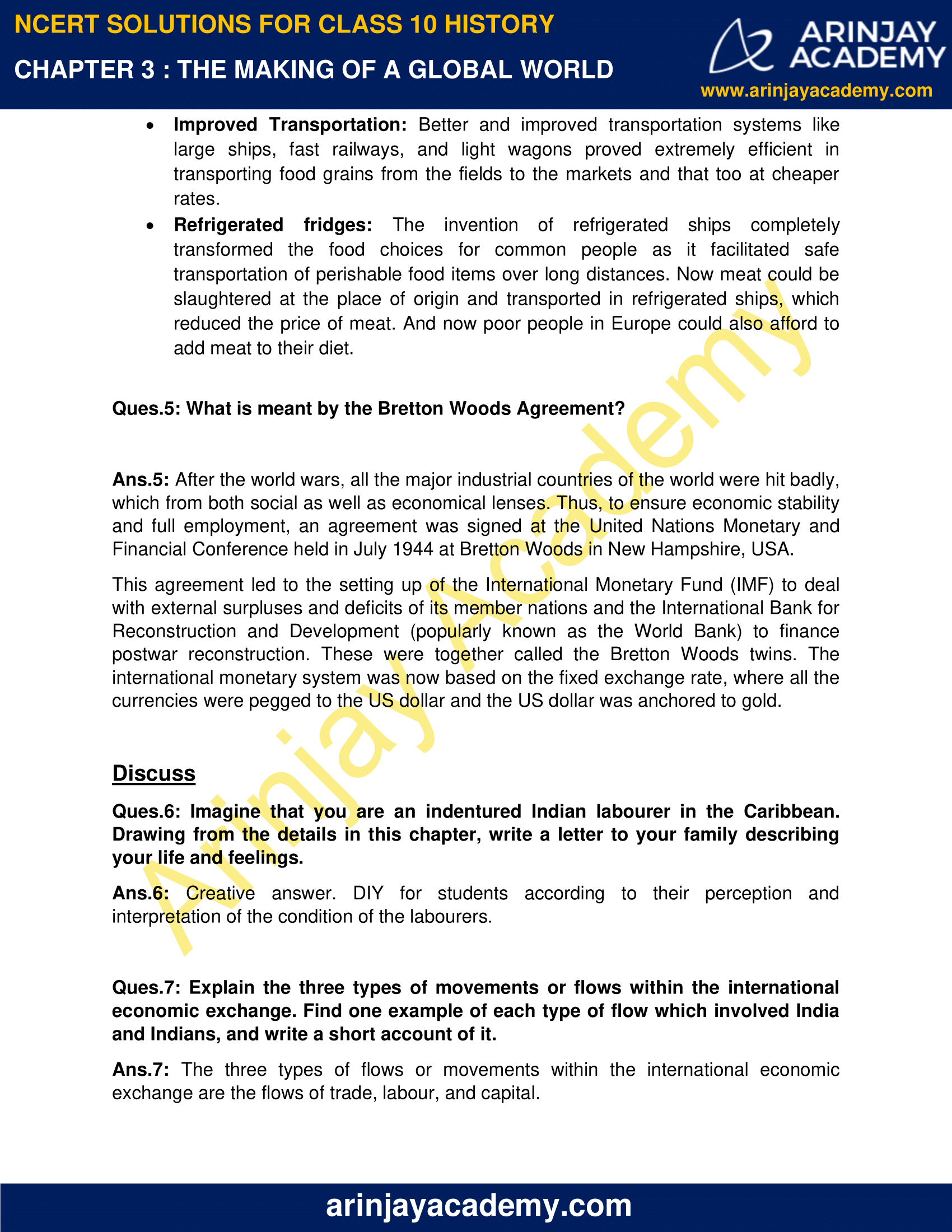 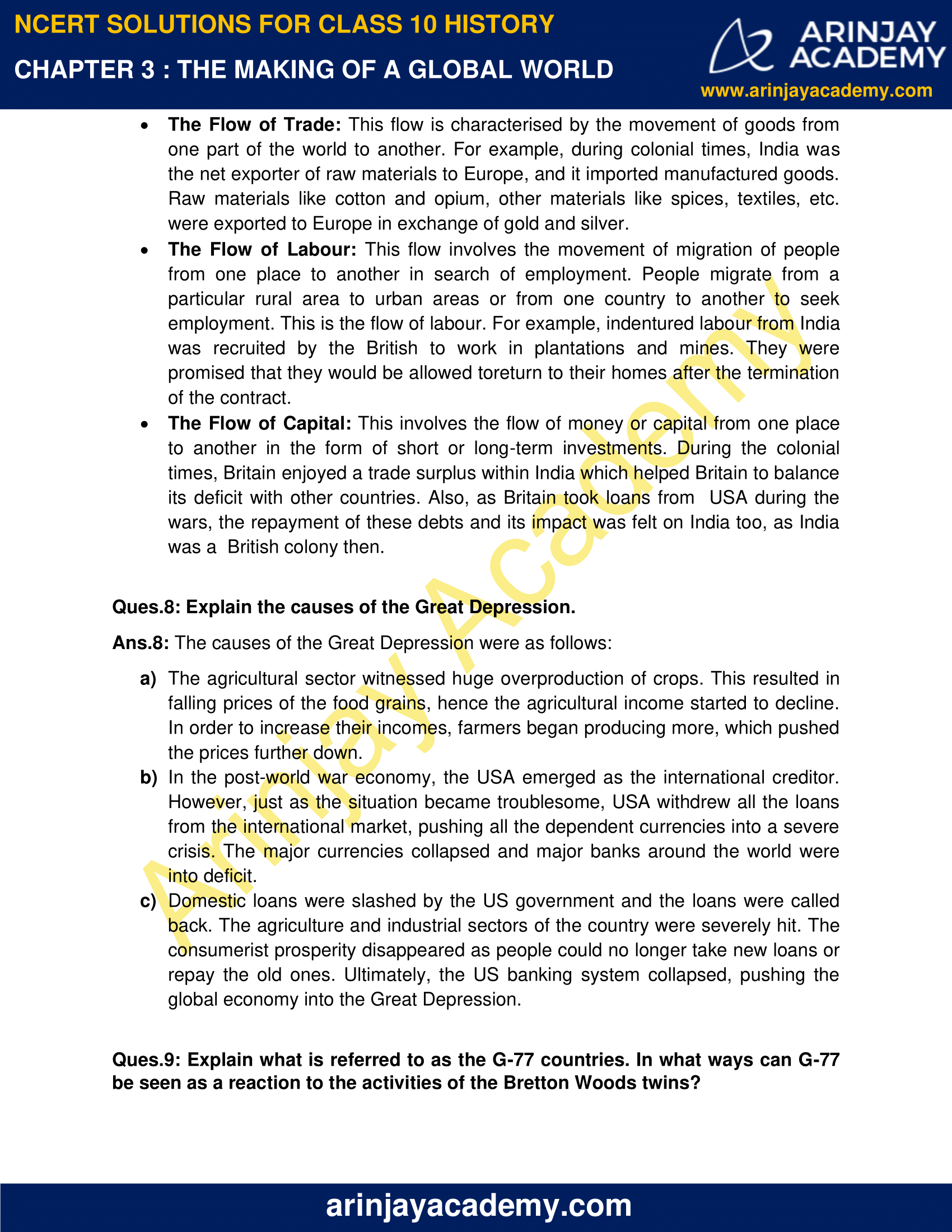 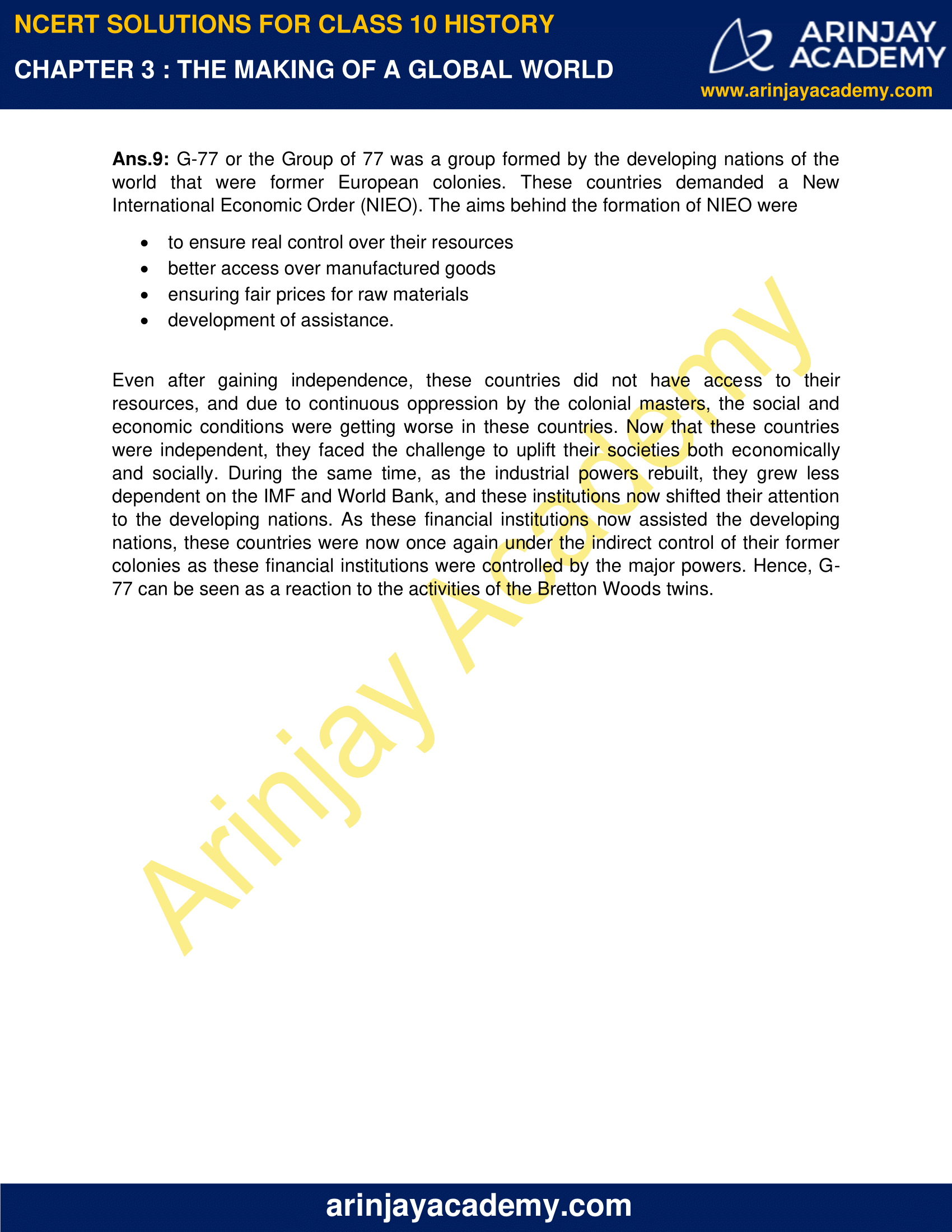 Ques.1: Give two examples of different types of global exchanges which took place before the seventeenth century, choosing one example from Asia and one from the Americas.

Ans.1: Before the seventeenth century, large scale global exchanges took place around the world. Example from Asia: The Silk Route and from the Americas: the food.

Ques.2: Explain how the global transfer of disease in the pre-modern world helped in the colonization of the Americas.

Ans.2: The global transfer of disease in the pre-modern world helped in the colonisation of the Americas. The European colonisers were already immune to  various deadly diseases. As the population of America was being isolated, their biological systems were not immune to these diseases. In this situation, smallpox emerged as a weapon for the colonisers. Even before the colonisers reached the land, the germs invaded and started infecting the populations, almost wiping the original occupants completely.

Ques.3: Write a note to explain the effects of the following:

a) The British government’s decision to abolish the Corn Laws.
b) The coming of rinderpest to Africa.
c) The death of men of working-age in Europe because of the World War.
d) The Great Depression on the Indian economy.
e) The decision of MNCs to relocate production to Asian countries.

a) The British government’s decision to abolish the Corn Laws: After the Corn Laws were abolished, it was cheaper to import corn than to produce it. Hence, cultivation declined and people lost their jobs. These people migrated to cities and other countries in search of employment.

b) The coming of rinderpest to Africa: Rinderpest reached East Africa in the 1880s. By 1892, it reached Africa’s Atlantic coast. It spread across the continent like wildfire, and finally reached the southernmost area of Africa, i.e. Cape, in 1897. It killed almost 90% cattle of the continent. As the native Africans now lost their livelihoods, colonisers took advantage of the situation and took control of all the resources like cattle and down casted Africa.

c) The death of men of working-age in Europe because of the World War: As a result of the First World War, most of the men in the working-age group were recruited to fight in the war and many of them succumbed to the war injuries, thus leaving no earning member in the family. This made women step out of the houses to earn, as a result women began taking up jobs that were previously done by men.

d) The Great Depression on the Indian economy: As a result of the Great Depression, India’s imports and exports almost became half of what it used to be during 1928 and 1934. The prices of wheat fell by 50%. The peasants were the worst hit among all. They had to use all their savings and mortgage their land and other assets to meet their daily expenses.

e) The decision of MNCs to relocate production to Asian countries: Production operations were relocated to low-wage Asian countries. As a result, investments in these countries like China increased, and this relocation facilitated global capital flow and trade.

Ques.4: Give two examples from history to show the impact of technology on food availability.

Ans.4: Few examples to show the impact of technology on food availability where it improved because of the availability of better transportation and refrigerated ships.

Ques.5: What is meant by the Bretton Woods Agreement?

Ans.5: After the world wars, all the major industrial countries of the world were hit badly,  which from both social as well as economical lenses. Thus, to ensure economic stability and full employment, an agreement was signed at the United Nations Monetary and Financial Conference held in July 1944 at Bretton Woods in New Hampshire, USA.

This agreement led to the setting up of the International Monetary Fund (IMF) to deal with external surpluses and deficits of its member nations and the International Bank for Reconstruction and Development (popularly known as the World Bank) to finance postwar reconstruction. These were together called the Bretton Woods twins. The international monetary system was now based on the fixed exchange rate, where all the currencies were pegged to the US dollar and the US dollar was anchored to gold.

Ques.6: Imagine that you are an indentured Indian labourer in the Caribbean. Drawing from the details in this chapter, write a letter to your family describing your life and feelings.

Ans.6: Creative answer. DIY for students according to their perception and interpretation of the condition of the labourers.

Ques.7: Explain the three types of movements or flows within the international economic exchange. Find one example of each type of flow which involved India and Indians, and write a short account of it.

Ans.7: The three types of flows or movements within the international economic exchange are the flows of trade, labour, and capital.

Ques.8: Explain the causes of the Great Depression.

Ans.8: The causes of the Great Depression were as follows:

a) The agricultural sector witnessed huge overproduction of crops. This resulted in falling prices of the food grains, hence the agricultural income started to decline. In order to increase their incomes, farmers began producing more, which pushed the prices further down.

b) In the post-world war economy, the USA emerged as the international creditor. However, just as the situation became troublesome, USA withdrew all the loans from the international market, pushing all the dependent currencies into a severe crisis. The major currencies collapsed and major banks around the world were into deficit.

c) Domestic loans were slashed by the US government and the loans were called back. The agriculture and industrial sectors of the country were severely hit. The consumerist prosperity disappeared as people could no longer take new loans or repay the old ones. Ultimately, the US banking system collapsed, pushing the global economy into the Great Depression.

Ques.9: Explain what is referred to as the G-77 countries. In what ways can G-77 be seen as a reaction to the activities of the Bretton Woods twins?

Ans.9: G-77 or the Group of 77 was a group formed by the developing nations of the world that were former European colonies. These countries demanded a New International Economic Order (NIEO). The aims behind the formation of NIEO were

Even after gaining independence, these countries did not have access to their resources, and due to continuous oppression by the colonial masters, the social and economic conditions were getting worse in these countries. Now that these countries were independent, they faced the challenge to uplift their societies both economically and socially. During the same time, as the industrial powers rebuilt, they grew less dependent on the IMF and World Bank, and these institutions now shifted their attention to the developing nations. As these financial institutions now assisted the developing nations, these countries were now once again under the indirect control of their former colonies as these financial institutions were controlled by the major powers. Hence, G-77 can be seen as a reaction to the activities of the Bretton Woods twins.

1.1 The Idea of Satyagraha

2. Differing Strands within the Movement

2.1 The Movement in the Towns

2.2 Rebellion in the Countryside

2.3 Swaraj in the Plantations

3.1 The Salt March and the Civil Disobedience Movement

3.2 How Participants saw the Movement

3.3 The Limits of Civil Disobedience

4. The Sense of Collective Belonging

Important Terms Relevant for NCERT Solutions for Class 10 History Chapter 3 – The Making of a Global World :

Dissenter: They are the individuals who refuse to accept traditionally established beliefs and systems.

Indentured labour:A system of labour in which the labourers are hired on a contractual basis for a specific period of time, after the termination of which they can go back either to a new country or to their own homeland.

Tariff:The tax imposed on imports from other countries, during entry in some other country.

Exchange rates:The rates that link the currencies of different countries for international trade.

Flexible or Floating exchange rates:These exchange rates fluctuate depending on the supply of currencies in the international market. there is no intervention by the government and these completely depend on market forces.