NCERT Solutions for Class 10 History Chapter 2 Nationalism in India (Social Science), contains solutions to various questions in Exercise for Chapter 2.  At the end of the Solutions, all the keywords which are important to understand Nationalism in India Class 10 History, have been explained in a simple and easy to understand manner. We are providing NCERT Solutions for Class 10 all subjects which can be accessed by clicking here. 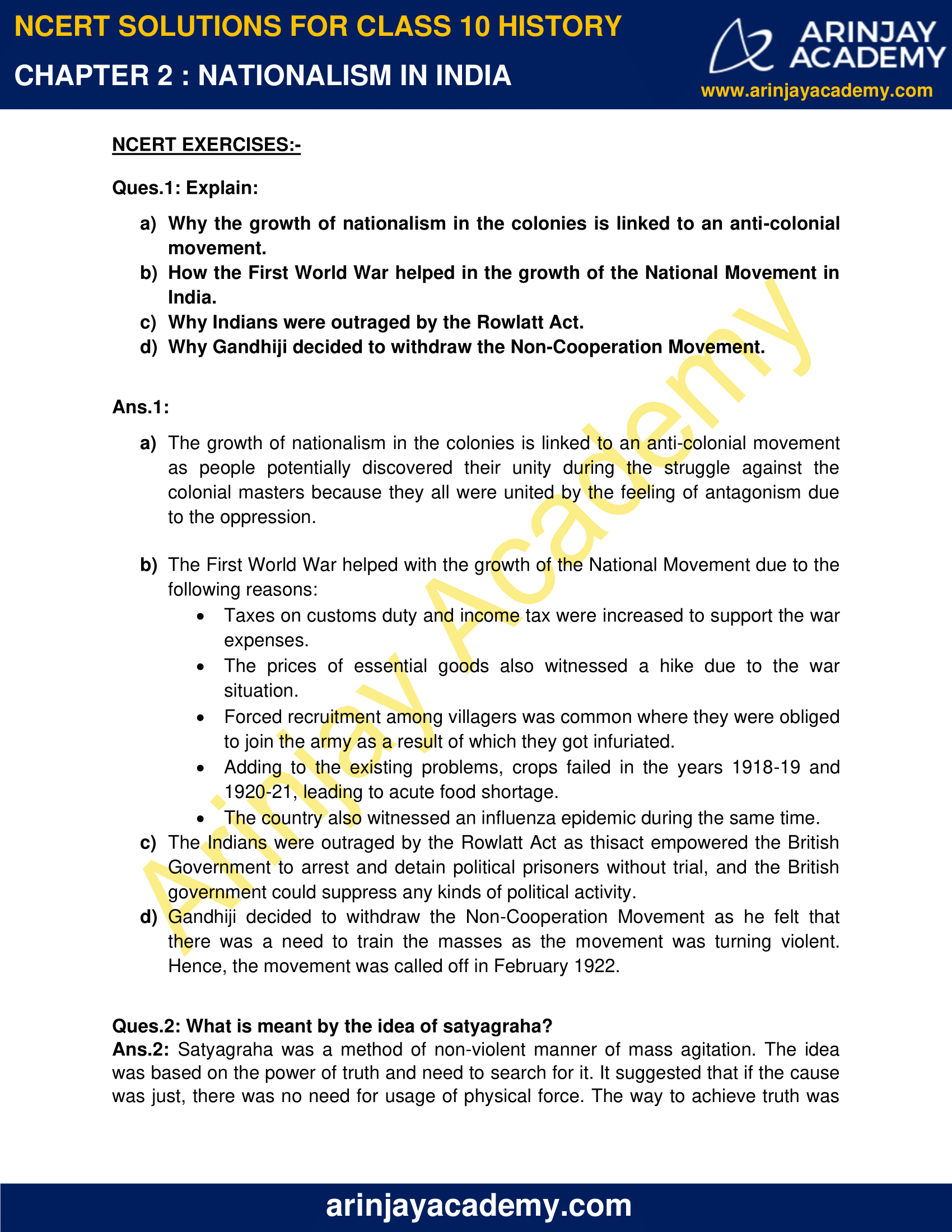 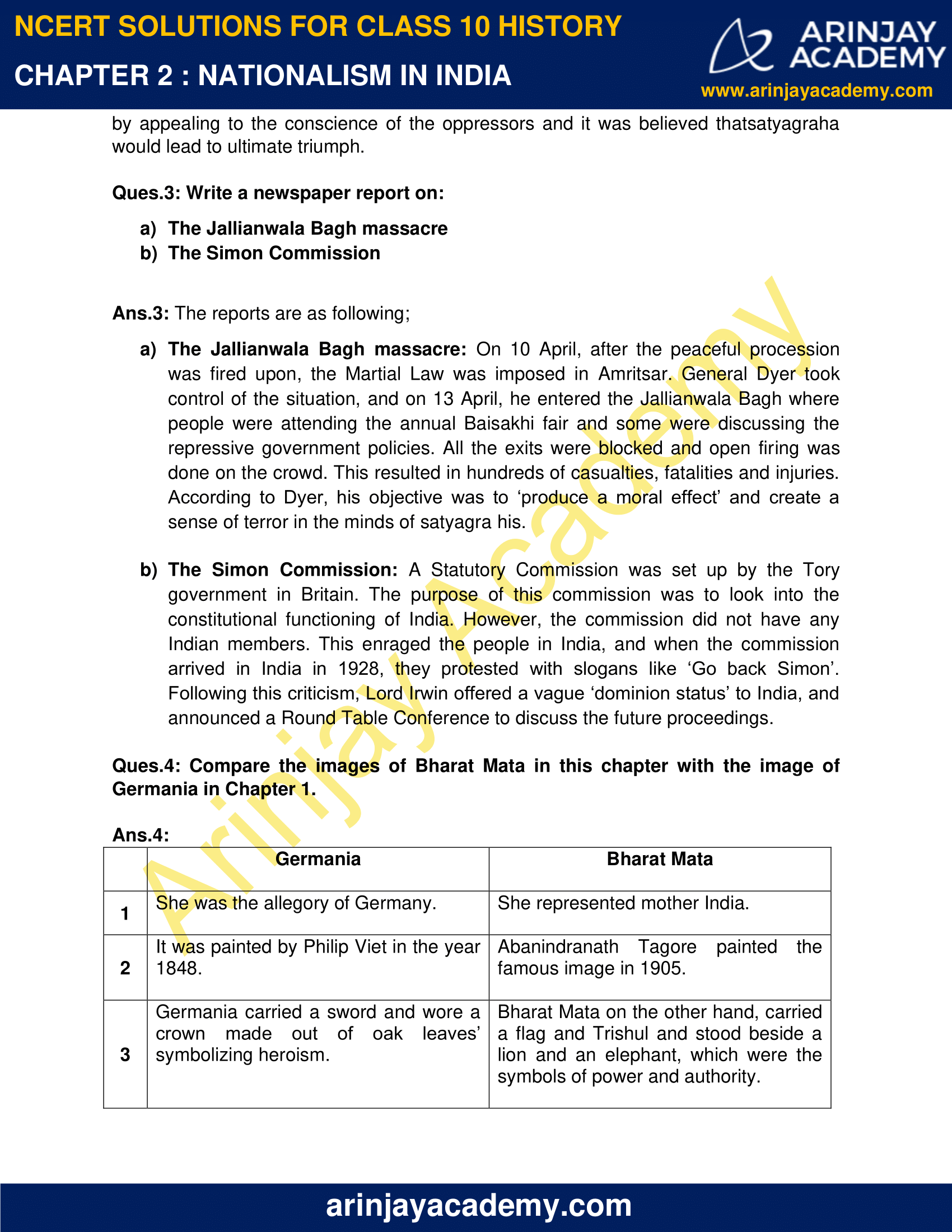 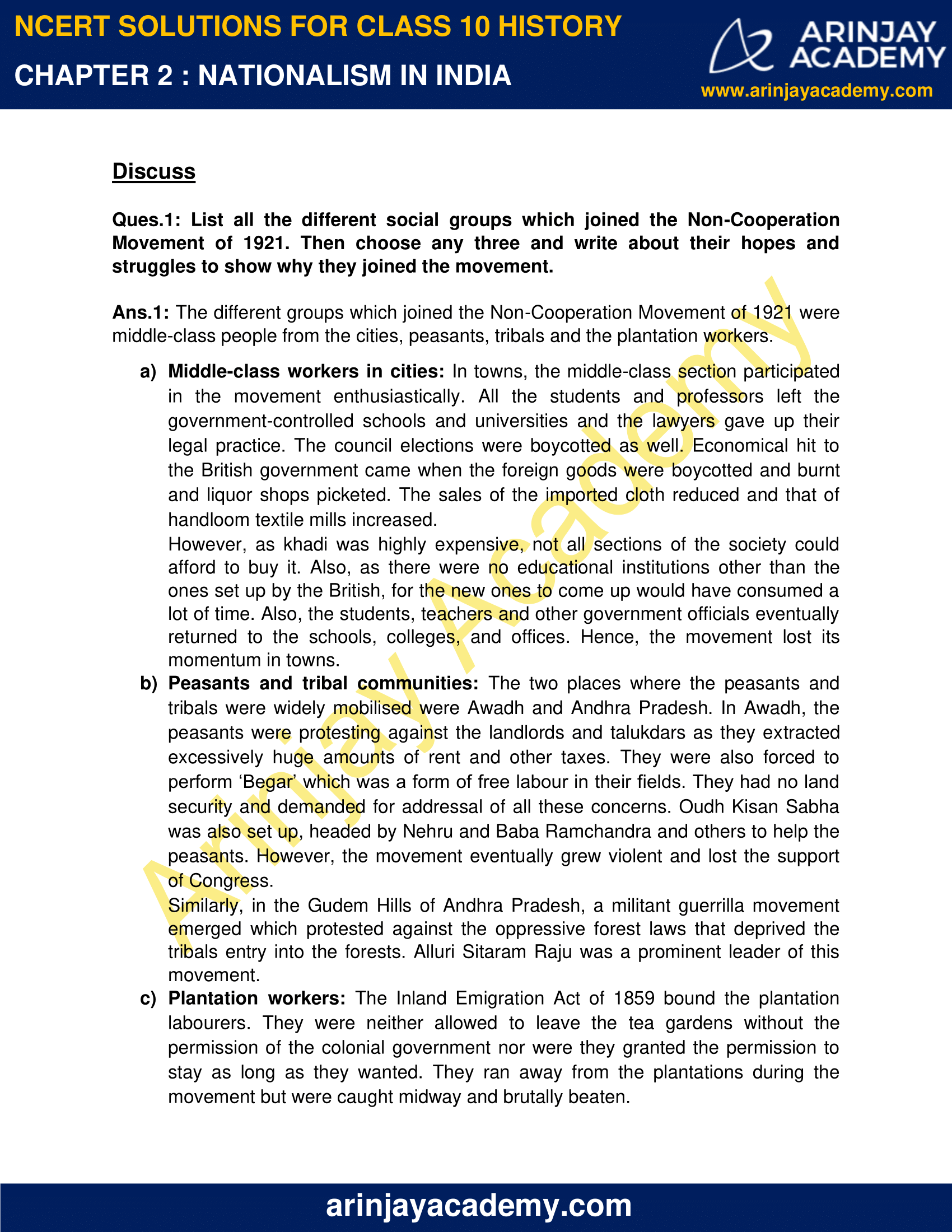 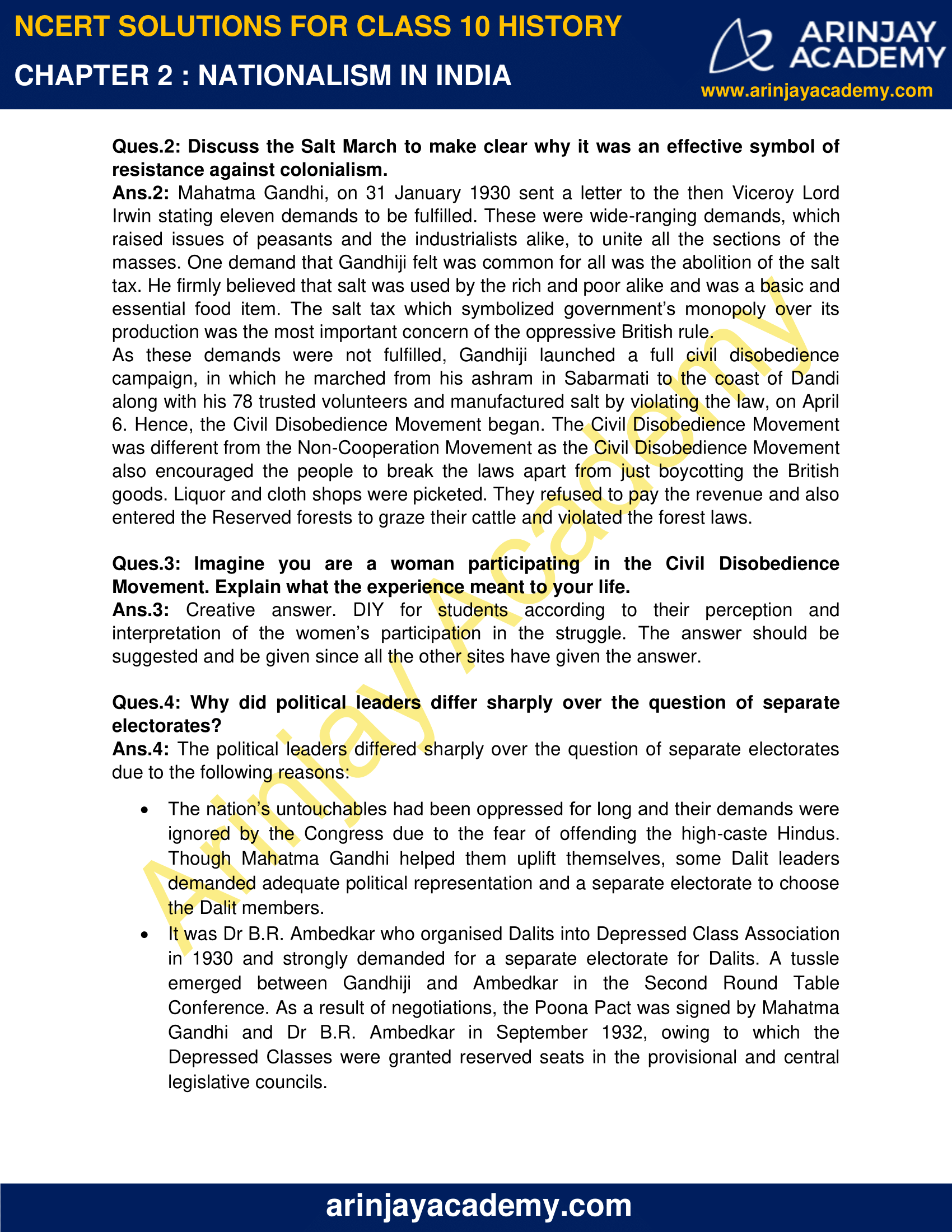 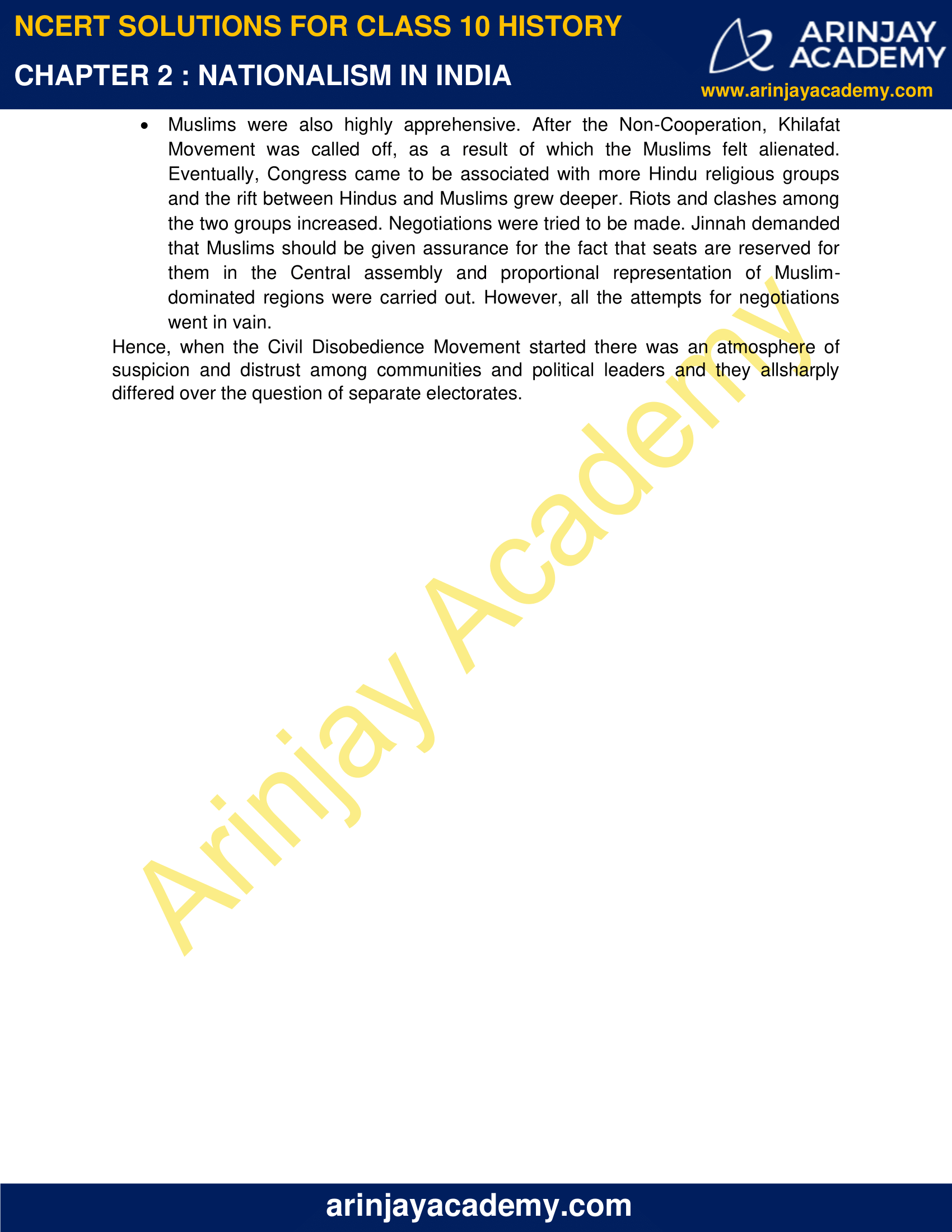 a) Why the growth of nationalism in the colonies is linked to an anti-colonial movement.
b) How the First World War helped in the growth of the National Movement in India.
c) Why Indians were outraged by the Rowlatt Act.
d) Why Gandhiji decided to withdraw the Non-Cooperation Movement.

a) The growth of nationalism in the colonies is linked to an anti-colonial movement as people potentially discovered their unity during the struggle against the colonial masters because they all were united by the feeling of antagonism due to the oppression.

b) The First World War helped with the growth of the National Movement due to the following reasons:

c) The Indians were outraged by the Rowlatt Act as this act empowered the British Government to arrest and detain political prisoners without trial, and the British government could suppress any kinds of political activity.

d) Gandhiji decided to withdraw the Non-Cooperation Movement as he felt that there was a need to train the masses as the movement was turning violent. Hence, the movement was called off in February 1922.

Ques.2: What is meant by the idea of satyagraha?

Ans.2: Satyagraha was a method of non-violent manner of mass agitation. The idea was based on the power of truth and need to search for it. It suggested that if the cause was just, there was no need for usage of physical force. The way to achieve truth was by appealing to the conscience of the oppressors and it was believed that satyagraha would lead to ultimate triumph.

Ques.3: Write a newspaper report on:

a) The Jallianwala Bagh massacre

b) The Simon Commission

Ans.3: The reports are as following;

a) The Jallianwala Bagh massacre: On 10 April, after the peaceful procession was fired upon, the Martial Law was imposed in Amritsar. General Dyer took control of the situation, and on 13 April, he entered the Jallianwala Bagh where people were attending the annual Baisakhi fair and some were discussing the repressive government policies. All the exits were blocked and open firing was done on the crowd. This resulted in hundreds of casualties, fatalities and injuries. According to Dyer, his objective was to ‘produce a moral effect’ and create a sense of terror in the minds of satyagraha.

b) The Simon Commission: A Statutory Commission was set up by the Tory government in Britain. The purpose of this commission was to look into the constitutional functioning of India. However, the commission did not have any Indian members. This enraged the people in India, and when the commission arrived in India in 1928, they protested with slogans like ‘Go back Simon’. Following this criticism, Lord Irwin offered a vague ‘dominion status’ to India, and announced a Round Table Conference to discuss the future proceedings.

Ques.4: Compare the images of Bharat Mata in this chapter with the image of Germania in Chapter 1.

Ques.1: List all the different social groups which joined the Non-Cooperation Movement of 1921. Then choose any three and write about their hopes and struggles to show why they joined the movement.

Ans.1: The different groups which joined the Non-Cooperation Movement of 1921 were middle-class people from the cities, peasants, tribals and the plantation workers.

a) Middle-class workers in cities: In towns, the middle-class section participated in the movement enthusiastically. All the students and professors left the government-controlled schools and universities and the lawyers gave up their legal practice. The council elections were boycotted as well. Economical hit to the British government came when the foreign goods were boycotted and burnt and liquor shops picketed. The sales of the imported cloth reduced and that of handloom textile mills increased.

However, as khadi was highly expensive, not all sections of the society could afford to buy it. Also, as there were no educational institutions other than the ones set up by the British, for the new ones to come up would have consumed a lot of time. Also, the students, teachers and other government officials eventually returned to the schools, colleges, and offices. Hence, the movement lost its momentum in towns.

b) Peasants and tribal communities: The two places where the peasants and tribals were widely mobilised were Awadh and Andhra Pradesh. In Awadh, the peasants were protesting against the landlords and talukdars as they extracted excessively huge amounts of rent and other taxes. They were also forced to perform ‘Begar’ which was a form of free labour in their fields. They had no land security and demanded for addressal of all these concerns. Oudh Kisan Sabha was also set up, headed by Nehru and Baba Ramchandra and others to help the peasants. However, the movement eventually grew violent and lost the support of Congress.

Similarly, in the Gudem Hills of Andhra Pradesh, a militant guerrilla movement emerged which protested against the oppressive forest laws that deprived the tribals entry into the forests. Alluri Sitaram Raju was a prominent leader of this movement.

c) Plantation workers: The Inland Emigration Act of 1859 bound the plantation labourers. They were neither allowed to leave the tea gardens without the permission of the colonial government nor were they granted the permission to stay as long as they wanted. They ran away from the plantations during the movement but were caught midway and brutally beaten.

Ques.2: Discuss the Salt March to make clear why it was an effective symbol of resistance against colonialism.

Ans.2: Mahatma Gandhi, on 31 January 1930 sent a letter to the then Viceroy Lord Irwin stating eleven demands to be fulfilled. These were wide-ranging demands, which raised issues of peasants and the industrialists alike, to unite all the sections of the masses. One demand that Gandhiji felt was common for all was the abolition of the salt tax. He firmly believed that salt was used by the rich and poor alike and was a basic and essential food item. The salt tax which symbolized government’s monopoly over its production was the most important concern of the oppressive British rule.

Ques.3: Imagine you are a woman participating in the Civil Disobedience Movement. Explain what the experience meant to your life.

Ans.3: Creative answer. DIY for students according to their perception and interpretation of the women’s participation in the struggle. The answer should be suggested and be given since all the other sites have given the answer.

Ques.4: Why did political leaders differ sharply over the question of separate electorates?

Ans.4: The political leaders differed sharply over the question of separate electorates due to the following reasons:

Hence, when the Civil Disobedience Movement started there was an atmosphere of suspicion and distrust among communities and political leaders and they all sharply differed over the question of separate electorates.

1.1 The Idea of Satyagraha

2. Differing Strands within the Movement

2.1 The Movement in the Towns

2.2 Rebellion in the Countryside

2.3 Swaraj in the Plantations

3.1 The Salt March and the Civil Disobedience Movement

3.2 How Participants saw the Movement

3.3 The Limits of Civil Disobedience

4. The Sense of Collective Belonging

Forced recruitment:A process through which the people were forced by the colonial government to join the army.

Boycott:A form of protest whereby certain things made by, foreigners were instructed to avoid in order to show a form of disobedience.

Picket:The act of blocking the entrance of a shop, office, or factory.

Begar:The labour contributed by the villagers without any payment.