You are here: Home / Archives for English Grammar 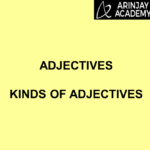 Adjectives are words that describe people, places and things.

a funny clown
a clean city
an old car

The little dog does clever tricks.
It is cute.

So we can say that adjectives are words that add to the meaning of noun or a pronoun.

These adjectives tell us about the quality or the kind of noun or pronoun.

The sums were easy.
We watched an exciting movie.

These adjectives answer the questions
How many?
How much?

Thirty children took part in the competition.
Please pour some tea for me.

Words like first, second and third are also adjectives of numbers.

They are also called ordinal adjectives.

My aunt will come in the third week of December.
The second girl in the queue is my friend.

Keep these books in the cupboard.
I got this pen on my birthday.

Distributive Adjectives are used to refer to each person or thing out of two or more people or things separately.

Each child got a chocolate
You could tell either story

Whose car is parked under the tree?
Which team won the match?

I cannot find my keys.
Meena is going to meet her friend. 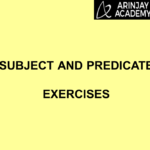 In the following sentences separate the subject and the predicate.

1) My garden has beautiful flowers.

2) Delhi is the capital of India.

3) Across the path lay a tree trunk.

5) On the top of the mountain lives a sage.

2. Subject – Delhi, Predicate – is the capital of India

3. Subject  – A tree trunk, Predicate – lay across the path.

5. Subject – A sage, Predicate – lives on top of the mountain. 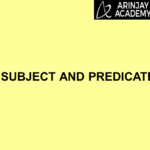 Every sentence consist of two parts Subject and predicate

Predicate – The part of the sentence that tells us something about the subject i.e the person or thing denoted by the subject is called a Predicate

1) The girls are playing together.

2) The old man was walking slow.

3) The earth goes around the sun.

Let us divide these sentences into Subject and Predicate

SUBJECT  – The girls
PREDICATE – are playing together

SUBJECT  – The earth
PREDICATE – goes around the sun

Note:- The Subject of a sentence usually come in the beginning, but occasionally it is put after the predicate.

Note:-  In Imperative or Command sentence the Subject is left out as

Come in (it is understood you come in)

Thank him (you thank him s implied) 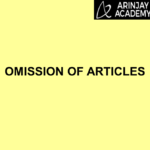 1. Before names of materials and abstract nouns.

Gold is an expensive metal.

2. Before plural nouns when they are used in general sense.

4. Article is omitted before languages, names of days, months and seasons.

5. ‘A’ is also omitted in certain phrases consisting of a preposition followed by an object.

6. Phrases consisting of a transitive verb followed by its object. 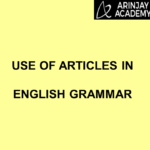 Use of Articles in English Grammar – Uses of “A”

1. Before a singular noun beginning with a consonant.

2. Words beginning with a consonant sound “yu” though it may begin with a vowel letter.

3. Words beginning with a “wa” sound , even though it may begin with a vowel letter.

We do not use ‘A’ before uncountable nouns like ink, water, milk, wood etc

Eg : – We drink water, milk is good for health

4. Use of “a” may also depend on the context in which it is used. For eg: ‘a’ is used before a countable noun which represents a class of things.

6. When we make a Common noun of a Proper noun.

Use of Articles in English Grammar – Uses of “An”

2. Before a word that does not begin with a vowel but has a vowel sound.

3. ‘An’ may also be used before individual letters spoken with a vowels sound.

Use of Articles in English Grammar – Uses of “the”

1. The is called a definite article because it points out some definite or particular person or thing.

3. When we speak of a particular person or thing or the one already mentioned, that is why it is called a definite article.

4. We use ‘THE’ when a noun which is singular in number but is meant to represent a whole class.

5. Before the names of things unique in their kind.

6. We use ‘The’ with those adjectives that are used as nouns.

7. ‘The’ is used with phrases that specify a person on object.

8. Before an adverb with comparatives.

9. Before a proper noun proceeded by an adjective.

10. Before a common noun to give it the meaning of an abstract noun. 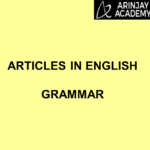 A, An and The are Articles in English Grammar

Articles are demonstrative adjectives and are used to point out people or things, so they are used before nouns. 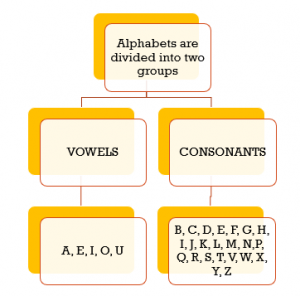 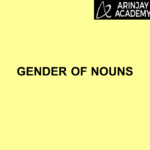 THERE ARE FOUR GENDER OF NOUNS

WAYS OF FORMING THE FEMININE OF NOUNS

There are three ways of forming the feminine of nouns.

I. By a change of word

II. By adding – ess to the Masculine

NOTE :- The following feminine are formed by adding -ess to the masculine after omitting the ‘vowel’ of the last syllable of the masculine.

By adding  -ess in a less regular way

III. By placing a word before or after

Some other Masculine and Feminine are

NOTE :- Collective nouns, even when they denote living beings, are considered of the Neuter Gender as Jury, Committee.

Animals and young children sometimes may be spoken of in the Neuter Gender.

Sometimes Objects without life are spoken of as if they were persons, then they may be regarded as male or females

2. Things remarkable for beauty, gracefulness and gentleness as regarded as females as the moon, the earth, nature, spring, charity etc.

The ship fought her way through the stormy waves.

REWRITE THE SENTENCES CHANGING THE GENDER OF THE NOUNS.

The nun played the part of the heroine.

Her aunt is a widow.

The landlord went to the temple to pray to the God.

The priestess led the queen to the castle.

A Noun is the name of person, place or a thing.

Reena is a clever girl.

Note: – It should be noted that when we say noun is a name of a thing, it means any object or an abstract idea we can think of  for eg: –
Honesty or childhood

There are five different kinds of nouns.

A proper noun is the name of some particular person or place.

For eg:- 1. Shobha lives in Mumbai.
2. Rama was the son of Dasharatha.

A common noun is a noun who is common to any and every person or thing of the same kind for eg:-

The boy lives in a village.

The girl went to meet her friend.

A collective noun is the name of a collection of persons or things spoken as a whole for eg: – crowd, army, class etc.

Note : – A distinction is generally made between a Collective Noun and a Noun of Multitude.

For eg :- When we say ‘ the Committee consists of twelve members’ here the collective noun ‘committee’ denotes one ‘ individual’ whole and hence the verb is singular but if we say ; “The Committee are quarrelling among themselves” here the Noun of Multitude denotes the individuals of the group and hence the verb is plural, although the noun is singular.

A noun of material denotes to matter or substance of which things are made of : as gold, silver, iron, glass, stone, cotton.

An Abstract noun is usually the name of a quality, action or state considered apart from the things to which it belongs.

Abstract noun is the noun of something that we can only think of as- hope doubt, greed, misery etc.

Another classification of Nouns is

Countable Nouns are the names of objects, people etc. that we can count.

Uncountable Nouns are the names of things which we cannot count.

While Uncountable Nouns do not have plural form like

Milk cannot be said as milks.