You are here: Home / Archives for what to produce in economics

what to produce in economics 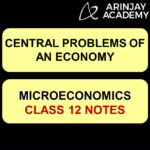 Production, distribution and disposition of goods and services are the basic economic activities of life. In the course of these activities, every society has to face scarcity of resources. Due to the scarcity every society has to decide how to allocate the scarce resources. If one looks at the question of What are the central problems of an economy ,  they are as under :-

These problems are called central problems because these are the most basic problems of an economy and all other problems revolve around them.

Allocation of resources refers to the problem of assigning the scarce resources in such a manner so that maximum wants of the society are fulfilled. As resources are limited in relation to the unlimited wants, it is important to economize their use and utilize them in the most efficient manner.

The problem of allocation of resources is studies under 3 heads:-

(i)  What to produce

(ii)  How to produce

(iii) For whom to produce

Central problems of an economy – Problem 1 – What to produce ?

Every economy has limited resources and thus cannot produce all the goods. More of one good or service usually means less of others.

The problem of “What to produce” has two aspects.

(i) What possible commodities to produce : An economy has to decide, which consumer goods (rice, wheat, clothes etc.) and which of the capital goods (machinery, equipments etc.) are to be produced. In the same way, economy has to make a choice between civil goods (bread, butter etc.) and war goods (guns, tanks etc).

(ii) How much to produce:- After deciding the goods to be produced, It means, it involves a… regarding the quantity to be produced, of consumer and capital goods, civil and war goods and soon.

Central problems of an economy – Problem 2 – How to produce ?

This problem refers to selection of technique to be used for production of goods and services. A good can be produced using different techniques of production. By ‘technique’ we mean which particular combination of inputs to be used.

Generally, techniques are classified are

In Labour Intensive technique, more labour and less capital (in the form of machines etc.) is used.

In Capital Intensive technique, there is more capital and less labour utilization. For example, textiles can be produced either with a lot of labour and a little capital or with less labour and more capital. Availability of factors and their relative prices helps in determining the technique to be used. The selection of technique is made with a view to achieve the objective of raising the standard of living of people and to provide employment to everyone.

For example, in India, LIT is preferred due to abundance of labour, whereas countries like USA, England etc. prefer CIT due to shortage of labour and abundance of capital.

Central problems of an economy – Problem 3 – For whom to produce ?

This problem refers to selection of the category of people who will ultimately consume the goods i.e. whether to produce goods for more poor and poor. Since resources are scarce in every economy, no society can satisfy all the wants of its people. Thus a problem of choice arises. Goods are produced for those people who have the paying capacity. The capacity of people to pay for goods depends upon their level of income. It means this problem is concerned with distribution of income among the factors of production (land, labour, capital and enterprise), who contribute in the production process. The problem can be categorized under two main heads:-

(i) Personal distribution:- It means how national income of an economy is distributed among different groups of people.

(ii) Functional distribution: –  It involves deciding the share of different factors of production in the total national product of the country.

Opportunity Cost : – Opportunity cost is the cost of next best alternative foregone. For example, suppose we are working in a bank at the salary of ₹ 40,000 per month. Further suppose, we receive two more job offers.

Suppose we have ₹ 20,000 and we want to produce one computes and a LCD TV. With ₹ 20,000 only in hand, we cannot have both. We can either buy computer or LCD TV. If we decide to purchase computer, then opportunity cost of choosing the computer is the cost of the foregone satisfaction (from LCD TV). This example clearly demonstrates a fundamental economic condition, as our resources are limited, we are always forced to make choices between alternate commodities.