You are here: Home / Archives for Water Class 7 Questions 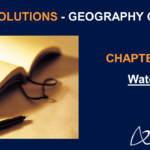 (i) What is precipitation?

When the water vapour reaches the dew point and condenses, precipitation occurs within the cloud and falls under the force of gravity. The main forms of precipitation include : –

(ii) What is water cycle?

Answer – Water cycle,  is a continuous phenomenon . It describes the following : –

(iii) What are the factors affecting the height of the waves?

(iv) Which factors affect the movement of ocean water?

Answer – The ocean water moves from one place to the other horizontally as well as  vertically.  The factors affecting movement of ocean water  are as under :

(v) What are tides and how are they caused?

The tides are caused by the gravitational attraction of the sun and moon which exerts force on the water bodies and causes a bulge of water on that area causing high tides.

(vi) What are ocean currents?

Answer – Ocean currents are streams of horizontal and vertical movements of the water masses that is produced by gravity, wind friction, and water density variation in different parts of the ocean. The ocean currents may be warm or cold

(i) Ocean water is salty. The main source of water in the oceans are rivers which carry sediments, minerals, soil and other particles from the mountains and plain lands. When these rivers discharge themselves in the sea, they also pour the minerals and rocks which contain several salts giving the ocean water a salty taste.

(i) The process by which water continually changes its form and circulates between oceans, atmosphere and land
(a) Water cycle
(b) Tides
(c) Ocean currents