You are here: Home / Archives for Revenue curve under monopoly 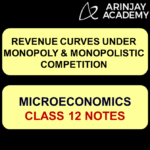 Monopoly refers to a market situation where there is a single seller selling a product which has no close substitutes. In monopoly, there is a single seller and the product that he sells has no close substitutes. There is also restriction on the entry and exits into the industry. This enables the monopolist to set his own price or charge different prices from different sets of consumers at the same time. Therefore, in a monopoly, the firm is a price maker.

Monopolistic Competition refers to a market situation in which there are large number of firms which sell closely related but differentiated products. Markets like soap, toothpaste, AC etc. are examples of monopolistic competition. Buyers of a product differentiate between the same product from different firms. Therefore, they are also willing to pay different prices. Thus, the firm or the seller has partial influence on price.

Under imperfect competition, a firm follows its own pricing policy. Monopoly and monopolistic competition fall under the category of imperfect competition. However, the firm can increase its sales only by decreasing the price. When firms can increase their sales only by decreasing the price of the product, the AR falls with increase in sale. It means that revenue from each additional unit, i.e. MR, will be less than AR. As a result, both AR and MR curves slope downwards. 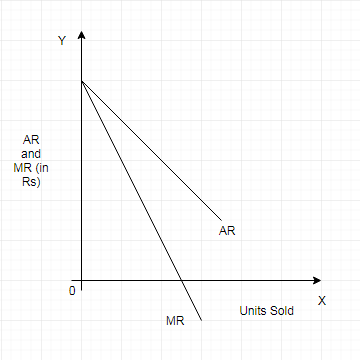 As we can see in the above schedule and graph, both AR and MR fall with increase in the number of outputs sold. However, the fall in MR is double than that in AR. In other words, MR falls at a rate twice the rate of fall in AR. As a result, the MR curve is steeper than the AR curve because MR is concerned with one unit, whereas AR is derived from all the units of output sold. This leads to a comparatively lesser fall in AR than the fall in MR.It must also be noted that MR can fall to zero and further fall to become negative, whereas AR can never be zero or negative since TR is always positive.

In other words, if the price of a commodity is increased, under monopolistic competition, the consumers can turn to close substitutes of that commodity for lower prices, therefore the fall in demand is higher. Whereas under monopoly, the consumers do not have any substitutes and have to buy the commodity at the price decided by the producer, therefore the fall in demand is not as much as that in monopolistic competition. 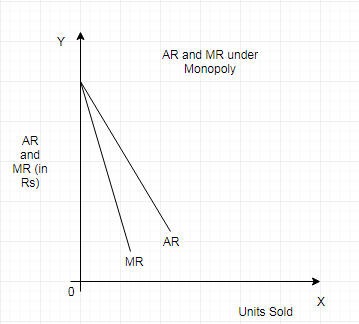 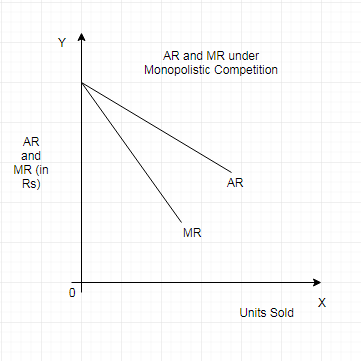