You are here: Home / Archives for real numbers 10th class 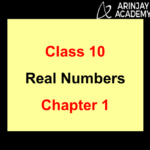 Real Number Class 10 Maths, deals with various concepts which are as under:-

Euclid’s division Algorithm is  a technique to compute the Highest Common Factor (HCF) of two given positive Integers.

For 2 positive integers a and b, there exist unique integers q and r, which satisfy

Square root of 3 is irrational