You are here: Home / Archives for primary functions of money 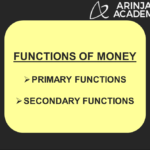 All the difficulties of barter were overcome with the introduction of money. Money is defined as anything that is generally acceptable as a means of exchange and that at the same time acts as a measure and as a store of value. An important point about this definition is that it regards anything that is generally acceptable as money. Thus, money includes coins, currency notes, cheques, Bills of Exchange, and so on. It is not always easy to define money. That is why Prof. Walker has said that money is that which money does. By this, he refers to the functions of money. Money performs many functions in a modern economy.