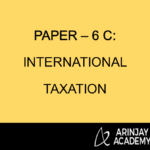 To develop an understanding of the concepts, principles and provisions relevant to international taxation and acquire the ability to apply such knowledge to make computations and address issues in practical case scenarios.

2 Other Provisions relating to taxation of international transactions and nonresident taxation under the Income-tax Act, 1961
(i) Non-resident Taxation (including Source Rule of Taxation)
(ii) Double Taxation Relief
(iii) Advance Rulings

3. Law and Procedures under the Black Money (Undisclosed Foreign Income and Assets) and Imposition of Tax Act, 2015 – An Overview.