You are here: Home / Archives for Our Country India Class 6 Questions and Answers 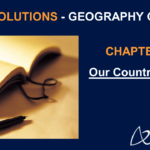 (a) Name the major physical divisions of India.

Answer: The major physical divisions of India are:

(b) India shares its land boundaries with seven countries. Name them.

Answer: Seven different Countries share borders with India, they are

(c) Which two major rivers fall into the Arabian Sea?

Answer: Narmada and Tapi are the two rivers which fall into the Arabian Sea.

(d) Name the delta formed by the Ganga and the Brahmaputra.

Answer: The Ganga-Brahmaputra Delta or the Bengal Delta are formed by the two great rivers Ganga and the Brahmaputra.

(e) How many States and Union Territories are there in India? Which states have a common capital?

Answer: India is a democratic country with 29 states and seven union territories in India.

Punjab and Haryana are the two Indian states having common Capital Chandigarh.

(f) Why do a large number of people live in the Northern plains?

(g) Why is Lakshadweep known as a coral island?