You are here: Home / Archives for Our Changing Earth Class 7 Notes 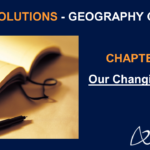 (i) Why do the plates move?

Answer – Plates on the surface of the earth move because of the intense heat produced by the Earth’s core. This heat causes convection cells in the mantle which in turn heats up the SIAL and SIMA layers. To distribute the heat and pressure evenly the plates on the surface move in a convergent and divergent manner.

(ii) What are exogenic and endogenic forces?

Answer – Exogenetic forces are those which occur on the surface of the earth and can be easily noticed, for example, Weathering, mass wasting, erosion and deposition.

Endogenetic forces on the other hand, are those which occur within the earth’s surface and lead to a change in the structures of the earth either horizontally or vertically, examples: folding and faulting, earthquakes and volcanism,

(iii) What is erosion?

Answer – Erosion is the gradual wearing away of rocks from the surface from one area and being transported to another area. The main agents of erosion are, rivers, winds, glaciers and tides. Valleys, mushroom rocks, Cliffs are examples of erosional landscapes.

(iv) How are flood plains formed?

Answer – Flood plains are formed when the river due to excessive water either from the rain or any other physical barrier in its path spills along its bank. The sediments carried by the river which is mostly alluvium, gets deposited on either sides of the bank and gradually form raised platforms beside the river. These are known as flood plains.

(v) What are sand dunes?

Answer – Sand dunes are heaps of sand found either in the desert or near the beaches which are formed due to the transportation and depositional action of the winds. The sand dunes usually are pyramidal in shape and can extend over hundreds of kilometres.

(vi) How are beaches formed?

Answer – Beaches are formed by the depositional action of waves and tides. They deposit sand, pebble and gravel along the shoreline which slowly dets layered and forms into beaches.

(vii) What are ox bow lakes?

(i) Which is not an erosional feature of sea waves?
(a) Cliff
(b) Beach
(c) Sea cave

(ii) The depositional feature of a glacier is:
(a) Flood plain
(b) Beach
(c) Moraine

(iii) Which is caused by the sudden movements of the earth?
(a) Volcano
(b) Folding
(c) Flood plain

(iv) Mushroom rocks are found in:
(a) Deserts
(b) River valleys
(c) Glaciers

(i) Some rocks have a shape of a mushroom: Mushroom rocks are found in the deserts and form when the wind velocity is higher in the lower surface of the rock eroding the rock from all around and forming a pillar like structure. While the upper part of the rock remains less altered. The velocity of winds are higher near the surface of the deserts.

(ii) Flood plains are very fertile. This is because, the rivers deposit new alluvium each year when they overflow its banks and submerge the flood plains with new sediments and minerals brought down from the mountains.

(iii) Sea caves are turned into stacks. Due to continuous erosion by the waves and wind action, the sea caves are slowly eroded into single standing pillars known as stacks that are found in the rocky beach landscapes.

(iv) Buildings collapse due to earthquakes. Earthquakes are sudden movements which occur within the earth and has tremendous effects on the surface. The high frequency vibrations which are released from the focus of the earth quakes lead to a disbalance in the structures over the surface and thus buildings or any other structures collapse.