You are here: Home / Archives for Newton’s Law of Universal Gravitation 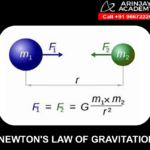 Sir Isaac Newton’s Universal Law of Gravitation can be applied both at cosmic level and atomic level. It follows inverse square law of force.

In daily life we observe things falling from a height. We often drop a pen or a pencil. A ball thrown up comes down. Isaac Newton saw an apple falling from a tree. He thought why not the apples go up?

The invisible force that attracts an apple towards the earth led to the idea of gravitation.

In the solar system, the planets go around the sun due to gravitation. In general, every object in the universe attracts every other object with a force.

Let A and B be two objects having masses m1 and m2. Let the distance of separation be‘d’. Then the force of attraction F between the two objects is 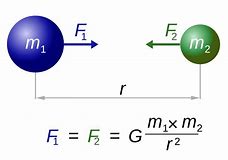 Henry Cavendish, a British Scientist, by experimental methods determined the

Importance of Universal Law of Gravitation

The Universal Law of Gravitation explains;

What is Free Fall?

When you just drop a stone from a height it is attracted by the earth’s gravity. The velocity of the body increases as it travels downward. This produces acceleration.

Acceleration due to gravity of earth is approximately 9.8 m/s2 and that of moon is one-sixth of earth.

Let the mass of earth be M and that of the object be m.

Acceleration due to gravity on earth

Replacing d with R, the radius of the earth

Substituting these values in

For calculation purposes usually g value is rounded off to 10 m/s2.