You are here: Home / Archives for NCERT Solutions for Class 6 Geography Chapter 6 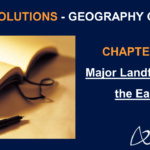 (a) What are the major landforms?

Answer: The major landforms of the earth are:

(b) What is the difference between a mountain and a plateau?

Answer: The difference between mountain and plateaus are listed in the table below:

(c) What are the different types of mountains?

Answer: There are three different types of mountains:

(d) How are mountains useful to man?

Answer: Mountains are useful to man in many ways:

(e) How are plains formed?

Answer: Plains are level land formed mostly due to the deposition of silt and clay carried down by the rivers.

(f) Why are the river plains thickly populated?

Answer: Plains are the most thickly populated area of the world as it is the most fertile area, agriculture is the main occupation of people in the plains. The climate in the plains is also pleasant.

(g) Why are mountains thinly populated?

Answer: The mountains are thinly populated because:

i. In the mountainous regions the climate is too cold for people to stay.
ii. The rugged terrain of the mountain is unsuitable for living.

1. A plain is an unbroken flat or a low-level land.
2. The Himalayas and the Alps are examples of Young fold mountains types of mountains.
3. Plateau areas are rich in mineral deposits.
4. The range is a line of mountains.
5. The plain areas are most productive for farming.