You are here: Home / Archives for ncert Biology class 11 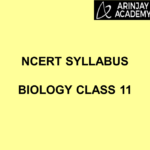 I. Diversity in Living World

Systematics and binomial system of nomenclature.

• The meaning of being ‘alive’.
• Living organisms show a very large diversity in form and structure ranging from unicellular to very large multicellularwell-differentiated bodies.
• For ease of study, they have been organized into categories and this is called classification.
• Principally, all living organisms can be placed in one or the other of five kingdoms.
• Each kingdom is further subdivided; there are several levels of organisation, the lowest in the hierarchy being the species.
• The Binomial system, literally ‘two names’, of classification is followed, where each organism has a Latin generic name with a specific epithet.
• Zoological parks, Botanical gardens, Herbaria and Natural museums serve as Taxonomical aids.

Practicals
Study the large variation of living organisms in the neighbourhood, note their behaviour, characteristics, and categorize them into groups based on some common features. Study preserved specimens, at least one representative of each group, to understand correlations between the characteristics of organisms and their systematic position. Learn how to collect, press, dry and prepare plant specimens with labels (common and weedy species) for the
herbarium/museum.

Tissues in animals and plants.

Morphology, anatomy and functions of different systems of an annelid (earthworm), an insect (cockroach) and an amphibian (frog).

• Light and electron microscopes are used as tools for the study of tissues, cells and cell organelles.
• Higher organisation of animals and plants is achieved through assembly of thousands/millions of cells into specialised tissues that in turn form organs and organ systems.
• The organisation of the living body shows division of labour.
• Organisms show increasing complexity in structure and function as we move from the lower to the higher levels.
• Plants and animals exhibit a wide range of organisation from a simple level to the complex.
• Floral characteristics form the basis of classification and identification of Angiosperms. This can be illustrated through semi-technical descriptions of families using suitable examples of wild and cultivated plants.
• The structure of the animal body shows a wide range in morphology and anatomy.

Practicals
Study different types of tissues in plants and animals (temporary preparations and permanent slides). Prepare and study transverse section of roots and stems to identify different tissues. Study of locally available plants and animals for their external morphology. Description of three common flowering plants in semi-technical terms (Solanaceae, Fabaceae and Liliaceae) and try to group them based on flower characteristics. Study the anatomy of roots, stems (through hand sections) and leaves (through permanent slides). Study of one vertebrate and one invertebrate for their morphology and internal organisation (through charts and models).

• The cell organelles are designed to perform tasks such as synthesis, breakdown, respiration and transport.
• Essential processes of cell division – mitosis and meiosis are similar in animals and plants.
• Living bodies contain different categories of micro and macro-molecules.
• Macromolecules are of four broad categories.
• Proteins, the major macro group besides providing structural support, mediate many physiological functions like catalysis, defence, transport, and sensing.
• Enzymes are an important class of proteins responsible for all metabolic activities of the cell.
• Carbohydrates are major energy reserves, and also serve the function of providing structural support to majority of living organisms.
• Lipids serve as major components of membranes, as energy reserves and some hormones.
• The DNA has a double helical structure.
• Nucleic acids are the genetic material, and are responsible for determining the protein synthesis.

Practicals
Observe suitable animal and plant cells (sections and smears) to highlight similarities and differences. Study of mitosis in onion root tip and animal cells (permanent slides). Test for carbohydrates (glucose and starch), proteins and fats, and their detection in suitable plant and animal materials. Study the activity of the enzyme amylase/ trypsin/ papain (using milk powder as substrate).

• Cell to cell movement of water, food, gas and nutrients is dependent principally on concentration gradients and diffusion.
• Substances are moved against a concentration gradient through active transport.
• The plants lose water through their stomata.
• Transport of water over larger distances in plants depends on transpiration pull.
• Root pressure is responsible for movement of water up short distances and for guttation.
• Plants require a variety of mineral nutrients for their growth and development.
• Some plants are able to fix atmospheric nitrogen.
• Green plants use the C3 pathway to fix carbon dioxide and synthesize simple sugars in the presence of sunlight.

• Some plants have the C4 pathway.
• Sugars are oxidised by all living organisms to release energy.
• Some organisms derive energy from food anaerobically.
• This energy is trapped as ATP and utilised for all metabolic activities.
• Growth regulators regulate growth and development in plants.

• Food is broken down enzymatically in stages and nutrients absorbed as they pass through the alimentary canal.
• The process of exchange of gases takes place at organ, tissue, cell and organelle levels leading to oxidation of sugars in the cells.
• Gases, nutrients as well as waste products are transported in the body through the vascular system.
• The various components of the blood are involved in diverse functions.
• Metabolic wastes produced in the body are eliminated by excretory system.
• The kidneys play an important role in osmoregulation.
• Movement and locomotion involves interaction of the skeletal and muscular system; the skeleton also protects many parts of the body.
• Control and coordination require functional integration of neural and endocrine systems in the body.
• Sense organs are specialised to receive different stimuli and transmit them to the brain.

Practicals
Study diversity of food habits in different parts of the country and discuss the sources of carbohydrates, proteins, fats and other nutrients. Test different food items for macro-nutrients. Effect of temperature and pH on activity of salivary amylase. Study of permanent slides of human blood cells. Testing urine for urea and sugar. Study of the human skeleton, types of joints.