You are here: Home / Archives for maths ncert syllabus for class 12 maths 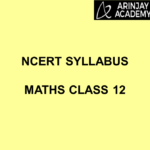 Unit I: Relations and Functions

Types of relations: Reflexive, symmetric, transitive and equivalence relations. One to one and onto functions, composite functions, inverse of a function. Binary operations.

Determinant of a square matrix (up to 3 × 3 matrices), properties of determinants, minors, cofactors and applications of determinants in finding the area of a triangle. Adjoint and inverse of a square matrix. Consistency, inconsistency and number of solutions of system of linear equations by examples, solving system of linear equations in two or three variables (having unique solution) using inverse of a matrix.

Applications of derivatives: Rate of change, increasing/decreasing functions, tangents and normals, approximation, maxima and minima (first derivative test motivated geometrically and second derivative test given as a provable tool). Simple problems (that illustrate basic principles and understanding of the subject as well as real-life situations).

Integration as inverse process of differentiation. Integration of a variety of functions by substitution, by partial fractions and by parts

4. Applications of the Integrals

Applications in finding the area under simple curves, especially lines, arcs of circles/parabolas/ ellipses (in standard form only), area between the two above said curves (the region should be clearly identifiable).

Through a variety of examples related to mathematics and already familiar to the learner, bring out different kinds of proofs: direct, contrapositive, by contradiction, by counter-example.

Modelling real-life problems where many constraints may really need to be ignored (continuing from Class XI). However, now the models concerned would use techniques/results of matrices, calculus and linear programming.