You are here: Home / Archives for Inside Our Earth Class 7

Inside Our Earth Class 7 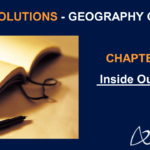 (i) What are the three layers of the earth?

The three layers of the earth are:

The earth’s outermost layer or the crust is made up of the lithosphere, which consists of various types of rocks. Rocks are therefore mineral mater which maybe formed due to various reasons millions of years ago. Rocks can be divided into various classes depending on its size, colour, hardness, composition as well as texture.

Rock’s on the earth’s surface are classified based on their mode of origin. They are:

(iv) How are extrusive and intrusive rocks formed?

(v) What do you mean by a rock cycle?

Rock cycle is the transformation of one type of rock into another after millions of years. The igneous rocks are known as the primary rocks as they are formed primarily out of volcanic substance, this type of rock may after millions of years be eroded by river and transported over a layer of sandstone to form a sedimentary rock. This sedimentary rock which is also known as a secondary rock, may under intense pressure after another 100 million years be converted to metamorphic rock. This cycle goes on and is extremely important for geographers and geologists who study rocks.

(vi) What are the uses of rocks?

Rocks are very useful to us because :

◆ rocks are of great resource value, they have various minerals stored within it which may have precious stones.

◆ Soils are derived from weathering of rocks.

◆ Rocks are used for building walls of houses, for paving roads and other solid structures like bridges, wells dams.

(vii) What are metamorphic rocks?

The Greek word ‘metamorphose’ means a “change in structure or form”. These types of rocks are not formed naturally but are converted from either the igneous rocks or the sedimentary rocks under great pressure or intensive amounts of heat.

(iii) Gold, petroleum and coal are examples of
(a) Rocks
(b) Minerals
(c) Fossils

(iii) Limestone is changed into marble:  Limestone is a sedimentary rock whivh is metamorphosed to marble due to extreme compression by the overlying layers. The particles are tightened and hardened to form marble which is an extremely hard rock.