You are here: Home / Archives for explain balance of payments 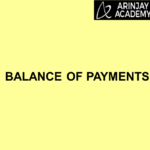 Meaning of Balance of payment:

Balance of payment(BoP) is an accounting statement which records economic transactions between Normal Resident of a specific country with the rest of the world.

It is a double entry system, which means it compromises of debit and credit.

In this we ‘Credit’ All Incomes and Gains.

‘Debit’ All Expenses and Loses.

In an ideal scenario, BoP should be zero, but it rarely happens.

Current Account records the flow of goods and services between the countries during a given period of time. It consists of :

It records the imports and exports of visible items which in most of the cases are goods. These items can be touched, seen and measured.

It means those items which are intangible i.e it can’t be seen or felt. Eg Shipping, Banking, Insurance etc are part of invisible items.

Income Receipts include Rent, Interest, Dividend, Wages etc received from or paid to the rest of the world.

It means one-sided transfers. It can be in the forms of remittances, donations, gifts etc. Eg A person living in Germany sends money to his family in India.

Foreign Aid received from other countries are also a part on unilateral transfers.

It is the account which records change in assets and liabilities of normal resident with the rest of the world. It accounts for change in non financial assets, like borrowings from UN or from the other countries etc. It includes:

Since it is such a large account. It’s not always possible to record all the transcations in an accurate manner. So Errors and Omissions act in BoP as balancing items.