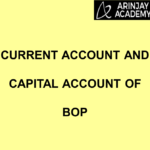 The balance of payment comprises of two accounts:

On the other hand, capital account records transactions relating to purchase and sale of foreign assets and foreign liabilities of a country with the rest of the world.

Current account deals with goods and services as against capital account which deals with changes in assets and liabilities of a country with the rest of the world.

Current Account records the flow of goods and services between the countries during a given period of time. It consists of :

It records the imports and exports of visible items which in most of the cases are goods. These items can be touched, seen and measured.

The import and export of visible items is often known as ‘Balance of Trade’.

It means those items which are intangible i.e it can’t be seen or felt. Eg Shipping, Banking, Insurance etc are part of invisible items.

Income Receipts include Rent, Interest, Dividend, Wages etc received from or paid to the rest of the world.

It means one-sided transfers. It can be in the forms of remittances, donations, gifts etc. Eg A person living in Germany sends money to his family in India.

Foreign Aid received from other countries are also a part on unilateral transfers.

It is the account which records change in assets and liabilities of normal resident with the rest of the world. It accounts for change in non financial assets, like borrowings from UN or from the other countries etc. It includes: