You are here: Home / Archives for CA Inter Income Tax MCQs – Income From Other Sources 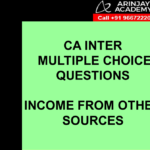 Which of the following conditions need to be satisfied, so that an income can be taxed under the head “Income from Other Sources” ?

a) Assessee has an income

b) Income should not be tax exempt

d) All of the above

a) Only on accrual basis

b) Only on cash basis

c) Accrual or cash basis, whichever is more beneficial to him

d) None of the above

As per Section 56(2), which of the following income are not chargeable to tax under the head “Income from Other Sources” ?

a) Occasional one time gains derived from sale of capital asset

b) Winning from lotteries, crossword puzzles and races including horse races.

SunSun India Private Limited, an Indian company, declared dividend amounting to Rs. 5,00,000 out of which 50% were received by Sumit. He wants to claim deduction of Rs. 50,000 against dividend income. The taxable income in the hands of Sumit would be Rs. _________

a) Collection charges paid to banker

b) Interest on money borrowed to make such Investments