NCERT Solutions for Class 8 Science Chapter 15 Some Natural Phenomena, contains solutions to various questions in Exercise for Chapter 15.  At the end of the Solutions, all the keywords and Notes which are important to understand Science Chapter 15 Some Natural Phenomena, have been explained in a simple and easy to understand manner. We are providing NCERT Solutions for Class 8 all subjects which can be accessed by clicking here. 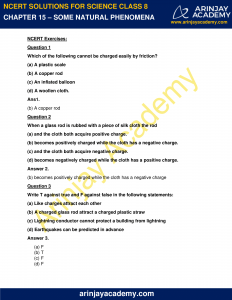 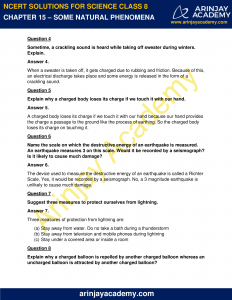 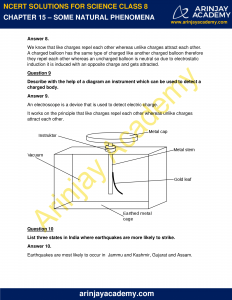 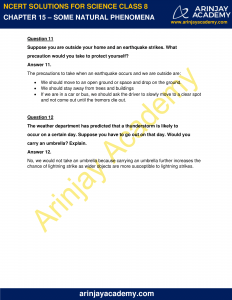 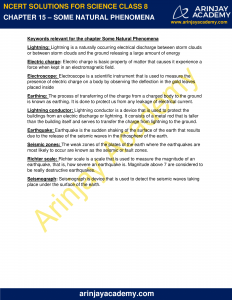 NCERT Solutions for Class 8 Science Chapter 15 – Some Natural Phenomena, Exercises includes – Choose the correct option , True or False, and Questions/Answers  which helps you to understand the topic covered in Some Natural Phenomena Class 8, in a better manner to help you to score good marks in your examinations.

Which of the following cannot be charged easily by friction?

(a) A plastic scale

(a) and the cloth both acquire positive charge.

(b) becomes positively charged while the cloth has a negative charge.

(c) and the cloth both acquire negative charge.

(d) becomes negatively charged while the cloth has a positive charge.

(b) becomes positively charged while the cloth has a negative charge

Write T against true and F against false in the following statements:

(b) A charged glass rod attract a charged plastic straw

(d) Earthquakes can be predicted in advance

Sometime, a crackling sound is heard while taking off sweater during winters. Explain.

When a sweater is taken off, it gets charged due to rubbing and friction. Because of this, an electrical discharge takes place and some energy is released in the form of a crackling sound.

Explain why a charged body loses its charge if we touch it with our hand.

Name the scale on which the destructive energy of an earthquake is measured. An earthquake measures 3 on this scale. Would it be recorded by a seismograph? Is it likely to cause much damage?

The device used to measure the destructive energy of an earthquake is called a Richter Scale. Yes, it would be recorded by a seismograph. No, a 3 magnitude earthquake is unlikely to cause much damage.

Suggest three measures to protect ourselves from lightning.

Three measures of protection from lightning are:

Describe with the help of a diagram an instrument which can be used to detect a charged body.

An electroscope is a device that is used to detect electric charge. 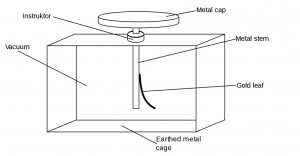 List three states in India where earthquakes are more likely to strike.

Earthquakes are most likely to occur in  Jammu and Kashmir, Gujarat and Assam.

Suppose you are outside your home and an earthquake strikes. What

precaution would you take to protect yourself?

The precautions to take when an earthquake occurs and we are outside are:

The weather department has predicted that a thunderstorm is likely to occur on a certain day. Suppose you have to go out on that day. Would you carry an umbrella? Explain.

Electric charge: Electric charge is basic property of matter that causes it experience a force when kept in an electromagnetic field.

Electroscope: Electroscope is a scientific instrument that is used to measure the presence of electric charge on a body by observing the deflection in the gold leaves placed inside

Earthing: The process of transferring of the charge from a charged body to the ground is known as earthing. It is done to protect us from any leakage of electrical current.

Earthquake: Earthquake is the sudden shaking of the surface of the earth that results due to the release of the seismic waves in the lithosphere of the earth.

Seismic zones: The weak zones of the plates of the earth where the earthquakes are most likely to occur are known as the seismic or fault zones.

Seismograph: Seismograph is device that is used to detect the seismic waves taking place under the surface of the earth.