NCERT Solutions for Class 8 Science Chapter 12-Friction, contains solutions to various questions in Exercise for Chapter 12.  At the end of the Solutions, all the keywords and Notes which are important to understand Science Chapter 12-Friction, have been explained in a simple and easy to understand manner. We are providing NCERT Solutions for Class 8 all subjects which can be accessed by clicking here. 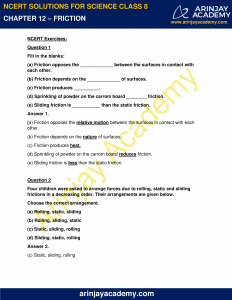 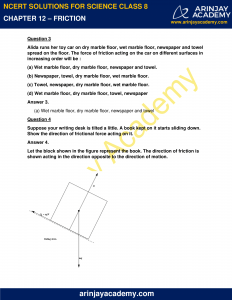 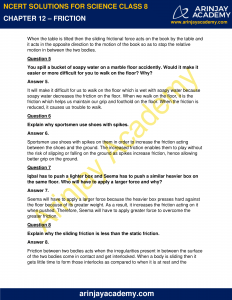 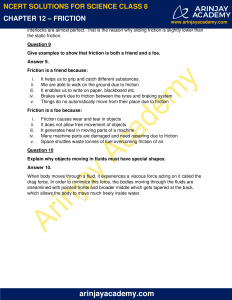 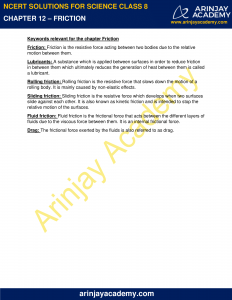 NCERT Solutions for Class 8 Science Chapter 12 Friction, Exercises includes –Fill in the blanks, Choose the correct option and Questions/ Answers  which helps you to understand the topic covered in Friction Class 8, in a better manner to help you to score good marks in your examinations.

(a) Friction opposes the _______ between the surfaces in contact with each other.

(d) Sprinkling of powder on the carrom board ______ friction.

(a) Friction opposes the relative motion between the surfaces in contact with each other.

(b) Friction depends on the nature of surfaces.

(d) Sprinkling of powder on the carrom board reduces friction.

(e) Sliding friction is less than the static friction.

Four children were asked to arrange forces due to rolling, static and sliding frictions in a decreasing order. Their arrangements are given below.

Alida runs her toy car on dry marble floor, wet marble floor, newspaper and towel spread on the floor. The force of friction acting on the car on different surfaces in increasing order will be :

Suppose your writing desk is tilted a little. A book kept on it starts sliding down. Show the direction of frictional force acting on it. 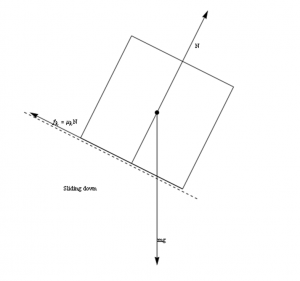 When the table is tilted then the sliding frictional force acts on the book by the table and it acts in the opposite direction to the motion of the book so as to stop the relative motion in between the two bodies.

You spill a bucket of soapy water on a marble floor accidently. Would it make it easier or more difficult for you to walk on the floor? Why?

Explain why sportsmen use shoes with spikes.

Sportsmen use shoes with spikes on them in order to increase the friction acting between the shoes and the ground. The increased friction enables them to play without the risk of slipping or falling on the ground as spikes increase friction, hence allowing better grip on the ground.

Iqbal has to push a lighter box and Seema has to push a similar heavier box on the same floor. Who will have to apply a larger force and why?

Explain why the sliding friction is less than the static friction.

Friction between two bodies acts when the irregularities present in between the surface of the two bodies come in contact and get interlocked. When a body is sliding then it gets little time to form those interlocks as compared to when it is at rest and the interlocks are almost perfect. That is the reason why sliding friction is slightly lower than the static friction.

Give examples to show that friction is both a friend and a foe.

Friction is a friend because:

Friction is a foe because:

Explain why objects moving in fluids must have special shapes.

When body moves through a fluid, it experiences a viscous force acting on it called the drag force. In order to minimize this force, the bodies moving through the fluids are streamlined with pointed fronts and broader middle which gets tapered at the back, which allows the body to move much freely inside water.

Friction: Friction is the resistive force acting between two bodies due to the relative motion between them.

Lubricants: A substance which is applied between surfaces in order to reduce friction in between them which ultimately reduces the generation of heat between them is called a lubricant.

Sliding friction: Sliding friction is the resistive force which develops when two surfaces slide against each other. It is also known as kinetic friction and is intended to stop the relative motion of the surfaces.

Drag: The frictional force exerted by the fluids is also referred to as drag.