NCERT Solutions for Class 8 Science Chapter 10 – Reaching the Age of Adolescence, contains solutions to various questions in Exercise for Chapter 10.  At the end of the Solutions, all the keywords and Notes which are important to understand Science Chapter 10 – Reaching the Age of Adolescence, have been explained in a simple and easy to understand manner. We are providing NCERT Solutions for Class 8 all subjects which can be accessed by clicking here. 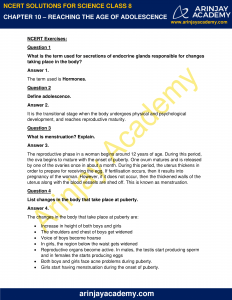 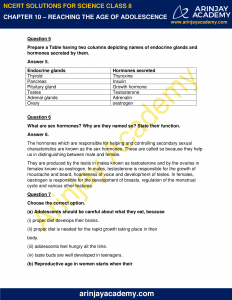 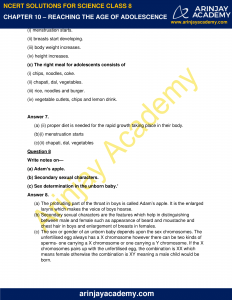 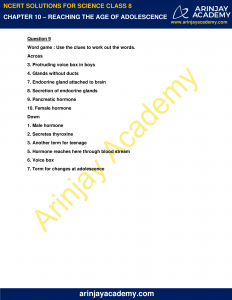 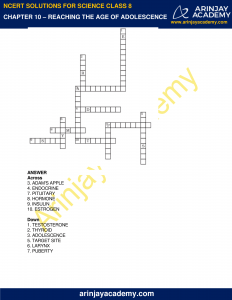 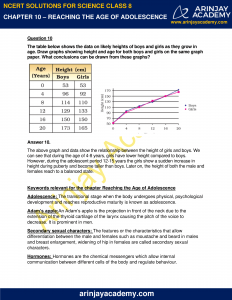 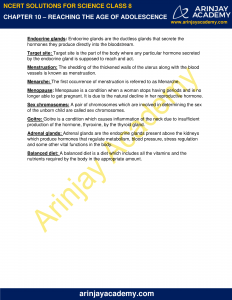 What is the term used for secretions of endocrine glands responsible for changes taking place in the body?

The term used is Hormones.

It is the transitional stage when the body undergoes physical and psychological development, and reaches reproductive maturity.

What is menstruation? Explain.

The reproductive phase in a woman begins around 12 years of age. During this period, the ova begins to mature with the onset of puberty. One ovum matures and is released by one of the ovaries once in about a month. During this period, the uterus thickens in order to prepare for receiving the egg. If fertilisation occurs, then it results into pregnancy of the woman. However, if it does not occur, then the thickened walls of the uterus along with the blood vessels are shed off. This is known as menstruation.

List changes in the body that take place at puberty.

The changes in the body that take place at puberty are:

Prepare a Table having two columns depicting names of endocrine glands and hormones secreted by them.

What are sex hormones? Why are they named so? State their function.

The hormones which are responsible for helping and controlling secondary sexual characteristics are known as the sex hormones. These are called so because they help us in distinguishing between male and female.

(a) Adolescents should be careful about what they eat, because

(i) proper diet develops their brains.

(ii) proper diet is needed for the rapid growth taking place in their body.

(b) Reproductive age in women starts when their

(c) The right meal for adolescents consists of

(a) (ii) proper diet is needed for the rapid growth taking place in their body.

(b) (i) menstruation starts

(a) The protruding part of the throat in boys is called Adam’s apple. It is the enlarged larynx which makes the voice of boys hoarse.

(b) Secondary sexual characters are the features which help in distinguishing between male and female such as appearance of beard and moustache and chest hair in boys and enlargement of breasts in females.

Word game : Use the clues to work out the words.

3.Another term for teenage

7.Term for changes at adolescence 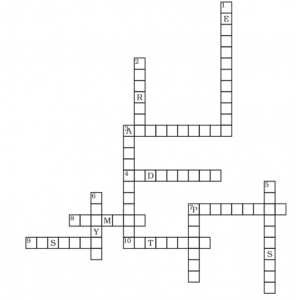 The table below shows the data on likely heights of boys and girls as they grow in age. Draw graphs showing height and age for both boys and girls on the same graph paper. What conclusions can be drawn from these graphs?

The above graph and data show the relationship between the height of girls and boys. We can see that during the age of 4-8 years, girls have lower height compared to boys. However, during the adolescent period 12-15 years the girls show a sudden increase in height during puberty and become taller than boys. Later on, the height of both the male and females reach to a balanced state.

Adolescence: The transitional stage when the body undergoes physical, psychological development and reaches reproductive maturity is known as adolescence.

Adam’s apple:An Adam’s apple is the projection in front of the neck due to the extension of the thyroid cartilage of the larynx causing the pitch of the voice to decrease. It is prominent in men.

Hormones: Hormones are the chemical messengers which allow internal communication between different cells of the body and regulate behaviour.

Target site: Target site is the part of the body where any particular hormone secreted by the endocrine gland is supposed to reach and act.

Menstruation: The shedding of the thickened walls of the uterus along with the blood vessels is known as menstruation.

Menarche: The first occurrence of menstruation is referred to as Menarche.

Menopause: Menopause is a condition when a woman stops having periods and is no longer able to get pregnant. It is due to the natural decline in her reproductive hormone.

Goitre: Goitre is a condition which causes inflammation of the neck due to insufficient production of the hormone, thyroxine, by the thyroid gland.

Adrenal glands: Adrenal glands are the endocrine glands present above the kidneys which produce hormones that regulate metabolism, blood pressure, stress regulation and some other vital functions in the body.

Balanced diet: A balanced diet is a diet which includes all the vitamins and the nutrients required by the body in the appropriate amount.