NCERT Solutions for Class 10 Geography Chapter 7 – Lifelines of National Economy (Social Science), contains solutions to various questions in Exercise for Chapter 7.  At the end of the Solutions, all the keywords which are important to understand Chapter 7 Lifelines of National Economy Class 10 Geography, have been explained in a simple and easy to understand manner. We are providing NCERT Solutions for Class 10 all subjects which can be accessed by clicking here. 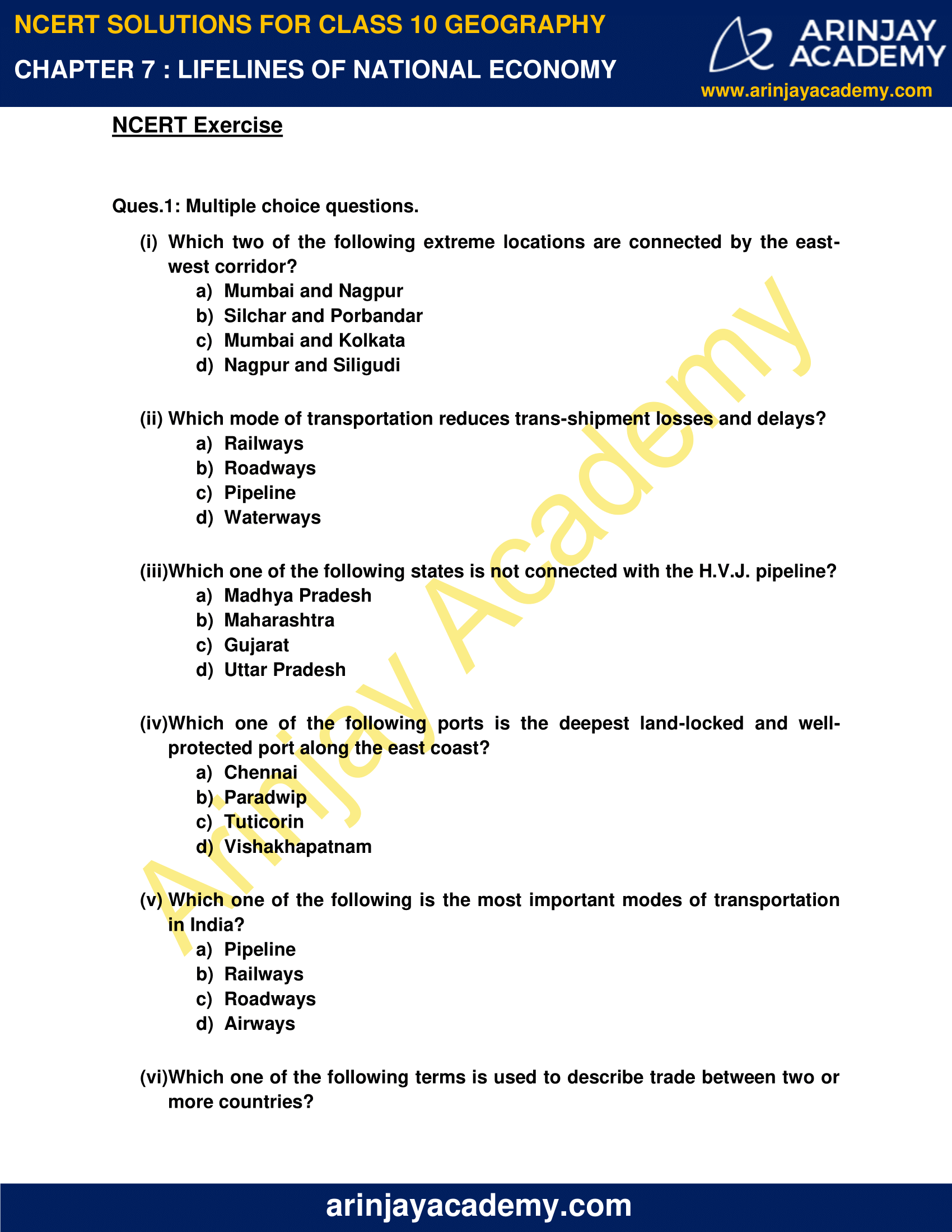 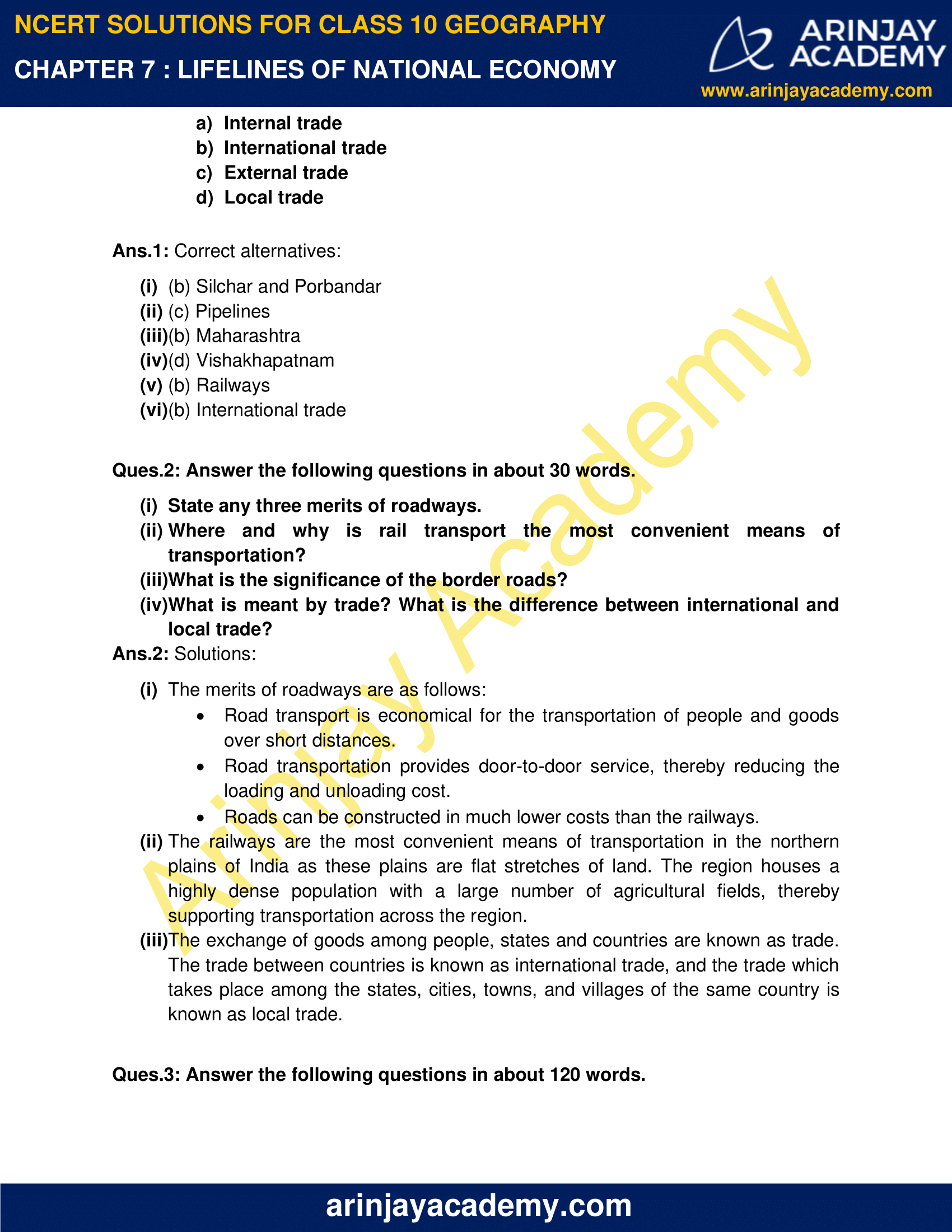 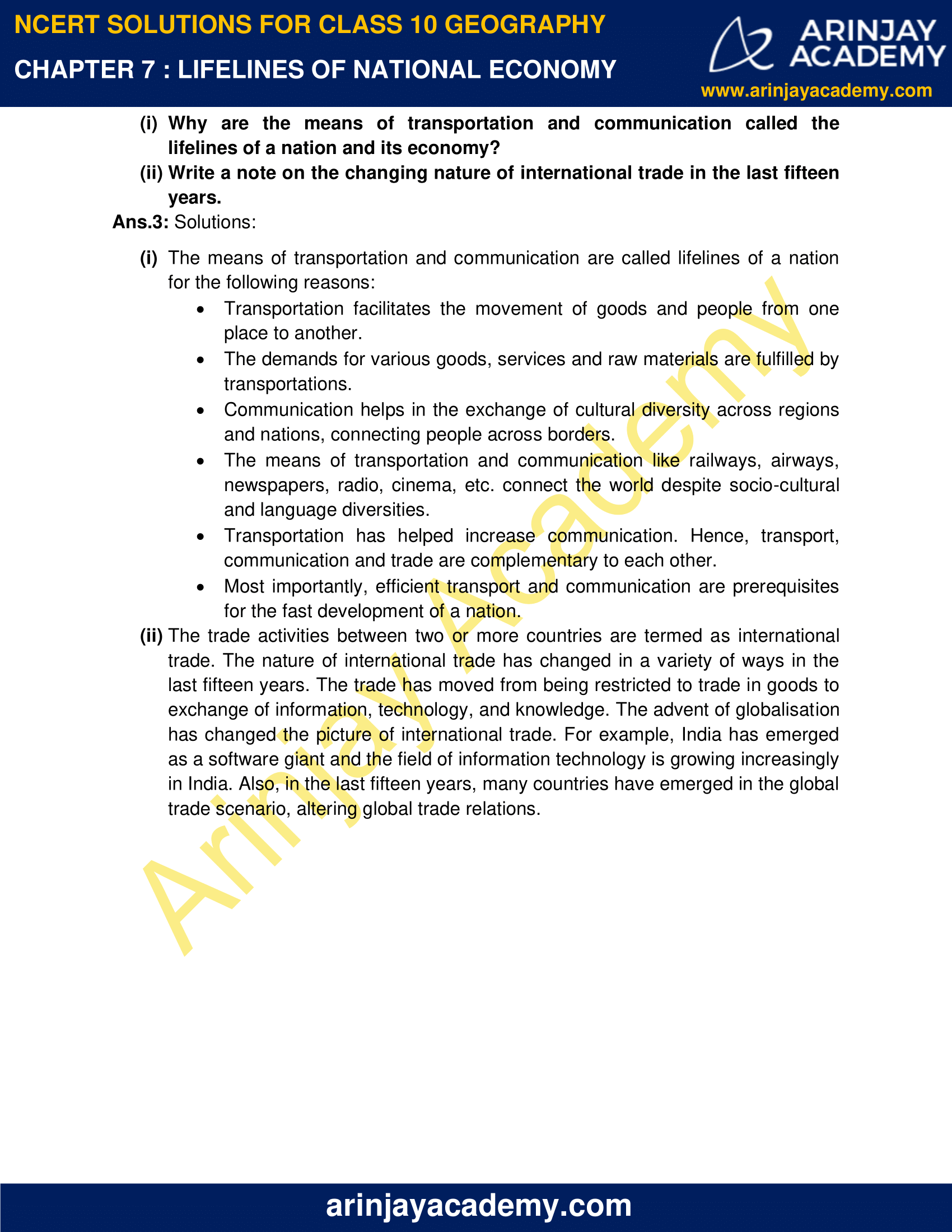 (i) Which two of the following extreme locations are connected by the east-west corridor?

(ii) Which mode of transportation reduces trans-shipment losses and delays?

(iii) Which one of the following states is not connected with the H.V.J. pipeline?

(iv) Which one of the following ports is the deepest land-locked and well-protected port along the east coast?

(v) Which one of the following is the most important modes of transportation in India?

(vi) Which one of the following terms is used to describe trade between two or more countries?

Ques.2: Answer the following questions in about 30 words.

(i) State any three merits of roadways.
(ii) Where and why is rail transport the most convenient means of transportation?
(iii) What is the significance of the border roads?
(iv) What is meant by trade? What is the difference between international and local trade?

(i) The merits of roadways are as follows:

(ii) The railways are the most convenient means of transportation in the northern plains of India as these plains are flat stretches of land. The region houses a highly dense population with a large number of agricultural fields, thereby supporting transportation across the region.

(iii) The exchange of goods among people, states and countries are known as trade. The trade between countries is known as international trade, and the trade which takes place among the states, cities, towns, and villages of the same country is known as local trade.

(i) Why are the means of transportation and communication called the lifelines of a nation and its economy?

(ii) Write a note on the changing nature of international trade in the last fifteen years.

(i) The means of transportation and communication are called lifelines of a nation for the following reasons:

(ii) The trade activities between two or more countries are termed as international trade. The nature of international trade has changed in a variety of ways in the last fifteen years. The trade has moved from being restricted to trade in goods to exchange of information, technology, and knowledge. The advent of globalisation has changed the picture of international trade. For example, India has emerged as a software giant and the field of information technology is growing increasingly in India. Also, in the last fifteen years, many countries have emerged in the global trade scenario, altering global trade relations.