NCERT Solutions for Class 10 Geography Chapter 1 – Resources and Development (Social Science), contains solutions to various questions in Exercise for Chapter 1.  At the end of the Solutions, all the keywords which are important to understand Chapter 1 Resources and Development Class 10 Geography, have been explained in a simple and easy to understand manner. We are providing NCERT Solutions for Class 10 all subjects which can be accessed by clicking here. 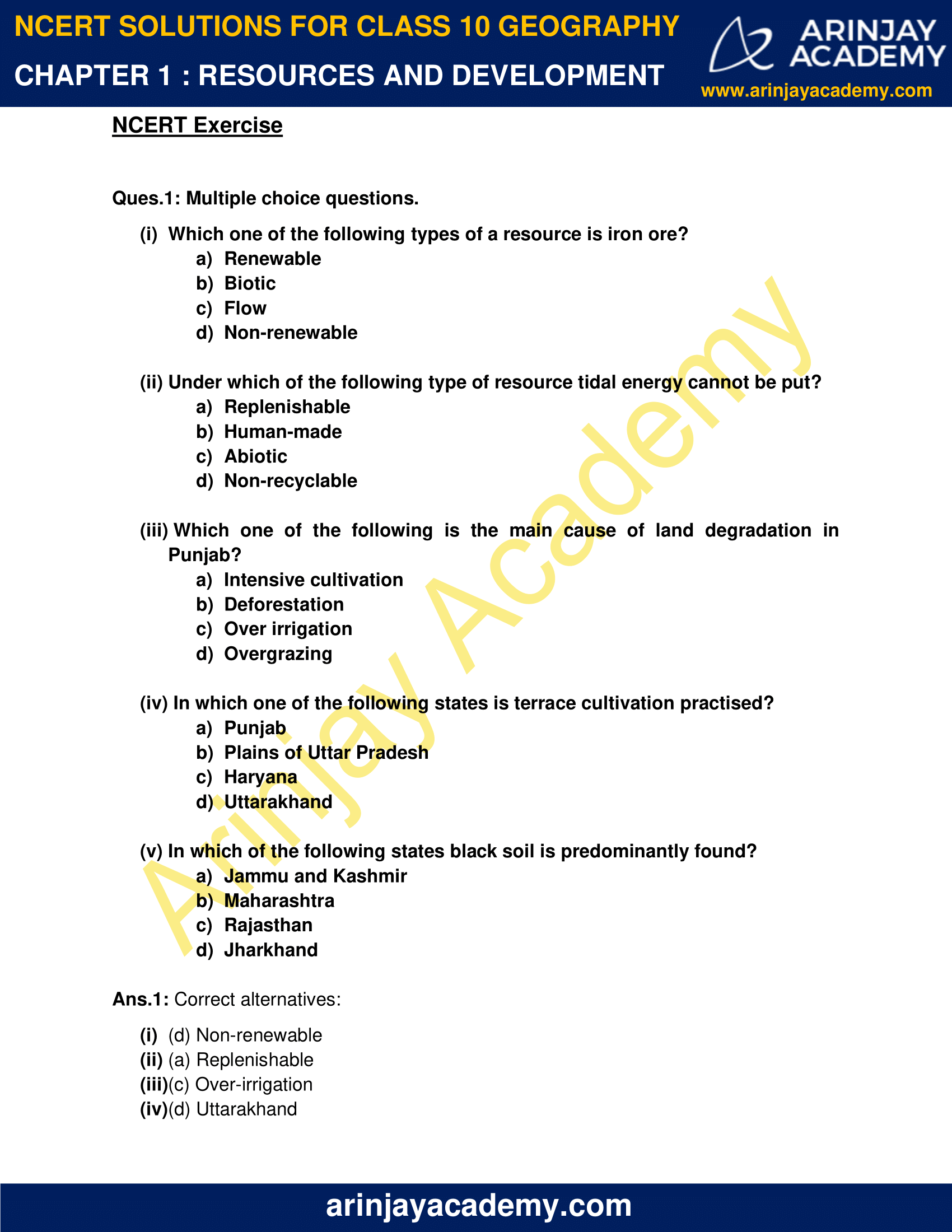 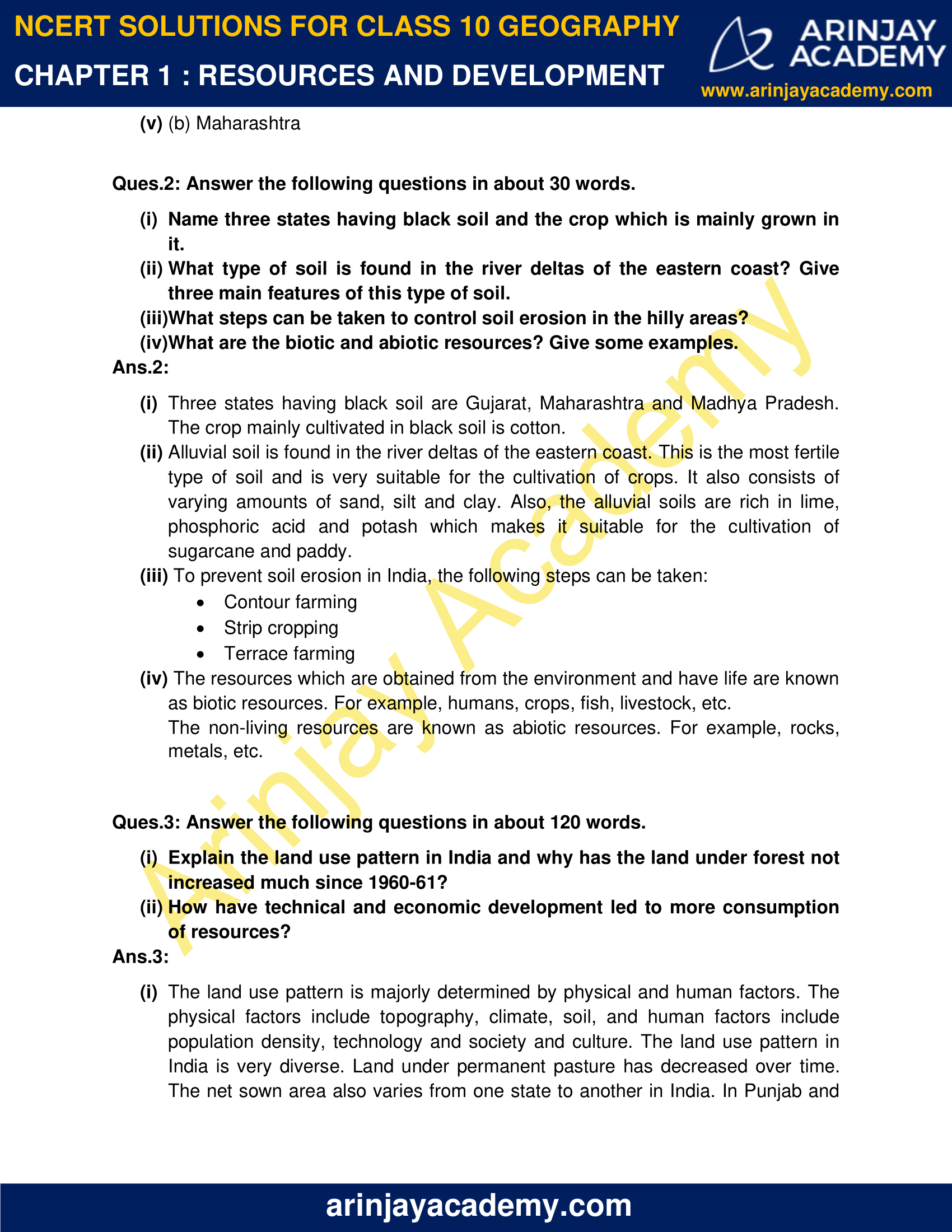 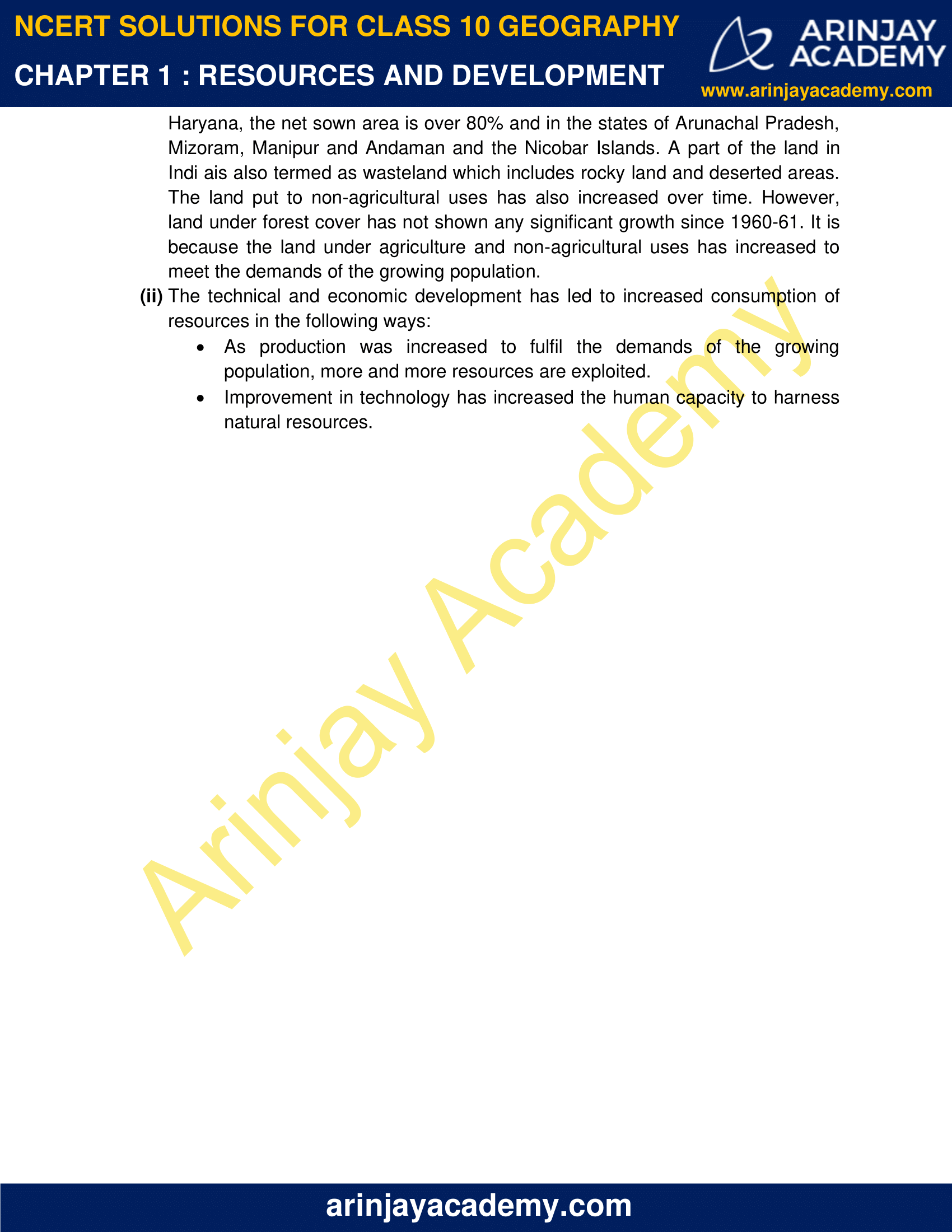 (i) Which one of the following types of a resource is iron ore?

(ii) Under which of the following type of resource tidal energy cannot be put?

(iii) Which one of the following is the main cause of land degradation in Punjab?

(a) Intensive cultivation
(b) Deforestation
(c) Over irrigation
(d) Overgrazing

(iv) In which one of the following states is terrace cultivation practised?

(v) In which of the following states black soil is predominantly found?

(a) Jammu and Kashmir
(b) Maharashtra
(c) Rajasthan
(d) Jharkhand

Ques.2: Answer the following questions in about 30 words.

(i) Name three states having black soil and the crop which is mainly grown in it.

(ii) What type of soil is found in the river deltas of the eastern coast? Give three main features of this type of soil.

(iii) What steps can be taken to control soil erosion in the hilly areas?

(iv) What are the biotic and abiotic resources? Give some examples.

(i) Three states having black soil are Gujarat, Maharashtra and Madhya Pradesh. The crop mainly cultivated in black soil is cotton.

(ii) Alluvial soil is found in the river deltas of the eastern coast. This is the most fertile type of soil and is very suitable for the cultivation of crops. It also consists of varying amounts of sand, silt and clay. Also, the alluvial soils are rich in lime, phosphoric acid and potash which makes it suitable for the cultivation of sugarcane and paddy.

(iii) To prevent soil erosion in India, the following steps can be taken:

(i) Explain the land use pattern in India and why has the land under forest not increased much since 1960-61?

(ii) How have technical and economic development led to more consumption of resources?

(i) The land use pattern is majorly determined by physical and human factors. The physical factors include topography, climate, soil, and human factors include population density, technology and society and culture. The land use pattern in India is very diverse. Land under permanent pasture has decreased over time. The net sown area also varies from one state to another in India. In Punjab and Haryana, the net sown area is over 80% and in the states of Arunachal Pradesh, Mizoram, Manipur and Andaman and the Nicobar Islands. A part of the land in Indi ais also termed as wasteland which includes rocky land and deserted areas. The land put to non-agricultural uses has also increased over time. However, land under forest cover has not shown any significant growth since 1960-61. It is because the land under agriculture and non-agricultural uses has increased to meet the demands of the growing population.

(ii) The technical and economic development has led to increased consumption of resources in the following ways:

Resource: The things available in our environment that can be used to satisfy our needs is a resource. A resource is technologically accessible, economically feasible and culturally acceptable.

Biotic: The resources which are obtained from the environment and have life are known as biotic resources.

Abiotic: The non-living resources are known as abiotic resources

Renewable: These resources can be renewed by a physical, chemical or mechanical process.

Non-renewable: These resources take a long time to replenish themselves. These take nearly a million years to rejuvenate.

Soil erosion: The removal of topsoil is known as soil erosion.