NCERT Solutions for Class 10 Geography Chapter 4 – Agriculture (Social Science), contains solutions to various questions in Exercise for Chapter 4.  At the end of the Solutions, all the keywords which are important to understand Chapter 4 Agriculture Class 10 Geography, have been explained in a simple and easy to understand manner. We are providing NCERT Solutions for Class 10 all subjects which can be accessed by clicking here. 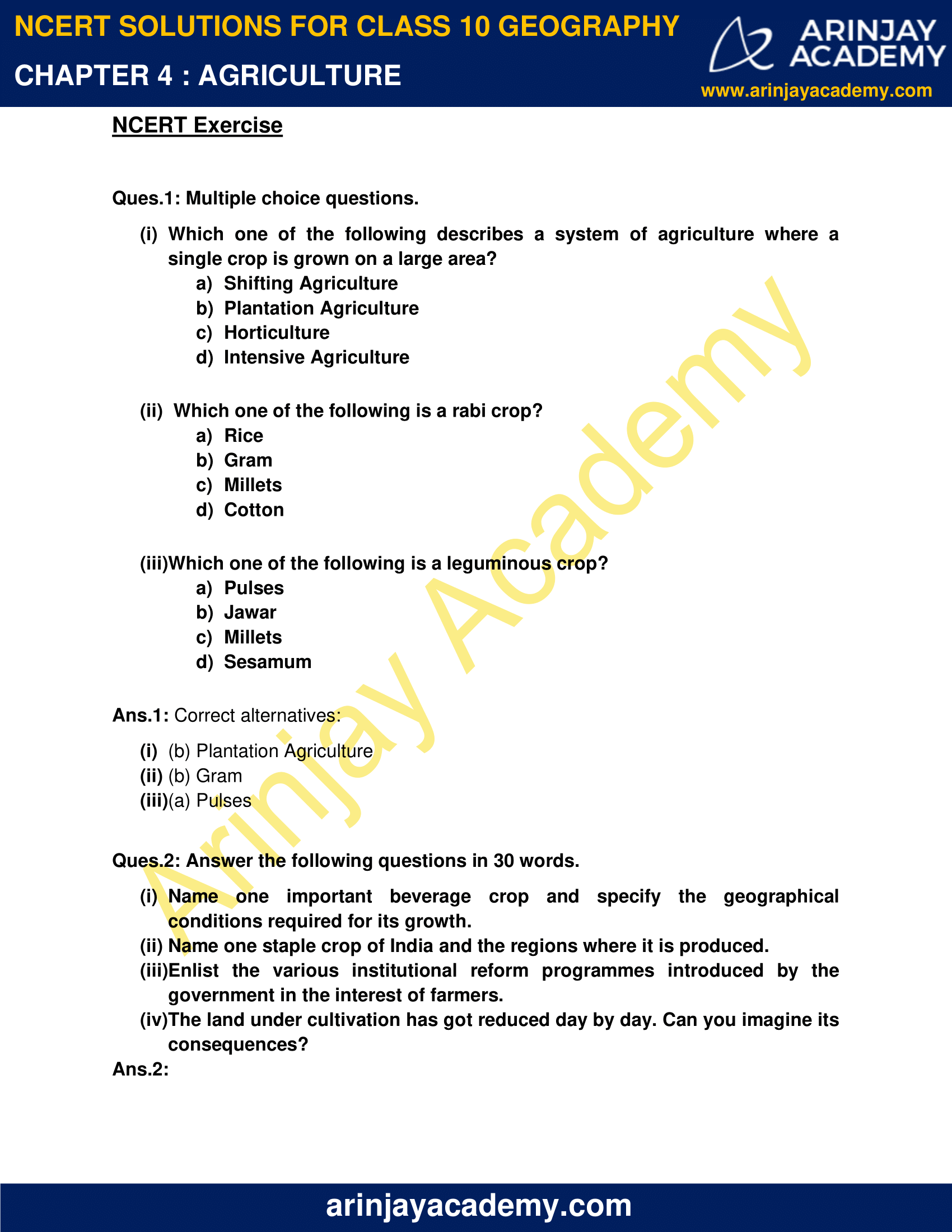 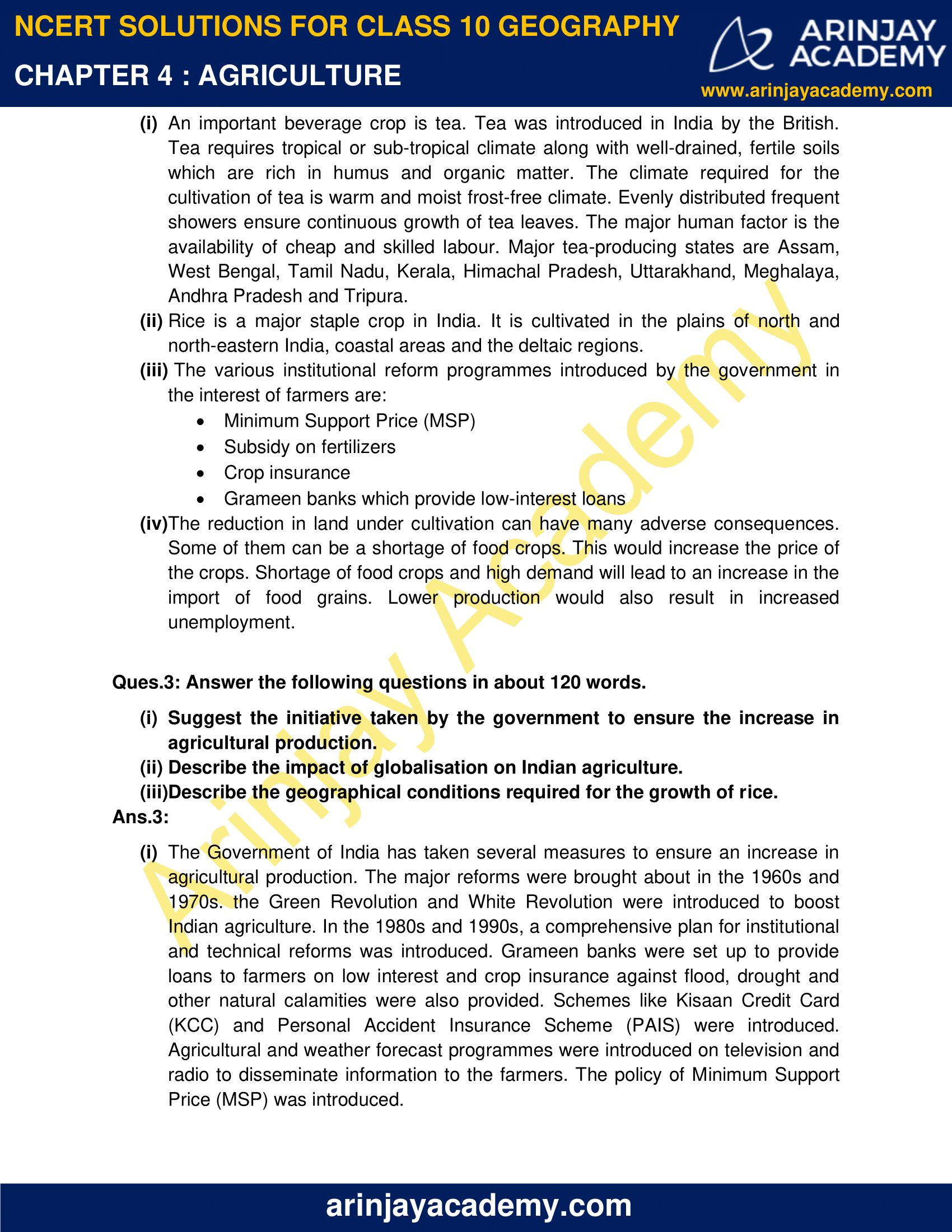 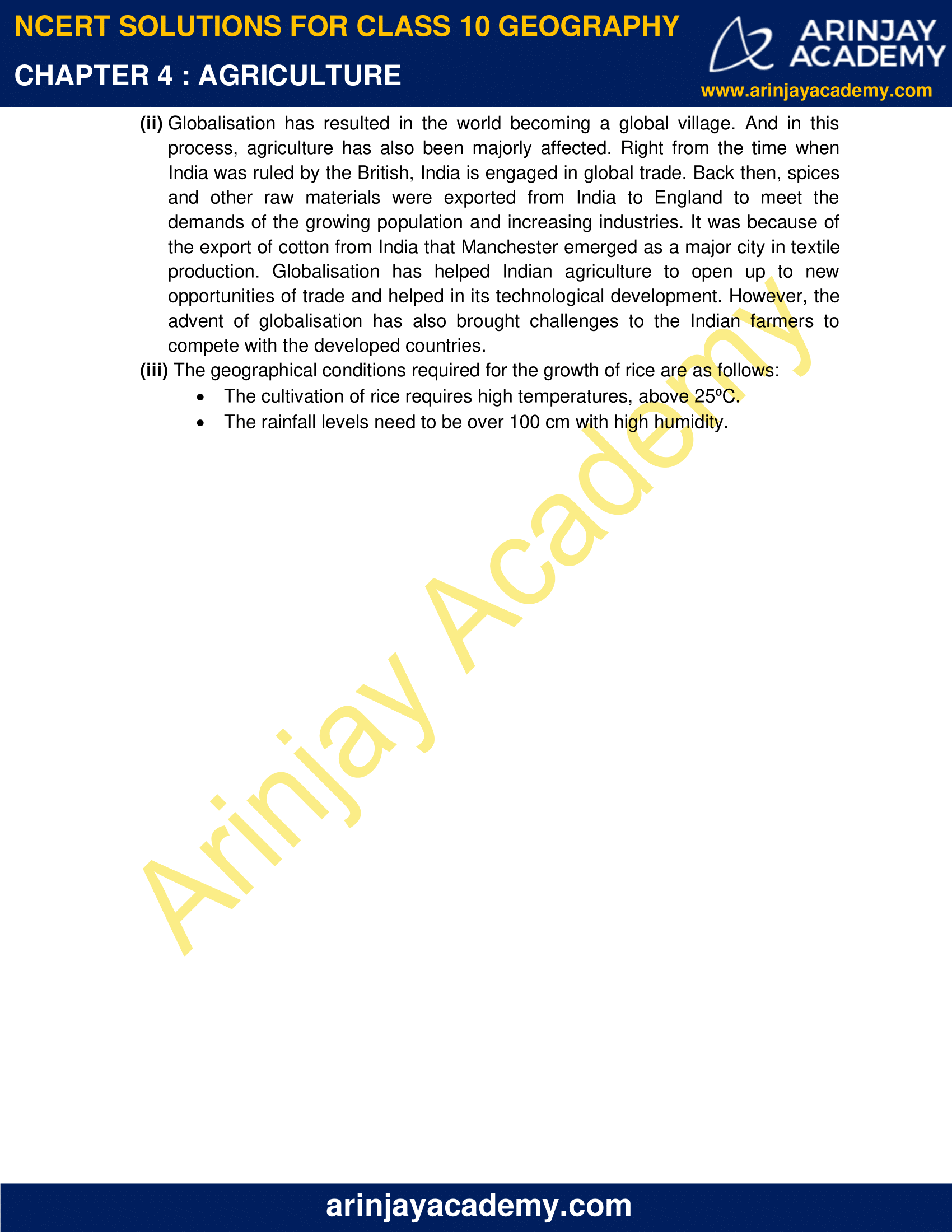 (i) Which one of the following describes a system of agriculture where a single crop is grown on a large area?

(ii) Which one of the following is a rabi crop?

(iii) Which one of the following is a leguminous crop?

(i) Name one important beverage crop and specify the geographical conditions required for its growth.

(ii) Name one staple crop of India and the regions where it is produced.

(iii) Enlist the various institutional reform programmes introduced by the government in the interest of farmers.

(iv) The land under cultivation has got reduced day by day. Can you imagine its consequences?

(i) An important beverage crop is tea. Tea was introduced in India by the British. Tea requires tropical or sub-tropical climate along with well-drained, fertile soils which are rich in humus and organic matter. The climate required for the cultivation of tea is warm and moist frost-free climate. Evenly distributed frequent showers ensure continuous growth of tea leaves. The major human factor is the availability of cheap and skilled labour. Major tea-producing states are Assam, West Bengal, Tamil Nadu, Kerala, Himachal Pradesh, Uttarakhand, Meghalaya, Andhra Pradesh and Tripura.

(ii) Rice is a major staple crop in India. It is cultivated in the plains of north and north-eastern India, coastal areas and the deltaic regions.

(iii) The various institutional reform programmes introduced by the government in the interest of farmers are:

(iv) The reduction in land under cultivation can have many adverse consequences. Some of them can be a shortage of food crops. This would increase the price of the crops. Shortage of food crops and high demand will lead to an increase in the import of food grains. Lower production would also result in increased unemployment.

(i) Suggest the initiative taken by the government to ensure the increase in agricultural production.

(ii) Describe the impact of globalisation on Indian agriculture.

(iii) Describe the geographical conditions required for the growth of rice.

(i) The Government of India has taken several measures to ensure an increase in agricultural production. The major reforms were brought about in the 1960s and 1970s. the Green Revolution and White Revolution were introduced to boost Indian agriculture. In the 1980s and 1990s, a comprehensive plan for institutional and technical reforms was introduced. Grameen banks were set up to provide loans to farmers on low interest and crop insurance against flood, drought and other natural calamities were also provided. Schemes like Kisaan Credit Card (KCC) and Personal Accident Insurance Scheme (PAIS) were introduced. Agricultural and weather forecast programmes were introduced on television and radio to disseminate information to the farmers. The policy of Minimum Support Price (MSP) was introduced.

(ii) Globalisation has resulted in the world becoming a global village. And in this process, agriculture has also been majorly affected. Right from the time when India was ruled by the British, India is engaged in global trade. Back then, spices and other raw materials were exported from India to England to meet the demands of the growing population and increasing industries. It was because of the export of cotton from India that Manchester emerged as a major city in textile production. Globalisation has helped Indian agriculture to open up to new opportunities of trade and helped in its technological development. However, the advent of globalisation has also brought challenges to the Indian farmers to compete with the developed countries.

(iii) The geographical conditions required for the growth of rice are as follows:

Rabi: This cropping season lasts from October to June. The crops are sown in October-December and harvested in April-June.

Kharif: These crops are sown with the onset of monsoon and harvested in September-October.

Zaid: This is a short cropping season between rabi and Kharif seasons.

Globalisation: The linking of the world with the advent of technology.